I’ve read on discord that there were some known problems with the sales model, but after quick discussion it we were not sure if those were supposed to be fixed in 4.1.7 or not. As I could observe some strange behaviour, I. thought it would be better to just report it.

The problem is that a car seems to be selling to the markets it shouldn’t be selling. I designed a small simple sports car in 1946 (released in 1949). As expected it was completely not competitive outside of the sport markets (difficulty 150%, Fruinia start). Despite that, it was mostly generating the revenue from “delivery” markets, with strong sales in basically ALL segments. 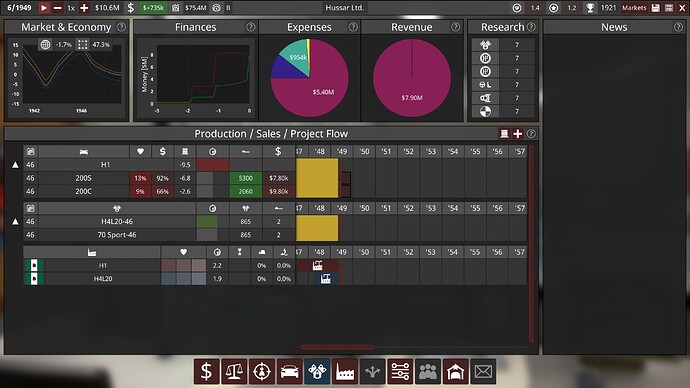 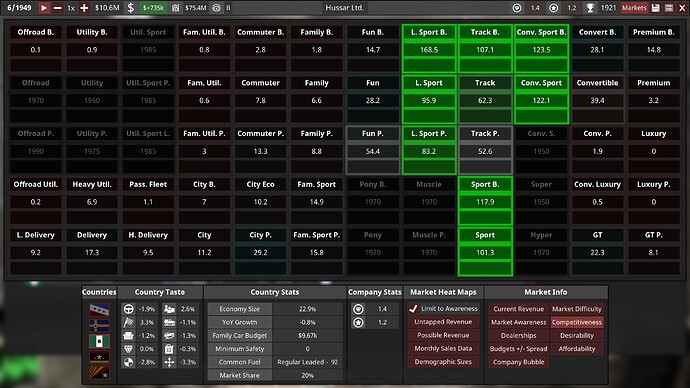 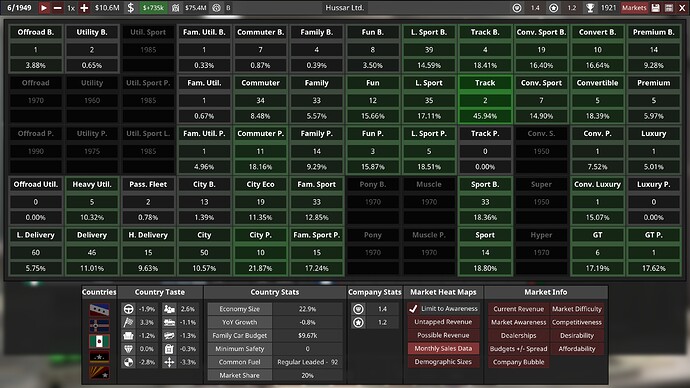 Something is not right here

Maybe as someone suggested on the discord, it’s because markets are not saturated, and as long as car has four wheels and it’s moving, is going to be selling?

I’ve noticed this as well and today investigated what is going on. Probably a really simple fix. Cheers!

Unfortunately there are still some bugs, even in the 4.1.9 version. Same savegame as above: 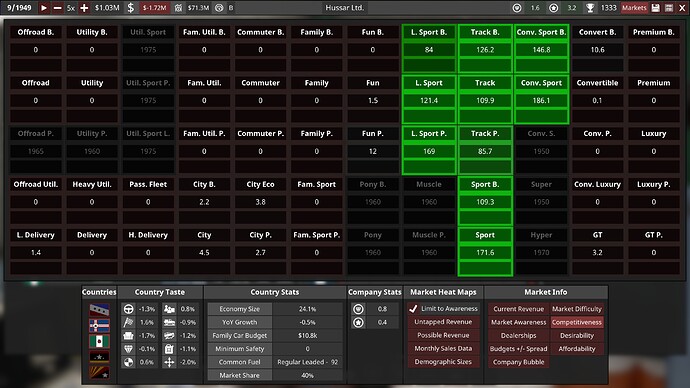 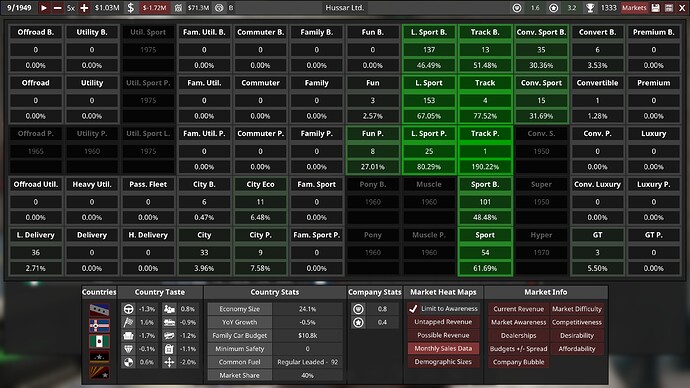 More over I’ve noticed a couple of more issues. This is a different save game. The same problem as above is also visible here, this time with the Premium market: 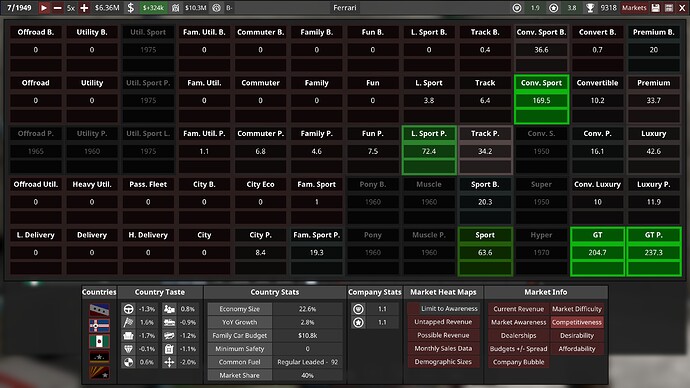 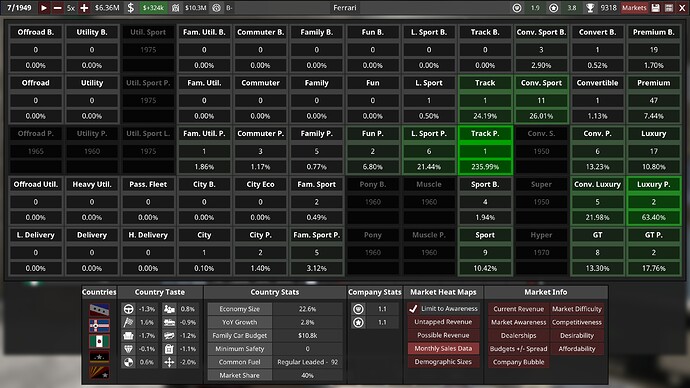 I don’t know what are those desirability ratios coming from… However I suspect they are connected to this sales bug from above:

Screenshot was taken with the default settings for the forecast, with expected awareness set to 14%. But I’m making money right now. With my current market awareness of 5.2%-6%. With factory working at the maximum number of shifts, yet forecast is telling me this:

Thanks for point all that out!
A fair bit of the remaining issues you see here in 4.1.9 is very intentional though and it seems like you’re not quite understanding the mechanics right (well, the game doesn’t explain it either).
Competitiveness is basically Desirability times Affordability. So if you have a car with 100 desirability but 10% Affordability, your Competitiveness is just 10, and you would say there should be no sales or almost no sales.
That is NOT correct though, because to the 10% that can afford the car, it is a really good choice! That is the case in the “Premium” example you show above.

Are you sure this is the case? I was thinking about this, especially after seeing the Premium sales. But:

I quickly grabbed a couple of more screenshots trying to understand this (all from my second example). 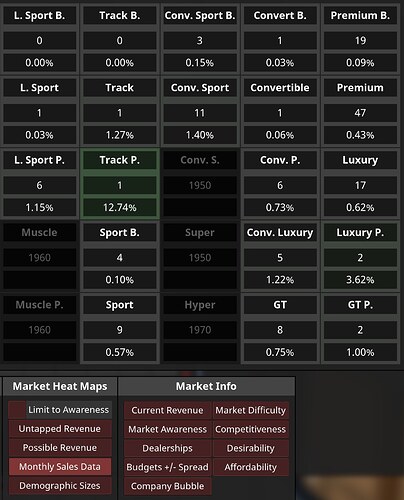 ^^^ sales not limited to the awareness. You can see what I was trying to explain in the previous post. I had 0.43% of Premium market, which is surprisingly high compared to 0.75% of the GT market, given the competitiveness. More over, I have 0.62% of Luxury market and 3.62% of Luxury Premium (Lux P. might be a fluke, as there were just two sales), where you can not explain this with too high price. Budgets of Luxury/Luxury Premium are above GT’s budget: 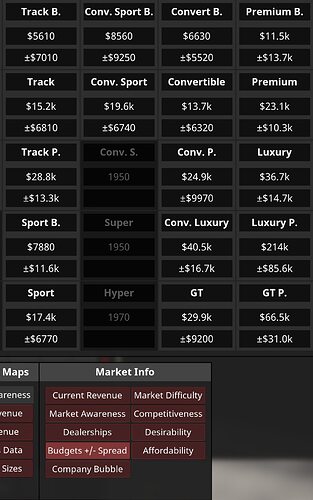 About the desirability and affordability: 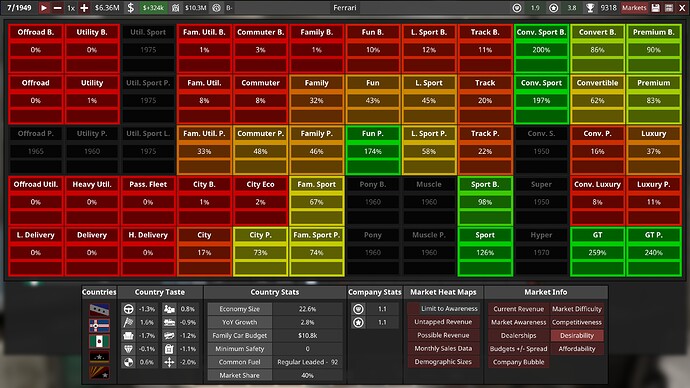 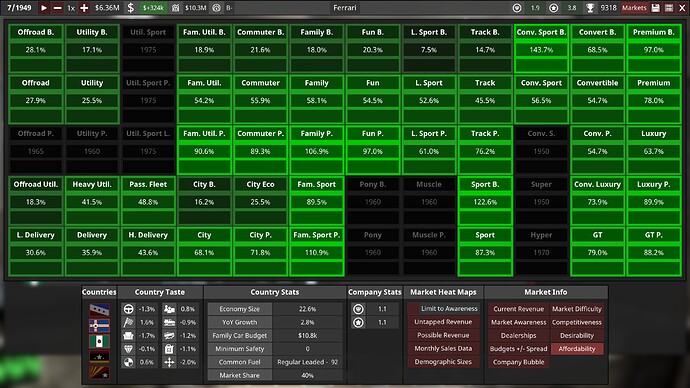 37% desirability in the Luxury vs 83% in Premium also seems strange, but could be plausible.

That last one may actually be budget-related - buyers in the luxury car market want an interior even more lavish and upmarket than what is expected in the premium category.