Hey guys, first time posting on here. I am really enjoying the game - it is the perfect amount of challenging!

Anyway, has anyone beaten the “Insane” 4-cylinder scenario? I am able to meet dimensional, cost, noise and power requirements, but I am a factor of 2 off of economy and reliability! I have even tried de-tuning to the spec and can not meet the MTBF!

This may be a noob question - but I see my turbine flashing during my test mode - is this turbine overspeeding or a temperature issue?

One hint: Not using turbos will make it easier for you (I don’t know if you should able to select turbos at all).

Which game build are you running? In the current public version the size limit is bugged and the scenario is really hard to do (more than “insane”). The open beta version of the next update has the limits fixed.

Woah, I wouldn’t think it is possible to make 83 HP at 3000 RPM with the dimensional requirements without turbos!

As I said, it is nearly impossible in the current public build. Use the manually downloadable open beta if you want to play this scenario.

Understood. I am torrenting the beta now, Thanks!

Definitely much easier in the beta. I only got gold so far (1082 score) with an N/A setup.

The one thing I did like on the “broken” version where I decided to go turbo was having to play around with turbine/compressor matching to get the engine to spool below 3000 rpm. I was able to build ~27psi!. It was kind of a neat application to make a turbo genset! haha.

ive bought the supercharged version of the game but no superchargers only turbos??? still in the making or???

ive bought the supercharged version of the game but no superchargers only turbos??? still in the making or???

Weird. I found this scenario quite easy tbh. Made it OHV and used the fuel saving pistons, tuned it up a bit and made 79.4HP, cheap and durable.

Built this up in about 15 minutes.

I’ll be honest, i’m a bit dissapointed with the difficulty of this one. Thought it’d be much harder.
I don’t know, maybe i got lucky?

Finding the extra points for platinum and higher though, that’s a challenge! 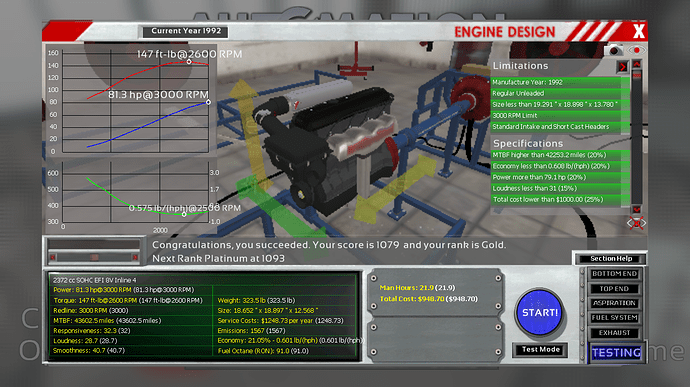 I’m guessing this mission has been fixed between 1198 and 1323, since platinum is definitely possible here. 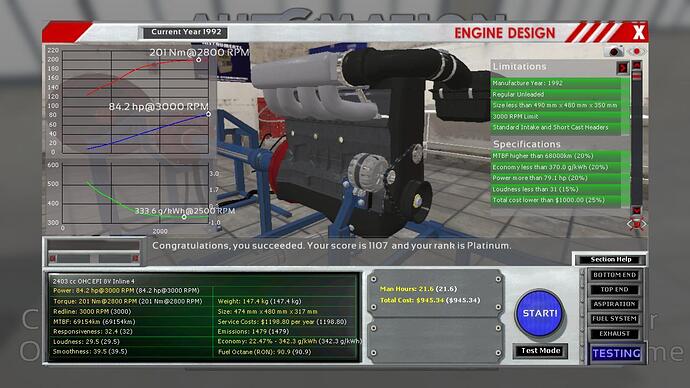 I’m guessing this mission has been fixed between 1198 and 1323, since platinum is definitely possible here.

Yes, the maximum size was hugely increased. I believe it was something like 300mm x 350mm x 300mm before the update