I made a 1000 HP engine with quit good MTBF and not that bad economy. If you have an idea on how to make it better just let me now. 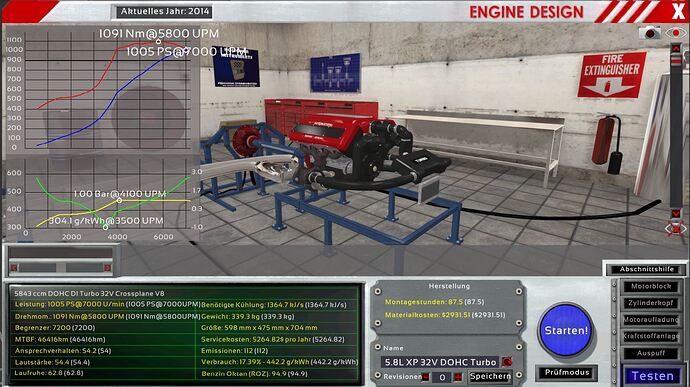 Only things I could suggest is I think you have a race intake you can lower service costs and raise mtbf even more if you can switch to a performance one instead. And try to rev a few hundred more rpms past peak power. Aside from those rather minor suggestions that’s a very well made feasible engine.

It’s a performance intake. Nevertheless, a standard intake will save you some service costs.

when i increase the revs the MTBF goes down quiet quickly and i gain no power, but the standart intake is a good idea

You won’t gain power, but the power band will be more useable. Try smaller stroke and more revs, that should keep the MTBF constant.

The reason you want your max rpm slightly past your max power is that when you shift up, your rpm falls into greater power. If the power line was completely straight, and your max power was say 500 hp, and 200 rpm later you are at 450 and 800 rpm earlier you are at 450, you would want to shift from 450 to 450 because you would have the maximum power for the greatest amount of time. Thus why a close ratio gearbox is good for acceleration, as your power climbs to 500 and only drops to 450 when you shift up, instead of perhaps 400 and having to build up steam all over again.