A comprehensive analysis and guide of the downforce on Automation cars exported to BeamNG.drive

How is downforce exported from Automation to BeamNG.drive? A comprehensive study

The following seeks to go into a brief, but robust analysis of three key factors in the aerodinamic characteristics of BeamNG.drive car mods generated with the Automation car exporter.

The three key factors aforementioned are: Car body, fixture type and placement and size of fixture. Other factors have partially been reviewed and not having been deemed relevant.

The findings have been as close to scientifically collected as possible, and informative visual data provided in addition to the parameters for each individual experiment.

The findings can be summarised into the following:

Car body: The Longer the car, the further in back the downforce and vice versa

The relative length of the overhang in front of the front wheels relative to the overall lenght of the car is the biggest factor in how much the mean downforce is shifted to the front. So: Short and long front overhang: mean downforce of body further to the front; Long and short front overhang: mean fownforce of body further to the back.

Solely fixtures from the ‘wing’ tab have been found to generate any mesurable impact on aerodynamic properties like downforce. But from these ‘wing’ fixtures does everyone have a mesurable, if from individual fixture to fixture varied, function.

Placement and size of fixture: As to be intuitively expected

The downforce effect is applied at the far corners of the fixture. This means neither orientation nor specific miscellanious shape of the wing have any effect. The amount of downforce scales with size, and the placement bevaves as one would expect: Further left and aft mounted wing will generate downforce accordingly.

One of the debug options in BeamNG.drive is, after activating debug utilities in the general options, available under debug as aerodynamics (citation needed). This shows the COG, center of gravity, and COP, center of pressure (citation needed), as invisible points marked with red and blue text respectively, as well as red and blue lines of variable length indicative of drag (citation needed) and downforce / lift respectively. The blue lines, that have been shown to correlate with aerodynamic downforce and lift, are the main source of information for the following analysis. Note that ground textures obstruct viewing of the lower lines, which is why the cars are driven onto a part of the map without such obstructions. 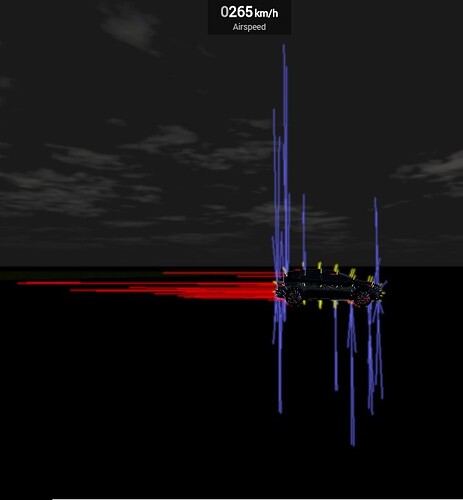 Placement and size of fixture

Add a wing fixture to anything that goes over 200 km/h and isn’t either ridiculously heavy or long;

Subscribe to RB interactive Aero (citation needed) and use the most discrete wing fixture to tailor the downforce to where you like it, for example when terminally oversteering at high speeds or to emulate lips;

Never Change the downforce slider in Automation, in fact, disregard everything that Automation tells you about downforce (exept the lift values of the body, but even they are only aproximate).

These experiments have been conducted on the BeamNG.drive, Automation:The car company tycoon game and Automation “To BeamNG.drive” exporter as of the 3rd of September, 2020

Thanks for posting. This will help with the 3rd prototype of my SSC clone.

Great write up, however i would critisise one bit, where you mention that you shouldn’t touch wing angle because it makes little difference from 50 - 100.

14 Downforce slider to 100 with wing: Fixture generates similar downforc to a slider setting of 50

In your images the 100 one is pretty much double the 50 one, giving more downforce. You are correct about undertrays doing nothing, they just add weight. Other than that, really nice write up, will be useful for new players less experianced with beam tuning.

Thanks for the effort. I vaguely remember saying I was going to write something then never got around to it. So maybe I can amend that by helping complete this one.

(I’m not at a PC that has Automation or Beam installed so I can’t do any of this right now!)

@Sky-High you’re absolutely right, I must’ve overlooked the effect of 100, maybe because 0 had such a baffling result .-.
@strop looks like you know more than I do ;-;
I’ll absolutely add a part on these technical elements, thanks for the suggestion! But I’m afraid, it’ll take a short while, as half of what you’ve written is en-tirely out of my depth. I really tried to avoid talking about the .jbeam files, as it’s really hard to make sense of them. I’ll need all the help I can get!

Yeah sorry about that. I’d been meaning to write something myself because this is something I was looking into for a while, but then work and life and taking a long break from Automation happened and I literally forgot. But since you’d already taken the effort to write something I didn’t want to completely hijack it.

I do happen to have a bit of time this week though. Would you like me to post how I approach it? Problem is that it requires explaining all the other concepts so it can blow out really fast…