Just recently got back into the game after a hiatus. Designed a few engines for my new company. Focused mainly on high end performance luxury. Any comments or suggestions are very welcome!

The first is a V8TT designed for the high trim level large sedans(Audi A8 BMW 7 Series). 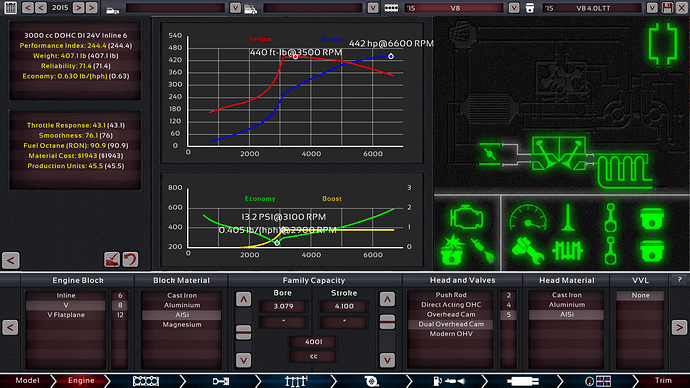 The second in an inline 6 designed for the mid level large sedans, and the higher level small sedans(Audi A4, BMW 3 Series) 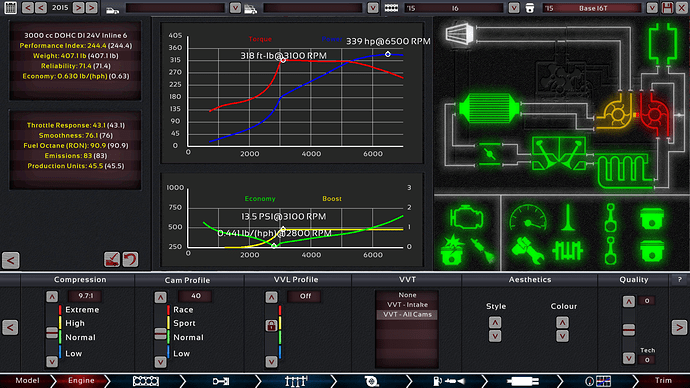 Its just a bug of some sorts, not sure why it didnt update, i asure you its a v8 in the first picture

The torque curves are not bad at all for the turbos we’re dealing with, but of course I would assume that you would like them to spool up a bit sooner than that for a road-car use.

I can’t help but feel that a reliability of 71.4 in a 2015 V8 engine for the parts you’ve likely selected is a bit on the low side despite everything else being quite good. What’s holding it back, the boost? The redline? Judging by the PU and materials cost, you haven’t touched the tech sliders either, and if you want it in a high trim level brand car like Audi or BMW, you could probably afford to put some money into the valvetrain and/or the headers. That won’t blow out the costs too much and probably get you closer to a 76-77 reliability unless you’re running highly undersquare.

I would be curious to see the actual stats on the V8. Those stats listed (other than what is on the graph) are for the I6 below it.

Let me see if I can get another screenshot of the V8 later tonight, I have no idea why it bugged out. Also the V8 is using a very undersquare design to save weight, I went as undersquare as possible while keeping reliability above 70. If I did play with the sliders, going to the bottom end would benefit the most as it adds strength to the pistons which fail the earliest in very undersquare designs. Always some tweaking to do

And yes I would love the turbos to spool earlier, but the FI update wont be for a long while, so gotta make do with what we got

Also quick question, which is more beneficial, lowering the boost and reducing A/F ratio to get some more economy, or increasing the octane to 95 and then trimming the A/F ratio while adding a bit of boost to keep power roughly the same but have better economy? I cant decide if having customers pay more for gas at the pump is worth the 2-3 mpg increase. The I6 is a tad thirsty and I revised it last night, ended up getting the MPG to 22-23 in my big sedan, the previous MPG was 20, only downside is it needs to run on 95 now.

I did some extensive testing while building a complete engine family during the last 2 days and my results indicate that fuel octane has a tremendous effect.
This holds true whether you’re trying to optimize power, economy or boost curve. So if I were you I would see what I get with higher quality fuel.