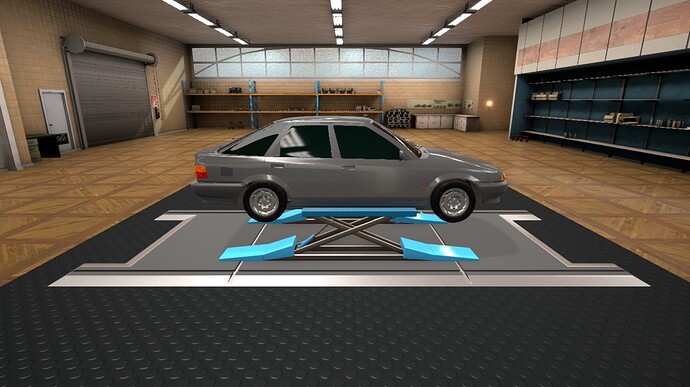 20200227234527_11366×768 208 KB
The year is now 1990, the Decarlis (see above) has been in production for almost two years. Issue is, shoddy quality standards at the factory are leading to a large number of build quality issues with the car, starting with wheels falling off the cars under power, “clutchsplosions”, to outright engine failures due to badly installed turbochargers to the carburetors. This is warranting the use of tow trucks nearly everywhere to simply remove them from the streets. (Not shitting on the car btw, it’s a well done piece of engineering.)

The government in their infinite wisdom has decided that, instead of actually attempting to fix the issue with the factory, they are instead demanding that a new factory be made, which produces public utility tow trucks (or SUV’s, or Wagons, even Vans, the rear will be chopped for a crane). Trucks, according to the government are classified differently than cars. Fortunately, every “car” on the road these days is a Decarlis, so hooking one up to a tow truck shouldn’t be too difficult, and being front wheel drive, they should have no issue with being towed, just pop them into neutral and there it goes.

The special government restrictions on trucks however, are that they all must still use carbs, or now mechanical injection as a result of the ECU ban still in place. These trucks aren’t planned to be used frequently, but they should still be reasonably fuel efficient. There is an arbitrary displacement maximum of 200cc per cylinder (so 1.2L V6 is as big as you can go). Turbos are optional on trucks (this year at least). The truck will be required to have a towing capacity of 2000 kg, 400 kg for the crane, at least 850 kg for the car itself and a good safety range to spare for any older steel bodied cars still out there (towing is a bit fucked, so I’ll add the load capacity to the towing capacity) with extra value placed on a higher towing cap. The engine should ideally reach 75 HP as well, with good low end power. These builds must be BoF (Ladder, or Light Truck Mono), and may use any variant of Steel, Partial Allu, or Fiberglass (fiberglass is discouraged with high manufacture cost) paneling. The trucks will also see some major offroad duty, so corrosion resistance is a plus, as well as decent safety standards, on par with Hetvesian legal standards. Pollution standards are starting to be enforced, so add a Cat.

Engine must be able to attain 75 HP (I will accept Automation “round up” values on the chart instead of specifically 75 hp or more in the details view. Can’t be bothered to check them all.)

Peak torque must be achieved at, or below 3500 RPM

No more than 200cc per cylinder

Model name must be AEC 2 (your username)

Trim, and Variant year must be '90 or earlier.

Emissions should be less than 1.5k Automation Emission Units.

25% Reliability (heavy duty internals which are not stressed will receive a 5% boost per component, this should reflect against the complaints against “what pickup/tow truck has such a small engine”).

Individual quality sliders above +3 or below -3

Total quality use must be net 0 for the engine and car (+1 top end, -1 exhaust for example).

Individual pistons must be less than or equal to 200cc

If Mech Injection is used, TC, ESC, and Speed Limiter use is banned, as these are ECU controlled.

I expect to be on vacation soon(ish) starting on the 19th of March, so I want to get this challenge off the ground, and hopefully wrapped up before that day comes up, else I won’t be able to actually conclude this one until after then.

Friendly reminder, this is an engineering only challenge. Feel free to design your car if you want. I won’t judge that.

Submissions are due by March 7th at 9 PM PST.
Here’s a timer to help you keep track.

The winner of the previous challenge should host this one.

Next time. I expect to hand off the torch, but I also want to build a base for what the challenge should be.

Man, I’d trust Mater high on meth to tow before these dudes… lol

tfw you’re supposed to do offroad duty in the mountains with 3.2 liters MAX at your disposal (and that’s with a V16, mind you, I can thinki of multiple V6’s with higher displacement.) Not to knock your challenge, it sounds fun to try and make this viable :b

I’ll add some noise limits, and emission limits, but eco is scored, so up to you.

I scraped the no Inline engines bit. 200cc per cylinder should make this challenge interesting enough. Should make all builds a bit more viable this way.

So you can have any amount of cylinders as long as they are under 200cc?

In what world would a tow truck have a 1.6L V8? Vans of the time had about 130hp i.e the ford transit. They tended to use 2.0L I4s, so the limit, in my opinion should be raised, so it is more realistic.

In a fictional world where laws are randomly decided every year, this is what we have.

The point of the challenge is to have some form of unrealistic restriction placed on what you can do with the car.

If I do up displacement, I’m gonna have to up the actual load needing to be hauled to compensate too.

Possibly not. That’s the challenge though. How many cylinders, and what tune do you need to make this work with the set restrictions?

It has been bought to my attention that the towing/load capacity can be cheesed, pretty hard.

Fix incoming. I’m dropping it from the scorecard, and putting more focus on reliability and drivability instead for now. You still need to get the car to tow 2k kg though, cheesed or not.

no Firetruck or Semi-Truck, or anything like that please.

On that note, I’m gonna open this one up.

Submissions are due by March 7th at 9 PM PST.
Timer added.

Redesigned for the new regulations, the Dudecia Analogtruck (warning: do not throw stones at the windows, as you may or may not have seen they will break): 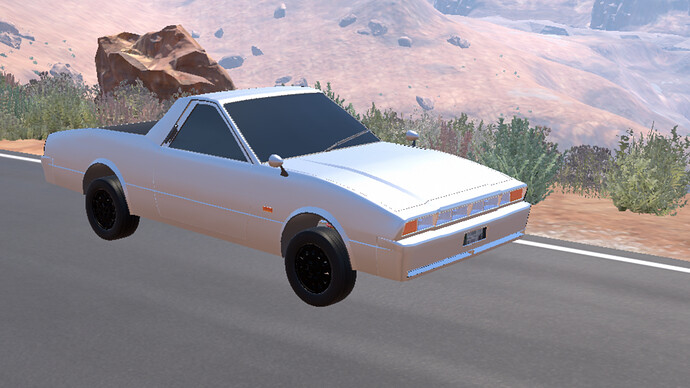 Not this time. You’re still stuck with carbs (mostly) so you’re either paying for injection and boost, or limited boost through a carb.