This one time, at band camp…

The year is 1997, December 1997, and the new Chancellor of Neoterica is about to unveil his crowning achievement, his gift to a weary nation turning their back on the past and looking to the future… His gift is the subject of this competition; Neoterica has founded it’s own car industry!

1995 - The Reactionary Motors trojan works far better than expected, although not with the Generals themselves. Their wives, desiring peace and the safety of their children, force their husbands to make peace with the rebels; this will become known as “The Cottontail Revolution” in the history books.

1996 - The nation of Neoterica is formed, elections are held and surprisingly are fair, which results in a slim progressive majority. Reforms are undertaken to reform the millitary, public service and social services. This results in an increase in equality, political stability as well as economic growth.

The aircraft industry is repurposed to building fast rail projects and safer STOL aircraft, in order to better connect the populace. New roads are being built, wilderness is being earmarked for conservation and quality standards are being introduced.

1997 - Neoterica celebrates it’s first full year of peace, prosperity and personal freedoms. Past hurts are healed by repatriating and compensating victims, on both sides, while the perpetrators are held to account by either exile or permanent house arrest. Leaders eye new avenues of nation building as new state owned factories are built in preparation for a big reveal in December…

Your part in this exciting chapter of Neoterica’s history is to develop the new line-up of the new national car company. You’ll be providing a total of three models, all of which shall be powered by the same engine family. External design is optional and you can suggest a company name if you wish.

Small Sedan/Hatch: This will replace the Decarlis EC30, Decarlis being absorbed into this new entity, this car needs to be practical, comfortable and easy to drive…

Offroad Cargo-van: This will be replacing the FM Trailway, Darvin Windjammer and the Reactionary Motors Service.

Sports Car: This type of vehicle has no precedent in Neoterica’s history. A good sports car is seen as a sign of civility and non-aggression by the politicians, as well as aiding a possible export program. Outright speed here is less important than handling prowess and coolness factor!

Rationale: Computers are still despised, tyre suppliers have limited capacity and tyre imports are not being considered!

Rationale: Primarily for the millitary, but civillian sales will definitely happen, although mainly to small businesses.

Rationale: Sharing is caring, or in this case, sharing is saving!

An overall numerical value will be derived from a variety of sources. The highest score will be the winner, however, any vehicle which displays odd characteristics (such as poor fuel consumption) will be sent back for revision (if there's time). If it isn't rectified then the entire entry list will be disqualified.

I will “show my workings” when I do the final rankings but this is the basic setup I’ll be using.

2 - The PU’s and EU’s will be measured against the target figure, for both engine and trim, with the amount over the target being removed from the initial score at a 1:1 ratio. The amount below the target score will add to your score at a 0.5:1 ratio.

3 - This process is repeated for each of the designs, with the grand total of the three models being the method to determine the winner.

In the event of a tied result, I’ll use real world metrics such as fuel efficiency, reliability and the relevant purpose related metrics of each entry to determine a winner.

I will allow a couple of days for serious objections or suggestions. Then, on Thursday the 30th of July (AEST), I will officially open the books for entries.

The competition will close on Monday the 10th of August. I will officially post a closure message Tuesday the 11th, probably in the morning, so you have until then to enter!

Best of luck with your designs and don’t forget to have fun!

Must that particular component be of the three-way variety? Especially since such a part reduces emissions more than a two-way converter can.

Must that particular component be of the three-way variety?

I’d normally reply with a polite variant of “Uh derr, course itsa tree way…” however, since this is the ARBITRARY engineering competition, I’m willing to let you make your own call on that!

You see, they don’t have any way of measuring exhaust gasses. No computers = no sensors so they import catalytic converters (too expensive to produce in-country) and install them. Therefore, as an engineer, you could make a case for buying 2 way cats instead of 3 way ones, but you’d have to make sure the economics were stacked in your favour, to justify the extra damage to the country’s air quality.

I’m getting a feeling the fighting was between 3 armies, fighting on the Y-front.

What does this mean? You haven’t listed any suspension or interior choices for family car, save for the number of seats.

What does this mean? You haven’t listed any suspension or interior choices for family car, save for the number of seats.

Yeah, I know, you’re free on your choices for the family car… But whatever you choose, the sports car must have the same choices!

Good luck and Godspeed with your designs, remember to pack your towel and never forget; 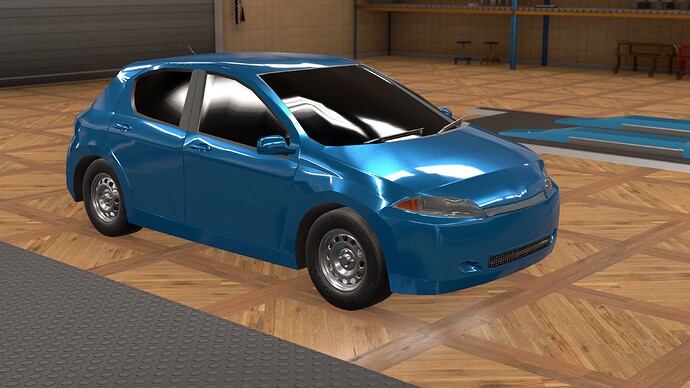 Named after the sound the fan belts make after 30,000 miles. 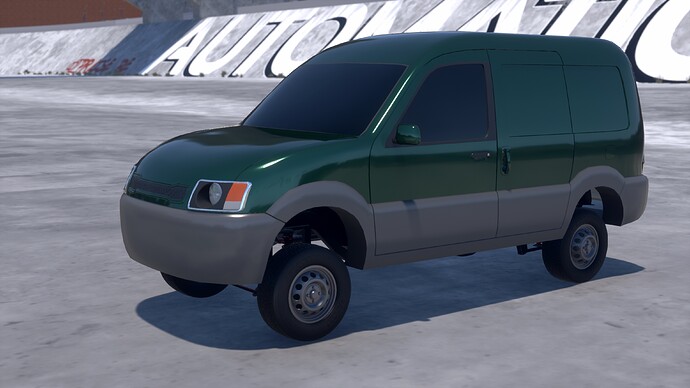 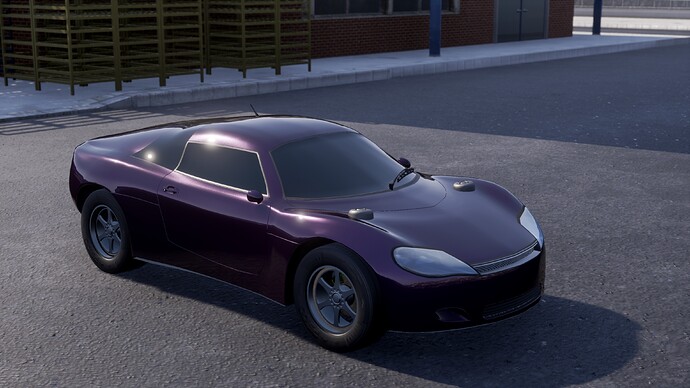 For those who want to be secret agents. Are those machine gun mounts on the front? Maybe… (or maybe there’s just a bug in the body when you use McPhersons, and, since I had to use the same suspension as the family car… well… you get machine gun mounts as a result!)

I still don’t entirely get that sports car suspension thing. Which choices exactly have to be replicated if the family car is FF, and I want to make the sports car MR? Rules say “rear end only”, but that makes exactly zero sense IMO - while the front options common for FF and MR are plenty, there is just one for the rear, and that is the double wishbone - not really a viable choice for a cheap family car with a significant engineering time limitation. Shouldn’t it be the other way around, especially since the front can be just copied, with the only difference being lack of power on axles, the rear has to be totally reconstructed.

Same supension choices as Family car (both ends if FF or FR, rear end only if MR or RR)

I still don’t entirely get that sports car suspension thing. Which choices exactly have to be replicated if the family car is FF, and I want to make the sports car MR? Rules say “rear end only”, but that makes exactly zero sense IMO

OK, I’ll explain this step-by-step so that you can work out how to do this…

First, you develop a family car. Let’s say struts and torsion beam, for example. Now you have to make the sports car…

The sports car will need to have struts and a torsion beam if it’s FF or FR. Torsion beam won’t allow for RWD so you either change to an FF design, or redesign the family car with either a solid coil or trailing arm setup.

This rule is intended to simulate engineering savings via parts commonality.

@VicVictory if you had issues with the clarity of this rule and you’d like to re-submit your sportscar, I’m happy to accept a revision…

Right, now it makes a lot of sense, thanks. I’ve suspected that but it’s good to be sure.

I understood that’s what you meant after the original clarification (which is why my sports car has stupid struts… er… machine gun mounts), but you made me second guess myself, dangit!

I understood that’s what you meant after the original clarification (which is why my sports car has stupid struts… er… machine gun mounts), but you made me second guess myself, dangit!

Hahaha, sorry about that, but I would have PM’d you ages ago if you’d actually violated the rule. Anyone who submits an entry that isn’t compliant will be immediately PM’d with what is in error. The only insta-bins in this competition will be those who don’t fix up their mistake in time, lol!

tried making some entries before and couldn’t really get anything to score well, I’ll try again and enter regardless probably due to it being a fixture optional challenge(meaning my shitboxes will be ready to go as soon as I give up tuning them).

If you don’t do this then your cars will score around 20 points lower than they actually are!

Is electric power steering allowed or is that considered to be computer technology? I assume basic drums means SLS right?

Pretty sure you can do two shoe for drums if you wanted. Standard drums usually means just use drums, it doesn’t really matter the config.

Yep, use SLS only, this way we can increase parts commonality and reduce supply chain complexity!

Yes to this also, the electric drive is a simple motor connected to the steering rack, no computers needed… Neoterica hates computers because they stifle human intellect and act as a crutch for weak minds; the leadership isn’t concerned with electricity and use of electric motors.

The MAHG Motor Company proposes its services of engineering to answer your problems of mobility.

I also have three cars submitted for this. It was quite the challenge, but it was quite fun to try. I’ll edit in images when/if I have time and/or don’t forget.