OK, so here I am, trying to make 1945 year dirt cheap car (in Sandbox) for city, family and stuff. Well, not initially dirt cheap, but was forced to go down on budget since for some reason people around the Globe could not afford My Precious. And after putting cheapest materials, craftsmanship, crappy 0.9L engine and so on (lowest quality possible, even engine parts) still only 30% of Budget-City-and-Family buyers can afford it. 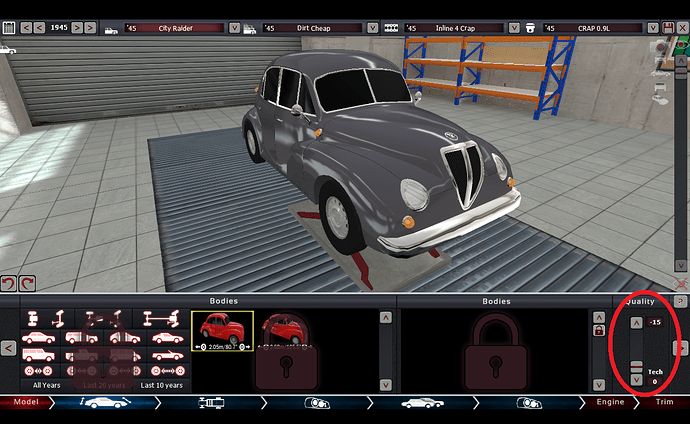 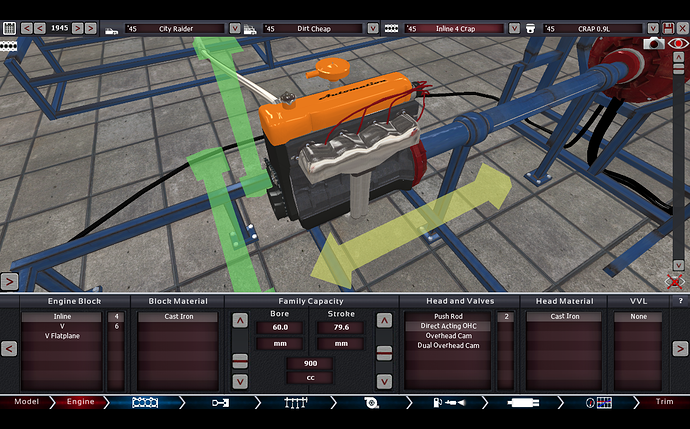 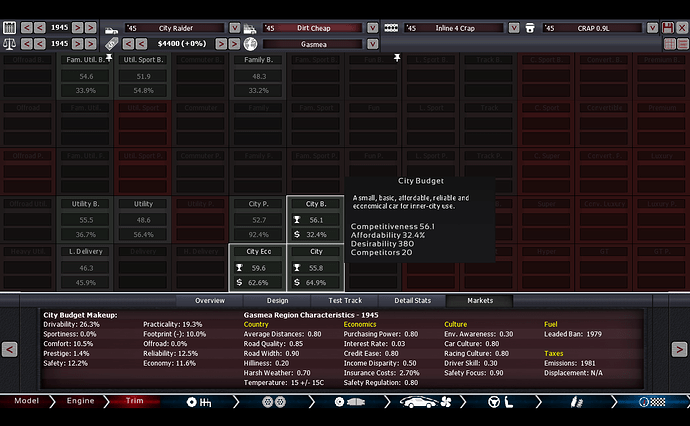 I don’t think it has something to do with desirability, since it was even less affordable when it was all green and sexy on the graph. What a hell? Looks like Affordability thing is not balanced outside The Galileo scenario for such early years. Or it’s me doing something wrong here?

There’s nothing wrong there, this is more a misunderstanding which comes from the fact that the buyer demographics are incomplete: there is no second hand market yet.
Ask yourself: how many people on a tight budget can actually afford to buy a factory-new car? If your answer is “probably very few” you would be correct, and seeing the numbers you are getting that would fit right in, you got pretty high affordability for these categories!

Here a quick example of a decent budget city car:

OK, that makes sense. Used cars were not considered because I was thinking like “we are a car make, so the graph would be about people on a market for a NEW set of wheels; why would we even care about used cars, we don’t sell refubrished here, how we can even benefit from used cars anyway? Go, Progress!”.

Could you clarify another question as well? On a spreadsheet image with demographics, statistics and stuff:

[quote=“Killrob”]
2) either Gaussian or half Gaussian. The half-Gaussian is a Gaussian on the high budget half and flat on the low budget half with the peak value.[/quote]

Nooow is crystal clear!!!, erm no…

, jokes aside, I’ll dig into it [size=85](maybe with an economic master or something under the sleeve,[/size] [size=50]shit another bad joke[/size][size=85])[/size]
Anyway thanks for the explanation Killrob, as usual.

[quote=“Killrob”]
2) either Gaussian or half Gaussian. The half-Gaussian is a Gaussian on the high budget half and flat on the low budget half with the peak value.[/quote]

Nooow is crystal clear!!!, erm no…

I think I know what Killrob was talking about. I’ll give an example:

So “G” means that price for your car should be around base budget in both directions, while “H” means that much lower priced vehicle (down to zero) still will be OK as well. If I am right in my assumptions anyway.

Here are a couple of examples of Gaussian functions so you know what they look like.

μ is the average. 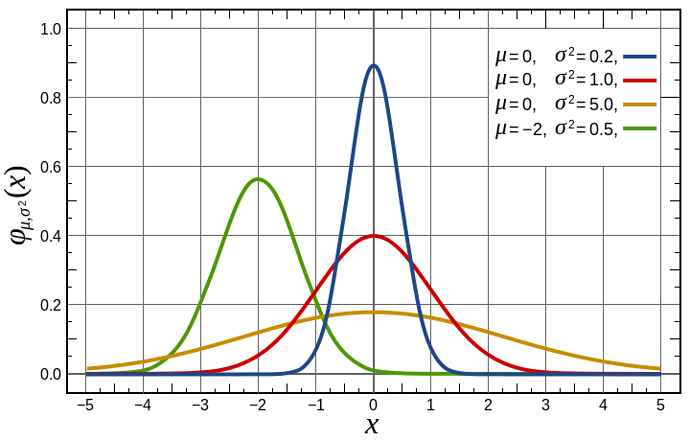 Edit: Just noticed that I messed up slightly.

Sigma squared is the variance. The square root of that is the std-deviation.

Thanks guys for the examples.
It was early in the morning and, honestly, I have forgotten all about Gauss etc and, suddenly after read Killrob’s post… the half-gaussian thingy killed me, and then high, half, flat, low…, well, for a spanish guy that sometimes get “lost in translation” (it was a film?) was like

It’s good to refresh/remember/learn more about anything so thanks once again.

[size=85]Mental note; do not read Killrob’s posts till you take the breakfast.

Not quite right: the Gauss distribution gives the budgets and NO 40000 +/- 10000 does not mean there are no buyers that have a 55000 or even a 90000 budget, it just means that there are few or extremely few of them.
Also: no, people that have a 100000 budget will still consider a 5000 car, they will evaluate each and every car that is both available and affordable to them. So yes, very very few people in the hypercar buyer category will buy your family sport sedan, and very very few pony budget category people will buy a premium muscle car.