Following a long struggle with meager sales and its creditor, Deutsche Bank, Bayerishe Motoren Werke AG was taken over by its not-to-be rival, Daimler-Benz AG, in March '59. The proud independent car manufacturer has been repurposed into a coachbuilder by its Swabian overlords. All the personnel incapable of hammering glorified taxi-cabs into shape has been laid off. The assembly lines of M78 and OHV V8 engines were sold for scrap, but the final humiliation was revealed in July… Damiler would sell the last remaining 501s with OM636 diesel engines.

This was too much for Alexander von Falkenhausen & Ludwig Apfelbeck. Visiting potential investors by day, designing a new car and engine by night, these gentleman sacrificed their health in their noble endeavour - the destruction of Daimler-Benz AG. “Somehow”, these gentleman managed to convince the Quandt family to return to the automotive sector, after Herbert had sold his shares of BMW to DB.

But this time, they wouldn’t provide the new company with machines to produce engines or cars. They wouldn’t even pay for a single brick used to construct the factory. Nay, they would use their experience and influence to assure smooth export/import operations between Austria and Yugoslavia! Yes, gentleman, Yugoslavia. A socialist European nation, yet not part of the Warsaw Pact. “Unaligned”, as they say. Unaligned enough to allow a western nation to invest, unaligned enough to export into both communist nations, but also “unaligned” enough (read: cash starved) to jump at the very notion of German technical expertise being brought to it, supplying the nation with engines for trucks, buses and other purposes… After Mr. Apfelbeck hinted at exporting luxury cars to the West for a 35% profit margin (Sweet, sweet cheap labour!), from which a nice share may flow into Yugoslavian pockets, the Yugoslavian government scrambled to arrange a quick deal with these former BMW engineers. They (the engineers) would bring their expertise and insight to the Zastava car factory and build economical heavy-duty engines for the TAM truck factory. In turn, Yugoslavia would merge TMZ (Zagreb motor factory) & Autokaroserija Zagreb and place the newly-founded Tvornica Automobila Zagreb under direct control of these German engineers.

*I didn’t have quite enough place to write a nice title. Semi-I means “Semi-Interactive”, meaning that your comments and suggestions are very welcome, and that I might ask for help/suggestions every now and then.
**Agram being the German word for Zagreb, it seems rather intuitive that this easier-to-pronounce word would be used… It also helps that the name doesn’t scream “COMMIES!” to your average western car-buyer.

Can’t wait for some actual cars

Can’t wait for some actual cars.

Ask and you shall receive!

As AMW didn’t have the money to order Bertone or Pininfarina to design their cars, they turned to a (back in the date) rather obscure designer. Pietro Frua. Or atleast his apprentice, as Pietro didn’t like the idea of sketching a car for 400DM.
The 1st drawings were spectacular, but proved to be too much for the manufacturing capabilities of the Zagreb plant.

In the engine department, however, things were about to wrap up. Our heroes were forced to use the same engine block for the Yugoslavian soc-realism & truck market and the Western export market. Compromises had to be made. The engine would be massively undersquared in it’s Yugoslavian version, with a volume of 1.6 litres and a stroke of 105mm, but it would get modern, foreign 4-barrel carburettors and a DOHC 16V cast iron head. The massively undersquared M10B16A60SE, turned out to be a rather promising base for future engine designs. Bored out to the maximum, that is. And indeed, at 2 litres displacement, now called the M10B20A60E, it was churning out a respectable 113PS at 4400rpm, with decent fuel economy!

However, a simple, sane I4 wouldn’t do. Our heroes managed to convince the Yugoslavian government to abandon diesel engines for trucks, buses and crop-dusters, and use their modular M10 architecture for larger engines, I6s [called M20] and V12s [M30]!* Although these were quite a bit more expensive than contemporary diesel engines, in comparison to these they were only sipping fuel, were perfectly balanced, remarkably silent and dead reliable. Just the right ingredients to dominate the luxury market!

Praised for its sturdy ladder frame and comfortable, yet sporty, Double Wishbone suspension, it made a great impression on both the American and European market with its unique combination of German, Italian and American styling cues.
However, it’s most striking feature was modularity, and AMW was quick to realize this, as can be clearly seen by their '60 ads. 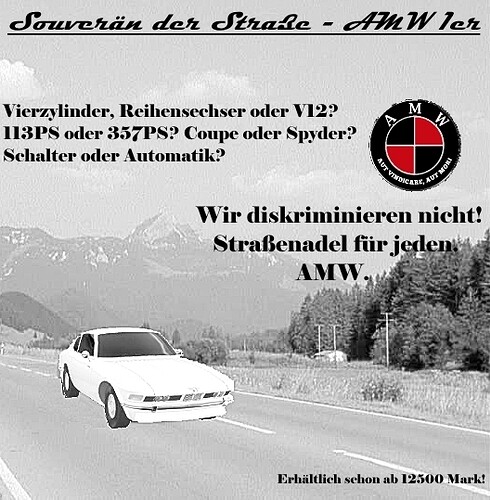 a03stsA.jpg529×539 189 KB
Do notice the genteel wraparound indicators, the leaping stance and tradition-conscious grille.
Several trims were offered - the “standard” Coupe was complented with a sporty Spyder body-style, made easy to fabricate due to the ladder chassis chosen for the car. These body-styles were offered with 3 different engines, the AMW M10 2.1 litre I4, M20 3.1 litre I6 and M30 6.2 litre V12. 3 different transmissions were available; the Chevrolet Powerglide 2-speed auto, the 3-speed auto Borg Warner Detroit Gear and the 4-speed manual Borg Warner T-10.

Here’s a little collage to give you an overview on the looks of the car:
i.imgur.com/dMZkkhM

*All that crazy talk about petrol engines being adapted for tank usage by Yugoslavia is purely propaganda, completely unfounded. And no, there’s not an analogy between this and BMW radials being used in “mail planes”. DON’T MENSHION ZHE WAR AGAIN!

If you’re looking for design collabs or build collabs - look around the car design sharing forum and see if anybodys’ works you like is willing to work together. It usually adds challenge to the build.

as above, I can do a collab sometime if you would want.

AMW’s the short version of Agramer Motoren Werke. So no, we’re not related… Unless… we manage to destroy Daimler-Benz in time to retire from automotive business, after renaming ourselves Austrian Motoring Wonderland and giving it as a present (chock full of loans) to Austria.

Is your company related to the already existing AMW

brand?
AMW’s the short version of Agramer Motoren Werke. So no, we’re not related… Unless… we manage to destroy Daimler-Benz in time to retire from automotive business, after renaming ourselves Austrian Motoring Wonderland and giving it as a present (chock full of loans) to Austria.

Is your company related to the already existing AMW

brand?
AMW’s the short version of Agramer Motoren Werke. So no, we’re not related… Unless… we manage to destroy Daimler-Benz in time to retire from automotive business, after renaming ourselves Austrian Motoring Wonderland and giving it as a present (chock full of loans) to Austria.

Well, TheTom doesn’t mind me using the same abbreviation for the name of my company as his… So everything’s fine!