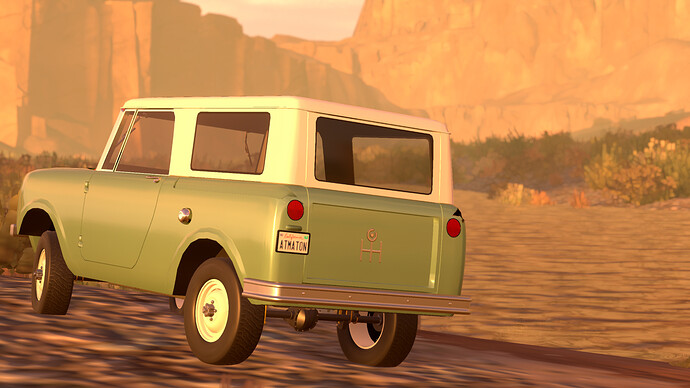 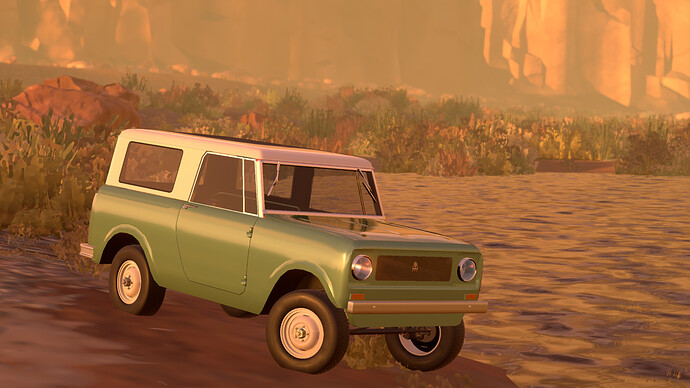 GENERAL ARM RULES
Automation RestoMod is a challenge made by @cake_ape . The aim of the challenge is to take a real-ish car, and modify it to make it more modern and unique. This is the third challenge of the series, and will have some scoring tweaks to incentivise unconventional builds. In addition, this challenge will have all 7 Scout bodystyles to choose from in creating a submission. This challenge will open for entries on February 19th, and will stay open until 11:59 PM PST on March 3rd. Please make any suggestions for rule tweaks before entries open.

How this works:
Download the .car file.
Import the car into Automation.
Clone both the car model and the engine family, and set the year on everything to 2020
(if you don’t know how, here is an incredibly useful video by @cake_ape on how to properly set up the car and set the date, no excuses this time!) 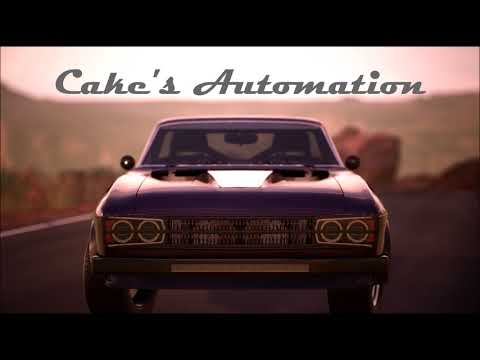 Changes to make, and changes to avoid:
Do NOT change any morphs except the wheel wells, but you are allowed body moldings.
Do NOT change the chassis type or material beyond galvanized steel, which is allowed and will only cause a minor authenticity ding because it coats existing panels. Also, because @Admiral_Obvious wanted me to clarify, you are in fact allowed to change the suspension, it is not considered part of the chassis.
Do NOT change the engine orientation.
Do NOT use more than 115 Engineering Time on the chassis.
Do NOT use more than 130 Engineering Time on the engine.
Do NOT submit a car costing more than 45 thousand dollars- Brent doesn’t have infinite funds!
Do NOT submit a car with an Environmental Resistance below 40.
DO change the engine so it uses 85 or 91 RON fuel (unleaded).
DO make sure your fuel efficiency is 14.7 L/100km or better (16MPG)
DO make sure to include at least 2 seats per row
DO make sure to forward the year on everything to 2020
Failing any of these requirements will lead to an instabin.

OTHER REQUIREMENTS
The proposal needs to adhere to modern emissions standards. A score of less than 150 on engine (not trim) emissions would be desirable, and the car should have a catalytic converter plus at least one baffled or reverse flow muffler. Brent also has preferences on how the build should turn out and will judge accordingly, based on the information he gave plus the requirements listed.

THE JUDGING
All entries will be judged upon several objective, in-game criteria as well as several subjective ones.

FINAL WORDS AND SUBMISSION
In case you missed this:

This video is seriously important considering half the field last round didn’t clone properly, so here it is again:

Note: To switch from the default hardtop to a different bodystyle, instead of having a separate car file linked for each you can just switch it in the “Trim Body Selection” menu

REMINDER: ENTRIES DUE BY THE 3RD OF MARCH.

Just realized I forgot to mention one mildly important detail if you want to keep the stock grille: In order for the grille to show up (everything else is vanilla), you need the (Almost [kinda of{maybe a bit}]) post 2020 grilles mod by Terrazi. There was no grille in the base game that was the right shape for a stock Scout, and this was the best I could find.

This particular model being restored is a 1965 Scout 80 4x2 with a 3-speed manual and a straight-4 made by taking International Harvester’s 304 V8 used in their farm equipment and trucks and cutting it in half. This particular model features 92hp, not a lot but the torque figures make up for it significantly.

Unlike the description mentioning an I4 engine, the included engine is an I6 with 3.7L capacity

I think I might have stuck an engine from an earlier test build of a different body in there by accident and not noticed it was the wrong engine- one sec and I will have that fixed! Thanks for letting me know!

Okay, that should be resolved. I cannot get the correct engine to 92hp no matter what I do with the proper 4cyl factory specs, so I guess over 50 years of operation the engine lost 3 or 4 ponies along the way. Shouldn’t matter too much as I suspect most will rip out the engine, but for anyone planning to keep the engine this file should be at least using the right specs!

I’m in, if I can clone and edit the year

A score of less than 150 on engine (not trim) emissions would be desirable, and the car should have a catalytic converter plus at least one baffled or reverse flow muffler.

On that note, the catalytic converter should be a three-way unit on account of its superior emissions reduction abilities.

I assume that falling behind the original in any important attributes like safety will be bin worthy here, like ARM2? Just wanna make absolutely sure.

On that note, the catalytic converter should be a three-way unit on account of its superior emissions reduction abilities.

It probably should, buy I’m not going to stop anyone who feels like getting away with a two-way from doing so assuming emissions are reasonable. The resulting stats will speak for themselves, no need to add an obscure extra rule to restrict it.

I assume that falling behind the original in any important attributes like safety will be bin worthy here, like ARM2? Just wanna make absolutely sure.

I have no plans to make such things autobin-worthy, especially after the very slim number of acceptable entries for ARM2, but such attributes falling behind the original will obviously affect the final score proportionately based on the competitor builds and their stats. Therefore, compared to the other cars any stat less capable than the original may very well be enough to keep an entry from winning or placing highly. For ARM3, I have been trying to simplify the rules, make them a little more understandable and eliminate some redundancies: natural selection will in many cases take care of things like that better than an autobin would.

I do also intend to have the judging table return for points from ARM1 to make results easier to understand as well as to help the entrants understand from my point of view how I judged. I found it quite useful in ARM1, and hopefully it will be useful for everyone here as well.

is it all 4 years that have to go to 2020 or just the trim year and engine model? i assume the latter as that makes sense for updating an older car

It is all 4 years that have to be changed to 2020, you need to be able to use all the tech that has been developed between 1965 and now in a restomod and without setting all 4 to 2020 you won’t have it all.

im allowed to use the pickup body right? or does it have to stay hardtop wagon?

Yes, you are allowed the pickup body. You are allowed any of the bodystyles the IH Scout body has to offer. The hardtop wagon is simply the first visible option, and therefore the one that I kept for the .car file.

what would be a good offroad score to aim for? my build had around 45 and was softer than jello in beam lmao

What is “good enough” will depend on the other submissions and the customer’s taste. Don’t go by how the car handles in Beam, rather focus on the stats and their relationships to each other in Automation (e.g. 80 offroad might beat everything else in offroad, but tank the submission because drivability or comfort are bottom of the barrel).

As the challenge is now officially open, I have made some last minute changes and adjustments to the rules and the car! There are some sections of the rules that have been adjusted, clarified, and the car file has been edited significantly because the one that was posted had quite a few issues I realized I had overlooked and the detail/quality of what was there left… something to be desired. The revised engine is now making the output it should have been all along, and several other issues I realized the file had have been fixed. The color scheme on the .car is also a factory shade now! If you are already far through your build, feel free to continue as is with the old car file, but I would definitely suggest swapping if you aren’t far along in the process. Sorry for the constant adjustment- in hindsight I should probably have waited an extra day before posting the competition and made sure everything was perfect- but from here on out things should hopefully be smooth sailing! Good luck to all competitors, and I can’t wait to see what awesome builds you all can come up with!

If I’ve basically binned all the fixtures of the old car off is there much point me downloading the new new one? I assume nothing has been morphed on it differently

If you have replaced the engine and binned all the fixtures? Nah, you’re fine, no point in redownloading and losing all your hard work. Yeah, all the morphs are identical, so that part shouldn’t be an issue!

Also, @karhgath requested a little clarity on how the comfort requirement works, I figure this will be helpful for everyone so here is my response copied and pasted:

What “comfort” means in this case is the raw stat in Automation. As far as it being a priority- I wouldn’t sacrifice offroad capability heavily for it, but the original car is very uncomfortable. It has leaf springs FR and an inexpensive interior, in particular, which murder comfort. The comfort stat will naturally improve a lot as the build is completed just simply because the new build will obviously have newer and better components in many of the areas that would affect the comfort stat, as well as the fact that cars built for offroad often have soft suspension. It doesn’t need to be a big plush boat of a car by any means, but it does need to be a significant improvement on what the original car has to offer because the client is now in his mid sixties and can’t handle the primitive nature of a Scout quite as well. Dude wants to be coddled, especially considering he is shelling out all this dough for a restomod, and higher comfort stats than competition will obviously give you an important edge over the rest of the competition, but it shouldn’t be to the point where it heavily sacrifices other areas of the build.