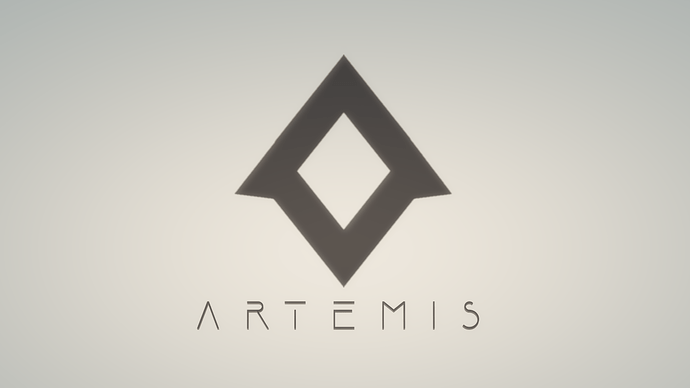 A collaboration between two Austrian engineering students, ARTEMIS Designs produce high-quality kit cars that aim single-mindedly to provide a driving experience bested by none – all hosted and run in a simple garage inside the city of Leoben, Austria.

Following in the footsteps of such names as Ginetta, Saker and Elfin, ARTEMIS attempts to distance itself from those before it, as it isn’t strictly a business as such; but more as an artistic vent. Whilst of course one can purchase a DIY and ready-built car as you would with other vendors (and mechanically it certainly is sound), the focus is more on bringing attention to the aesthetic side of the engineering industry, and how machinations can harness the abstract concept of beauty. This ideology is precisely what ARTEMIS strives for, and knowledge is bettered by experience - and we all know where experience comes from! 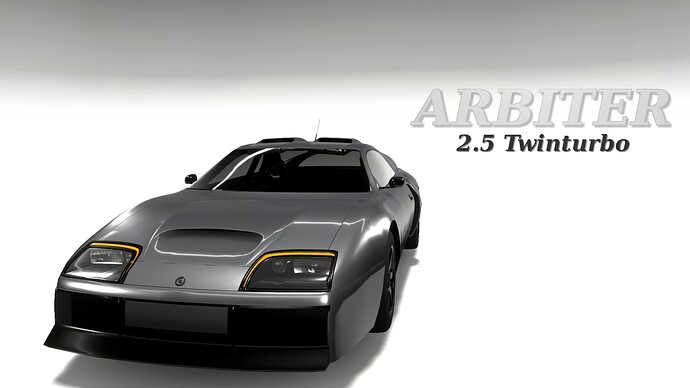 The only car in the company’s history to be designed and built solely by the founders, the ARBITER is a textbook definition of an underdog punching well above their weight.

Nobody knows you better than you. It’s something that almost goes without saying, but talking to yourself can elicit a wide variety of responses – both mental and emotional. Being on the same level of chemistry with someone else? Nowhere near as likely.

This is something that came as a revelation to two Austrian engineering students who met serendipitously at their place of education. They knew that the bond they had was virtually impenetrable – and they had the talent and know-how to go rogue; so in 1990, they did just that. Acquiring funding from interfamilial connections, they set to work designing a car to beat the world. 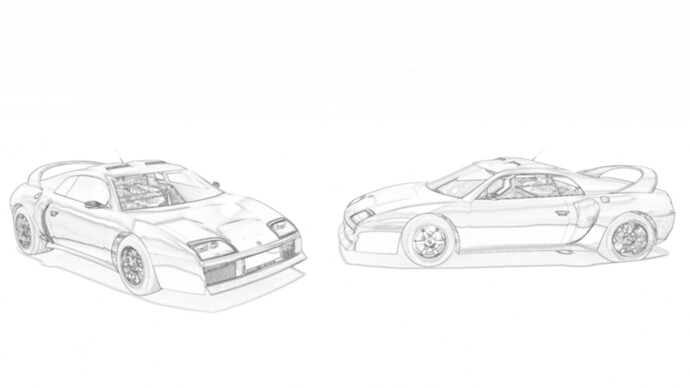 The main goal of this project was remarkedly simple.

The goal they attempted to reach required a vehicle with the best compromise of handling, speed, drivability, and comfort; all balanced to fit within the preordained per-unit cost target of 50,000. It needed to be light, it needed to be powerful, it needed to be comfortable; but perhaps most importantly it needed to be drivable by people that weren’t Ayrton Senna.

That was a joke, by the way. This sure as hell wasn’t simple. It was torture, as the following wall of text shall now explain.

It was determined that the car’s optimal powerplant would be a 6-cylinder engine, so after some debate they decided to settle on a PRV (Peugeot-Renault-Volvo) V6; something that Venturi would end up doing a few years later. However, attempts to source this engine were unsuccessful; owing to their lack of any credibility in the field they were attempting to enter. So, with the help of contacts the two men shared, they decided to take matters into their own hands… and make their own 6-cylinder engine. With blackjack and hookers. 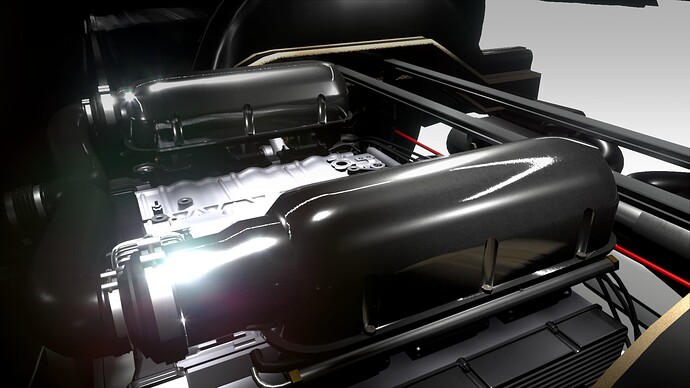 The result was the RE25-T2: a 2.5 litre; twin-turbo, 6-cylinder boxer engine. It truly is a tower of power – when petrol is applied, it produces an unbelievable 420 horsepower. Whilst it is an incredible achievement, there were quite a few issues… usually serious, admittedly, that arose during the design stage.

To explain why my forehead looks like it’s been sandblasted from hitting it against plasterboard walls for three days, we need to explain the purpose of turbochargers. There are two ways of using a turbocharger system; you can use it to smooth over weak spots in the engine’s normal power range, or use it to boost its high points for maximum power. There are benefits and drawbacks to each, but obviously ARTEMIS chose the latter option. That’s usually fine when you’re being sensible with the boost, but when you’ve had one too many beers and decide that you need 2 bar of boost to get to the magical 420bhp, there are going to be many components in the engine begging you to stop all at once. 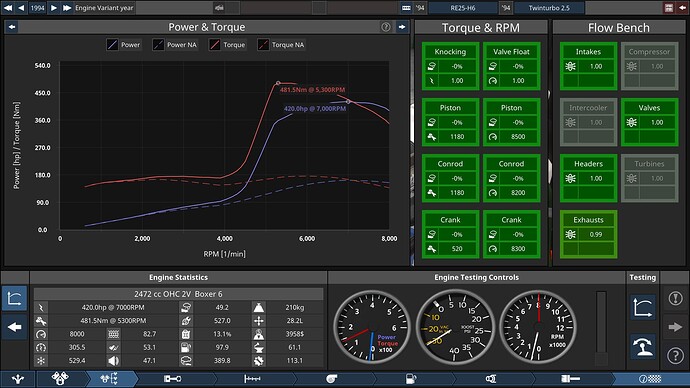 Turbos melting, turbos exploding, crankshaft failure, connecting rod failure, piston failure, knocking, valve-float, exhaust failure, engine overrev, engine overtorque, oil pump failure, disturbingly high temperature reading on basically every component of the engine, overtorque on the transmission, engine electronics failure and even a catastrophic fire that almost killed our two protagonists as well as possibly endangering a small county. These things and more were the obstacles they slammed into trying to get this engine to cooperate.

Evidently, this wasn’t the “bang” they wanted to start week one with.

Week Two: Getting It Together

Despite contributing to the ever-increasing sales of blood pressure medication, our team soldiered on to fix the seemingly insurmountable problems they faced. Brushing through the list they compiled together, thermals seemed to be a reasonable place to start… and you’ve already seen one of the fixes.

If you’re an observant individual, you would have noticed something very odd in one of the images. If you didn’t get it, let me spell it out for you. The engine intake has been lined in silver foil. This is interesting, as the McLaren F1 had its entire engine bay lined in foil; but instead opted for gold. Why is this?

Well, the McLaren F1 was designed to be the best car in the world, money no object. Gold foil was; and still is, one of the best heat conductors for this particular use-case. It has a reputation of being so, and also being fairly inert… and so Gordon Murray and his team of designers and engineers went for gold foil.

The Arbiter – by contrast; is on a strict budget. Our protagonists might have a fairly large amount of funding, but as their contributors made plain to them, it’s not a limitless pool. This is a bit concerning, but our heroes are an Austrian-German partnership. They’re clever and very crafty; and they followed their own stereotype and did something really boring intelligent; they did a cost-benefit analysis.

There is a reason gold medals are given out to winners and not silver, and that’s because gold is more lucrative (and a better performer in this use-case). However, we’re not here for maximum bang; we’re going for bang-for-the-buck, so after optimising price-to-performance… silver comes out on top!

It isn’t even close, either. If we were to source the same 16 grams of gold as in the McLaren F1’s engine bay, we’d immediately blow $1000. The same amount of silver would cost something like 15 bucks… and we wouldn’t even need to use all of it, since we’re only coating specific components and not the whole damn engine bay.

Obviously, cramming 2 bar of boost into a relatively low-displacement engine will compromise its reliability significantly due to thermal stress (and even more so with a race intake fitted). Also, a set of stiffer valve springs would be necessary to counteract the severe valve float after 7500 rpm. Still, 420 bhp from 2.5 litres is an amazing achievement for 1994.

Increasing the spring strength from its current setting decreases reliability instead of increasing it for some reason, and also triggers my OCD by getting rid of the nice rounded power figure. I’ll try my best to find a way around it, though.

EDIT: Fixed. Netted a 2l/100km improvement through turbo tweaking, but I had to sacrifice a few hundred revs to get it. DAOHC can truly be a hinderance, but I like its design a lot better than DOHC, and it’s more interesting.