I asked myself: Why don’t we have a racing series that passes continuously through the years, whose rules are always up to technical and political developements to be very realistic (prepare for hot muscles in the late 60s, turbos in the 80s, and so on)?
Here it is, the ATC should become a championship that is funny and interessing for everyone, with unique rules and even cooler cars to take part.

ENGINE WITH CAPACITY AS YOU LIKE
CYLINDER COUNT IS FREE
TRANSMISSION CHOICE FREE
MINIMUM WEIGHT: DEPENDING
No minimum weight for cars that have engines smaller than 3000ccm,
smaller than 4000ccm is 800 kg, smaller than 5000 ccm 900 and so on. If
you are crazy enogh for a 9000ccm engine, its 1300kg
MAXIMUM LOUNDNESS: 75
MINIMUM RELIABILITY: ENGINE 30 , CAR 50
ADVANCED SAFETY REQUIRED
NO BASIC INTERIOR

HOW THE RACES WORK

I am inspired by the Hot Lap Challenge, so I do it the most simple and easy way. I will let each car race one lap on every track. The fastest wins.

The six tracks have to be different. Both small, frisky and dull but strong-engined cars should have their chances. The racemaster has to keep that in mind.

How do you like that idea?
Do you have any suggestions what can maybe improved?
aaaaanddd…

DO YOU TAKE PART?

SUBMISSIONS FOR THE FIRST SEASON will be accepted until 31.08.2016

To respond your question… We have de BRC. Also, once you finished hosting a whole season, you really want a break from the series

(I’ll be participating by the way)

Oh yes, I tried to imagine how much work that will be. And it is a lot. But let’s see if the series continues more than once.
I thought about joining BRC, but that was too much and too complicated for a newbie. I was really striked by it all. So I doubted how a simple, lovely championship that everyone understands should be.

As I am bad at mathematics, there is no propability of engine fails calculated with complex functions and so on. Just an easy system everyone understands with a relatively small number of teams so that I can handle it without confusions. So I am confident that there will be some ATC seasons.

The rules are made to be as fair as possible, so they are not restrictive and allow for two different car configurations to earn the maximum in constructor’s championship as an additional attraction.
Another thing are the quality sliders, you have to think over a lot of things using them wisely, I think that adds the feeling of actually being a race engineer without exceeding complexity

Finally something where I can use my falcon

is it bad if i’m building a van?

You brought me on an idea!

RULE CHANGES - WILL BE UPTATED IN A MINUTE

EACH TEAM PROVIDES ONE CAR.
TWO CARS WILL BE ASSOCIATED TO FORM A TEAM.

The teams will be chosen BY CONCIDENCE. I guess there will be some interessing combinations.

btw: A VAN? HELL YES!
As long as it is no convertible, it is allowed! The idea is not too bad, as I submitted a muscle for Hot Lap Challenge and - as irony - built a muscle van for fun.
THE FUCKING VAN IS BETTER! 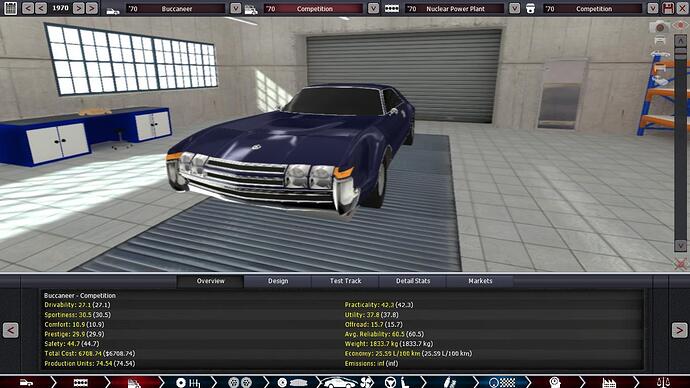 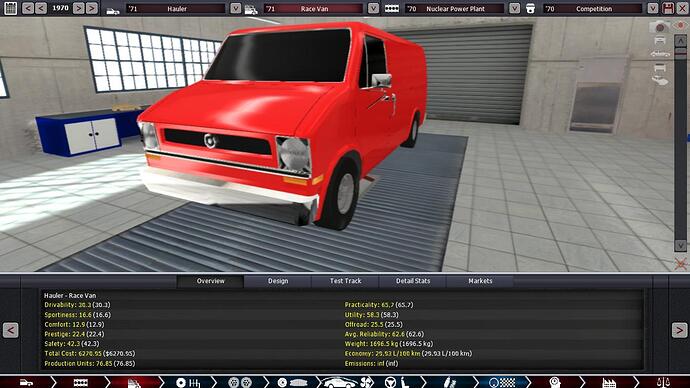 If we ever make it in the 70s with this championship… I guess there will be a reglement in the that wants to see only vans on the track!!!
Untill then, you can try your luck against conventional cars.

I’d have a car already made (from my company thread) if the minimum weight was actually… lowered some. Guess I’ll have to figure out how to fatten up the Prince.

Edit: Probably not the right place to ask, but does anyone have a roughly 4-liter V8 made between 1940 and 1955 as a crate engine? I’m playing it straight on this one if I use Storm Automotive, and in 1955, we just opened our doors. We don’t have a V8. We’ve got a 1-liter I4 that’s too light to make the cut.

What’s the weight of your car? Maybe I’ ll think twice about it.

I suggest you to look up the CMT thread (and maybe leave a comment how you think about the brand).
There is the 1945 Iron Pig. Not really crate, but maybe that what you are looking for. Over 200 hp pure brute force.

824.7 kg. Probably too light to adjust down to, so I’m willing to take a peek-see at that engine you’re offering. Though the Prince was hardly designed for that much power.

However, having gotten a look at it, and done the math, it’ll make the minimum weight on the engine swap alone… This could be fun.

Are we allowed Super Leaded, or are we only using Regular Leaded?

I really look foward to the cars that will be racing. There really seems to be much difference between them. As I hoped.

I will use a race variant of the Daytona Luxury Sport Coupe.
It has a 5600ccm V8 and is all-new in 1956, so a good result would make a perfect advertizing. I guess I’ll eliminate some quality sliders used, change the interior down to a standard one and use a manual.

I do not care what fuel do you use. I recommend Super as it really helps.

Yes, if they do not affect performance, they are allowed.

I’m sorry, but what exactly would I have to do to participate?

I need a 1956 car with an engine of the size between 4 and 6 liters.
Engine and car can be given five quality points as you like.
It can have every shape that is offered since max. 10 years in the past, but no convertible as these cars are not stiff enough for racing (in reality).

Please do not use race exhaust or intake as well as slicks. Reliability for the engine must not be below 35, for the car not below 50.

I am going to join. The idea of the challenge seems very good