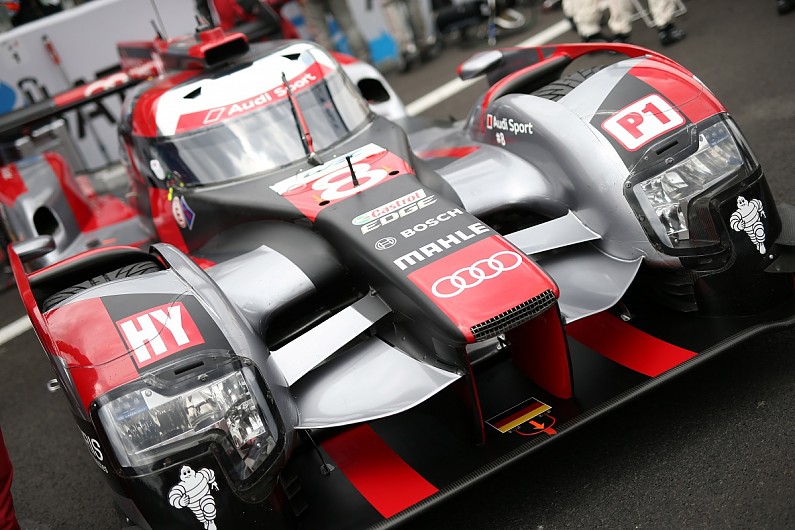 Audi quits WEC to focus on Formula E instead of LMP1

Audi will withdraw from topline sportscar racing at the end of 2016, signaling the end of its commitment to the World Endurance Championship and Le Mans 24 Hours

Really sad to hear that Audi will be ending some 18 years of Endurance racing later this year, leaving LMP1 to focus on Formula E. Don’t know about anyone else, but for me personally, having grown up watching them win Le Mans 13 times in total, this is a real end of an era.

What do we think this all means for LMP1 and the World Endurance Championship as a whole? Given that Porsche and Toyota are now the only factory teams in the category and the other, Rebellion Racing, is pulling out, who is going to fill that spot, if anyone at all?

Could this potentially be very good for LMP2, potentially leading to a resurgence for privateer teams?

Does this also mean that Formula E is going to get really good, as Jaguar recently announced their involvement (hint: I really want to see Jaguar v Audi).

who is going to fill that spot, if anyone at all?

Mazda is slowly making an attempt to reenter smaller scale motorsport events in the Americas IIRC. Would be killer if they came back to Le Mans and other series!

EDIT: I think Audi’s just gotta do what it has to. Not complaining if they’re considering bolstering support in rallycross and DTM, not at all!

Shame. I do hope someone like Ferrari fills the void. I think Ferrari should return to the top level.

Nah. Ferrari doesn’t have much expertise in endurance racing. Makes sense for Audi to pull out when you think about it, though. The tech in LM cars don’t really trickle down to road cars anyway, so DTM and rallycross will be better suited to future Audi. And Formula E most definitely will be will all the electrification nowadays.

@Fayeding_Spray Ferrari do already compete, but down in GTE instead with the 488.

@Deskyx And there’s the exact reason they won’t go back to prototype racing (sadly).

@ramthecowy You say that, but back in the 50s and 60s they were unstoppable. Until Porsche came along

But you’re right with the tech thing, that article mentioned that with Audi moving into electric cars, Forumla E made more sense.

So sad to hear the news but…I think that such move would be a major mistake on Audi’s part, as Formula E is as B-O-R-I-N-G as a golf or even a chess match. Therefore, I’ll be stickin’ to F1, NASCAR, FIA/IMSA GT and NHRA. (with some Monster Truck and WRC/Global RallyCross action in between.)

I agree with you - on paper, Formula E is guilt-free and exciting, yet in practice, without the extreme speeds or soul-stirring engine noise found in other forms of racing, I will never warm to it like I did with those. Take away the noise (or at least part of it) - which is usually part of the appeal - and you are left with a motorsports series without a soul.

@DeusExMackia it is understandable that Audi is withdrawing from the LMP1 category - there are no diesel-electric hybrids in its passenger car range. However, will the R8 LMS continue to race in the production-based GT3 categories across other series? And should they adapt that car to GTE Pro/GTE AM to fill the void left by the demise of their LMP1 program? Most worryingly of all, though, could the withdrawal of Audi and Rebellion cause the entire LMP1 category to be axed? Especially since most privateers wouldn’t be able to enter it for financial reasons.

I remember the World Sportscar Championship (the predecessor to the current World Endurance Championship) shooting itself in the foot (and ultimately self-destructing) by mandating the use of the same 3.5-liter engines as contemporary F1 cars in 1991 - the series folded at the end of the following season due to excessive costs. Although the WEC is here to stay, could we end up with a future in which LMP2 is the sole prototype category there?

^^^^^^^^[quote=“abg7, post:8, topic:18570”]
I remember the World Sportscar Championship (the predecessor to the current World Endurance Championship) shooting itself in the foot (and ultimately self-destructing) by mandating the use of the same 3.5-liter engines as contemporary F1 cars in 1991
[/quote]

The collapse of the WSC occurred just a few months after my birth, so I barely remember it. There would not be a unified category for prototypes for the next two decades afterward.

@abg7 I really hope it doesn’t end up being like the early 90s. They managed to end the Group C era in just over two seasons because of it. We really need a new third force for LMP1 (and a fourth one for that matter) if it is to survive, but I’m all for LMP2 becoming the top tier in WEC if LMP1 collapses.

This could really mark a new era for endurance racing. Considering also that BMW are joining GTE in 2018, that’s going to be really interesting: Ford vs Ferrari vs Aston Martin vs Porsche vs BMW is a good mix.

Now that I think about it, there really isn’t a point of there being an LMP1 class, as, like others have said, there is fuck all parallels to normal production cars compared to GTE or other motorsports (WRX, WRC, DTM, WTCC, etc.). I think leave the LMP class(es) to the privateer teams, and make the bigger teams field GTE cars based on their road models (although it seems they are heading away from proper GT (Aston Martin etc.) and more toward Sport/Super cars (458, New GT, etc.). Is a shame, tbh.

And it was all going so well! For a while it looked like a new golden era for endurance racing. Perhaps not quite.

They complain about high costs but Toyota’s Germany based LMP program runs two cars on 80 million a year.

Having just two manufacturers left in a series won’t necessarily lead to its downfall - between 1995 and 2012, what is now called the Supercars Championship only allowed cars based on the Holden Commodore and Ford Falcon (in 1993/4, they shared the grid with other makes). It brought back mass appeal to Australian race fans, who preferred to see the cars that sold the most in action on the track.

@Riso Teams are always going to complain about funding. It just depends on how a team runs itself. Brawn GP ran on a shoestring budget against Ferrari, RedBull and McClaren and absolutely owned it (loved watching them beat RedBull and Mclaren in 2009). Toyota are seriously efficient (one of the reason they really deserved to win Le Mans this year) when it comes to running a race team.

@abg7 That’s true, and it could end up being very good for LMP1. But, the Commodore and Falcon are much less expensive race cars compared to an R18 or TS050. The economic incentive to race really needs to be there annoylingly.

Yep the v8’s are expensive but not lmp expensive. Although 1 million per car is common and 10 million in a season can be spent per car per team. But they are dedicated racecars sharing nothing in common with the road cars except they are styled to look like the road cars with the exception of the amg that actually use a destroked version of thier production 6.3

It won’t be possible for them (or most manufacturers for that matter); the sheer cost of designing, building, and maintaining a race car for that category is well beyond their reach. The fiercest battles are arguably found in the production-based GTE Pro and GTE AM categories, where relevance to road cars (albeit some very expensive ones) is much greater. But the WEC would be a much poorer place without the LMP1 category, and could probably collapse (or at least shrink in importance) if it lost both prototype classes. That said, the obsolescence of the now overweight diesel powertrain in the R18 might have led to their withdrawal from the series.

That’s not a fair comparison. Honda invested into the 2009 Brawn car for two years before it hit the road.