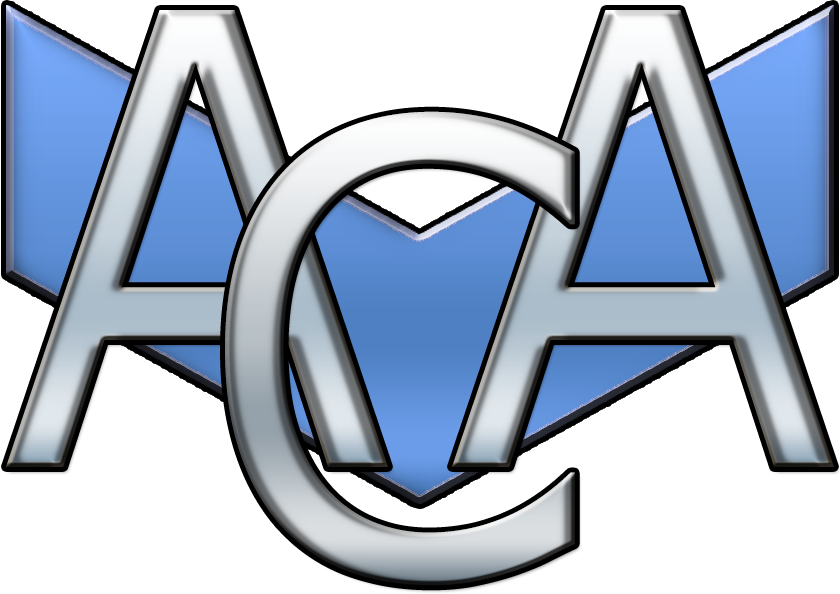 Founded in 1931, ACA was formed when Lansing Motor Company acquired Montpelier Luxury Motor Works and Barnhart Tractor Company, both of which had gone into liquidation following the Great Depression.

Based in Lansing, Michigan, ACA is one of the largest US auto companies with over 190,000 employees around the world. Within ACA are four divisions, Montpelier Luxury Division, ACA Light Truck Division, ACA STO Performance as well as Auto Corporation of Australia. 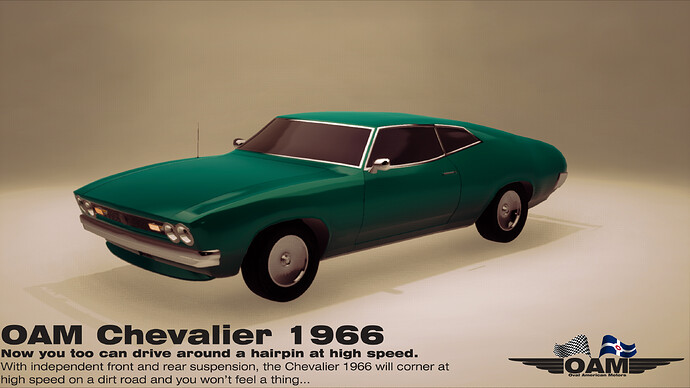 An original 1966 poster for the OAM Chevalier in Laguna Green

In 1966 OAM revealed their first mass produced car, the OAM Chevalier at the Detroit Motor Show. At the time, OAM were know to produce primarily kit cars, such as the OAM Cavalier Mk1 and Mk 2. With the release of the Chevalier, perception of OAM would shift from a garage company to a fully fledged automotive manufacturer.

However, this wasn’t to say that the Chevalier fared well in the first few months of production. With setbacks and delays on manufacture, the market the Chevalier was aiming for was swamped by other larger manufacturers, leading to poor sales for the Chevalier. It would almost take a miracle for Chevalier to even sell more than 1000 units. But in 1967, there was one…

In August 1966, 6 months following the production of the Chevalier, thousands of unsold cars littered the car park on OAM’s main Indianapolis factory. With nothing to do there but rust, OAM CEO Benjamin Whittingmore attempted to shift at least 800 cars by the end of the month. However, with noone coming to the OAM factory to place an order, the situation was quickly becoming dire.
However, a film director and entrepreneur Nicholas Spencer needed cheap and reliable cars to perform stunts in his latest film, “The Vice”. After being rejected by other manufacturers due to the low prices Spencer wanted, he turned to OAM. Benjamin, desperate to shift cars quickly made a deal with Spencer to provide him with 5 cars as long as the car featured in the film.
Initially, Spencer refused to feature the car, opting to use the chassis to make replica cars, however, Spencer quickly fell in love with the comfort and driveability of the Chevalier, that he decided to give the car a prominent role in the movie, as the antagonist’s car. 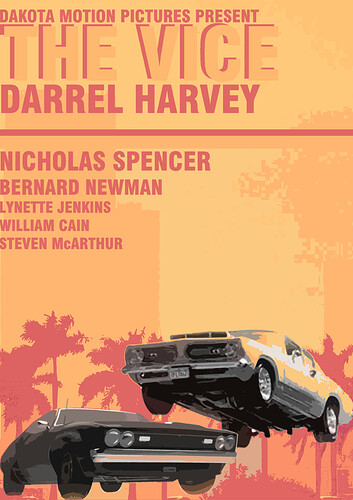 The movie was a massive hit which boosted the sales of the Chevalier and the rest is history.

I have to say, it’s such a good looking car with unique underpinnings and a great story behind it. Love it

The style has carried over really well in EU4. Back looks really good now.

If ever I needed proof that the Chevalier was worth remaking in the UE4 release, this is it. It looks even better than it did previously! 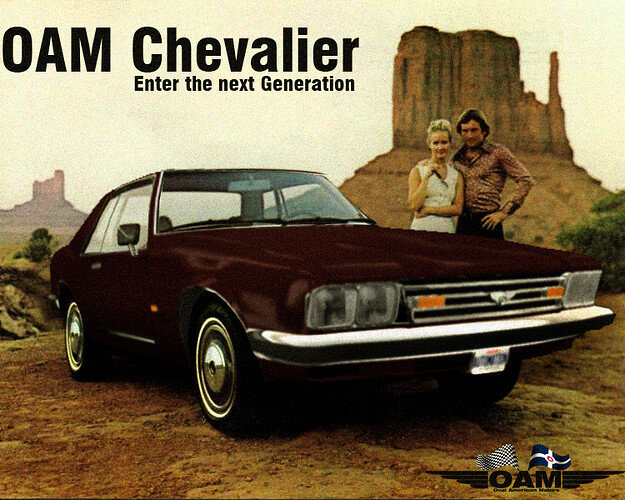 The 1970’s weren’t a good time for OAM. The 70’s fuel crises and the rising Japanese automotive industry led to poor sales figures. This and the catastrophic failures of the OAM Cavalry and the RoadCruiser showed that the industry was changing. With a new CEO, Audie Whittingmore, OAM had to act fast to change their image and rebrand themselves to keep with the times.

While the 70’s were a commercial trainwreck for OAM, they was a silver lining. Two cars stood out from the rest as a success, the OAM Traveller and Apache. What the two cars had in common with each other was that both were small, both equipped with smaller displacement engines and both were very affordable and easy to maintain. Their success was vital to keeping OAM running and most importantly, was vital in influencing the upcoming designs.

Using those cars design philosophy as a base, a new design team from Japan, led by Yuuichi Tomeo and new technology such as computers and wind tunnel testing, the next generation OAM cars were set to be sleek, aerodynamic and most importantly, fuel efficient.

What would come from this were two cars, both released in 1981, the OAM Chevalier Gen 2 and the OAM Phoenix.

Unlike the previous generation, the new “Gen 2” as it was known, was more of a family oriented car. While it retained key elements such as the independent rear double wishbone suspension, the Gen 2 was more sedate, designed with daily use in mind. However, this did not detract from the car’s capability of being sporty. While the 5L V8 was replaced with a 3.5L i6 in the standard model, the more sporty trims retained the V8 in the form of the 3.9L UAC Small Block, found in the Apache. This combined with the new aerodynamic styling and new electronic fuel injection, the Gen 2 was much faster and more manoeuvrable than its predecessor, whilst being larger and heavier.

In 1985, much like the Phoenix, the Gen 2 Chevalier received its a facelift in the form of the GTi series. The chassis was overhauled by ex-Erin engineers who were initial hired to improve the performance of the Phoenix, and were eventually hired by OAM to help design new cars.

First modification made to the Chevalier was the introduction of the new OAM designed “EG170DAT” i6 engine. The all aluminium construction, 4 valve DOHC turbocharged engine was originally developed to be fitted to the Phoenix GTi, was also fitted to the new 1985 Gen 2 GTi. This improved fuel economy and made the Gen 2 GTi as fast as the 1981 Gen 2 ‘Indiana’ with the 3.9L V8.
The next modification came in the form of remolding and redesigning the exterior to be more aerodynamically efficient. With new, more sophisticated computing and wind tunnel testing, the GTi was 20cm shorter and had much better aerodynamic efficiency compared to the 1981 models.

Well since UE4 is now more playable, Ive decided to completely overhaul OAM lore to the point that anything before this post (except the OP) is no longer canon.

Very nice car - the coolest thing about it is the movie poster, though.

The Chevalier now looks a lot better… I reckon it would be a real rival to the Maine Imperator on looks alone! 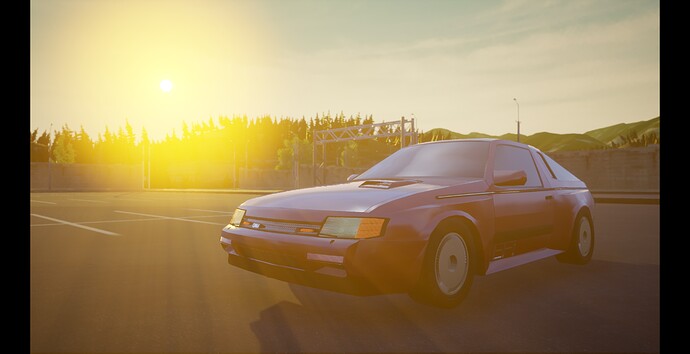 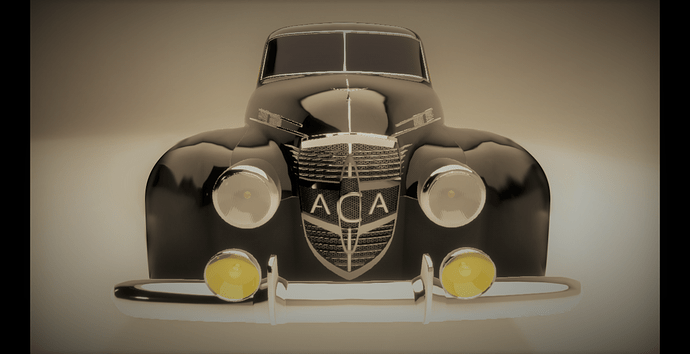 Before we get to the car, here’s a brief history lesson on ACA, the Auto Corporation of America.

Initially ACA struggled to gain much traction in the market, being beaten by the other major US manufacturers. However, their first majorly successful design would come in 1938. This would be the ACA Corona.

Originally based of old sketches found in files in the Lansing Motor Company, the Corona was a full-size luxury car made by ACA. The lead designer was John Emery, who previously worked for Montpelier Motor Works and designed some of their best looking cars. With this expertise behind him, Emery completely redesigned the old sketches forming the iconic design of the 1938 ACA Corona.

Underneath the bonnet, was a large block 440CI Short Angle V8. This produced a maximum of 200hp, which was more than enough to move the car in a straight line. Mated to a three speed manual gearbox with a column shifter, the car could reach 0-60 in about 10 seconds, making it the perfect car for mobsters and get away drivers, something the car was notable for.

The interior was plush and filled with places to store wine and cigars. Some models were even fitted with a phonograph. To top it all off, the price for this car was only $18,450 or about $272,683.27 in today’s money. 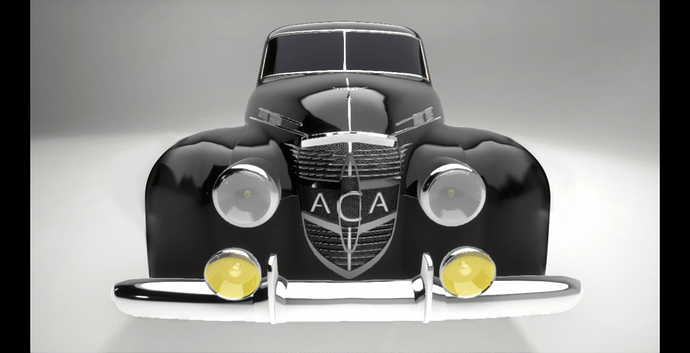 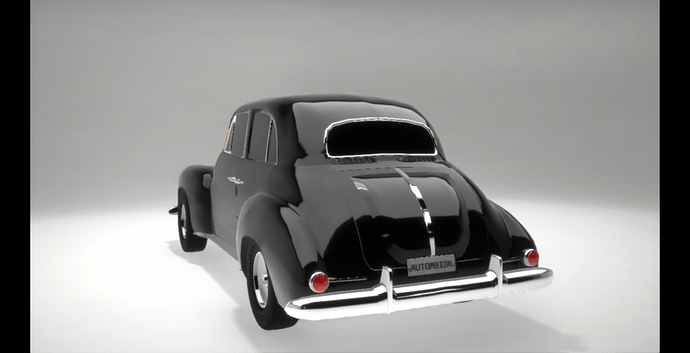 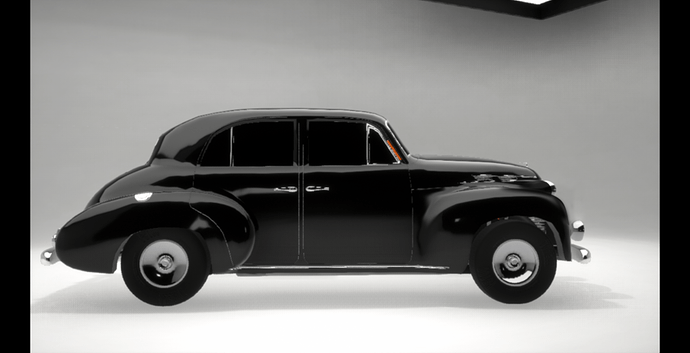 As for the original screenshots,

Really like that one - has a nice, planted stance to it without looking silly aggressive.

This is very sexy. Love the period correctness

Great designs, loved the attention to the details. 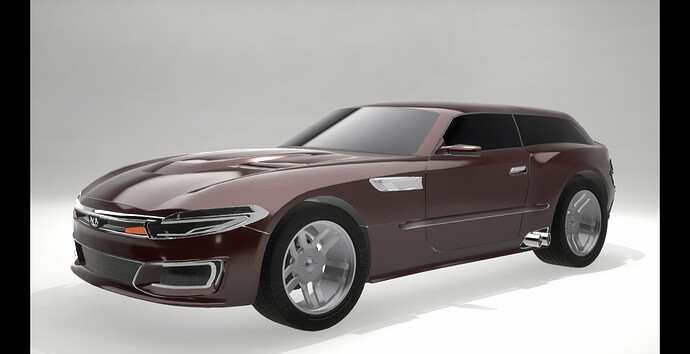 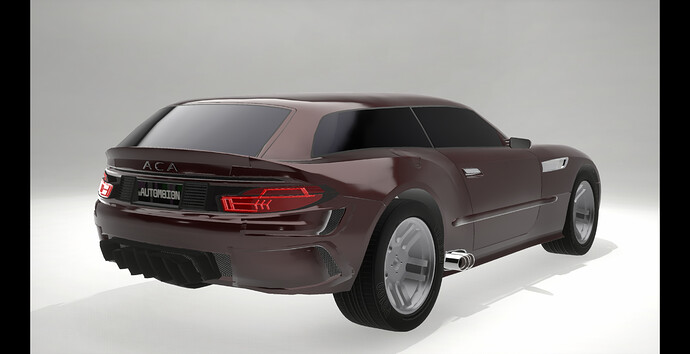 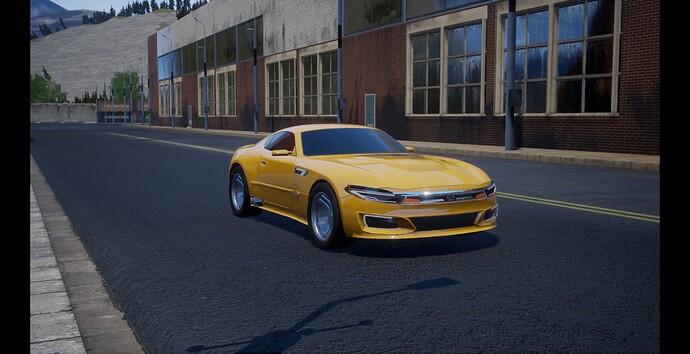 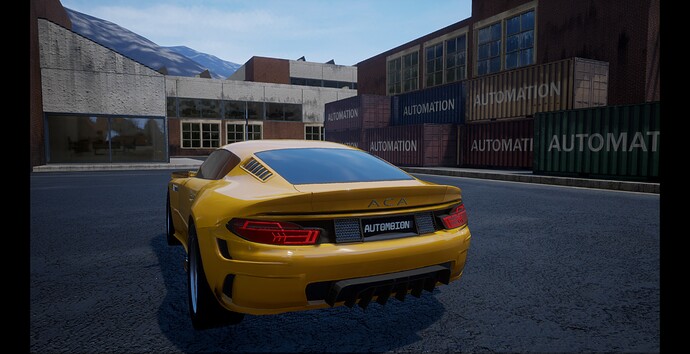 That thing reminds me of an SRT Viper for some reason, side pipes and all. And I would expect a convertible version of it as well!