I AM NO LONGER ACTIVE NOR MAINTAINING THIS SERIES

I don’t want to make a huge deal about leaving so I’ll make this short. I am leaving Automation forums. And in so Automation doesn’t feel picked on, this is in fact very little to do with Automation at all. Here’s why:

A lot of things have happened in the last year but most of all, I’ve discovered that unilaterally, internet social media severely exacerbate my mental health issues. In the last few months I’ve stopped using pretty much everything: Facebook, Reddit, Imgur, Discord servers, etc. Automation was just the last holdout. And? Well, ditching these has helped a lot, especially with time management and with my sleep patterns. Fixing those two has in turn fixed so many more things in my life.

As I said, I don’t want to make a huge deal out of this and mainly the reason I am bothering to say anything at all is so that y’all aren’t shouting into a void, waiting for a response that will never come.

Apologies to those I never got around to reviewing. Take care fellas! It was fun while it lasted.

I might have to send you a car with the express purpose of forcing me to update my lore thread into the 00’s.

That pink “Land Rover” might be the ultimate meme machine outside of a 5,000-horsepower V16 limo. Almost nothing’s going to top that thing. RapidKebab, you are the hero we deserve.

And I might have a car that I could submit…admittedly, it probably (definitely) won’t drive all that great (cheapo viscous diff + 500+ pound-feet of torque = one-tire fires for days), but it could be interesting. 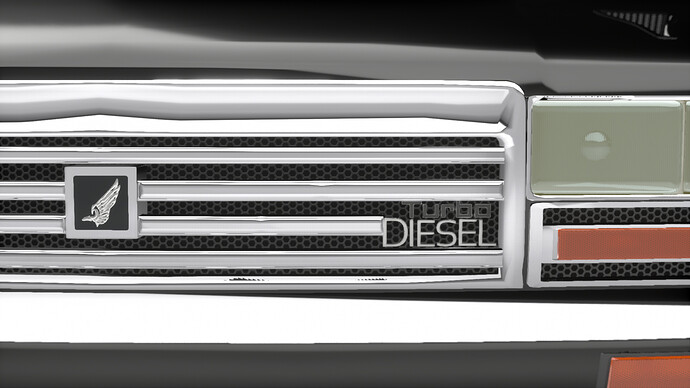 I’m sending you a Bridgell Supergrass lawnmower for review. It is a red unit, refused by other testers. I think they don’t liked the color. It’s a standart 13 hp riding unit. 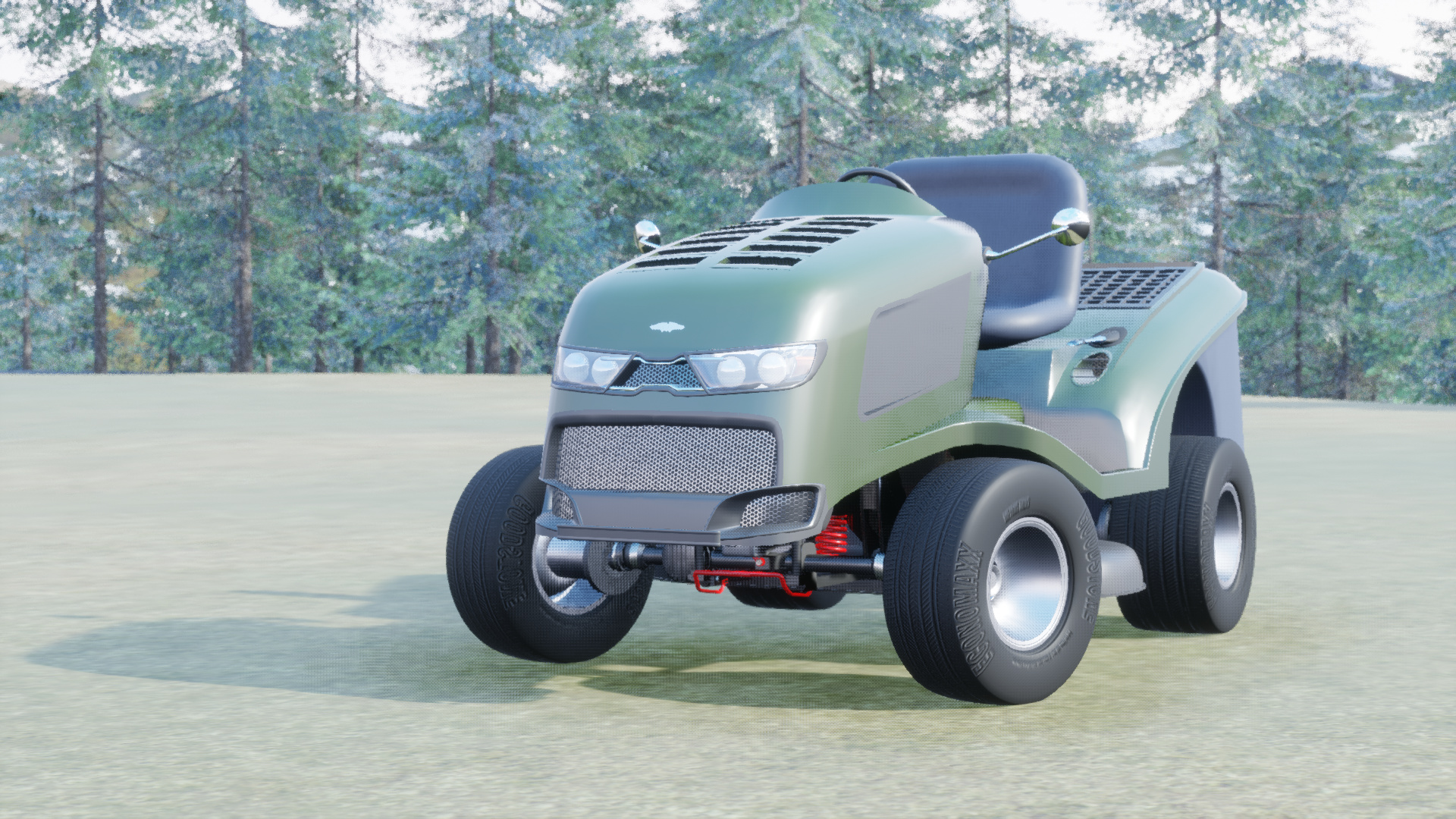 Turbos seem to be working well on your rig so I’d like to send you this: 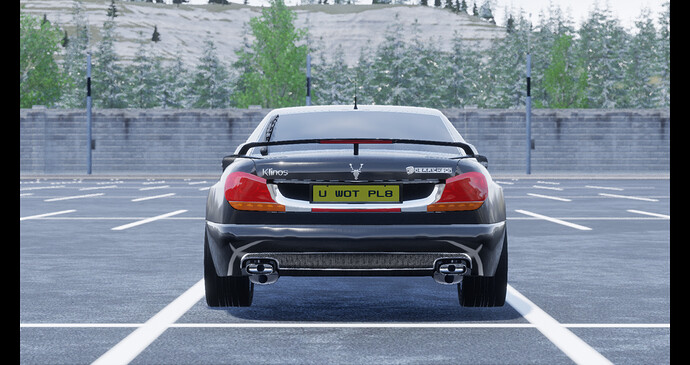 The 1991 FAAL Klinos Kerasion, by Derrickson. Think “Safrane Biturbo meets Lotus Omega”. a Grand Tourer for the person who made it to the top, but still feels connected to the middle class. Only a few hundreds made. 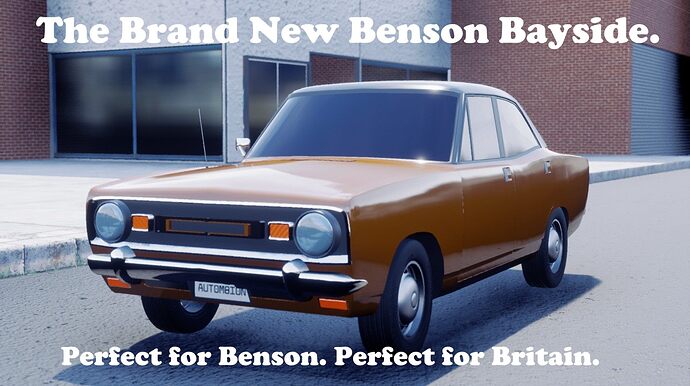 Probably one of the most famous and recognizable BR (Benson and Yard) cars, the pre-facelift Benson Bayside can still be found today in reasonable numbers. The brain-child and final vehicle designed under the last remaining co-founder, Alfred Yard, the Bayside was meant to be a great middle-class sedan, and it was, until it would start to rust away…

(Unfortunately, the .zip file for BeamNG.drive was too big).

1948 Bechov Z1000Z Land Speed Record Car
Kept under wraps until its public debut in 1948, the Z1000Z was the official codename for Bechov’s first attempt at the Land Speed Record. Little is known about the exact specifications of this vehicle, as it was conducted under the direct control of the Government and most details were secret. What was released was that it utilised twin 19.4L V16 engines originally designed for a military bomber plane; one engine was located in the front driving the front wheels, and one engine was located in the rear driving the rear wheels. Power was directed to the wheels through two massively toughened 3-speed gearboxes, each with its own gearstick and clutch (although situated next to eachother), which made changing gears a tricky manoeuvre.

Initial testing was conducted mid 1948 with only one engine installed, and the official figures of a top-speed of over 290km/h (~180mi/h) was released to the public. Unfortunately for Bechov, after the second engine was installed, during testing the car lost control whilst changing gears and was involved in an accident, and thus the proper top-speed was never uncovered. 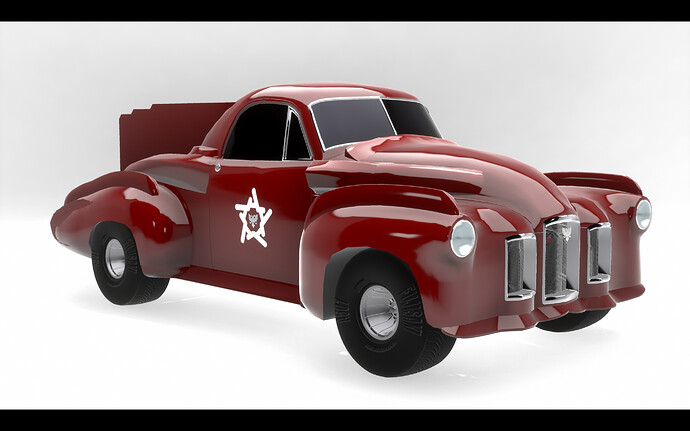 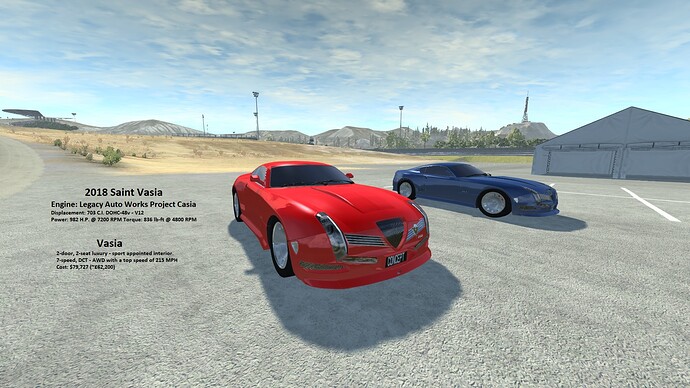 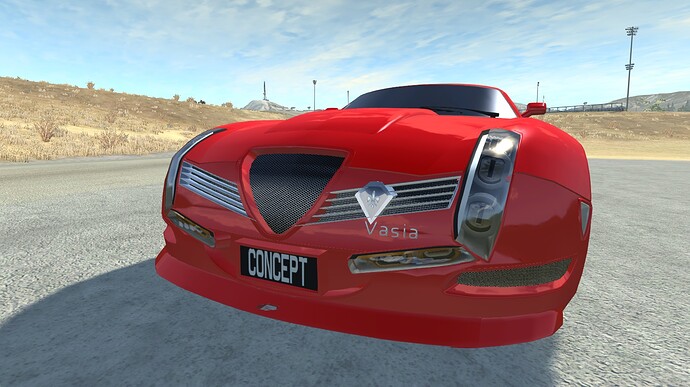 Do you live in a big city with proper, well-maintained tarmac roads?

Do you have a tree-hugging, “save the earth” attitude and/or mindset? 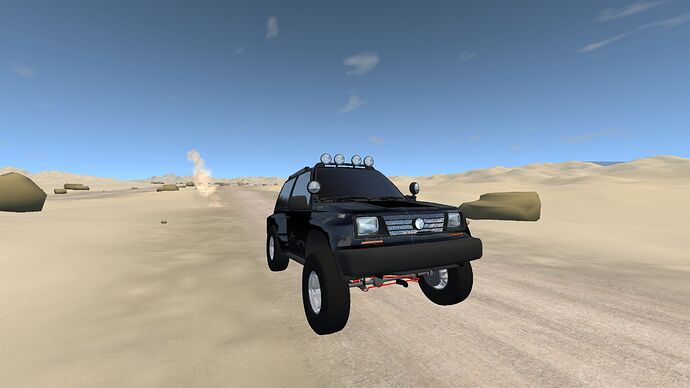 If you answered “no” to at least two of these questions, then this car is not for you!

Kasai Yama. Conquer the hills like it conquers mountains.

We also provide tester units for everyone to try because we’re that confident in our product quality
Kasai Yama - YM08 - Offroad Tune.car (62.6 KB)

640HP! And it seems that the exhaust and rims are messed up because of mods…

So, obviously, I am absolute garbage at suspension tuning

That was awesome. Especially seeing that thing bouncing off the rev limiter on the test track lap.

I like your reviews! The KX8 sounds too powerfull haha
I hope you’ll try one of my cars

I know that feeling of missing mod fixtures FAR too well. But great review of the KX8.

Anyway, here’s one of my favorite cars I’ve ever built. It might be a bit slow-feeling (if my experience in Beam is anything to go on), and it’s definitely got a TON of…different engineering choices, but it should be worth a few good laughs.

1978-1989 Gatz Valerian 600-6TDE (1986 second facelift shown)
Desperation to meet CAFE standards, insanity to even think of such a wild idea, and sheer ingenuity and resourcefulness all wrapped up in a glorious malaise-era sleeper. This thing’s got over 300 horsepower and 500 pound-feet of torque from a truck-sourced 6-liter OHV turbo"diesel" straight-six with multi-point EFI, going through a 4-speed manual to a (really not-that-great) viscous diff at the rear. According to Automation, this thing should be able to crack 145 miles per hour and reach 60 in 7 seconds - pretty fast for the time. Also, this thing was built for fuel economy - all 18 mpg of it -
luxury and sport on a “budget”, so that explains all the technical discrepancies I made with this vehicle. 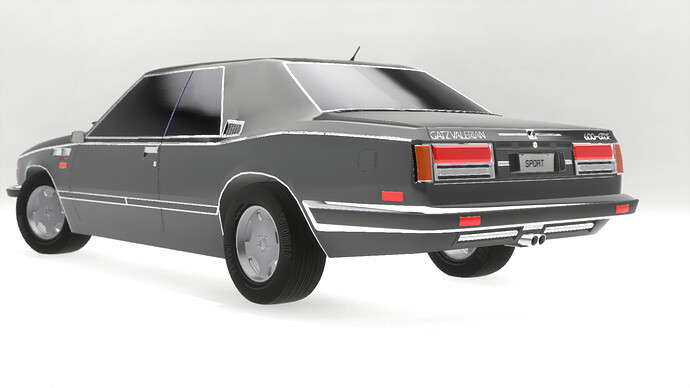 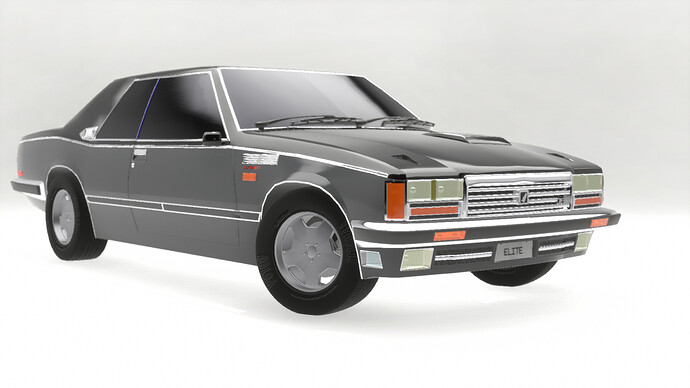 Unfortunately, the .zip file was too big for Automation, so here’s the .car file. It shouldn’t have any mods you need to download (since I try not to use mods when and where I can - which is often).
Gatz Valerian - 600-6TDE Clone.car (61.0 KB)

Hahaha! Brilliant, glad you love it!

It is actually my go-to relaxation car on Beam. I can drive it for hours as well (on twisty circuits).
I don’t have any camera issues, but I think I don’t use that particular camera that bugged out (the chase one?) - although the export is indeed from two or three Beam updates ago.

I didn’t change anything in the jbeam file for this one. A few of the others on my BeamNG mod page have got adapted gear ratios, but that’s all I occasionally tamper with.

On the review itself: good job! Your explanations are clear and enthousiasm (I might be slightly biased here) is contagious. You could probably cut some content and make it shorter (to keep people’s attention), and maybe structure more. Announce in the beginning you will give an overview of positive and negatives at the end for example (for other users that might have had enough after a few minutes, that’s at the 24:50 mark).

What’s the map you used with the american road?