Hi Sir! Lately Ive been making supercars with 600 hp minium and a staggered setup to get rid of the oversteer but to no one’s avail, it has’nt worked at all.{i always tu!ne my car first so the trim doesnt glitch out} This one im showing has 650hp and 709 torque 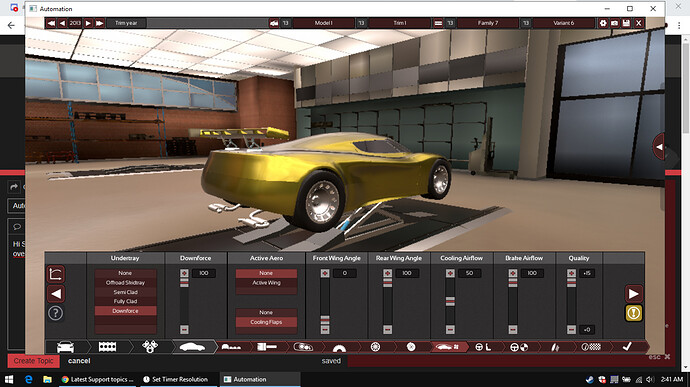 Screenshot%20(70)1366×768 321 KB
Screenshot%20(67)|690x387
But then i realised something. its not a grip problem, the toe is all messed up once my car gets up to speed its fixable but for some reason toe editing isnt in the game. The next update can you guys Incorporate it in the game?

heres where i found my Thesis

I believe I’ve found the cause of the issue. It’s not down force, but rather a setting in Automation you can’t change. A very key setting when it comes to handling and such. That is Toe and I do recall seeing a Caster Setting either. I only ever recall a Camber setting which would explain why at higher speeds vehicles will tend to veer to one direction. The Vehices do not have proper toe and caster resulting in the vehicle not straightning itself out at higher speeds.
Last edited by Rykhath; Jul 15, 2018 @ 5:29am

I am writing this discussion mainly to assist me of figuring out whether it is just me, or the game’s error. So far every vehicle I have created in Automation that I’ve exported into BeamNG.Drive has been unable to control at high-speeds. Depending... 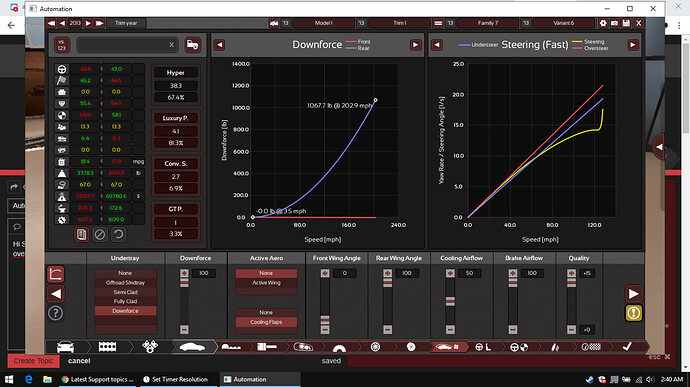 I mean, looking at your aero graph and steering graph, I think its more of an issue with your suspension/aero tune rather than the game missing toe and caster adjustments. 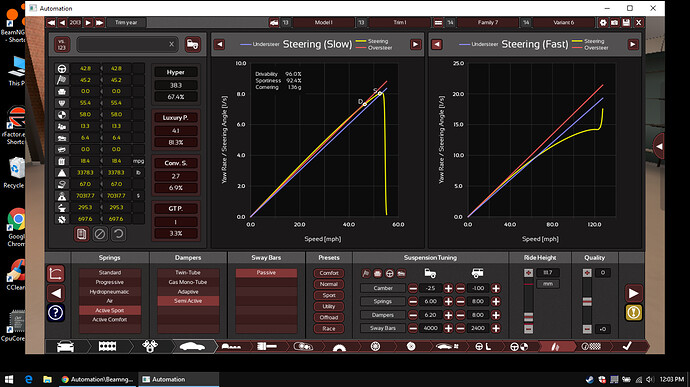 Here is my suspension Tune Causing this

I’m not sure (because I’m always learning the game and the graphs) but isn’t it the issue?: 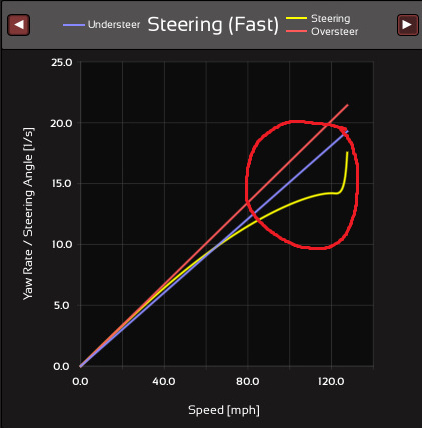 That how it looks on one of my sports car that’s imo nice to drive: 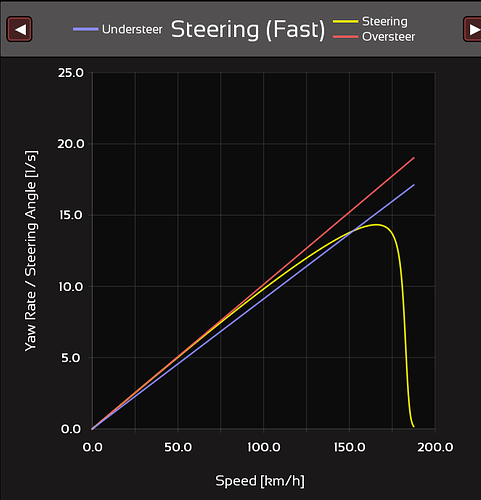 Model 1 - Trim 1.car (24.6 KB)
Heres my Car. i drove it and the front end is not stable at 180mph the whole car spins out in beamng at speeds waaay lower than that like it doesnt have 345s in the rear can someone explain to me whats going on because its reallly hard to make a supercar in this game with Rwd and without a spoiler For me Can someone plz explain

is this open beta or closed beta?
but yeah It might just be your aero tune seeing as you have 100 on the rear wing angle and 0 on the front wing 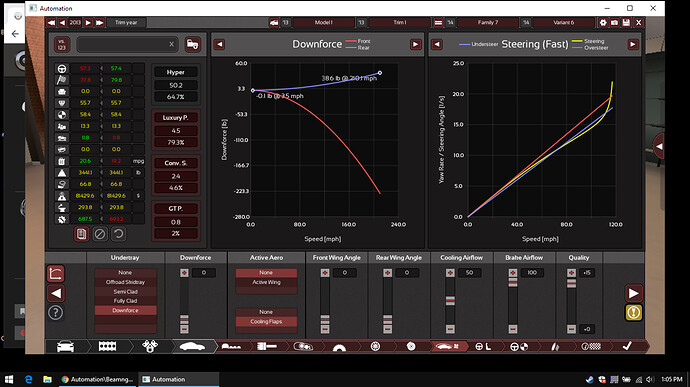 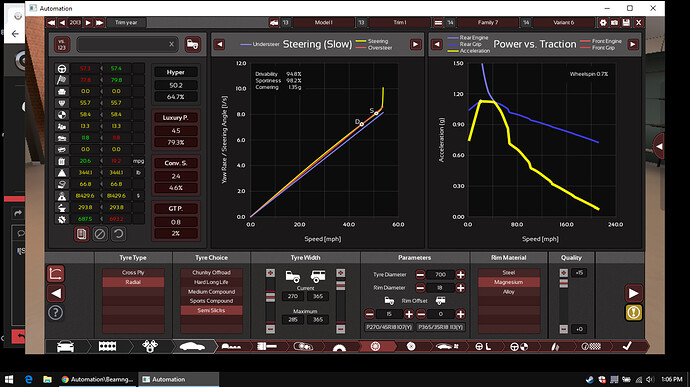 what can i do?

Try not to double post but heres what ive done. 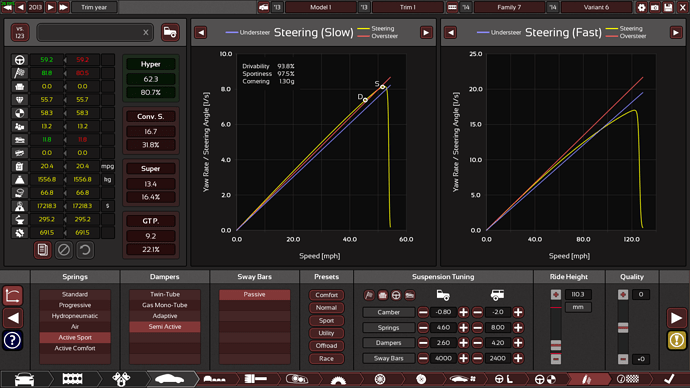 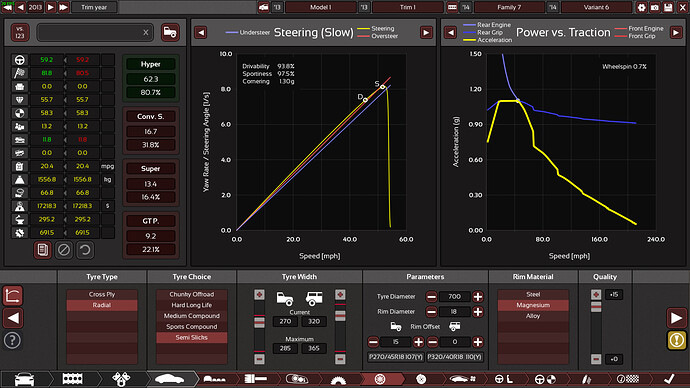 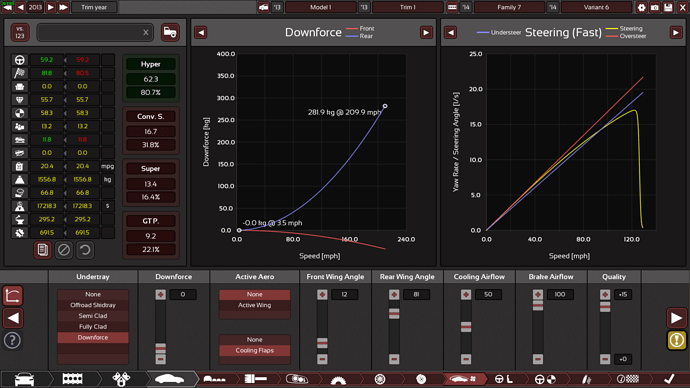 its just adjusting the steering graphs so they dont cause severe oversteer
Will it handle better in beam? No clue havent bothered testing it in beam, but it should oversteer less

also note ive added a wing to the front. its hidden so it shouldnt be too obvious 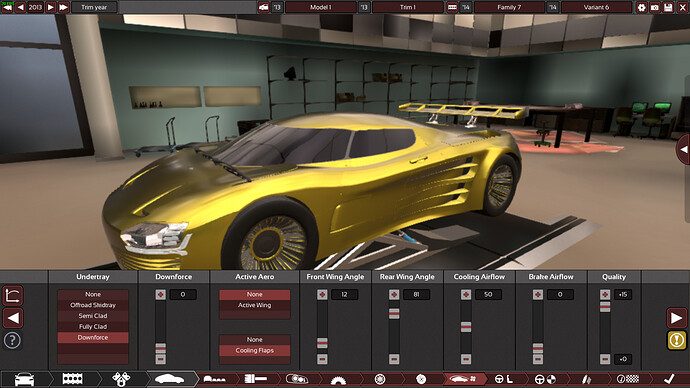 in Beamng Drive with your tune my car suddenly veers to the left at 140 mph Could that be toe or Lift being generated instead of downforce? if so how can i fix it
Heres another source that backs up my claim

Rykhath has Automation - The Car Company Tycoon Game Jul 15, 2018 @ 7:10am
Yeah it’s definitely toe in/out issues as the game doesn’t support Toe Customization. I hope they add Toe Customization soon to fix the issues of Veering Right or Left on some cars.

100% Confirmed just looked in BEAMNG.Drive on tunning page and Front Left has -0.071 toe while front left has 0.020 Toe and rear both at 0…I Have no clue How one wheel can have toe in while the other has Toe out, Explains why some vehicles have control issues where it will veer without input

How can i Fix This?

it might also be due to your swaybar settings, its an MR, but the rear swaybars are quite soft.
For a better explanation

Intermission 1 – Sway Bar Top Tips Since the whole purpose of this pilot is to try to standardise tuning for Beam, here’s the first in a series of “How to Tune” which will go a long way to explaining the way I critique how cars drive. As I mentioned before, sway bars and their effect don’t really show up on the Automation metric. In fact most of the metrics they change are more to do with the roll angle which affects “comfort”, and literally the weight balance on the car which is miniscule comp…

Do you want to ‘fix’ the toe of stock BeamNG Cars while you are at it? 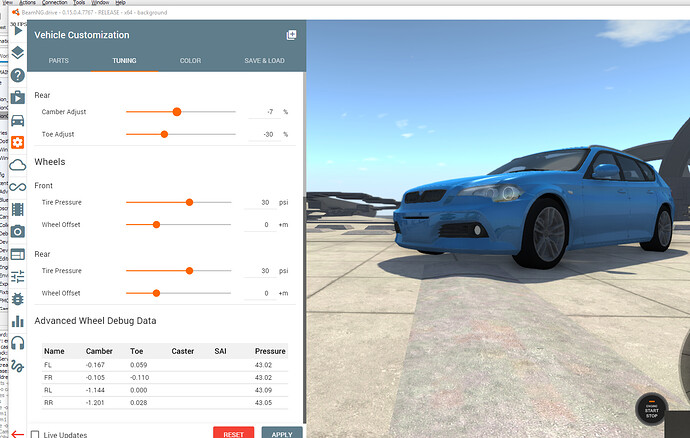 BeamNG is a total marvel of technology, with their soft body sim and all of their cars are hand tweaked to be the best they can within their simulation. Car Instability at high speed is probably a combination of things, such as the chassis and suspension sub frames not being stiff enough so exhibit oscillations and bad aerodynamics surfaces generated. Transferring weight off the front wheels with speed.

We have to put in margin on how stiff the the soft body is, as when you push it too far, the cars just tear themselves apart. We do need to revisit the aerodynamic/lift coefficients at some point.

I don’t really make supercars, but your rear springs seem really hard - normally not a good thing on a MR car!

Even with such stiff springs, since the car is so low + extreme downforce, it may be possible that you are reaching the limits of suspension travel?