Welcome to the ABL: The Automation Beginners League! 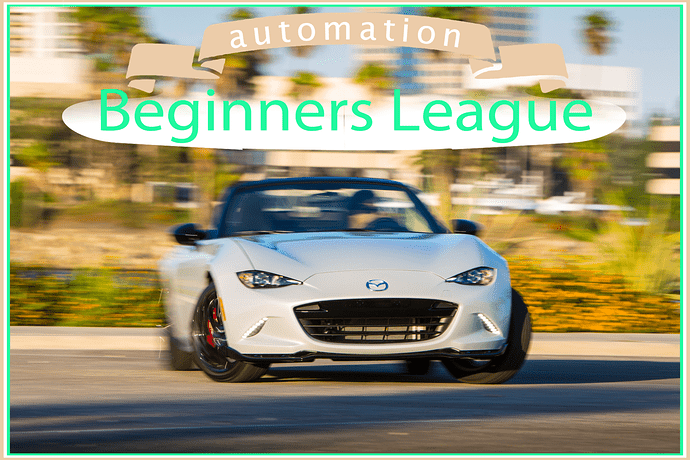 overall banner.png1680×1120 1.59 MB
The ABL is a championship of friendly car-building amateurs that welcome any new entrant. The idea behind this challenge is just this: simplicity. It’s a very flexible but uncomplicated league that allows for creative thinking but also allows a beginner to stretch their limbs and gain experience designing competitive cars. In the end, we’re all in it to have fun. This challenge is a tribute to the hopefully temporarily fallen ATC.

Here are the rules that will always be the same across almost all years of the ABL:

Here’s a few things never to forget, should be common netiquette:

is pretty much the brains of the operation. He recieves the entries and scrutinizes them. The racemaster also sends cars around the tracks chosen and records times. He announces winners and handles issues.
Writer and secondary racemaster: @Nomade0013
Temporary Challenge Host: me, @ramthecowy
I pretty much keep the challenge running, and help the racemaster answer questions and handle issues. Together with the racemaster we listen to the community to decide on rules and regulations. It’s my job to verify the racemaster and all participants behave appropriately and create a safe and positive environment.
Advisor: @Darkshine5 he will be providing me, Nomade0013 and FrankNSteinwith tips and information on how to keep a challenge running smoothly with his experience of running two of the most popular challenges of Automation history.

This scoring mechanism is very basic and may be changed in the future, however, any changes won’t be made until the first season of the 80’s
###Round 1: 1970/1971

Great! So I’m the challenge host for this round. Goal achieved! Welcome to the ABL: Automation Beginners League! [image] #Round 1 of the ABL in 1970/1971! ####Rules As stated in the OP: The body cannot be more than 10 years older than the year in which this race takes place. In this case that would be bodies unlocked between 1960 to 1970. Maximum tyre width is 245mm/~9.6 inches Maximum cost is 18000 at 0% markup Minimum safety of 35 Minimum average reliability of 50 Minimum cooling for e…

Welcome back to the ABL, it’s time to move on to a whole, fascinating and fresh new round 4, it’s: #1976/1977! [image] So yes, we’re taking it easy this round, starting off with just a power-to-weight limit! ##Rules Maximum tyre width 245 mm Any undertrays allowed Maximum cost is $17000 at 0% markup Minimum weight 1000kg/2205lbs Again, they need to run on Regular fuel (91 RON/87 AKI) Advanced safety required Maximum one lip, no wings ##Banned stuff Negative quality sliders V12s LMP and o…

Welcome back to the ABL, it’s time to meet a whole, fascinating and fresh new round 5, it’s: #1978/1979! [image] ##Rules Maximum tyre width 245 mm Any undertrays allowed with a maximum of one wing and one lip Maximum cost is $17000 at 0% markup Minimum weight 950kg/1984lbs Regular fuel (91 RON/87 AKI) Advanced safety required ##Banned stuff Negative quality sliders LMP and other endurance style bodies Any other engines that are not one of the two base engines supplied ##Engines A vari…

Welcome back to the ABL, it’s time to meet a whole, fascinating and fresh new round, it’s: the best of the 70’s race! [image] Yes, we cooked up a surprise for you guys

@Xoury, @Newtonmeter, @AirJordan, @koolkei and @nialloftara, you have been chosen to participate in this intense battle for top spot. Your cars will face stiff competition and the one who triumphs around the demanding banked turns of the Green Hell will have their name embellished as the winner of the decade from 1970 …

Welcome back to the ABL, it’s time to meet a fresh new round! Now, it’s round 7, it’s: #1982/1983! [image] Before we go though, just a word about Automation. You don’t need to opt out of the open beta, just use the Kee engine build and export from there. We won’t be using the UE4 release for a while. ##Rules Mid/rear engine placement Maximum cost is $15,000 at 0% markup Regular fuel (91 RON/87 AKI) Advanced safety required 245mm maximum tyre width ##Banned stuff Lips and Wings Negative q…

so to just start a brainstorming process:

create some more specific rules, to match the years technology and so we do an actual touring challenge, not a F1-ish championship.

Maybe this time we could set a specific safety rating like mentioned before. Mybe we could start with the season 70/71 and set the minimum safety to 25 and increase it the next round to 30.

I could imagine balance of performance(experience) system. Like if you won the first Year you s get somekind of a 1s penalty the second a 0.8 and so on. Or you had to biuld a complete new car with other engine. So something like the jericho had to improve alot over the years, or had to be replaced

I liked @AirJordan idea, think it should be worked a little more, but it is interisting. Maybe we could took the 5 bests and put to a above category, or something like that at the first round, then every round 2 guys go up and 2 that are at the above category go down. So we would have two categories.

Or this time penalty system, both are interesting.

I think we should definitely do something like banning really advanced tech like DOHC until we reach an era where it becomes more prevalent. DOHC in the 70’s is a little overkill.

Two leagues would be nice too. But we would need more submitted cars

The idea of two leagues would be for when we got more racers. ATC used to be almost 20 cars, if we had 10 would be enough to make 2 leagues of 5 cars.

two leagues is plausible but it will turn into chaos if they both run at the same time.

Alpha Romeo used Dohc in the early 70s if i make no mistake. So i think it is not to uncommon in this period of time. But they used it on smal engines. So i think DOHC should have a size limit like 2-2.5L. OHC a max of 4L OHC 4,5L and push-rod without limit.

That’s true. At the 60’s DOHC was crazy, but to the 70’s this rule sounds fair.
What else do you guys think? I think there should have a weight limit and, maybe, a budge limit, since is a begginers league.

I know I’m not a beginner but I find this track time challenges amusing so…I thing two leagues would be a mess and wouldn’t put competitors closer together. Banning people from competition maybe really is not the right way… Penalties sounds better in my opinion, maybe similar to how WTCC does it, with weight. So if we keep the lowest weight, the first 2 get 10%, 5% increase.

alfa wasn’t mass-manufacturing DOHC engines for commonplace use back then though, so I think we can ignore that.

Will leave you guys to discuss weight penalties.

If we set a specific safety rating the minimum weight could be different, but i think with the different engine sizes and the needed engine bay volumes (needed bigger bodys). I think it could be balanced.

And i really would like to see smal DOHC engines against big push-rod engines.

So i just build two cars. The First a 10L V8 Push rod Americans style car. It needed basic safety to get to a rating of 30. The smal british coupe with a 2.5L I6 DoHC engine needed advanced safety fo a 30 rating. Both cars are pretty simialr biuld. The big American was at about 15000 the small one was at 11000. But as you can see the lap times matched really nice. 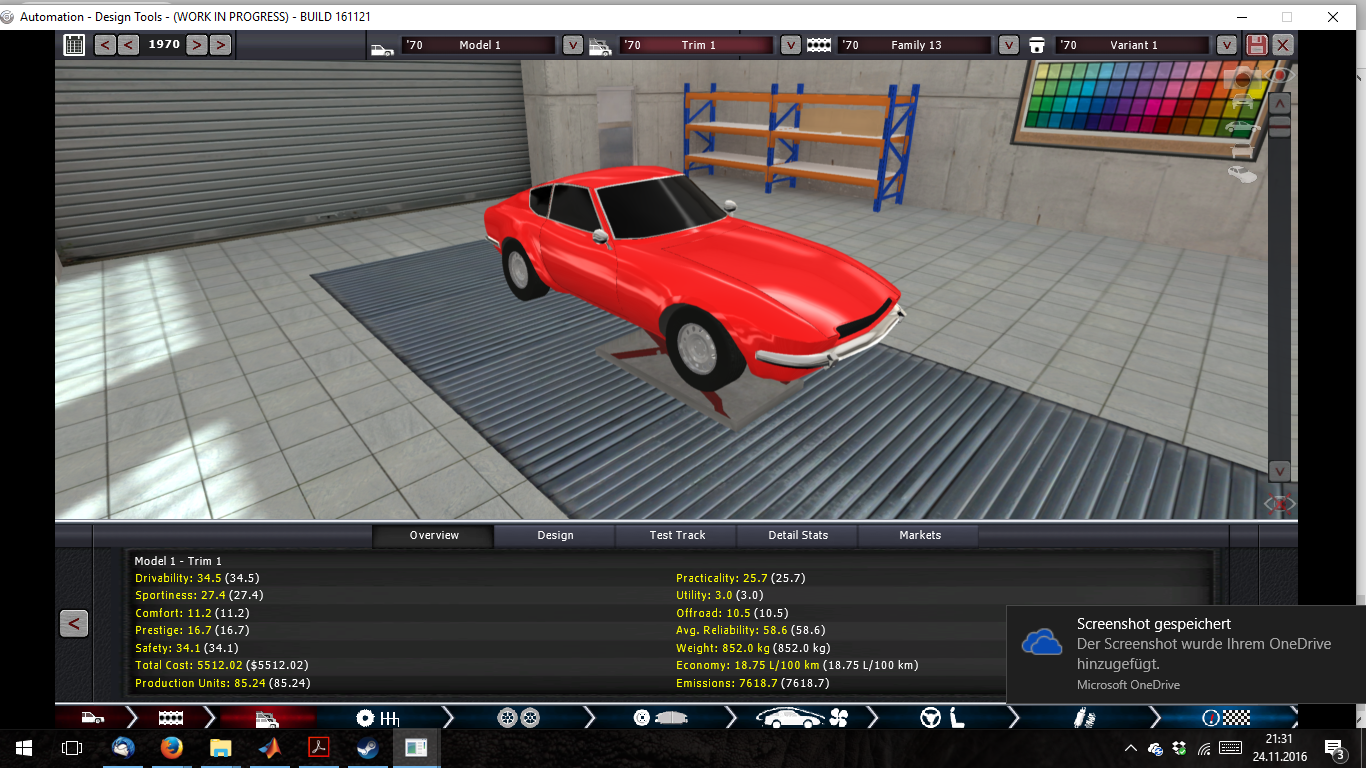 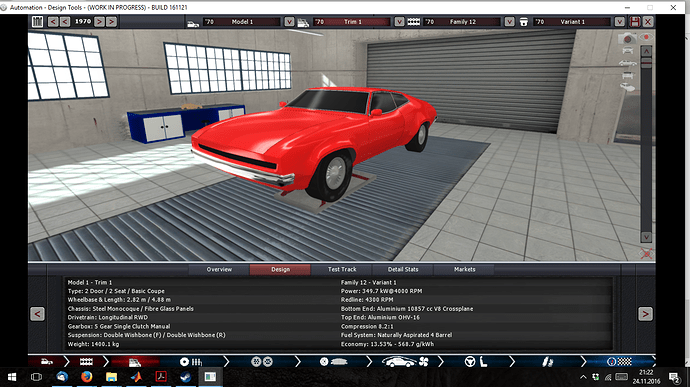 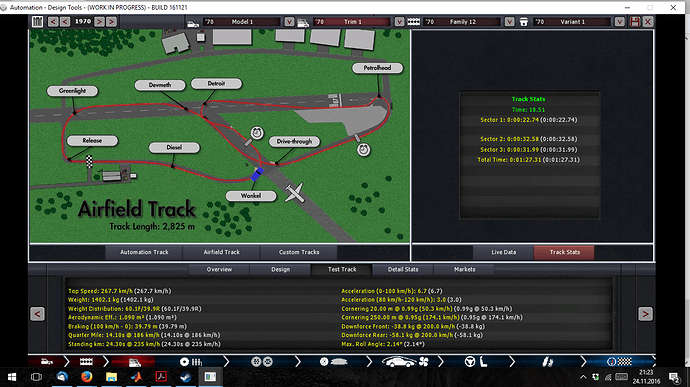 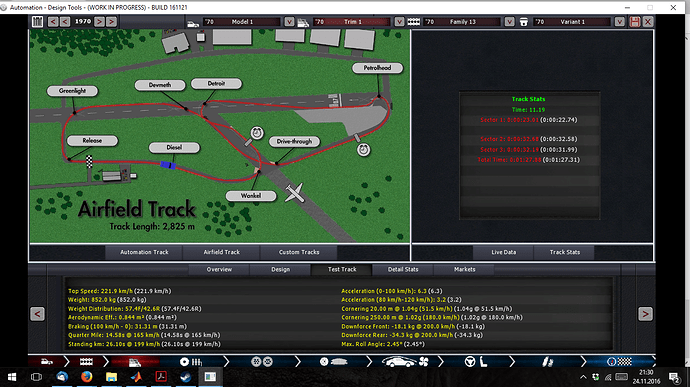 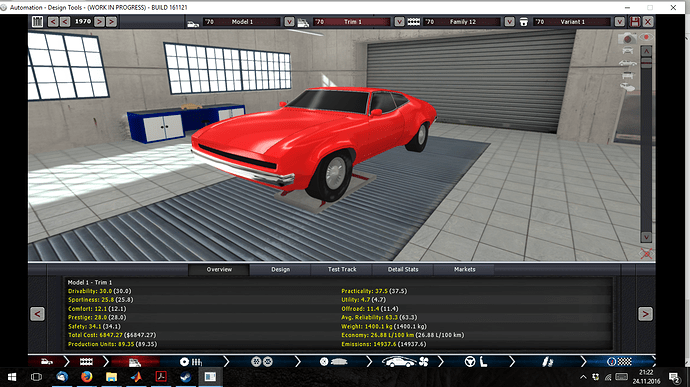 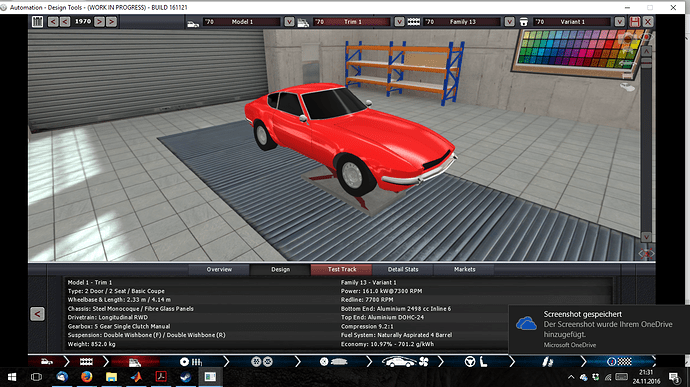 I may have some good ideas for regulations that make it fun and accessible. maybe.

tell us, don’t be useless

I don’t think that is a very valid point there. You have 2 different chassis with different cd, weight, weight distribution, tyre size…and there is suspension tuning that can affect seconds… so actually levelling pushrods to DOHC migh prove a bit more complex.
Maybe at least try that on same body for start

replaced the engine of the american car to a 4.5 ohc 32v V8 and got again similar lap times.
The 5.0 V8 had a comparabel engine power to the 4.5 ohc 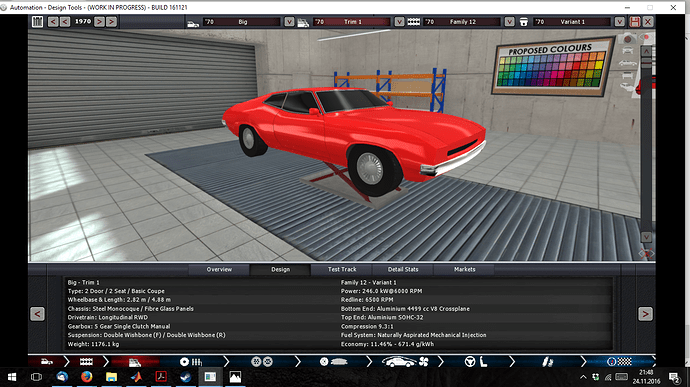 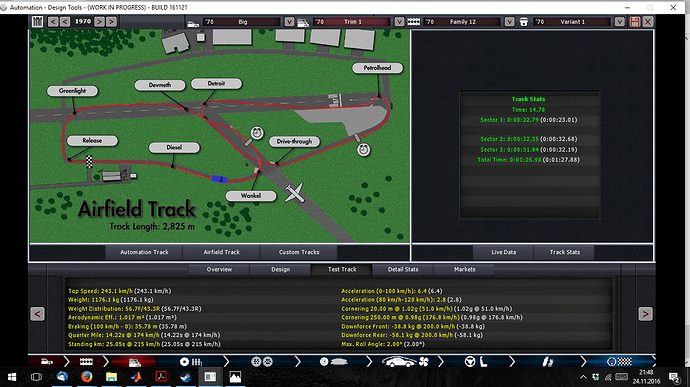 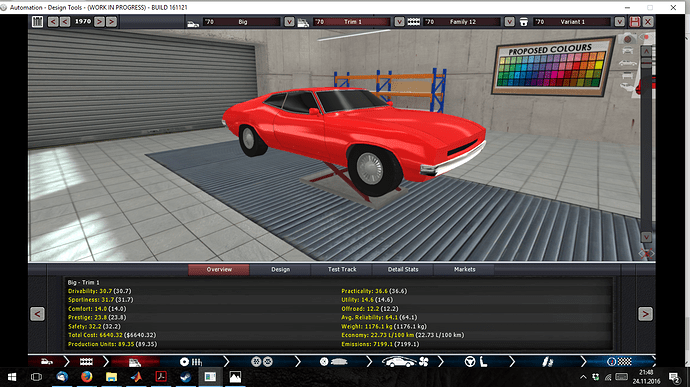 Maxmimum Engine size:
DOHC 2.5L (only inline engines (so only 2cam would be needed, a v would need 4)
OHC 4.5L
Direct OHC 5.0L
push-rod without limitation.

psst, don’t multiple post. Just use a line break to signal an end to what you’re talking about and then use tags to address specific people like this @personyouwanttottag

I think penalties could be given not only on weight, but on total cost, engine or tyre size. WTCC, BTCC and all others use weight because it’s very simple to measure and to change, where as measuring the money spend and engine capacity is impractical, if not impossible, in a racing situation, as for tyres, irl there would be logistical issues. But automation has none of that, so there are 4 possible, effective penalties that can be given.

I think they easyest way would be weight or time. because every car could use need a other tyre size. And if you say you have to become some kg heavier you just could use a radio or other seats, so the weight would be placed kinda central

And i run another car with 3 different engines. Same Tire size …
Again a 10L v8 push rod
a 4.5 ohc 32v
a 24v i6 2.5L
Brakes Tires are same, cooling and gearing was tuned. Suspension set to sport new per car. 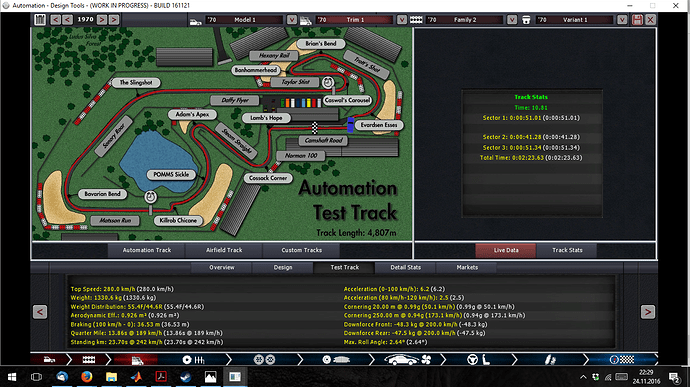 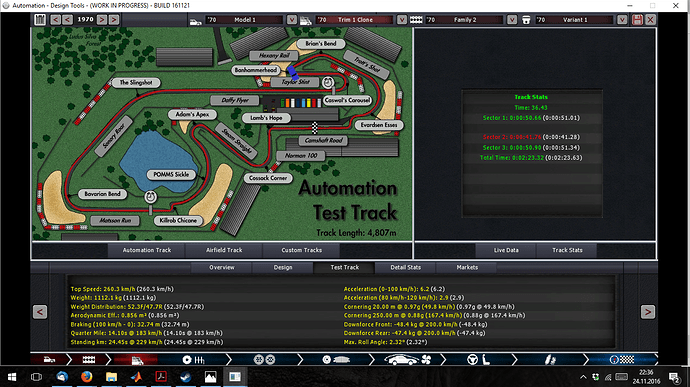 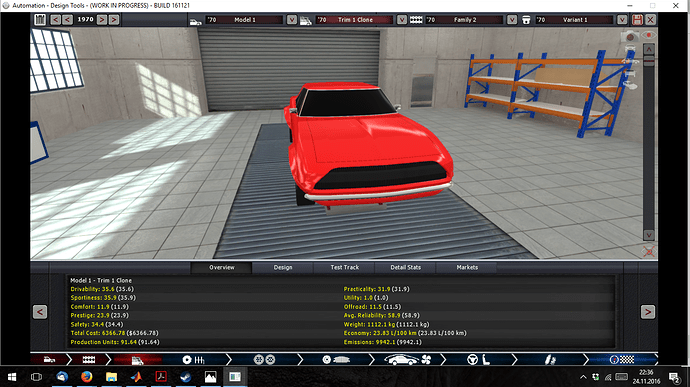 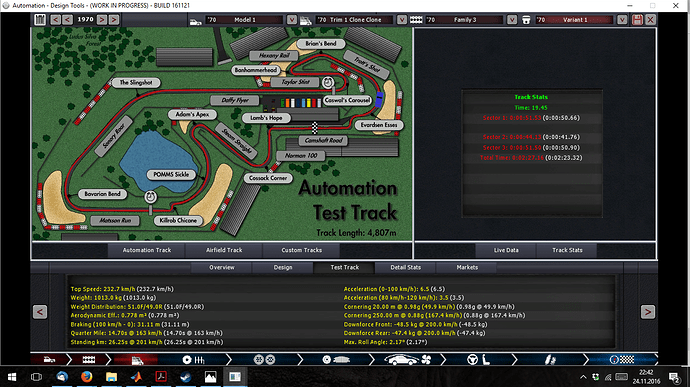 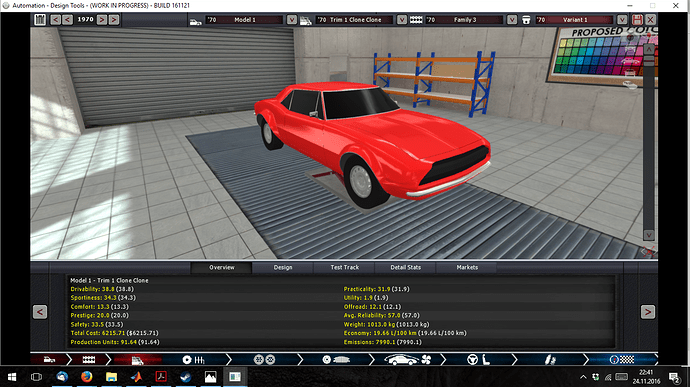