The Di Inferi or Dii Inferi (Latin, “the gods below”) were a shadowy collective of ancient Roman deities associated with death and the underworld. The epithet inferi is also given to the mysterious Manes, a collective of ancestral spirits. The most likely origin of the word Manes is from manus or manis, meaning “good” or “kindly,” which was a euphemistic way to speak of the inferi so as to avert their potential to harm or cause fear.

Di Inferi is an Italian high-performance automobile manufacturer, established in Ravenna, Italy, in 1918. It specializes in high-end luxury and performance, while also branching out every now and then.

What better way to start a thread than this?

As Di Inferi’s most advanced internal-combustion fighter for the road, the Prototipo Dieci (Prototype Ten) takes no prisoners. Instead, it holds you down, tears your internal organs to shreds and sets a blistering lap time while it’s at it.

The internals consist of a twin-turbocharged 4.1L V10, producing upwards of 915 horsepower. It weighs 1144kg, and due to having the tendency to puncture eardrums (among other things) is not road-legal.

The Dieci was featured as the cover car for Automation’s update on April 11th, 2019. 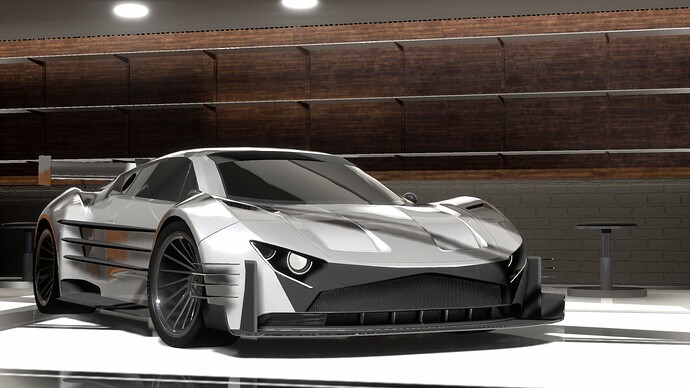 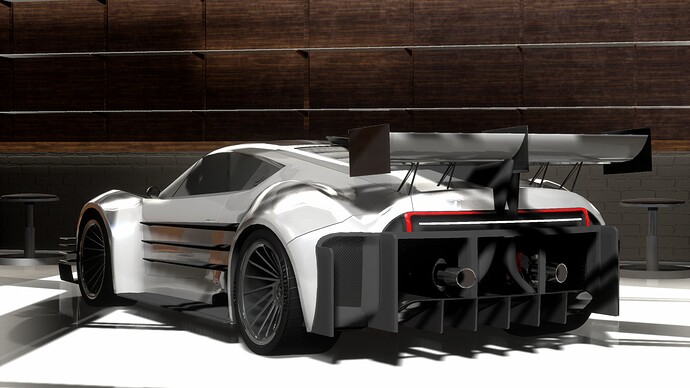 Edit: The Strada is not quite as unhinged as the balls-out, big-winged Dieci, but it still looks and feels every inch a supercar - which is exactly as it should be.

Due to popular demand, it had to be done. 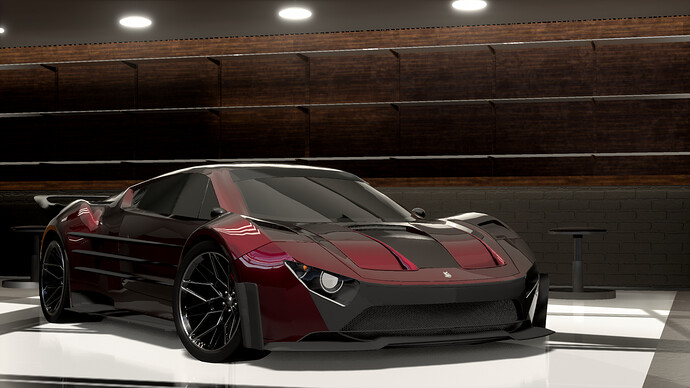 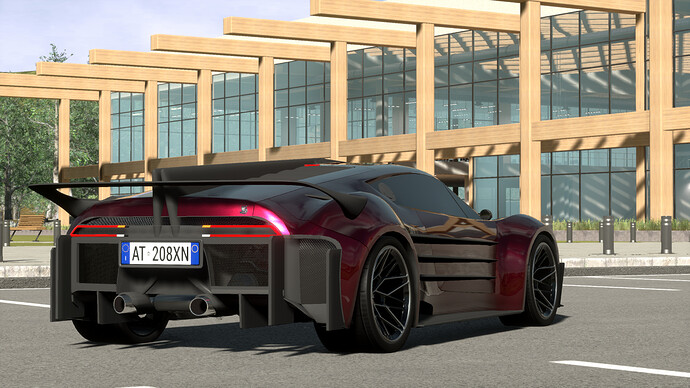 The Dieci’s road-legal sister, the Dieci Strada, produces slightly less power, and weighs a little bit more. On the upside (or down, depending on how you look at it) it’s also slightly less murderous. The example shown here is finished in Rosso Ultramagnolia.

Yasssss lets go!! Long awaited by many, I can’t wait to relive your designs

They will provide inspiration for many new people. I speak from experience there

The Di Inferi B12 (Berlinetta 12) is a Super GT car, meaning it can take you thousands of miles very quickly, yet also very comfortably. The 525hp 5.6 liter naturally aspirated V12 engine provides a smooth power band, and the sleek, aerodynamic design makes it look like a speeding bullet. 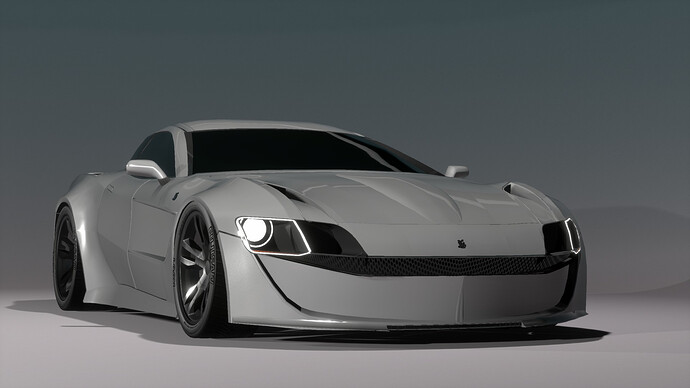 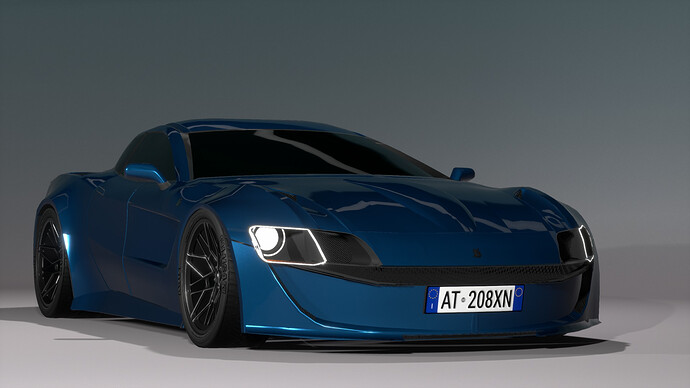 This is a special edition of the B12, named the Berlinetta 12 Finale, or B12F. This car is quite sentimental to me, as it was, for a while, what I assumed would be the last car I’d ever make. 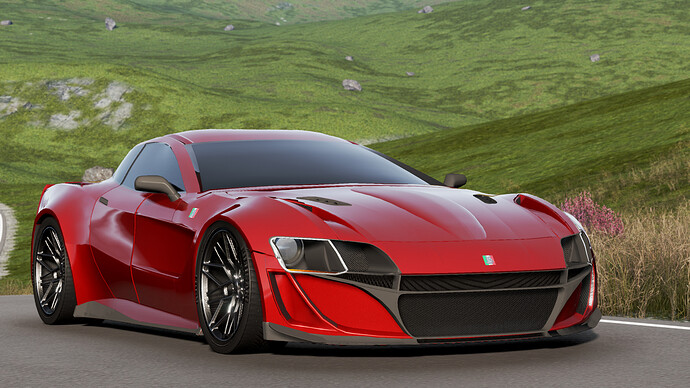 This car is probably what I’d consider my best work, and definitely the car I spent the longest on. The power has been increased, the weight has been reduced, and the design has been heavily reworked and improved. 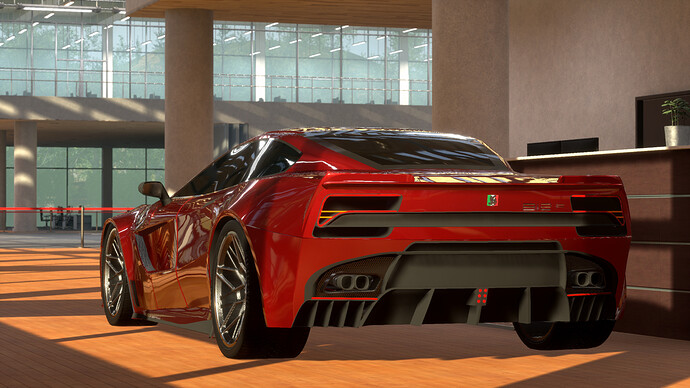 This is the Di Inferi B12F-B, abbreviated from Berlinetta 12 Finale Barchetta. 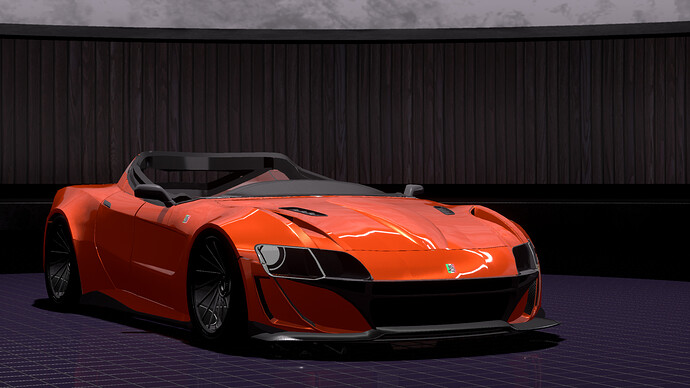 Then it turned out the Finale wouldn’t be my final car, I decided to go back to the B12F and have a little fun. The B12F-B is mostly just a design exercise, but was still a very fun one nonetheless. It’s much lighter than the B12F, and has very little in terms of driver comforts. It doesn’t even have a roof! 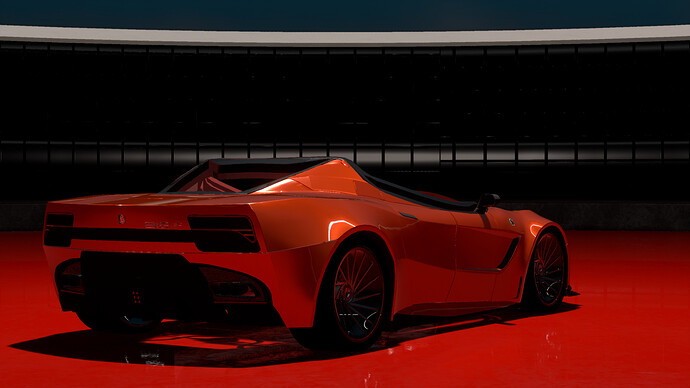 I have never been so impressed…

This is the Di Inferi Catania. 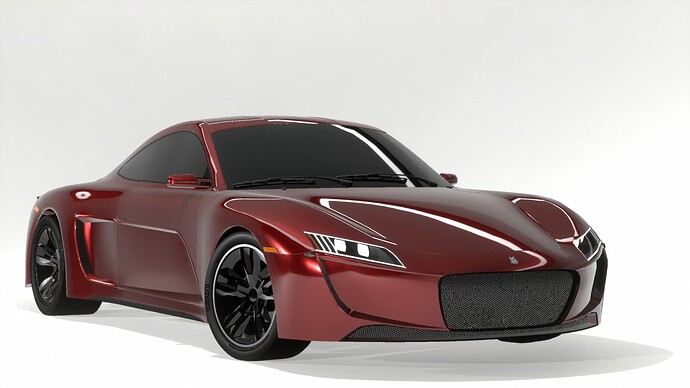 A lengthy Grand Tourer available with 2, 4 and 5 seats, the Catania lets its purring V10 - available with either 378hp or 556hp for the road going trim - do all the work while you relax in the luxurious cabin. 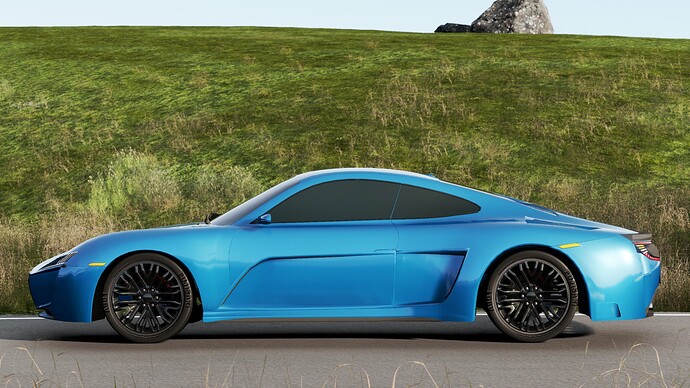 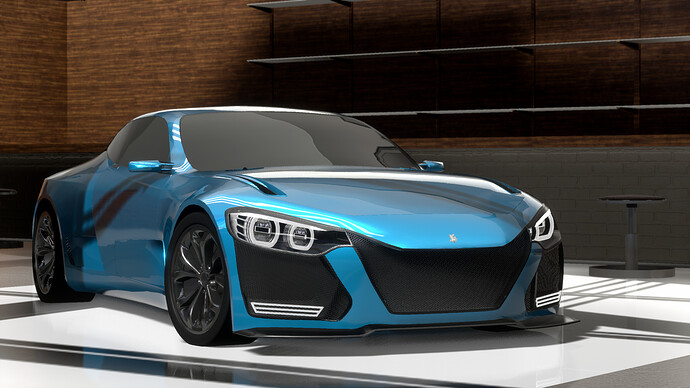 This is not my most complex car, as it was designed around early 2019. It hasn’t got very many fixtures, but still works well in my opinion. It’s powered by a rather devious high-displacement V8, and goes like a rocket. 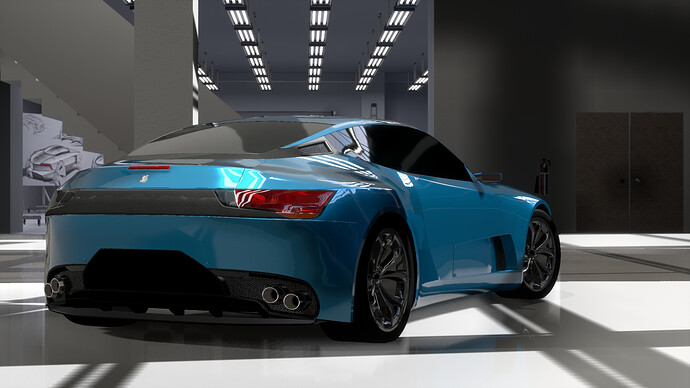 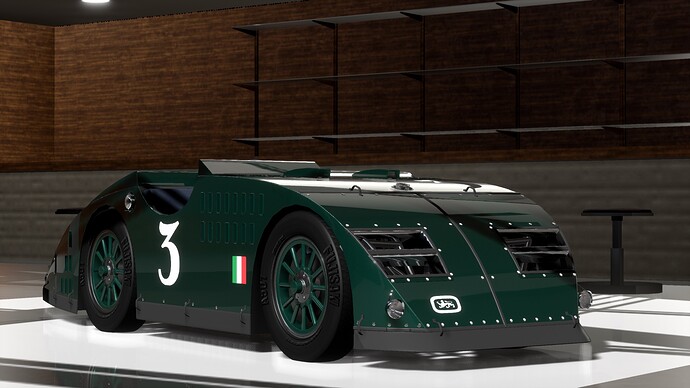 This is lore-wise one of the first cars made by Di Inferi. It only makes 105 horsepower, but it’s essentially just an engine with a shell around it.

You better be careful, because there is no driver safety to be found here.

Unfortunately, this car was one that I forgot to send over to an USB-drive before I got discharged from the military, and is therefore lost. 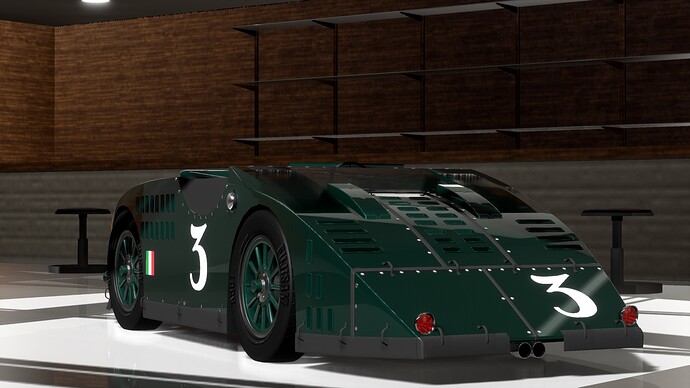 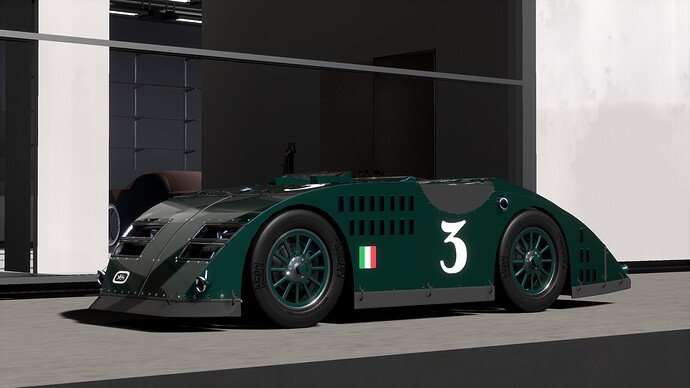 sad to hear this relic of time being destroyed 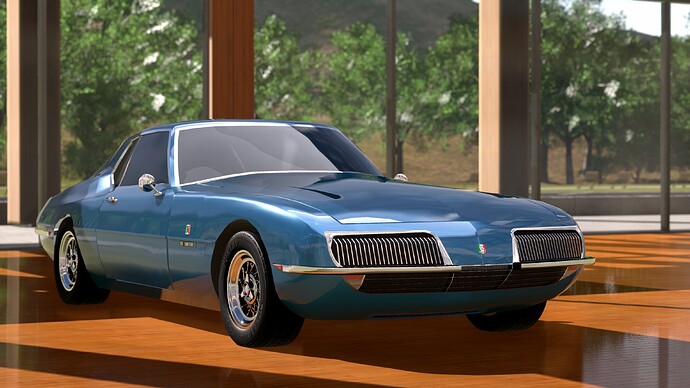 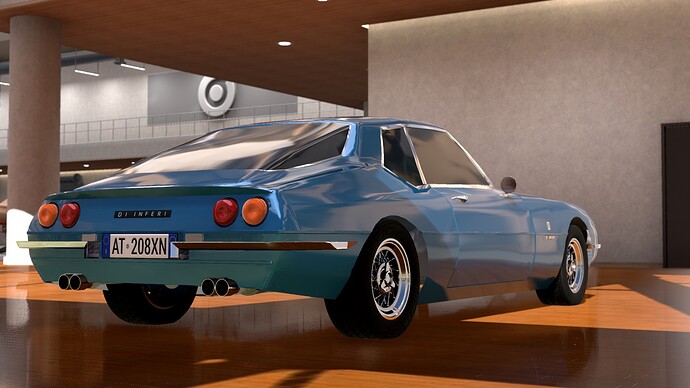 Sleek, and a little angry. Just like a Di Inferi should be.

Sleek, and a little angry. Just like a Di Inferi should be.

Exactly as expected. I’m assuming that the Spettro is a bottom-breather, with its grille below the front bumper - the apertures on the top are actually where the headlights are concealed.

That’s right! As you said, the bottom grille is where the car actually breathes from, while the two top “grilles” conceal the headlights. You’ll see it more clearly when I upload the racing version later.

Beautiful design, looks like it would take on a studebaker a avanti or a corvette. I haven’t tried this body yet as I thought it would always look too much like an SM but might give it a go soon

This is a special version of the Dieci, named the Corpo Infernale (Hellish Body). 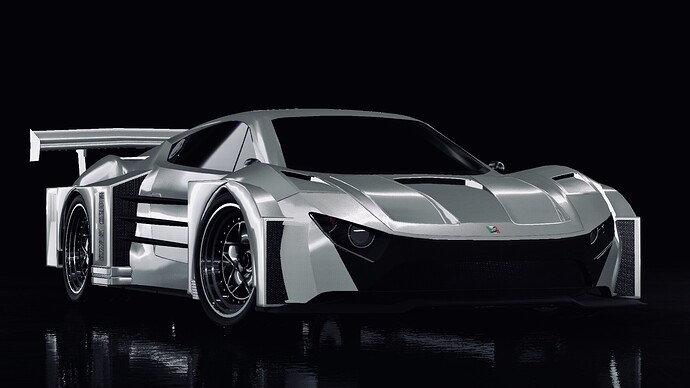 This widebodied Dieci is about as thicc as they come. The engine is the same, but with space for wider tires, grip is improved. 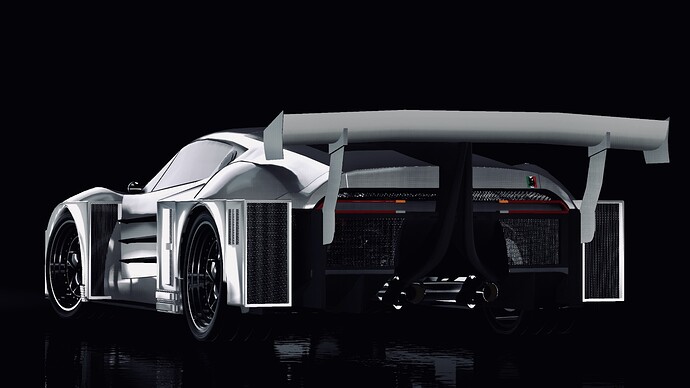 The rear wing is also changed to a large bumper fin-mounted one, providing additional downforce. 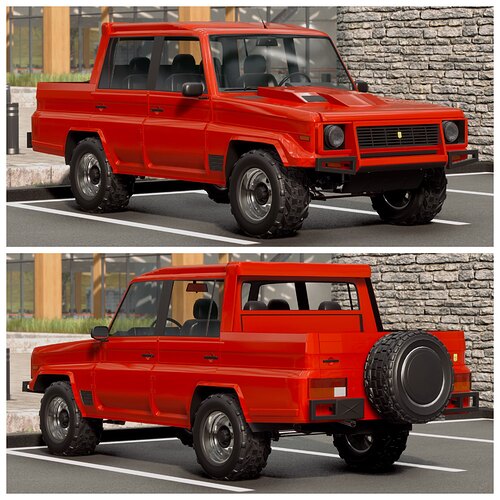 The Di Inferi DC048 is a sports utility vehicle produced by manufacturer Di Inferi between 1985-1992, for a total of 316 units. The name, DC048, means “Di-Inferi Carozzeria 048”. This naming scheme had been used consistently by Di Inferi for previous concepts and prototype models, though the numbering scheme would later be abandoned and used as a more arbitrary number, for example in the Di Inferi DC221.

The DC048 originated from a prototype military vehicle constructed by Di Inferi for use by the Italian army. However, this offer was rejected as development and subsequent purchase costs became very high. This led Di Inferi to, instead of abandoning the project, continue to develop its viability as a road-going vehicle. This eventually led to the focus towards the sports utility market, though it was over time ceded into the luxury market as well.

The DC048 featured a 6-liter naturally aspirated engine, producing 464 horsepower. It was equipped with engageable four-wheel drive, manual differential lock, as well as a low-range gearbox. The 1986 model was weighed in at 1883 kilograms. While the original military prototype was quite bare-bones, the civilian version was fitted with air conditioning, cruise control, as well as other comforts commonly found in road cars at the time. Additionally, it came standard with ABS. 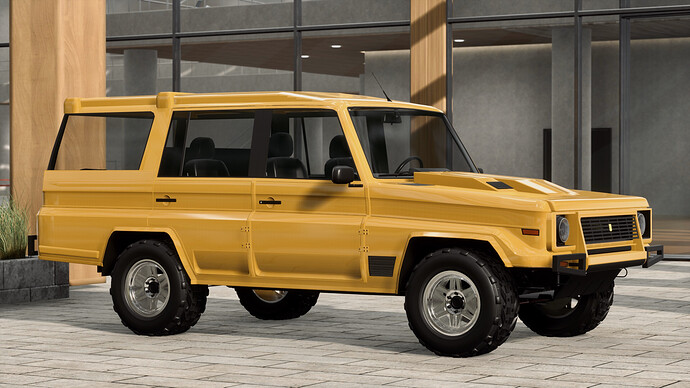 An SUV variant of the DC048 was also available from Di Inferi via request through dealers. Only 6 known examples of the DC048 SUV are known to have been produced. Here is one in Giallo Limone.