The B-SPEC Bob Competition is named after the B-Spec mode in Gran Tursimo, and the outline of the challenge is somewhat based on the GT game play as well.

Short interlude: I have learned from earlier competitions that involvement of the community in the actual ongoing challenge is important, so I have thought up a format that I hope would stimulate exactly this. The purpose is to have regular input and to create a true sense of ownership of the car during the run of the competiton

How the competition works:

The real competition will only start after a car-gathering phase. In this first phase, everyone is invited to send in realistic, well-designed cars within the class described below. From the cars send in a selection will be made, based on design, realism and balance between the submissions. These cars will then be put up for sale. This means the car file will be shared with the buyer(s). In fact, the purpose is that you buy someone else’s car. It’s in the modifications of the car bought that you will make this car your own.

You are not obligated to send in any car to compete in the actual competition. You can send in multiple cars to be considered as being part of the competition as long as they are qualitative.

The second part of the competition determines a budget, and with this budget all users wishing to join the competition, can buy one car. The same car can be sold multiple times, with a limit that no car can be more than one fourth of the field to encourage differentiation. The limit is enforced on a first-come, first-served basis.

Faster cars will be more expensive, slower cars cheaper. However, the remainder of the budget can be spent on upgrades.

Only a single upgrade can be bought before the first race – if you have the budget left for it – so selection can be strategical. The second race, you can use up all of the available budget for that race. The third race will feature some additional budget available for the slower performers at that point.

The price of each car will be determined on the basis of ingame cost, engine PU/ET and trim PU/ET, and relative to the other entries.

Outline of the second part:

Cars entered and approved will be put up for sale with an overview of base stats and a more general evaluation of drivability (in Beam), upgradability, base reliability and fuel consumption.

All users wanting to enter the competition can buy a car. As stated earlier, no car can be more than 1/4th of the field. You cannot buy a car that you have send in yourself - but you can cheer for them. You will receive a clone trim of the vehicle you have bought, which can modify or personalize in terms of appearance (though no lips or wings unless bought), and upgrade and tune according to regulations and budget.

There will be three races. Each race will last 2 hours. This is calculated via an Excel that works on a base lap time. This base lap time will be affected by fuel consumption [fuel consumption at 110km/h - cruise + acceleration] and an average of engine and trim reliability in automation.

You can chose to drive the cars yourself if you have Beam and a wheel (otherwise known as going A-SPEC). This time will be taken into account (replay must be available upon request to avoid cheating). I am also talking with one other user who might be driving as well, next to me (me being B-SPEC Bob here) to either provide a control time where we take the average of us two, or that re-drives my top times as a mini final event, where his order then provides the final results.

Important: All racing must be clean. This means respecting the track limits. No corner cutting past the curbs even if the checkpoints allow.

Upgrades available for purchase will be:

Registering as team interested in joining the competition (buyer):

Sending me a PM with:

Your registration will be confirmed by me in a PM, please wait for this PM before continuing to the next step.

Deadline for tunes and times for Race 2: 20 September

One hour mark Minimal changes in the ranking as the racing settles down into each car trying to keep the tempo set; the #11 Nikita Kitty appearing the be the only car able to follow somewhat the tempo set by the #33 Dragotec. The #69 Znopresk is gaining on the #107 Mitsushita, while the #71 Satsumi is attempting to get into the top five. Most improved position the last half hour is the Bob-driven #101 Tsushima Batta, sneaking in front even the #01 Reduit from Treadkillers. …

I use open beta.

Oh, and steam mods allowed, obviously. There’s only one I don’t have and maybe an emblem here or there.

This refers to any tire type other than chunky offroad or semi-slick if I am not mistaken.

And what about engine and trim PU/ET limits, as well as maximum approximate prices and trim material costs? Will they be added to the technical requirements?

This refers to any tire type other than chunky offroad or semi-slick if I am not mistaken.

Hard or medium compounds, added that, thanks for pointing it out.

And what about engine and trim PU/ET limits, as well as maximum approximate prices and trim material costs? Will they be added to the technical requirements?

No, I ask for common sense. You’re building a cheap city car, something from a cheap econo shitbox to a quirky fashionable yet cheap supermini.

If the design is good and technically the car is a mess, I will assist the producer in making it more realistic. The real work is in my choosing and balancing, and the real competition is in choosing a car and updates and fine tuning.

One aspect to underline perhaps a bit more is that the maker of the car will obviously be attributed throughout the competition. And if a car that he or she created wins, then the maker is a winner just as much as the buyer/tuner.

i’ve had a go at making 2 cars, one is fwd and the other is rwd 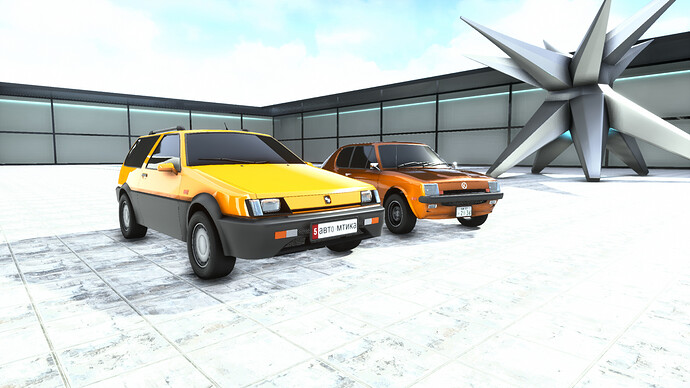 Which would result in three different rankings: Automation only, Beam only, and mixed.

Im keen, and have a few different cars I can send in that might fit the bill…

EDIT: How strict are the Technical regulations if the car doesn’t meet one of them (for example, fuel economy of about 11L/100kms) but meets everything else including low power etc?

3 accepted entries so far. The cars are remarkably different, yet remarkably balanced with the updates foreseen in Automation and Beam.

1 car was considered but simply too powerful standard (I don’t recommend 1.8 litre or larger engines for this…).
1 car simply didn’t meet much of the requirements at all…

1 car is in consideration. It is great, but I didn’t count on full aluminium engines for this. So now I am considering lowering the required engine reliability.

Would having a really low comfort/ basic interior and entertainment setup be counted as minmax? Since a lot of cars from that era did have such setups

No, that’s in line with expectations. There is no comfort limit for a reason. As long as tuning is sensible for a street car, and the other limits are reached.

Minimum engine reliability lowered to 52, on a side note.

EDIT: How strict are the Technical regulations if the car doesn’t meet one of them (for example, fuel economy of about 11L/100kms) but meets everything else including low power etc?

Get (slightly) more power or better efficiency then

width ending in a 5

Could you explain me this rule please?

Car tires for non-racing use have a width that ends on a 5 in mm.

Tires ending in 0 are for motorcycles, racing, etc…

Car tires for non-racing use have a width that ends on a 5 in mm.

Tires ending in 0 are for motorcycles, racing, etc…

7 provisionally accepted. 5 of which are quite certain.

Deadline is still 15 days away and I consider the absolute max 20 cars to balance out in terms of costs and updates, so there might be some difficult decisions.

Even if modelled after AMC’s approach to small hatches?

If I get more power, then it is likely to be too fast.

I’ll give it a go and see. I have a couple of others too anyway