The answer to both is yes, technically. The tire compounds (off road, medium, semi slick, etc) have a friction coefficient inside Beam.NG that is compared to the terrain. As for the suspension, the driving model in Beam.NG is secondary to the physics engine. It isn’t bad, but it isn’t a sim driving experience. The lack of nuance makes hydro-pneumatic, air, and active suspensions not really that different. I have experienced better cornering in some situations with better suspension, but the difference is subtle.

*All this is based on my subjective experience exporting many, many, maaaany vehicles. Somebody may have in engine numbers to quantify it. May be some info (in Beam.NG) in the debug panel. If you can read it.

Off-road tires do feel different on beamng, same with different suspension geometry and set up, it is more noticeable while playing with wheel.
Regarding suspension, I personally do not feel much (if any) difference in beamng going from active to air to hydropneumatic, same with going with active dampers/sway bars. I looked into the beamng mod documentation, and it seems those types of active suspensions are not coded into the game.

Automation’s off-road tires are, to put it politely, still unable to match Beam’s offroad tires. They’re too slippery on surfaces like dirt, gravel and rocks sharper than 45 degrees. I’d recommend doing some JBeam tuning to make them more viable.

Remove the off-road part and what you said is still 100% correct.

Hijacking my own thread to ask this.

My car has correctly set up suspension in Automation but despite this the rear suspension bounces way too much and basically makes the rear jump into the air over bumps at speed. I watched it in slow-motion and it’s like the rear can’t keep up over bumps and the front is way faster.

I suggest you soften the rear dampers… or put more weight on the back if possible. Could you post the car, a video, graphs, etc…? 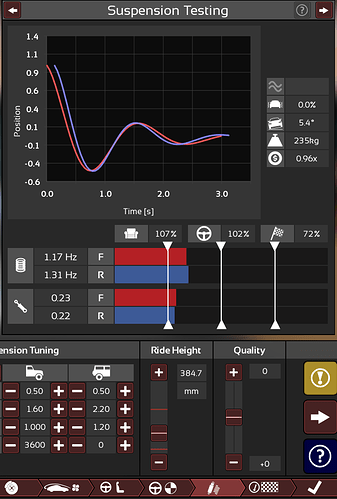 Something like this is what my suspension tend to look like, I actually have no clue what the bump graph is SUPPOSED to look like but my tunes usually end up with good stats. Ignore the camber.

Stiffen dampers to slow down spring speed, stiffen springs to make springs not travel as far. Springs and dampers should be hard for good road handling, but soft for comfort.

Here’s another tip. Min-maxing stats in Automation doesn’t necessarily lead to a good driving car in BeamNG. Also, in the bottom right hand corner of the screenshot you posted there is a blue icon with a question mark. Hover over that, and you’ll get a tooltip on how best to setup your suspension for different goals (comfort, drivability, sportiness).

That is an odd suspension setup (or very different that what I usually do…) I suggest you first get rid of the front sway bar, then make the springs and dampers more stiff, until the red and blue bars are in the line of drivability. Then stiffen the front or rear sway bars depending on what you want until you’re in the 5º to 7.9º roll degree for regular cars, or between 5 to 3 for more sporty feel (or below for an extreme race car). Then take it for a drive and tweak the suspension from there.

Also, what kind of car you’re trying to make? If you’re going for an off roader on beamng for example, get rid of the sway bars entirely and increase ride height. And as slim_jim pointed out, hover over the blue icon to get a bit of info on different setups.

That was a RWD prototype which is why the front swaybars are extreme because the car had awful weight distribution. The current car is FWD and has a much better suspension. Also it’s a small and light coupe from the 1960’s so it’s not going to have super stiff or advanced suspension.

The bars are relative representations btw. 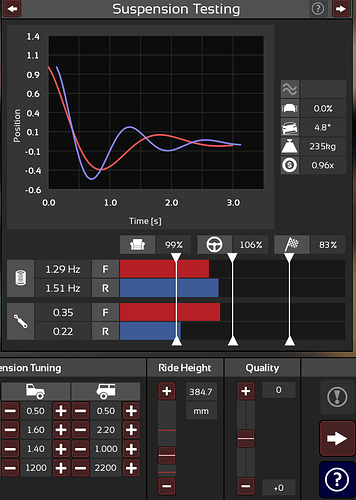 This is the car as of now. I’m still trying to make it better to drive in BeamNG because right now it’s terrible and I’m thinking that I should probably make the rear dampers stiffer.