Please note: some community challenge cars are a part of a different timeline

Welcome all to a history lesson of a fake car company based in Finland. I’m gonna teach you how Birch Motors became what it is today… No-one knows yet though what it is, I’ve only thought about the company’s early history but AHEM.

The story of human history. All of it.

Birch’s roots are in Valmet. For some time we had been building heavy delivery vehicles as war reparations for Soviet Union. The Soviets, however, trusted in their own vehicle industry and didn’t want the cars that we were building. So, instead of retooling the factory, it was sold as-is to a private owner on a relatively cheap price.

Armed with our knowledge of “How to make a damn good utility vehicle 101”, we started production of our first batch of pickups and trucks. Our cars got instantly known for their ruggedness, torque-y engines and good ability to start under -20°C.

And these… are the cars that I’m talking about:

(Yes I know that I need to design a badge and such, I’ve got no ideas, help mom)

It’s interesting to speculate what a Finnish car company could be like. We know we can make trucks and build other companies’ cars well but never really had proper passenger vehicle industry using our own designs. I don’t always think my companies to be based in Finland because it’s difficult to imagine. Military trucks would probably be the most believable origin story. My latest lite campaign game has Tampereen Moottoritehdas which started out making engines (I’m thinking maybe for boats or forestry equipment at first) and then started designing their own cars.

Here it is, the first car model Birch ever produced:
Prepare for disappointment 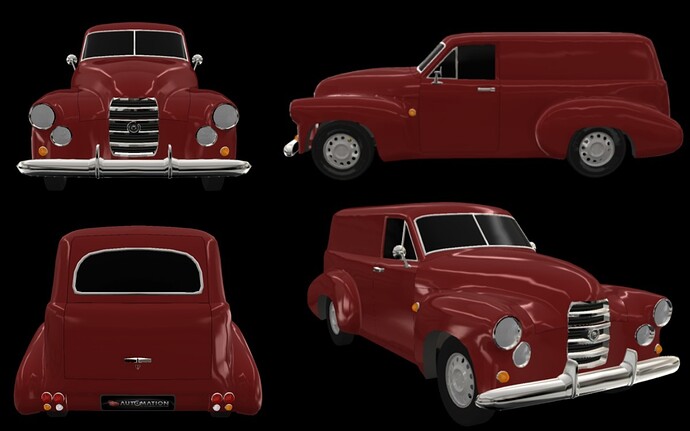 Motti is a van aimed at people who have something heavy to carry, such as firewood, tomatoes or illegal immigrants. It was adopted by small and big businesses alike and it was common to see something like “Kesselin Urakointi Ky” being painted on one of these. Some businesses still actively use these today because of their historical value. 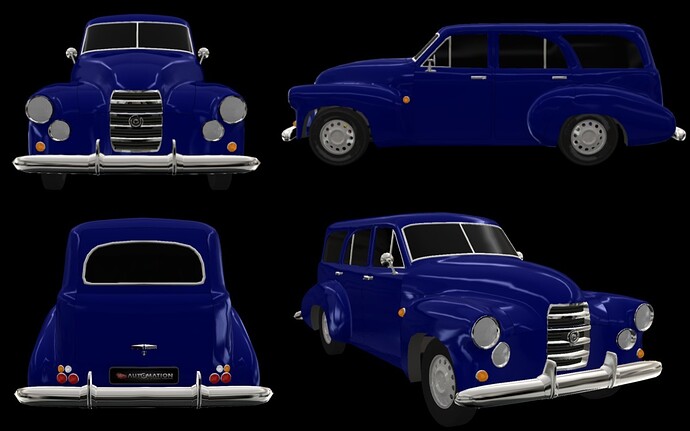 Our lead engineer saw a way to get into the family car market. One day he proceeded to saw a vaguely door-shaped hole behind the front doors and heureka - PE-AU 100 was born. Its 6 seats provided ample room to put your screaming kids in and also some cargo space for that new armchair. The whole interior also received a small upgrade. It sports the same engine as PA-AU 100, so this isn’t a speed demon.

Ps. Just noticed that translating the company name into Finnish lets it become Koivu Motti, or koivumotti. The Finnish thing ever.

Really like the styling here, seems very appropriate for its era and is well laid out. Specs are also great for a car of this era.

Its not a car if it cant start in negative 40 degrees. also Deus Vult

I hope a forest green paint job is available. Seems like just the kind of car post-war Finland needed.

Because God wills it?

Is it supposed to retake the holy lands?

Our only car model, Motti, was so good that it became known outside of Finland in less than 2 years. This allowed Birch to grow. It gained more market share especially in Europe and the first imports into the US were made. We also experimented with new technologies, such as OHC and space frames. First attempts in motorsports were made with very mild success.

Because of this, we started naming cars in English in addition to Finnish. Our model family was multiplied by 5 (1x5=5) and our company value skyrocketed. A fine start for such a small company. 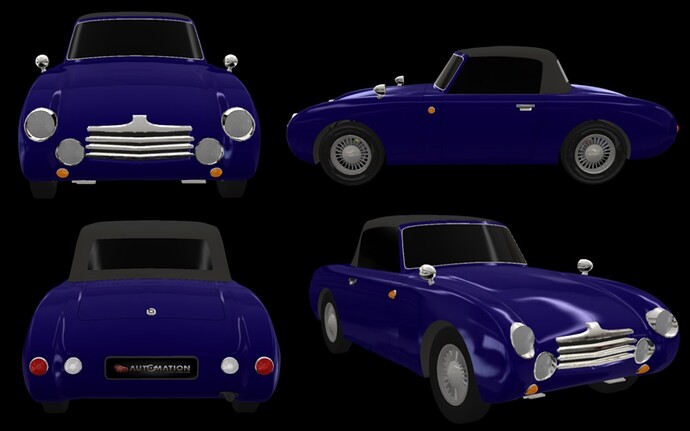 The first car in our lineup to use DAOHC and space frame, Kiito was aimed for everyone’s favorite hairdressers. It was light, agile and easy to drive. It wasn’t luxurious in any way, but it gave you the opportunity to feel the wind in your hair - if you had any - and just enjoy driving. It was met with success in central Europe and Great Britain. It was, of course, also sold in the nordic countries, but the softtop wasn’t the best option there and didn’t sell too well. 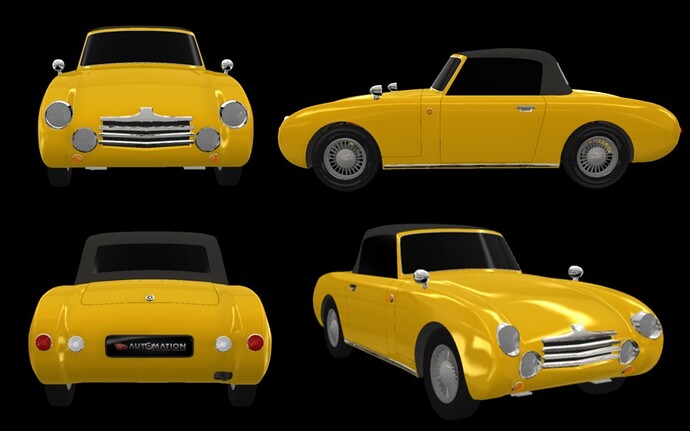 The sportier, more luxurious trim of Kiito was equipped with a more advanced and powerful engine alongside of a radio and overall sportier interior. It didn’t do that good in the sport car market, but some weirdos adopted it as their main city vehicle. With zero practicality, it was quite a dumb move from them… but we got their money already, so we don’t care.

Reminds me of the story of the reliant Robin.

Sorry for the long pause… This will happen a lot. This thread isn’t dead yet!

Now on to the next car, which is Motörhead fueled!

We teamed up with some englishmen to make our next car. The brits supplied the body, then they didn’t do anything beyond that. We did everything else and came up with Hellraiser, the car that started our performance division - the Bitradi (BIrch TRAck DIvision). 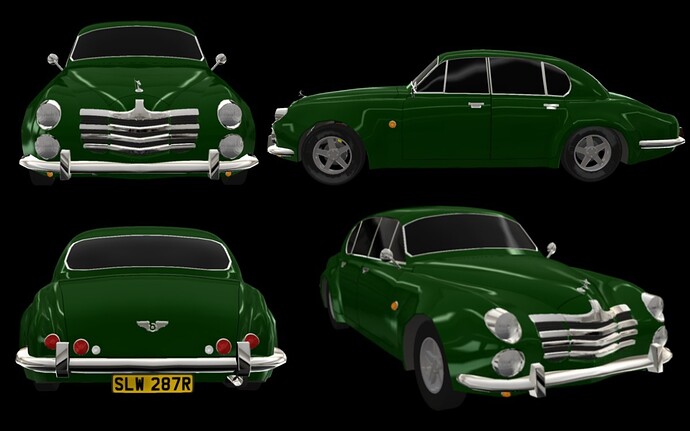 This trim of Hellraiser was mostly aimed for the middle class as a prestigious choice of a family car. Armed with an I6 and 3-speed manual transmission, it was aimed to be sold mostly in Europe. However it’s high cost and lack of premium equipment hindered it’s success and wasn’t exactly very popular. It didn’t do bad, but not that good either. 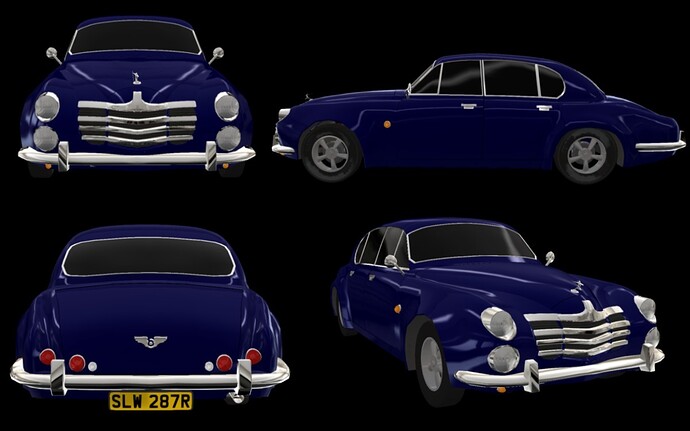 This trim was intended for the actual premium markets, it sports high quality equipment and a more powerful engine. Mostly imported to the US, it gained a good foothold and sold pretty well, especially in the utility sector thanks to it’s torque-y engine. Yes, it was used for towing. Mad? 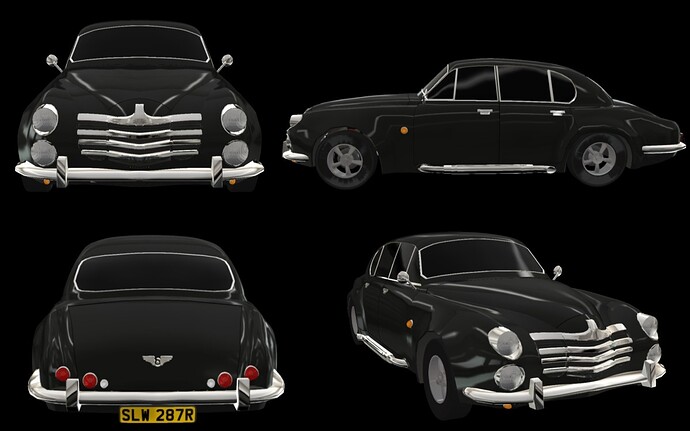 This is where it’s at. A great oval racer, the Special has a tuned 5,5L V8, wider tires and stiffer suspension. Most of it’s interior has been stripped off and the whole car is a bit wider. Side exit exhausts have been fitted for enhanced engine breathing and for that V8 ROAR! It sold surprisingly well in Europe as a track car, although it was first never intended to be sold in Europe. The US sales were - in turn - surprisingly low.