The 1900s: At first the Company was just Called “Briggson Parts”. It was founded in 1901 in Gasmea by John Dean Briggson in his Garage when he started Building Parts for Local Manufacturers, mostly Transmission/Gear Parts and Small Electrical equippment.
In 1903 Briggson Teamed up with James Peterson Sparrow and expanded while starting to Build Internal Combustion Engines for Commercial use. Because of that the Company was Renamed to “BMC” or “Briggson Motor Company” in 1904, they were expanding into new Markets quite quickly.

The 1910s: In 1911 they already Build whole Drivetrains, worked with a Couple of Car Manufacturers and the Gasmean Military, this also helped them to get through the Great Depression.
But let’s stay in the 1910s for now; in 1916 they had to start Building Tank and Plane Engines and other Parts for the Military because of WW1, they continued to Supply parts for Army witch earned their Company the trust of the Gasmean Goverment.

The 1920s and 30s: the 1920s and 20s went Smooth up until the Great Depression hit. the Company almost went Bust, they had to Lay off a lot of Workers and had to get Support from bigger Companys and the Goverment, they started the 1920s wit 31 Workers, in 1928 that number was up to 43, in 1932 they were down again to 31. 1939 with only 9 Workers remaining, the Gasmean Goverment came in, they started to support them.

1940s: the 2. World War Started and it was only a matter of time when Gasmea had to get involved, the Small Offroad Vehicles the Military used at that time were insufficient for the task at Hand and they needed to modernize. BMC had to Build a Tough and Powerful Offroader that could run on anything you could imagine to run as Fuel, and that was the time BMC started to Bulld Cars…

So, this is just the Prestory of BMC and how it became a Car Manufacturer, i will update this Thread today and post Pictures and Storys of BMC and theit coming Cars.

If this new thread of yours is a car company thread, then it deserves to be in the car design sharing sub-forum. Anyway, the history of the BMC-Briggson Motor Company will most likely really begin after the war, since we can no longer select any year before 1946 for anything as of the latest release.

BMC Marauder the Start of a great Automotive Manufacturer:
I am going to spare you from the horrible Desasters that the First couple of Prototypes where and the decent Models that came out before the Production of the actual Vehicle and get right into the Prodiction Model: 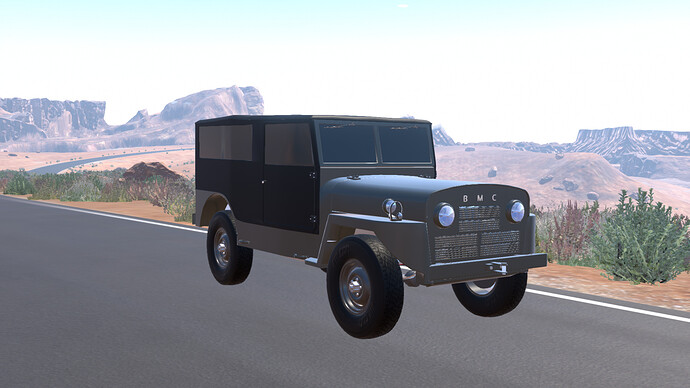 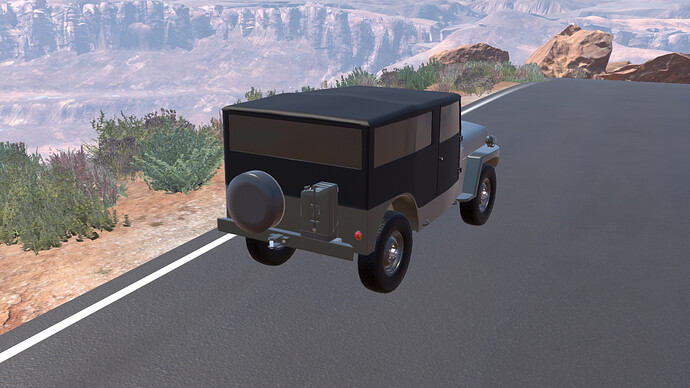 Photo181920×1080 718 KB
This is the BMC Marauder! It was made with simpicity in Mind, Engine was based off the pre War Marauder 159 CUI 4 Cylinder Generator Motor that BMC made since 1936 (thats also where the Name Marauder came from), a Basic OHV Cast Iron design modified to Work in a Car with Fuel rated as Horse Piss, 6:1 Compression, Liquid Cooled with one Single Barrel Carb. Manual Timing Advance and Retardation(MTAR) on the Dashboard so that you can add and Remove a couple of degrees depending on what you put in the Tank. It wasn’t uncommon to run these things on Ether, Kerosine and all kinds of stuff. Power was rated at 64 HP and 122 lb-ft on 87 Octane(75mph Topspeed) Ignition fully maxed out, and 45 HP and 89 lb-ft on 75 Octane AKI(65mph Topspeed). 4x4 Manual Lockers, 3 Speed Manual, Weight just under 2000lb and a Load Rating of over 1000lbs. These things were bullet Proof and got used up into the 1970s by the Military because you just couldn’t kill them.
Dissy 19 March 2020 17:34 #5

Continuing in the year 1947:
The first BMC made for the Public, the BMC Romara: 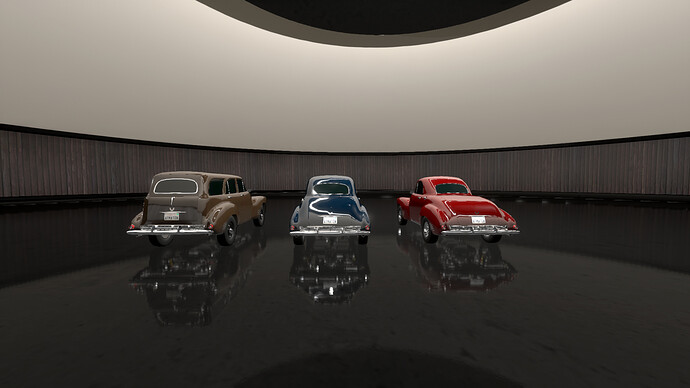 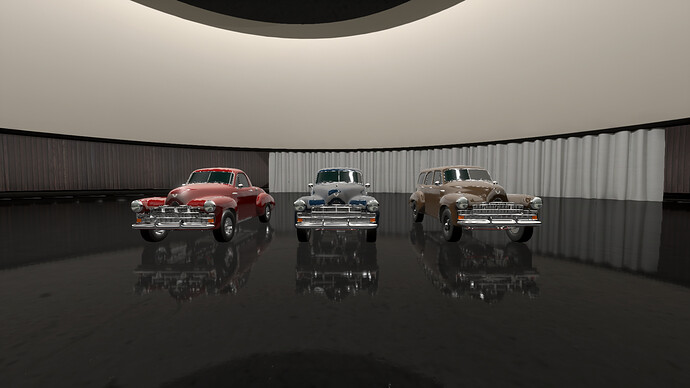 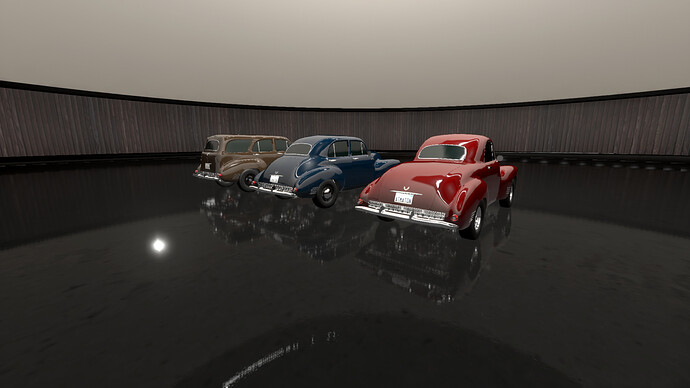 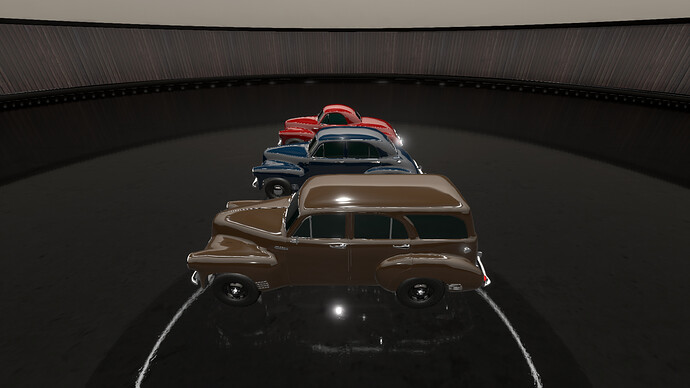 All Models were avalable in different trim Levels, “Family” for instance, for the Wagon and Sedan, wich got you a couple of changes in the Interieur.

While the Sedan and Wagon were avalable as 4x4’s or with RWD and with either 130hp or 150hp, the Coupe was only avalable as RWD and with 150hp. These Engines can still be bought as Short Blocks and Crate Engines today, either with Cast Iron or Aluminium Blocks and/or Heads.

It was a decent start into the Cars Buisness for BMC, allthough its main downfall was that no one really wanted a Luxurious Vehicle from a “Generator and Tractor Engine maker”.

On the Plus side these cars were loved by Hot-Rodder’s, Racers and even Rock Crawlers because of it’s lightweight Body, durable Engine and Cheap Resale Value because BMC wasn’t established in the Car Buisness. Here you can see a late 60’s Gasser, a Modernized “Fat-Fender Rod”, a Romara that was Raced on dirt Tracks in the Late 40s to early 50s and a Modified 4x4 Wagon: 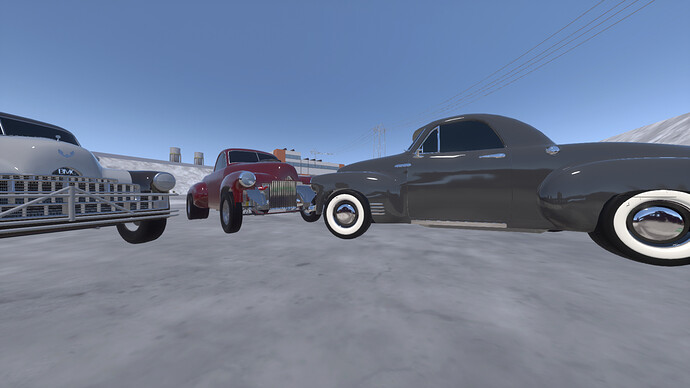 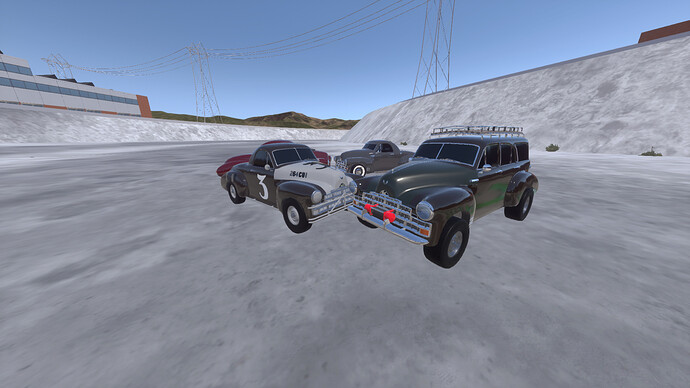 Photo291920×1080 482 KB
Although the Car wasn’t a total disaster, it wasn’t a real success either, BMC had to sell the Cars quite cheap and didn’t make much on selling them, they stopped production of this model in early 1950. Ths was also the last “Car” sold by BMC as a BMC. Today these Cars are seen as colectibles and acheve extremely High Prices.
1 Like
Dissy 21 March 2020 20:55 #6 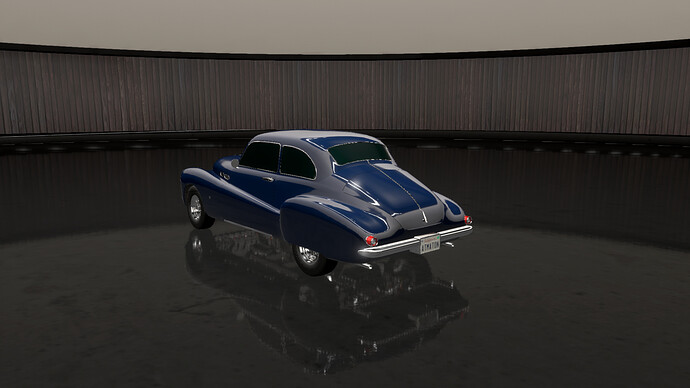 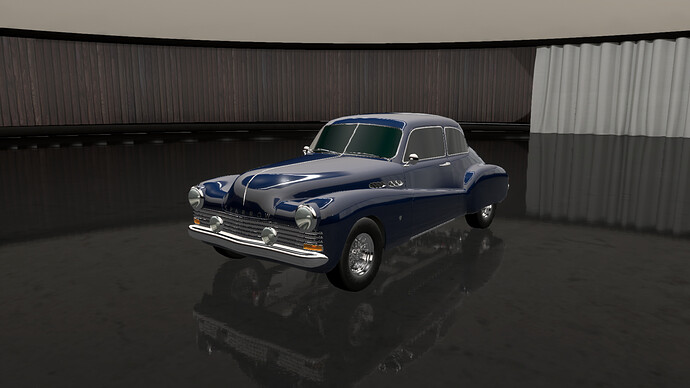 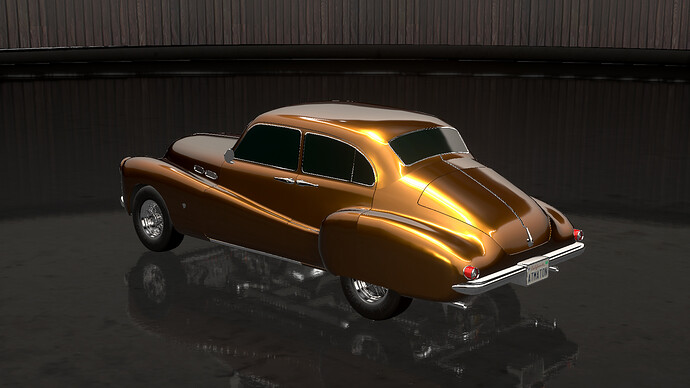 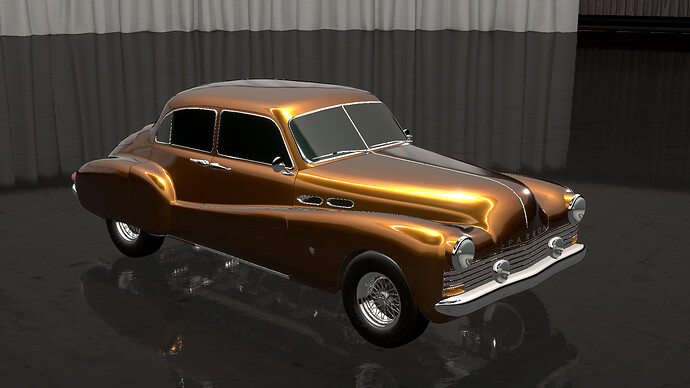 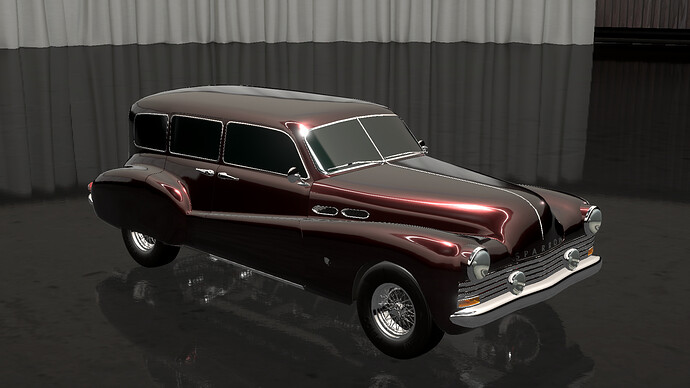 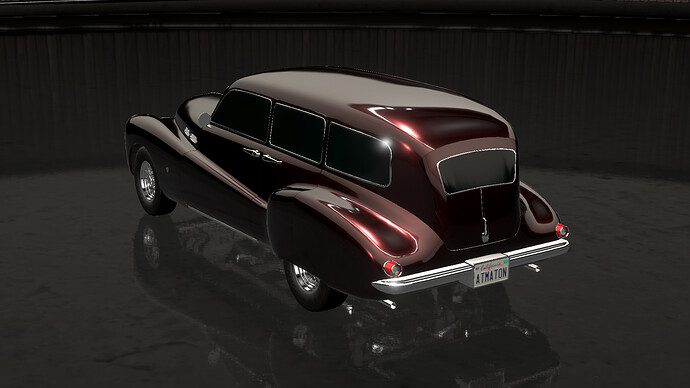 Photo391920×1080 356 KB
Wagon/Hearse
Yes, you read it right, this isn’t a BMC, BMC decided to sell their cars under a new Company Name, the Name Sparrow derived from James Peterson Sparrow, the Co-Founder of BMC.

The Sparrow Hawk used the same 264cui V8 that was used in the Romara, altough modified:

Using Lighter Internals, Higher Compression, Differnet Carbs, a more Silent Exhaust and a lot of other Small Changes the fuel Economy was improved Significantly, while making the Engine run Smoother, Poweroutput was also slightly improved, instead of 148hp/229lb-ft the New Engine made 152/230lb-ft, keeping the Torque over 225 from 1700rpm up to 3500, the Old Engine did the same from 2000-3200rpm.

Although the Car was extremely Expensive it was still significantly underpriced comparing it to it’s competitors, while still having on par quality and features, wich made it a big hit. Production was stopped in late 1953. 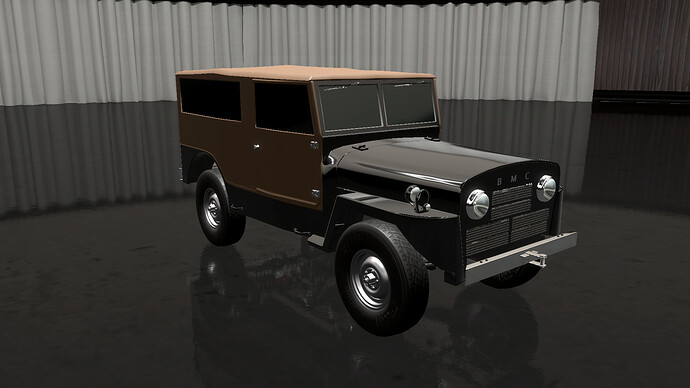 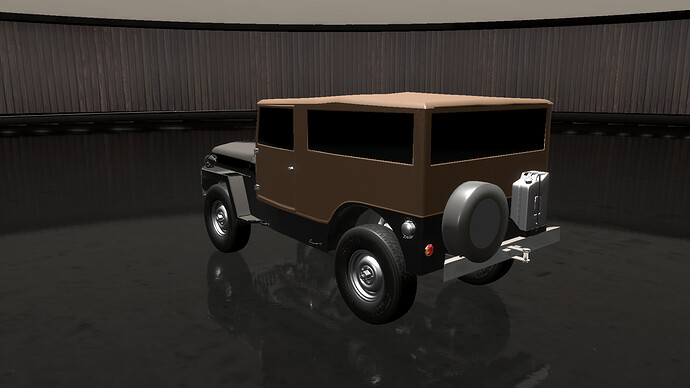 -The Enine was Destroked to 147 CUI to make it more Revhappy, it was completely revised to up Fuel Economy, the ignition Timing was now Fixed and the Engine was now Set to run on 87 Octane permanently, MTAR(Manual Timing Advance and Retardation) was now an Option, altough it was still easy to get it to run on 75 Octane or any other type of Fuel you wanted without it. Output was 60hp at 3500rpm.
-The Exterieur got a couple of Chrome accents and got Shiny/Glossy Paint, there are a couple of different Paint and Roof Colors avalable.
-The Interieur got decent Seats instead of using what was basically Lawn Chairs while being avalable in 3 Different Color choices.

The 1950s went smoothly, the Sparrow Hawk was revised and got a couple of different changes Body wise and was continued up until 1958, whith Sales slowly falling of.
1959 Rolled in and BMC was Prepared for it:
The ABC Routemister 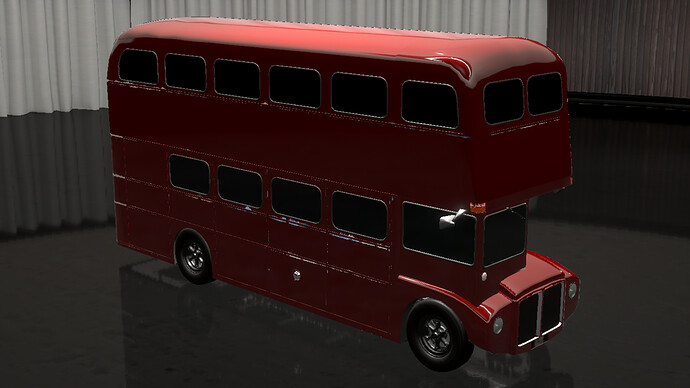 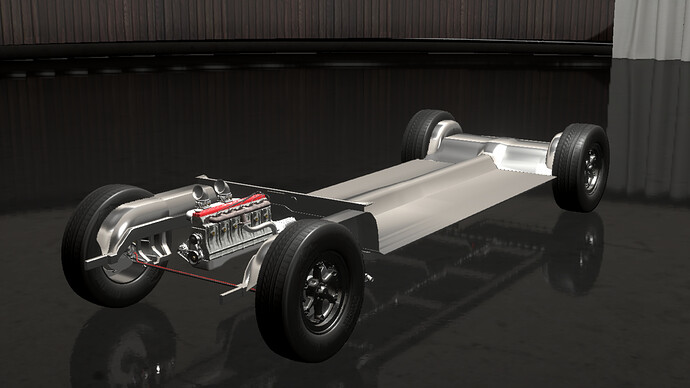 Photo501920×1080 330 KB
BMC was Contracted to build new Engines for the ABC Truck and Bus Company, while building the whole Rolling chassis in their Factories.

The Engine chosen for this job was a Newly engineered n/a 497 CUI Inline 6 producing 150hp@2000rpm and a whooping 400lb-ft@1900rpm while still making 360lb-ft @900rpm it was coupled to a 4 Speed Transmission and a 2 Speed Manual Locker Rear end, making it 8 Gears. This Contract gave BMC a big Financial Boost and encouraged the Company to expand.
A bigger Marauder 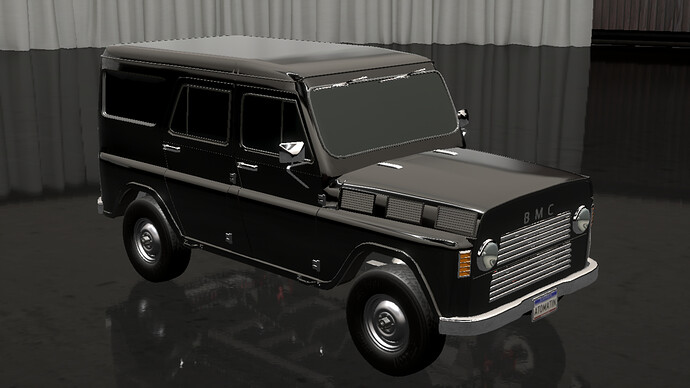 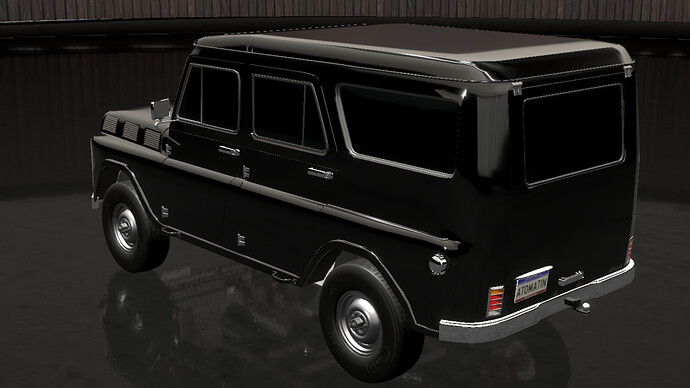 Photo471920×1080 329 KB
The BMC Marauder was selling well, but because of the ABC contract BMC wanted to, as said above, expand(literally).

So in 1959 a bigger Version of the Marauder was introduced;
a new 290cui V8 was engineered and Built for it, but it turned out that that much Power in an Offroader of this type made it a Deathtrap, so the new Marauder kept with the 4 Cylinder that was used since WW2, while the Block stayed the same, the Internals were Modified, the Engine got a Second Carb, and the Stroke was increased wich brought the Engines displacement to 156cui.
The most siginficant difference to the old 147 or 159cui Engines was the Valvetrain, instead of using an OHV Design BMC chose to use a Direct acting SOHC design and with these changes the RPM Limit could be increased by nearly 1000rpm, while increasing Torque, Horsepower and Fuel efficiency, the new Engine made 85Hp @4500rpm wich was enough to get the new Marauder over 80mph.
MTAR was still an Option and the smaller Marauder could still be bought as before. 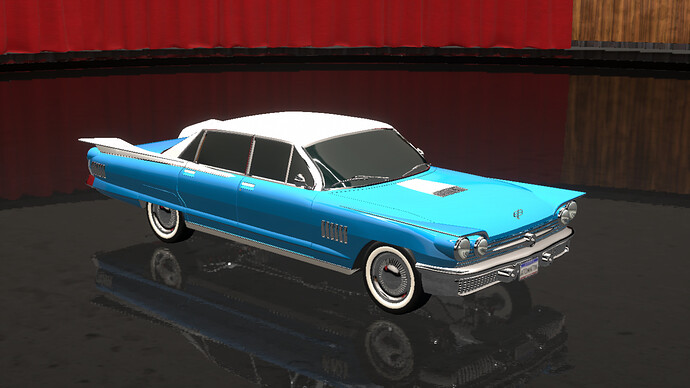 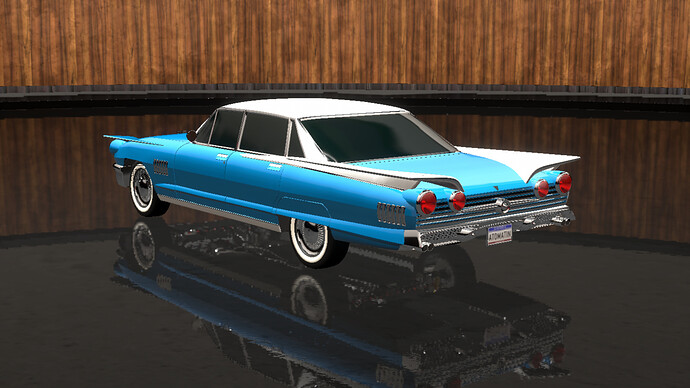 Photo431920×1080 523 KB
This is the new Sparrow, a completely new Design, spotting either a newly designed 414cui V8 with 250hp and over 400lb-ft or the previously mentioned 290cui V8, Power was sent through a buttery Smooth 2 Speed Automatic Transmission, wich gained another Gear in 1960, a 4 Speed Manual was also an Option, but most People didn’t want to spend time shifting Gears in a Luxury Vehicle like this one.

Double Wishbone Front and Rear Suspension and a fully stocked Bar in the back for Passengers were standard equippment.

This is about the pont where i have to fuck over the timeline and maybe a little bit of my own Lore, i forgot to Post a Car that came before the '59 model Year and i don’t have a Car for every year this companly existed, so here it goes; 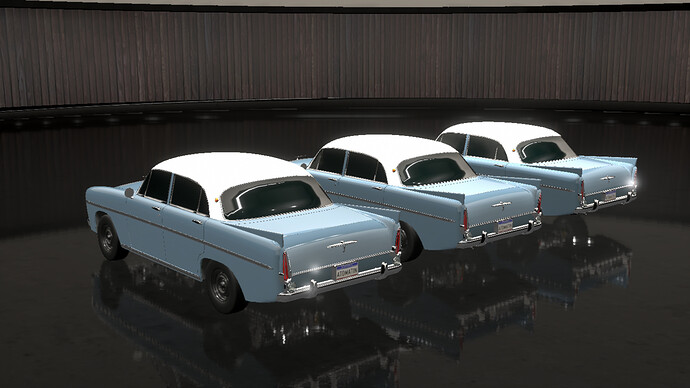 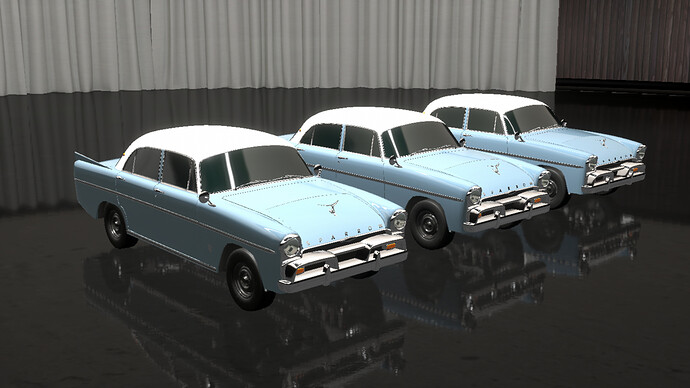 Avalable with either the well known 264 cui V8, now with a tripple Two Barrel Carburetor system the Engine could produce 200hp@4100rpm and 270lb/ft@2700rpm.
This was the most Powerful version of this Engine used in a Production car while also being the last Model this Engine was being used in.

While the V8 sold resonably well, the Diesel didn’t sell at all, there were only about 350 ever built, not including 3 Prototypes.

There were also a couple of test Mules fitted with Turbine Engines to see if Engines of that type were good alternative to Piston Engines, these tests failed though because of the Horrible Throttle Response and the insane amount of Fuel the Engines would Guzzle.