Thank you for hosting! You definitely had me on the edge of my seat, and it was a pleasure to compete in Group 4 3000. Congratulations on your class victory and 7th overall, AirJordan, as well as to the overall victors!

I never got to post my car before the race, so I think now is a good time to do that… 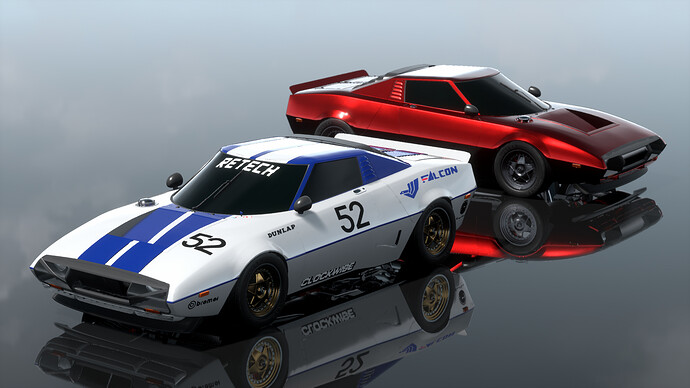 This Zacspeed ONE may not look as you remember. When we heard the Nürburgring’s call for race cars, it was clear we needed our best outfits. The car was no exception. Out are the curves and in come the edges. Its large eyes are gone in favor of a firm face. It even pinched some bits from its prototype brethren - the 875 and 408. Take off the suit, and aside from the familiar, all-aluminum flat-six sitting forward of the rear axle, many of the components present are borrowed and adapted from the usual ONE.

These alone would not help. Even within its class, some cars brought an additional 50 horsepower, leading to times 20 seconds faster than ours. Through the combined efforts of Dan Miles, Nelson Barbosa, and Carl Schubert, we clawed our way from fifth in class to second in class, leaving the second smallest gap between first and second in class: 7:16. Starting 21st overall, we progressed 12 positions to 9th overall - a top 10 finish dominated by cars packing 100 more horsepower.

Hopefully we can clean it up in time for the bonus race. 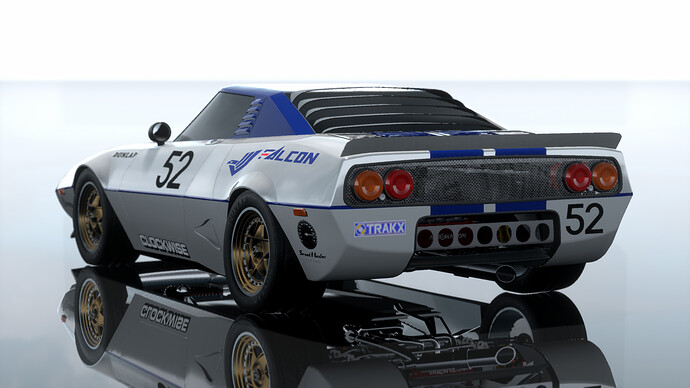 And for the car, a solid second position at his class and 23 overall is pretty good for a first attemp. Maybe a more conservative aproach to fuel consumption and tire wear would have benefitted us, but that´s for the next challenge. And well, better luck would be nice two, two serious collisions with other cars that slowed us down, although being able to finish after that says a lot about the building quality of the car. 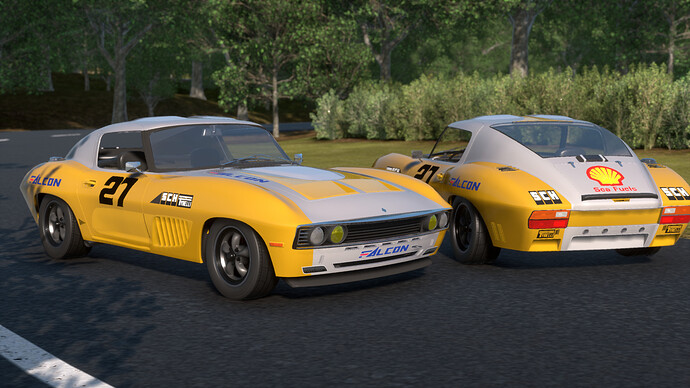 Remembering the magical 2 minutes and 8 seconds at the end of lap 48 where two competing pit crews changed tires in perfect sync:

A nail-biting, nerve-wracking, edge-of-the-seat experience. Thanks @HowlerAutomotive and @Der_Bayer for making this possible!

don’t forget how Clarkson used WD-40 and his hammer to fix my electricals.

The Nagase Horizon a fairly shallow increase in time gap throughout the entire race, which was hampered sharply in many locations due to punctures early in the lap and critical malfunctions near the ends of laps (meaning at least 70% of the lap had to be repeated) cost the Horizon dearly, in spite of decent numbers in engine and trim reliability (48.5 and 60.2 respectively). In spite of these issues, Ace Racing almost managed to climb out of the lower 50%!

Brake wear was unexpectedly high, which leads me to wonder if brake airflow (aerodynamics) was taken into account.

It was also interesting to see that there did not seem to be much correlation between the difficulty of the car and the number of mistakes made by the drivers.

Speaking of early lap punctures, it’s somewhat unreasonable a car would traverse an entire lap with a puncture. If the puncture is early enough in a lap, I would recommend they pull off onto the service roads and return to the pits, as that would be much faster than taking 70%+ of a lap at half speed (much safer, too).

All in all, this was a wonderful event, and the perils of racing is that things can go wrong even when you’ve done almost everything you can to prevent that! I’m very interested to see how things progress with the bonus event.

That was an absolutely wild event to watch!

Team AZS-Scagliati Deutschland had what can only be described as a dramatic race; qualifying 18th overall, the #61 Falco proved early on that it was a very quick car, clawing its way into the top ten, and running as high as 8th overall.

Everything was looking good until the 9th hour, when a clutch failure just past Hohe Acht sidelined the car for over an hour of repairs. Rejoining in 54th place, the driver team of Baghetti, Sabbatini and Pirozzi fought their way back through the field, helped along by the highly variable weather in the last eight hours of the race; at times, the #61 Falco was among the fastest of any of the cars on track, helping the team recover lost ground. A thrilling battle in the final laps ensued with the #77 Quezon Laguna for position, with the Falco overtaking the Laguna in the final few corners to finish in P17 overall, a very respectable result considering the misfortune the team faced!

Well done to @HowlerAutomotive for their well-deserved victory, and thank you to @Der_Bayer for organising this challenge! 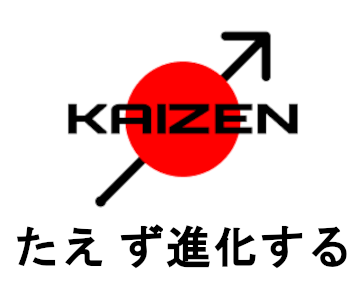 Kaizen Corporation and their partners at Arion Automotive and Racing Company (@Aruna) are pleased to report a good 5th place overall finish at the 1970 BRC 24 Hours of Nurburgring. Kaizen wanted to trial their new fuel-efficiency oriented SOHC 3v valvetrain for their longstanding luxury car Impetu V8 engine in a durability test, while Arion wanted a new mid-engine for their supercar that could rise to the challenge. Both requests were fulfilled admirably. Qualifying in a comfortable 12th, the Arion P48 RLST eb Kaizen showed the power of international collaboration, thundering around the track as one of the fastest cars in the whole race. It proved not only fast but extraordinary dependable, given that besides two punctures, there was no mechanical error at all. This is an excellent testimony to the “Spirit of Progress” of the engineers from both Kaizen and Arion, along with the entire #66 Mikon race team.

(Particularly exciting was the intense battle with @S31’s MAHG Prisma, in which places were swapped several times in nail-biting intervals, with mistake this and puncture that, along with the near equal pace adding to the drama.) 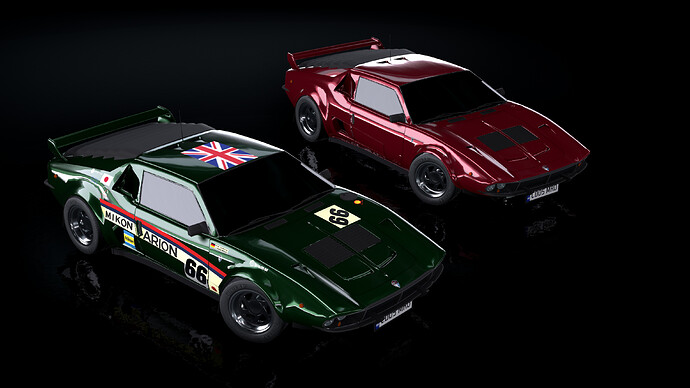 "The soul of progress is universal"

(Thank you to everyone involved for this excellent race. Hopefully I’ll see you later.)

Oh for 6h I’m all up for Australian Butthurt, eventho my efficeint engine will struggle at this powerhungry track. 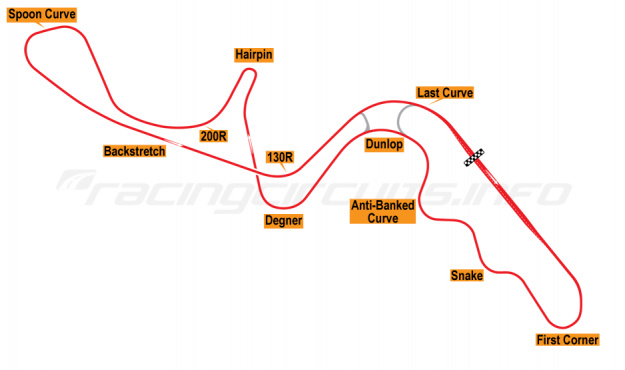 Thank you for your track recommendations! I have chosen something a bit different (mostly cause of required track length to run 80+ cars without causing complete mayhem). I couldn’t decide between two gems of their time, so we’re racing both of them.
The tow truck feature introduced on the Nordschleife will not be available for those two races.

I built the tracks yesterday and will start to prepare the practice results now. To bridge the time, here’s an excellent video about the opening race of the Circuit de Charade from 1958 (in French, but it is worth watching anyway) and a video with scenes from the old Masaryk Ring. 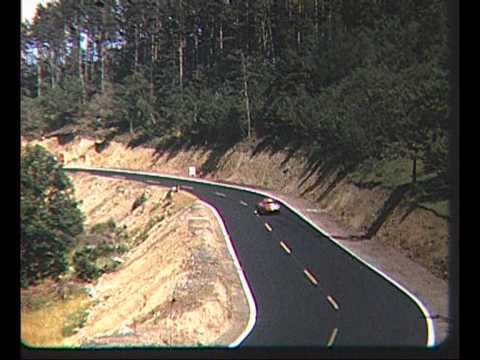 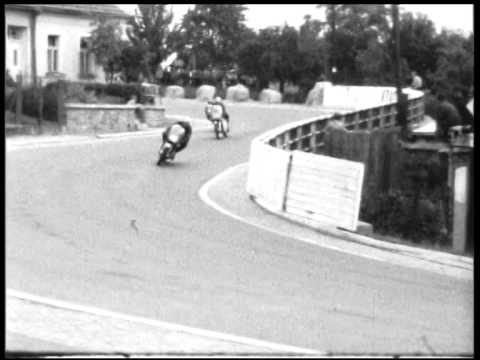 What a legend. You couldnt decide on one bonus(!) race so you are gonna do 2. I had to read it twice.

Samuel Godhap and Martin Whent would like to thank the organisers, sponsors and participants of this years 24hr endurance race at the Nürburgring.

Despite never being in contention for outright honours, we walk away with our heads held high. Our finishing position of 2nd in group and 22nd overall from a qualifying postion of 56th, even being 15 laps behind the race winner, was very satisfying, knowing that a Seax is a car that can be driven at its limit for hours. Congratulations to all of the winning teams, and a well deserved salute to all of the others.

My favourite bit (yeah, I know only one of us was actually racing at the time) was when I was ahead of The Green Mamba. Don’t believe it? Neither did I.

I made some very poor mock-ups of a handful of competitors, and they all smashed my time. So, I set the unrealistic goal of finishing ahead of 2 cars; The Coromell (EnduRing) and the Revello (Vri404). Apparently, dreams do come true. PRAISE THE RNG!!

Thanks @Der_Bayer for hosting this! And I love to see you’ll do two other races for these cars!

Congratulations to all the winners! 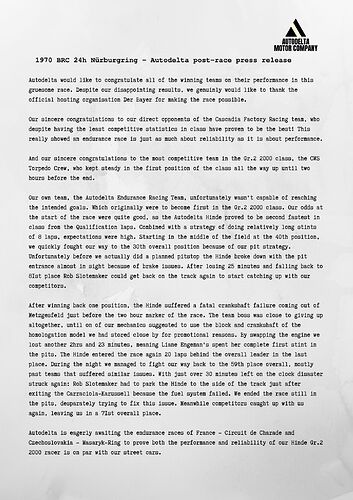 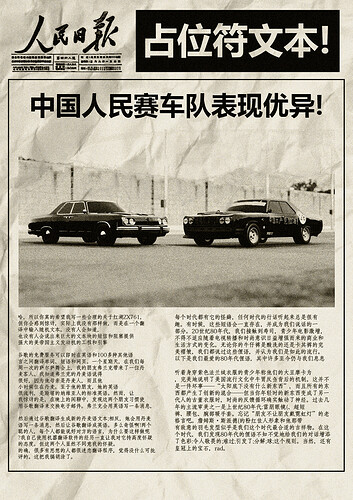 An article regarding the race and China’s State Racing Team was distributed across the country through the People’s Daily newspaper - the nation’s state press. It commended racers Guoqiang Li, Qiangguo Fang, and Wenge Fu for their valiant service representing the nation through the State-run Honghu vehicles, and attacked the engineering of the American-built Innis powertrain. The paper stated that it was the imperialist United States’ part quality that tampered with the in-house engineering the team claimed to do, and thus it was America’s fault that they could not secure a victory in the Group 2 Open category. 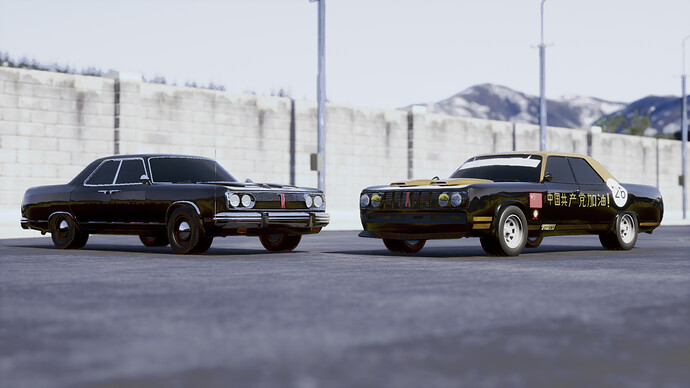 I completely forgot to mention the lore of the racing team. China State Racing Team was formed during the Cold War as a propaganda effort to show the might of the People’s Republic. It used old copycat Innis engines and parts from previous Honghu designs, mainly, a 4.0 litre inline-6 truck engine to push the large luxury sedan forwards. The racing version of it was far from the quality of its German and American competitors as a result, and as such, the transmission failures which occurred during the race were expected (not for me though, I built the vehicle specifically for reliability not speed and it got me in the end

Getting that aside, this was a really fun race to watch! I woke up in the morning to see the Honghu in dead last, only for it to climb some significant spots by the end of the race and eventually not come last in the grouping! The reliability strat worked somewhat well which I am happy about!

Many thanks to Der Bayer for hosting the race, and I hope many other events like this come in the future! Looking forward to the bonus races too!

The practice results have been done and it seems like the two track need different strategy approaches. Be especially aware that the Clermont-Ferrand track likes to eat tires. Please submit your strategy updates according to the example below. 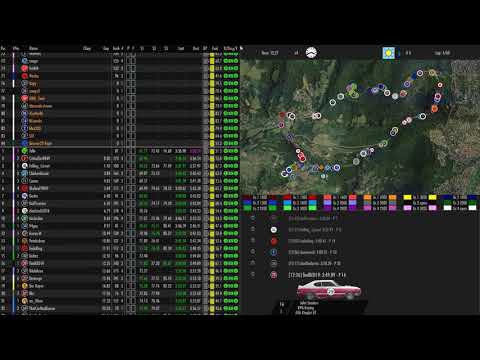 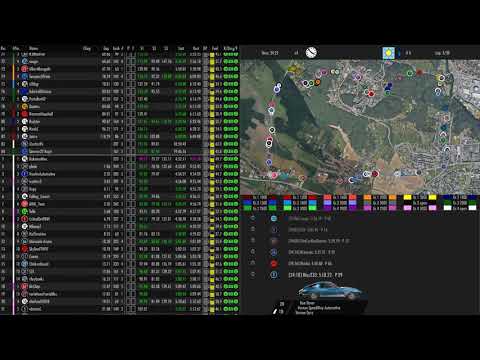 Here is the data:

How to submit strategy updates

Please send me a PM with the following information:

@Der_Bayer Just checking to make sure it’s not a misunderstanding: Both the Masaryk and Charade races will be 6H races? as the Info on the Masaryk practice results YT vid says “Race session for the 1970 24h race on the Circuit the Charade”.

I assume that’s just a typo?

And the test results only show the tyre wear (well, lost grip) over the complete practice stint, right?