Purpose of this guide
This car designer guide will go through the entire car design process, asides from engine design, as this is an topic on its own. Also several mentions will be made as how design choices can lead to good, or poor performance. These are not absolute truths, but may stray for min-maxing in certain scenarios.

Additional context information may be given in cursive and are not required to complete a car build.

This guide still is heavily work in progress

Right, let’s get to it then. As of right now in automation, for a car you have a model and trim. A real world example would be Ford Focus as model, and RS or Vignale as a trim. As such trims within a model are bound to the body and the chassis/panel design choices you made for the model. Also a “facelift” would be a new trim of an existing model, and as such trim and model years may differ in Automation.

Asides from outright cost also the production units (PU) and engineering time (ET) are to be considered. Production units is how hard a car is to produce, 110-120 PU in total (including engine) is approximately the effort required to build a modern VW Golf. Engineering time is how long of a development cycle the car will need for everything to be designed and function properly.

Why do trims exist? Because without engineering a brand new car and building/retooling an entire factory, you can make a model that can be adjusted to be sold to multiple target groups. This especially is common in modern automotive industry as more advanced engineering and tooling caused these costs to skyrocket. These costs have a large influence on the required vehicle markup in order for an automotive company to turn a profit.

Nr. 1: First off, select the year the model development will start at at in the upper left. Keep in mind that modern car development takes about 6 years, and in the early days (1950’s) about 1-3 years.

Nr. 2: Filter out what kind of car body you want to use. Often the available bodies can be several types and as such if you go by visual reference you could miss the perfect body for your build.

(Nr. 4: The model and trim name of your current design, the button can be used to switch between them.)

(Nr. 5: The engine family and trim name, the button can be used to switch between them.) 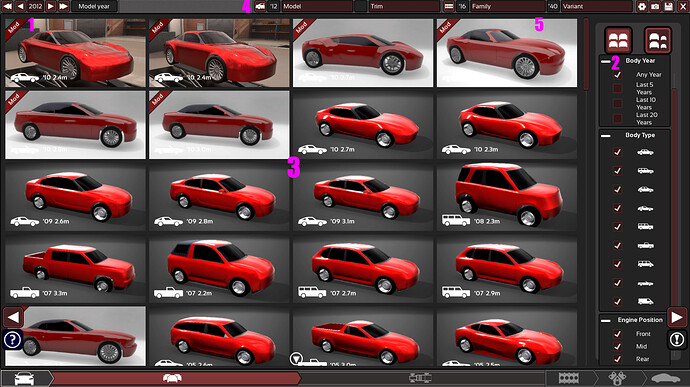 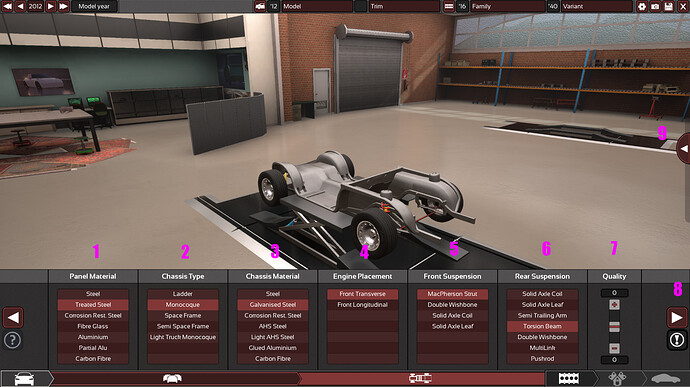 Nr. 1: Panel Material: The fabric of the clothes your car will be cladded in.

Nr. 2: Chassis Type: the kind of spine the car has. As usual cost, production units and engineering time are things to consider. Your chassis type may also influence the car’s weight, rigidity, safety, offroad and utility. Rigidity is something that very slightly improves tameness, sportiness and comfort, as a chassis that flexes is both undesired for handling and comfort (panels creaking as the car distorts).

Nr. 3: Chassis Material: The material your actual chassis is mostly made of.