Im in my 3rd campaign and, besides being good making off-road utility and normal cars i suck at making the sport ones
The biggest problem? Unstable vehicles after 120/140 mph
In the automation test track at the big straight curve when it becomes time to turn the cars goes like soap. At the min’ turn, bang, starts to slide and i loose all grip
Im in the 60’s now, so they are rwd, no assist and 200-280hp
I tried everything: Suspension, aerodynamics etc
I dont want to put aero because now im making kínd of a ferrari daytona (most of the 60’s sports cars didnt have wings and they could reach good speed without being death traps)
Does somebody have any tips? Thanks!!!

A lot of things don’t get passed from automation to beam as you would want it to be, so plenty of the tweaks you do on Automation to get the most sporty car would not make it very good on a track on beam. For example, all front aero from automation is absolutely worthless in beam.

My best suggestion is to check out the AIT Discord, they’re experts in what goes from automation to beam and they regularly stage AI competitions like that.

But the most basic things you can focus on are: tires(wide is better) and weight distribution(A rwd drive car from the 60s with a rear mounted engine is the definition of a death-trap, however you look at it)

Wings only work in beam. And if you don’t have wings the car is very very floaty and as you said yourself, you lose a lot of grip. Try adding some small wings and then making the wing angle very low. If you want it to be balanced look at the weight distribution of the car and try to balance the aero in that same distribution.

What I meant to say was indeed that the automation ‘front aero’ fixtures, indeed only lips and spoilers, are useless in beam. But how often do you place a ‘Wing’ on the front of a car

? That makes the front aero slider in aerodynamics also irrelevant, which was my point.

When I’m going to drive in beam…
Every. Single. Time.

The front aero slider when used with a wing, works like it should in beam. Yes obviously having lips and spoilers work too would be great, but they’re made differently to how a wing is made / modelled for automation.

So maybe your point could be - things get confusing with lips and wings in the automation downforce tab - but that’s it.
Using a wing for beam is like, almost common knowledge at this point for regular players.

Yes, i get it. But under this context, which is the campaign mode, one is trying to make realistic looking cars.

That’s why there’s such things as hidden wings on the front. There are various wings which have their attatchment point on the edges, and when you put it on a bonnet it goes inside the car, and you can’t see it. I can show you some examples if you wish.

I think I get your point. So you use hidden wings to do the same as what the spoilers/lips should do?

I feel like we’re hijacking this thread, but yes, I would like to see some examples indeed.

I think this could help Joch50 actually, since he doesn’t want to make the car look like it has wings, but maybe he could hide them instead.

Wings which are good at this?

So we take it out, and place it. 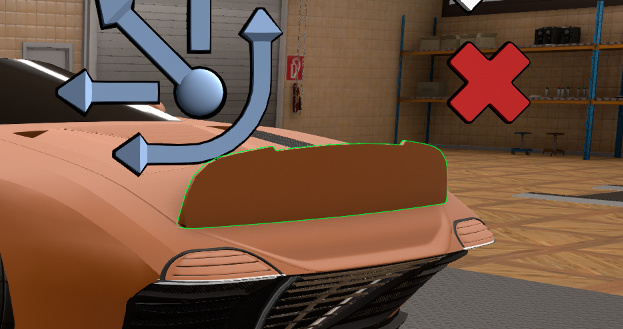 It doesn’t matter what angle the wing is at on the body, the wing angle in the aero tab will decide what it does, so this isn’t acting like a brake, just as a wing, providing downforce, but this isnt that helpful, so we can move it backwards (because this wing attatches at 90 degrees to the body) until it snaps flat.

image705×318 77.7 KB
Depending on what you have infront, or what is behind you can try the mode on the left of where i’ve highlighted too, sometimes works better.

Now I’ll do the same for this wing, it’s not quite as good on this body. (It works much better with a steeper front nose angle)

And for the rear? how would you hide a wing there. Well you do the same, but this time you just turn it around.

Using this button we can switch it, and it is now facing the other way. This doesn’t mean it’s going to provide lift, it just means visually, its the other way. This would work better with the wing that conforms but there’s enough pictures in here now.

If it helps, a “wing” is just a flat plane, and the “angle” of it is decided in the aero tab. Hopefully this helps.

This is a great guide, thanks! There should be a pinned thread about this around here in this forum.

what actually counts for beam is the size(area) of the wing(and then with the angle we set in automation).

Yes, that’s right. the scale of the wing in automation does have an effect, but to follow onto your second point, I’m pretty sure having two wings is better than having one wing of double the size because the angle multiplies it (?). Could be wrong, would have to ask Killrob or someone.

It’s best to think of beam and automation as seperate games (because they are) and what will work in one will not always work in the other. Values for suspension in beam is always softer than automation says, so graphs can look a little weird. Cars also roll a lot more in beam than automation says.

Beam also does not do fluid dynamics, hence the area and angle stuff.

We’re getting into stuff I don’t know much about, and neither do others apart from maybe the devs, but you should have enough info to make a decent car in beam.