Cascadia Inc. was initially founded in 1950 as an exporter/importer of Japanese cars to the North American market. They were founded by a Japanese businessman looking to expand his interests beyond war-torn Japan and taking advantage of family connections in Canada. As such, the company was established in Osaka and Vancouver simultaneously to handle both sides of the process.

Following several years of a growing business shipping various Japanese models to Vancouver (and the occasional North American one into Osaka), Cascadia began development of their own kei cars for the burgeoning market. Using existing engines from established manufacturers, Cascadia was able to quickly have the K360 city car and V360 cargo and passenger vans developed and available in 1955.

Over the years Cascadia expanded enough to begin using its own engines and expand its model lineup. In 1977 it became part of the Royal Canadian Motors umbrella as a subsidiary for the mutual benefit of both. Cascadia allowed RCM to have a hand in the hard to crack Japanese market while RCM provided the funds for Cascadia’s expansion around the world and to develop localised models of its cars with larger RCM engines. 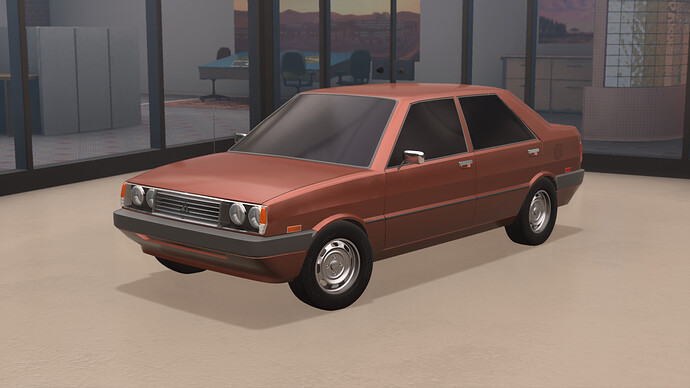 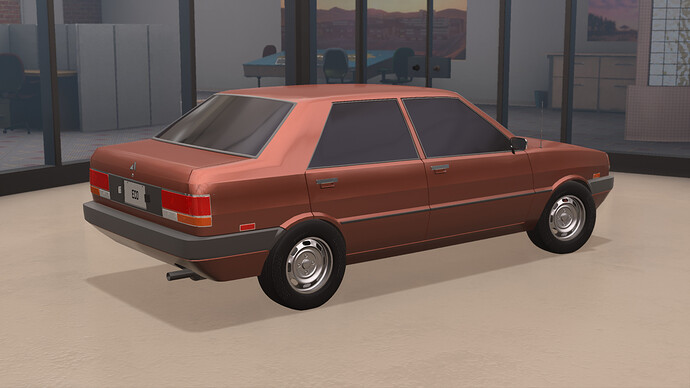 The Combo was the first all-new Cascadia model under the RCM umbrella, introduced in 1977 and facelifted in 1979. The North American model made use of a 1.7L I4 producing 69 hp and 83 lb-ft of torque. The combined cycle fuel economy of 23 MPG was not to the level of subcompacts, but Cascadia figured North Americans would find it reasonable for the extra space and power a compact offered. The Combo was also available as a three and five door hatch, a coupe, and a wagon.

Any chance there will be a higher-performance version of the Combo? If so, naming it Ultra Combo would be very appropriate indeed! At any rate, any car which competes with it ought to be called… A Combo Breaker! 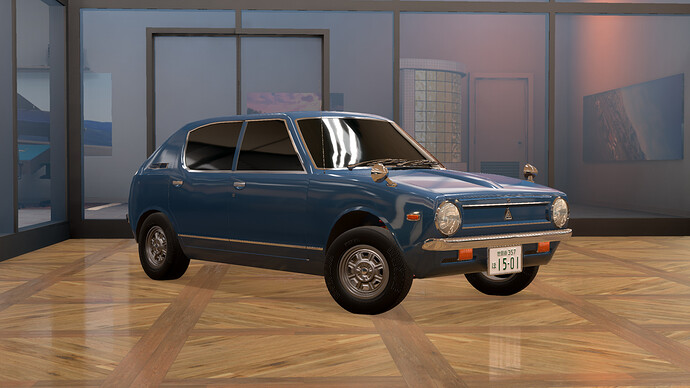 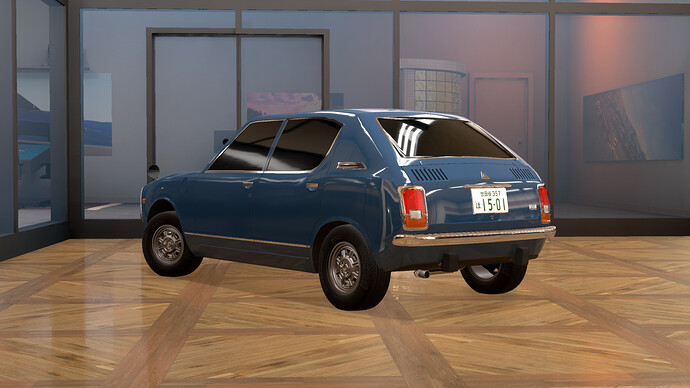 In 1970 Cascadia introduced the third generation Fuji to solidify its standing in the booming subcompact market of that decade. Like the two generations before it, low production and running costs were earmarked as a priority, so the relatively dated rear engine layout stuck around and made the Fuji a bit of an oddity in the market. With its 1.0L I4 producing 50 hp and 56 lb-ft of torque. The 22 MPG it returned in combined fuel cycle meant the Fuji was a decent success when introduced to the US market following the 1973 fuel crisis. Of course, should the car stay below 55 mph then the fuel economy was significantly higher…

When a new generation was introduced in 2015, the Hashima bucked the trend of SUVs turning into crossovers. While remaining a more “traditional” SUV meant lower sales than a comparable crossover, Cascadia saw the need to keep supplying the compact SUV market. The Hashima uses a modern monocoque design, but after that it’s quite traditional: solid rear axle, longitudinal-RWD/4x4 drivetrain, as well as offroad tires and a skid tray on the 4x4 models.

The 2018 facelift didn’t change much of the successful recipe, mainly adding more LED lighting and updating the interior. The EH models with the V6 did use an updated version of the RCM V6-M S3. This 3.2L V6 produces a reasonable 213 hp and 210 lb-ft of torque, and while acceleration is nothing stellar with the offroad tires equipped on the 4x4 model, it still manages to average a respectable 25 MPG. 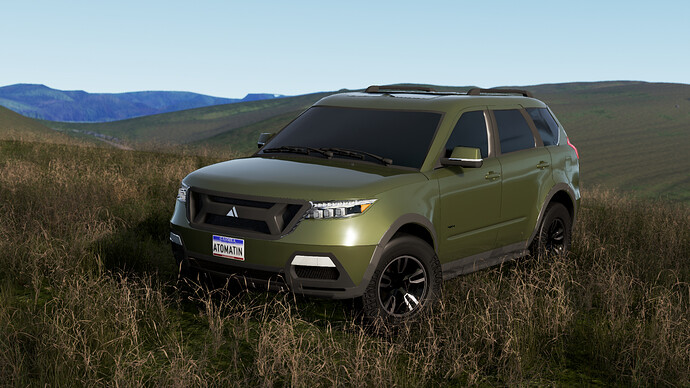 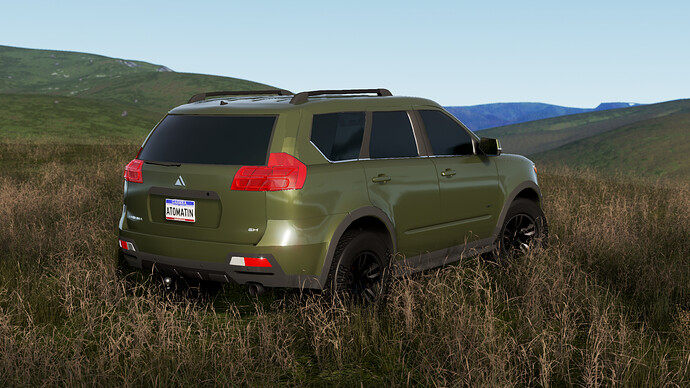 Released in 1985, the second generation Stellar was a little slow selling in North America so in 1987 Cascadia threw in the 1.5L version of the RCM I4-S engine to give the car that extra pep consumers expected. Available as a hatcback, sedan, and coupe, the Stellar found better footing with the 74 hp and 84 lb-ft engine that returned 35 MPG and a 0-100 km/h sprint under 12 seconds when paired with the 4-speed manual transmission. 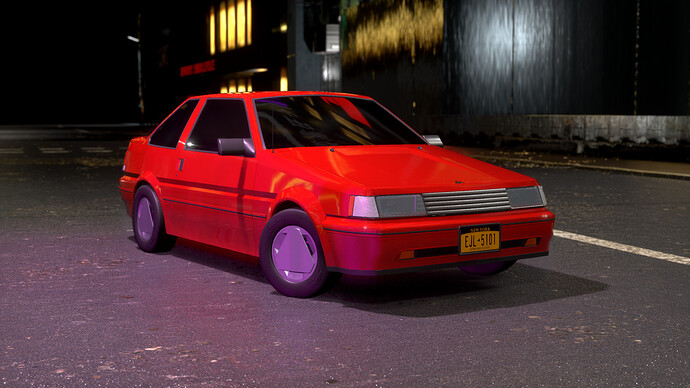 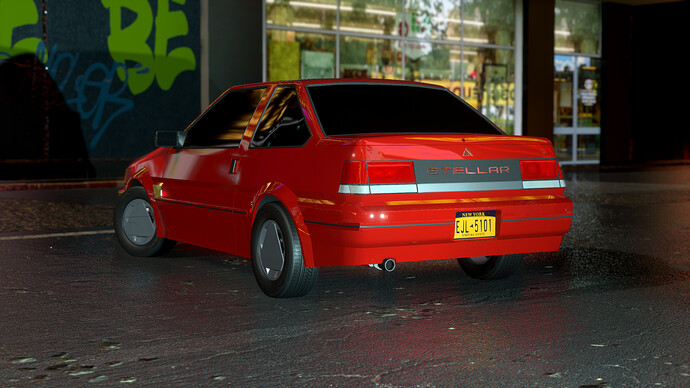 Not only beautiful, but Cyberpunk worthy. You should enter a modified version of this one in CSR

Not only beautiful, but Cyberpunk worthy. You should enter a modified version of this one in CSR

Hahahaha!!! Hosts aren’t allowed to enter their own competition… But it is indeed a very nice looking car, making my smallest Bogliq look rather amateur in comparison!

Hosts aren’t allowed to enter their own competition

In 1992 Cascadia replaced its Garu compact sportscar with the Hariken, a front-engined, RWD car that quickly gained a huge following from enthusiasts around the world in a time where most cars in the segment had transitioned to a transverse FWD layout. This 2+2 coupe was available as a hard top or targa offering a range of naturally aspirated and turbocharged I4 engines as well as a V6 option. The 1996 facelift aimed to improve everything about the car as well as updating the styling to fit the times. 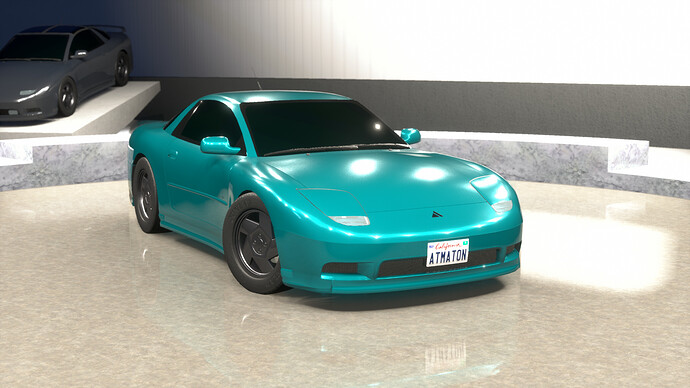 The VT model was a step up from the ST and used the RCM I4-M as well, but in its 2.0 Turbo Sport configuration that produced 187 hp and 193 lb-ft to allow a 0-100 km/h time of 6.5s and an average fuel economy of 32 MPG. This made the Hariken VT one of the few cars that got a bump in fuel economy with increased performance. 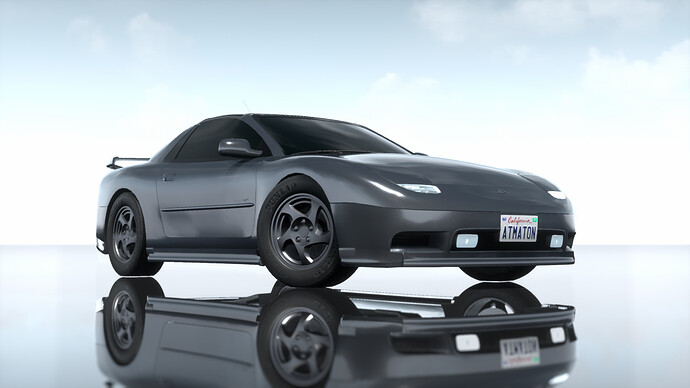 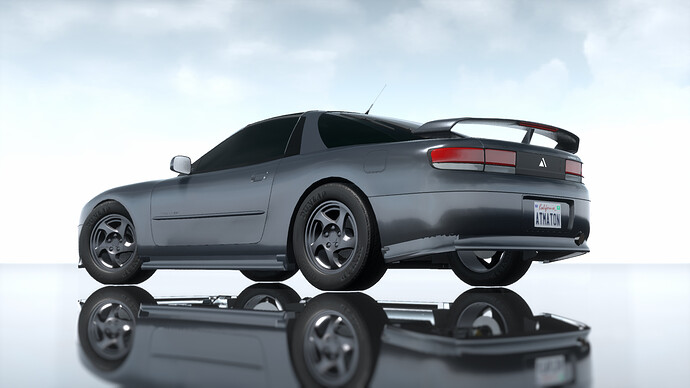 The S trim was the entry level Hariken, using the RCM I4-M 2.0 S. This engine was updated for the facelift and produced 143 hp and 128 lb-ft, enough to get the Hariken to 100 km/h in 8.8s and return 32 MPG. The facelift got rid of the popup headlights for some sleek composite units while also adding a wing across the entire model range. 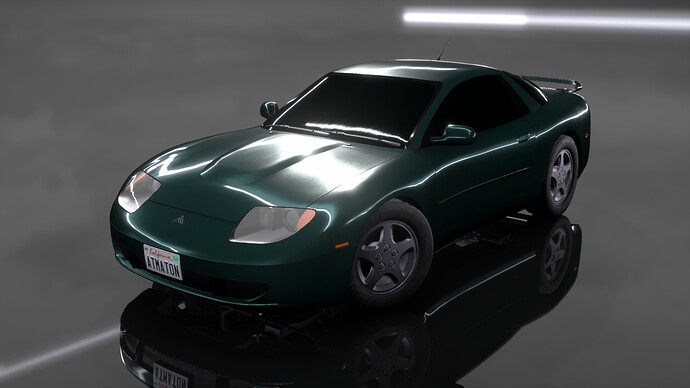 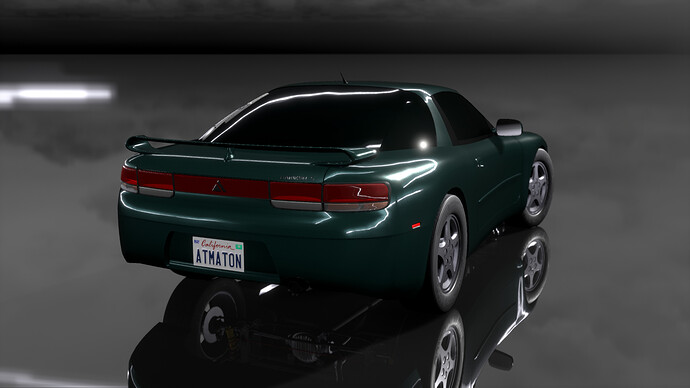 It wouldn’t be fair to talk about the Hariken without mentioning the one seen in the 2001 blockbuster movie ‘The Agile and the Angry’ that was modified in the period’s tuner style with some heavy performance mods. The engine displacement was increased to 2.1L and boosted to 290 hp and 266 lb-ft with all new interals, the transmission swapped out for a 6-speed unit with an LSD. This allowed for a 0-100 km/h in 4.8s before factoring in the nitrous oxide. 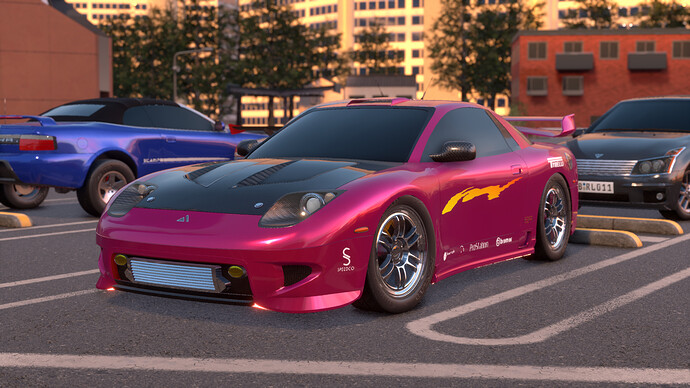 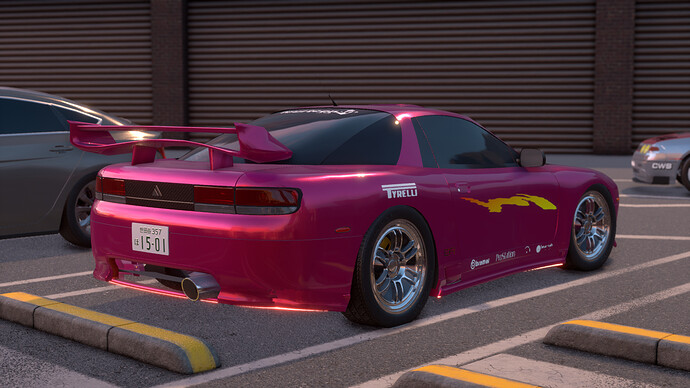 From the moment of its initial introduction in 1969, the Cascadia Moonliner offered 4WD models to buyers who needed offroad capabilities in their vans and minibuses or needed van or minibus capabilities in their offroaders. By the 1990s the explosion in popularity of SUVs meant Cascadia was after new buyers for the Moonliner 4WD by offering an alternative to the typical SUV for family duties. Introduced in 1992 and facelifted in 1995, the fourth generation Moonliner 4WD found itself as capable as the average SUV and as comfortable and practical as the average minivan.

Powering the North American model was the RCM V6-M 3.4-3EU, a 3.4L 24V DOHC V6 found in a variety of models in the RCM family and producing 162 hp and 195 lb-ft in this configuration. Paired with the standard 5-speed it reached 100 km/h in 10s and returned 20 MPG, putting it on par with SUVs and MPVs from the era.

Interior features include velour or leather seats with optional second row captain chairs, a 6 speaker stereo with optional CD changer, and additional comforts such as an ice box, TV, and thermos. The standard bench seat version has the rear seats folding into a bed, a holdover from the Japanese model. 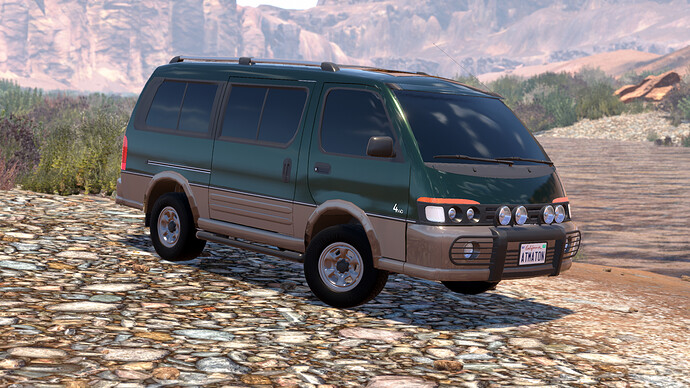 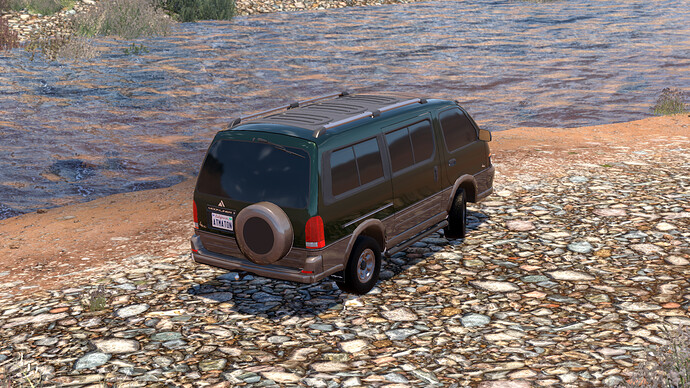 Introduced as Cascadia’s first ‘crossover’ in 1999, the ALV (Active Lifestyle Vehicle) was facelifted in 2002 to keep up with buyer demands. Effectively a raised tall roof wagon, the ALV was a push to to give a car some of the SUV characteristics people wanted without sacrificing the car side of the equation that was handling and roadgoing comfort.
Styling wise, the facelift has thoroughly modernised the front and rear ends, added brushed metal accents both inside and out, and updated the body cladding for a cleaner look. 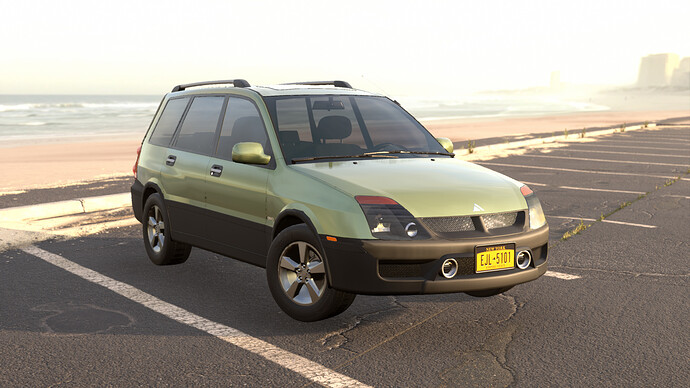 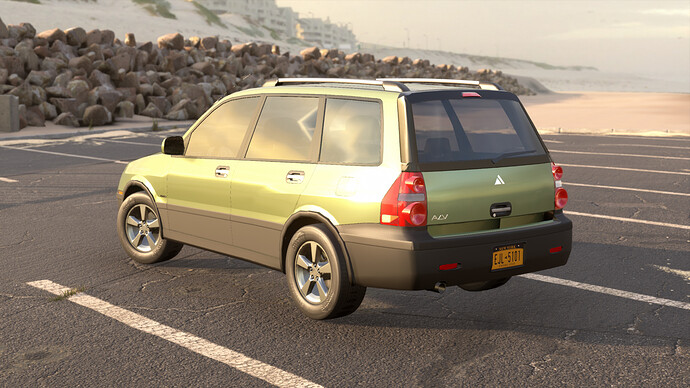 Introduced in 2002 and facelifted in 2005, the Solaris Sport Coupé provided Cascadia buyers with a sporty compact coupe based on the conventional Solaris compact. With the upcoming new generation of Solaris for 2008, Cascadia decided to heavily facelift the SC to resemble the new generation Solaris rather than spend the money developing a new low volume model in a shrinking segment. As such, the 2007 Solaris SC was an update on the design and engineering that offered a bit of an early preview at the next Solaris. 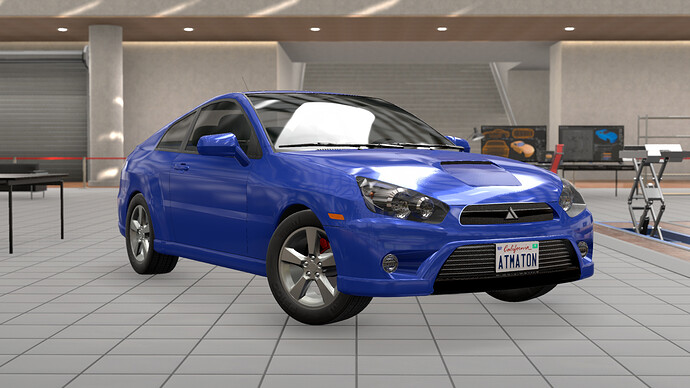 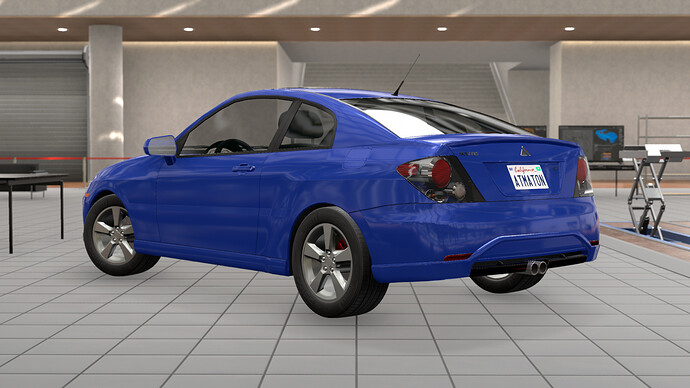