I am General George G. Franks of the Gasmean Army Corps. My forces are currently using Tiger Defence M1422 Personnel Carriers [Photo Attached] for patrols and active combat, however, these were first introduced in 1986 and are starting to show their age quite spectacularly. We have put out an open call to any contractor to build us a suitable replacement for the M1422 to begin production and delivery by late 2019. This vehicle must be resistant to explosives, while also being fast in open spaces, and excel at conquering any adverse terrain it comes across, be it in our territory or our neighbours.

Body Types must be SUV, Pick-up Truck, or Van

Any Other mods allowed, if I’m missing some I will let you know.

Make it look like an MRAP/APC and don’t just send me Uncle Bob’s Ranger.

Photo/Advertisement/Proposal in thread and the .car file PM’d to myself (@Vri404).

Name Scheme is shown Below.

Judging will be completed on the Open Beta branch of Automation.

Good that you’ve listed them, but just to be very sure you still don’t get innundated with illegal entries you best include pictures.

I’ll do that tomorrow, don’t have time currently.

Time to whip out my Romanian utility company.

U should set budget limits…

There probably isn’t a budget since you’re selling your MRAP, etc. to the military.

Well that make sense. all good then

I think the furry mods should be banned as well because their only purpose is for making meme cars.

Unitl you posted that I was convinced that that was exactly what the army was looking for. Thank you.

Yo we out here

NGL that be p fresh doe

Links to banned mods have been added.

Entries are open and a deadline has been set, check OP for details.

National Defence Systems (NDS) is a military arms and vehicles producer based on Southern Australia. Since 1977, NDS produces heavy arms, light military vehicles and specialist vehicles for the Australian Army and New Zealand Army, as well as providing military equipment to many other armed forces around the world. 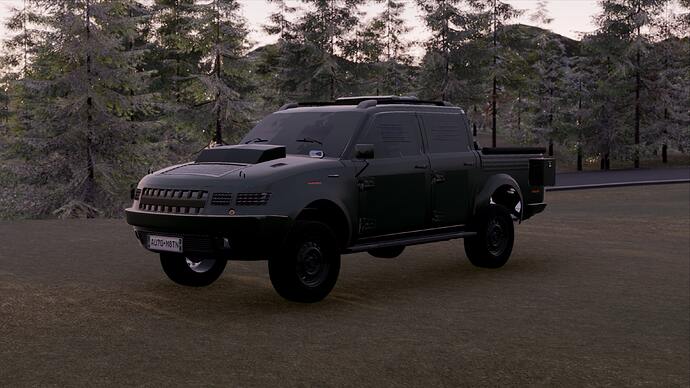 Designed as the successor to the legendary MMLARV (Military Multipurpose Light Armoured Recon Vehicle) LT-02, the LT-19 is the next generation of specialized light military vehicles. Redesigned from the ground up, the LT-19 features more advanced features and an all-new pickup design. 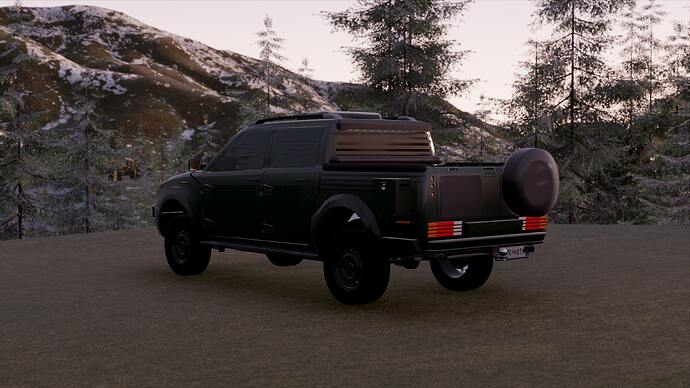 With an all-new layout, improved performance, stronger protection against dangers and dependable reliability, the MMLARV is much lighter, faster and more durable than it’s predecessors. 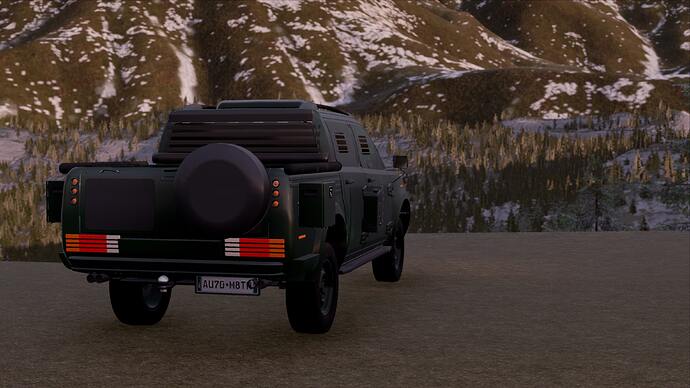 All models of the LT-02 have already started production in early 2018, but deliveries of the vehicles will not start until September 2018.

Considering the box van body has been released, is that considered banned as well?

Yes, I’ll add that into the banned mod list

Released in 2019, the Arion Hercules LAV was an extremely surprising one, coming from a premium manufacturer like Arion. 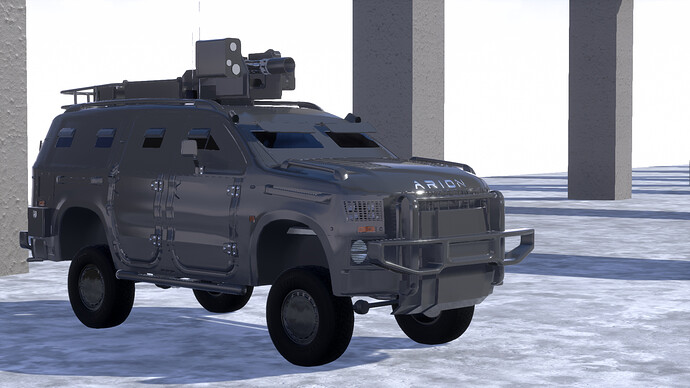 The Hercules is a Light Armoured Vehicle, weighing only just over 2000kg, which makes it quite fast on all terrains. It sports an interesting 4.0L Inline 6 Turbo, that has a very silent exhaust system, and enough muscle to make it off-road effectively, pull extra weapons and equipment in the back, or on tow which is also thanks to it’s 4x4 system and manual lockable differentials. 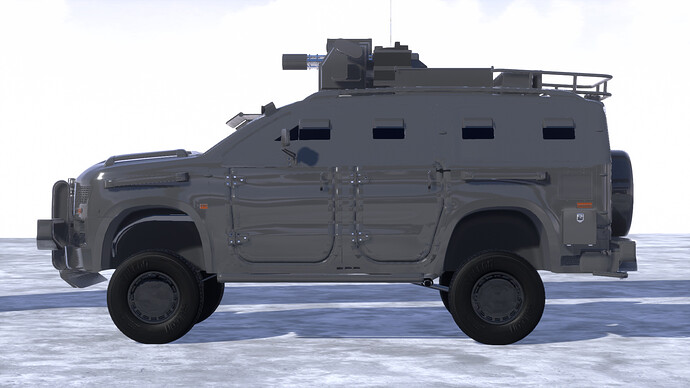 Despite it’s light weight, the Hercules LAV is armed to the teeth; bulletproof windows, mounted 360 degree turret, ramming bumpers, heat-seeking cameras, and enough storage for thousands of weapons and ammo. 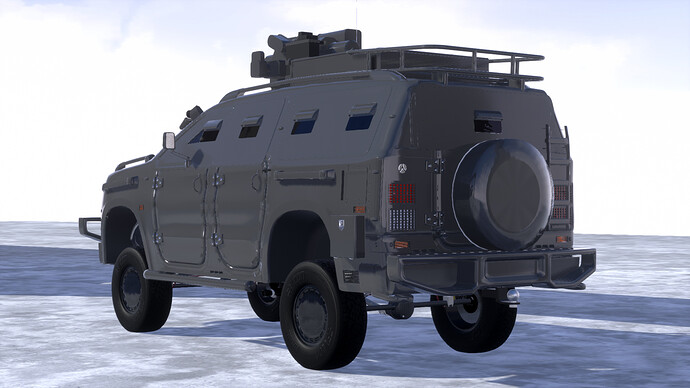 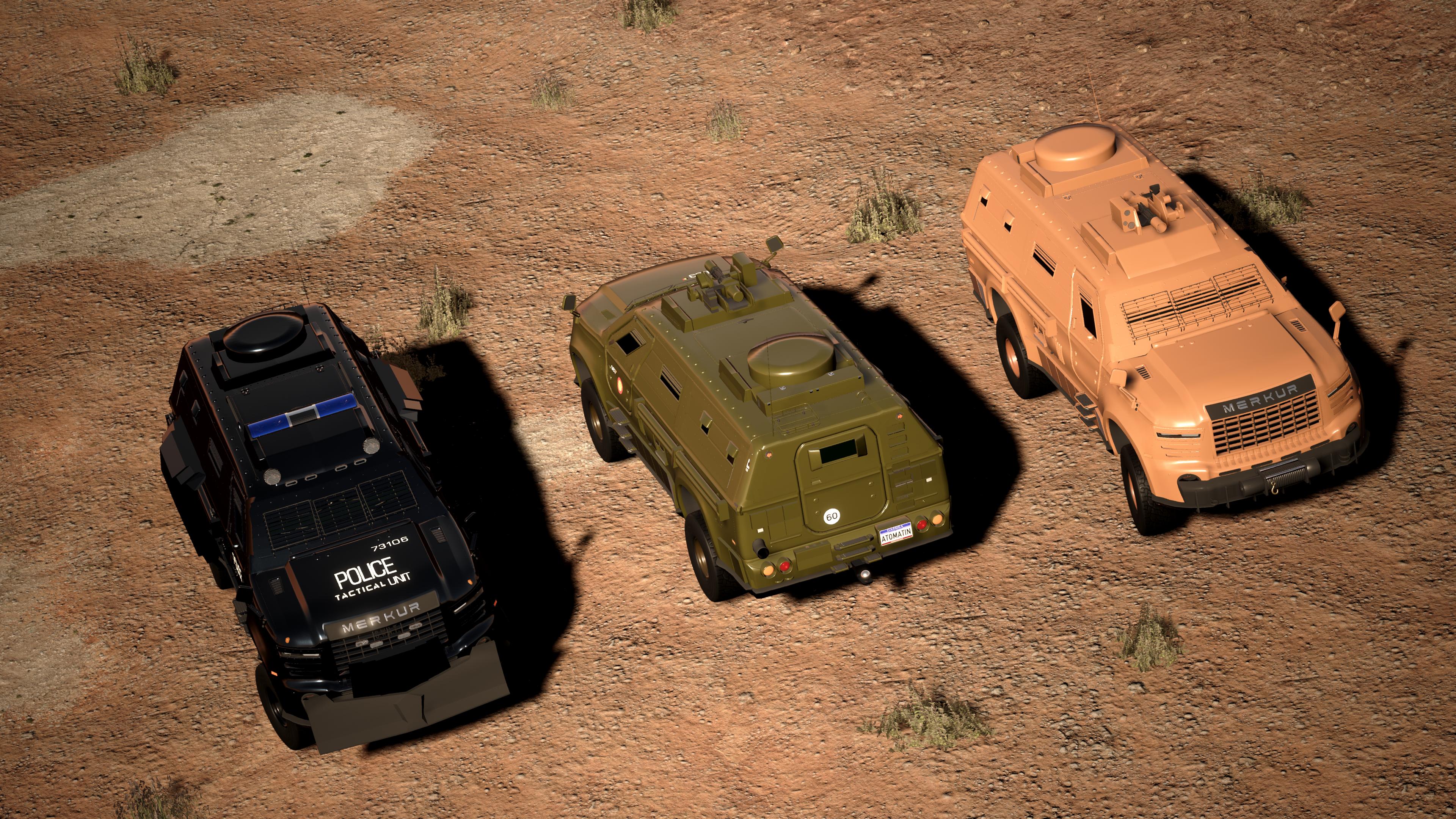 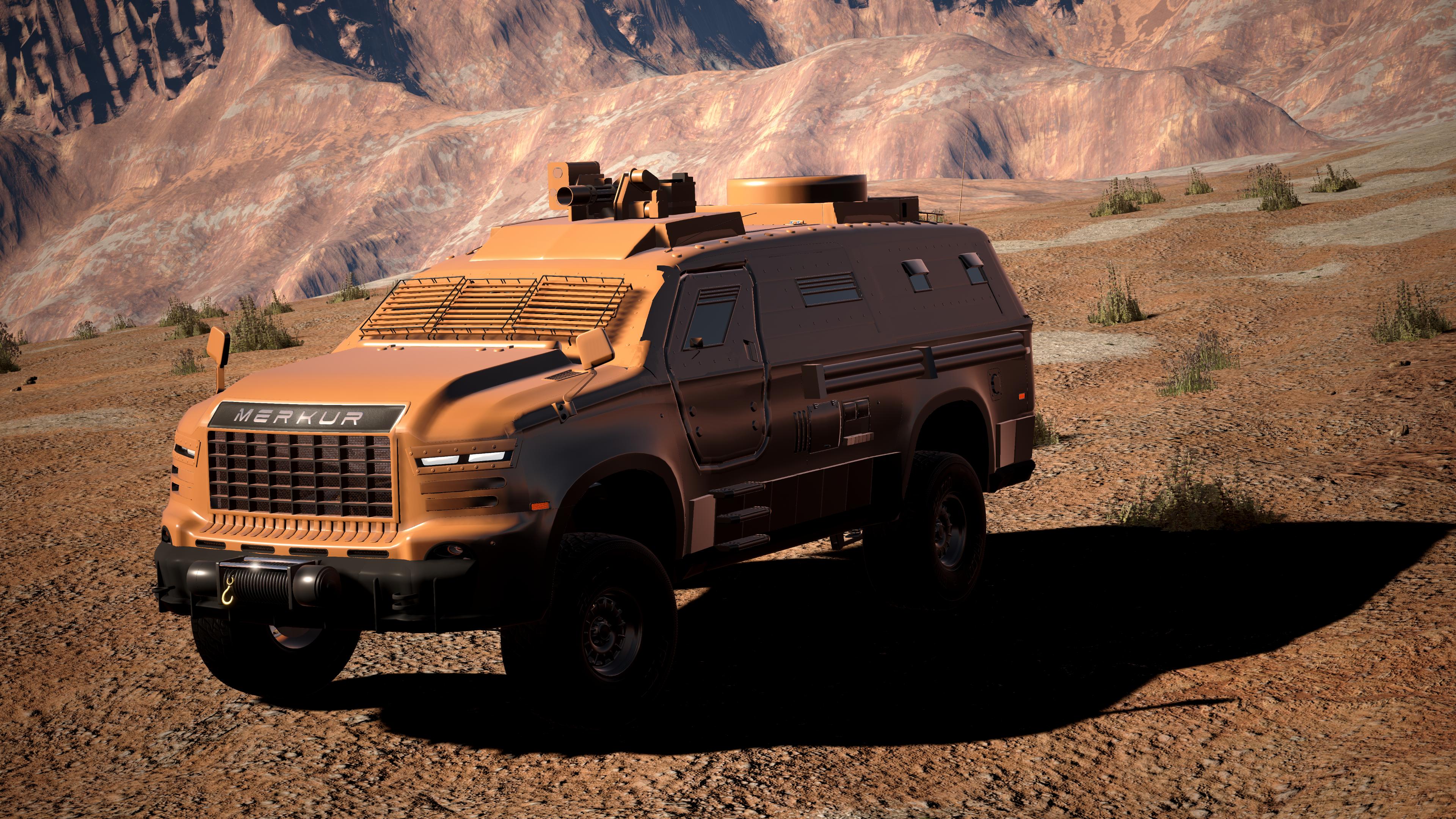 The Base-Reliable-Easy-to-Maintain is our base model from the Merkur MRAP range. Protected soldier transport in unpredictable environments is made easy with the robust diesel 4 liter 4-cylinder BREM unit with a manual 10-speed gearbox (5 low / 5 high). Built to withstand punishment and be repaired with scavanged material where needed, the BREM is designed multitude of battlefield tasks. 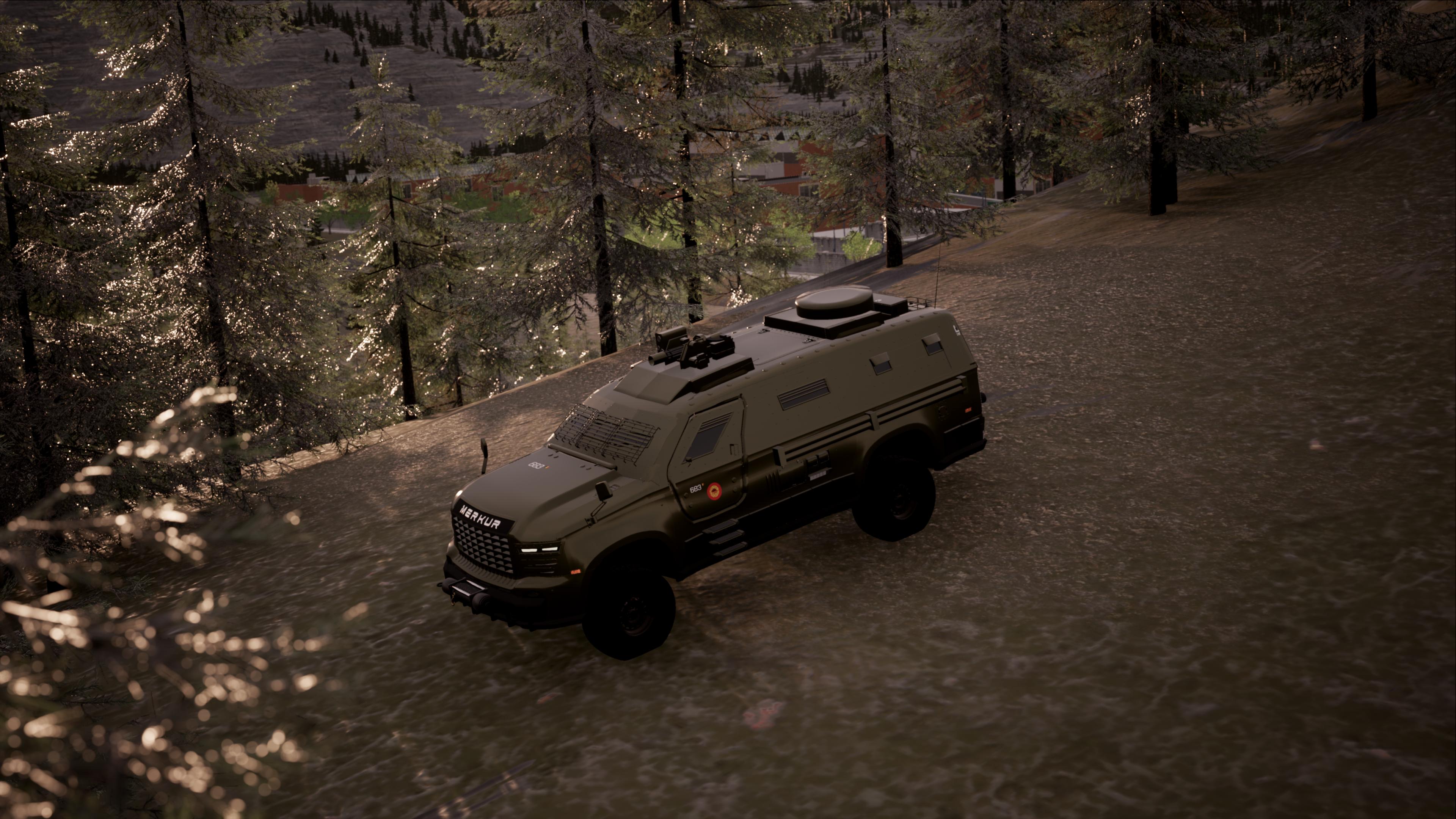 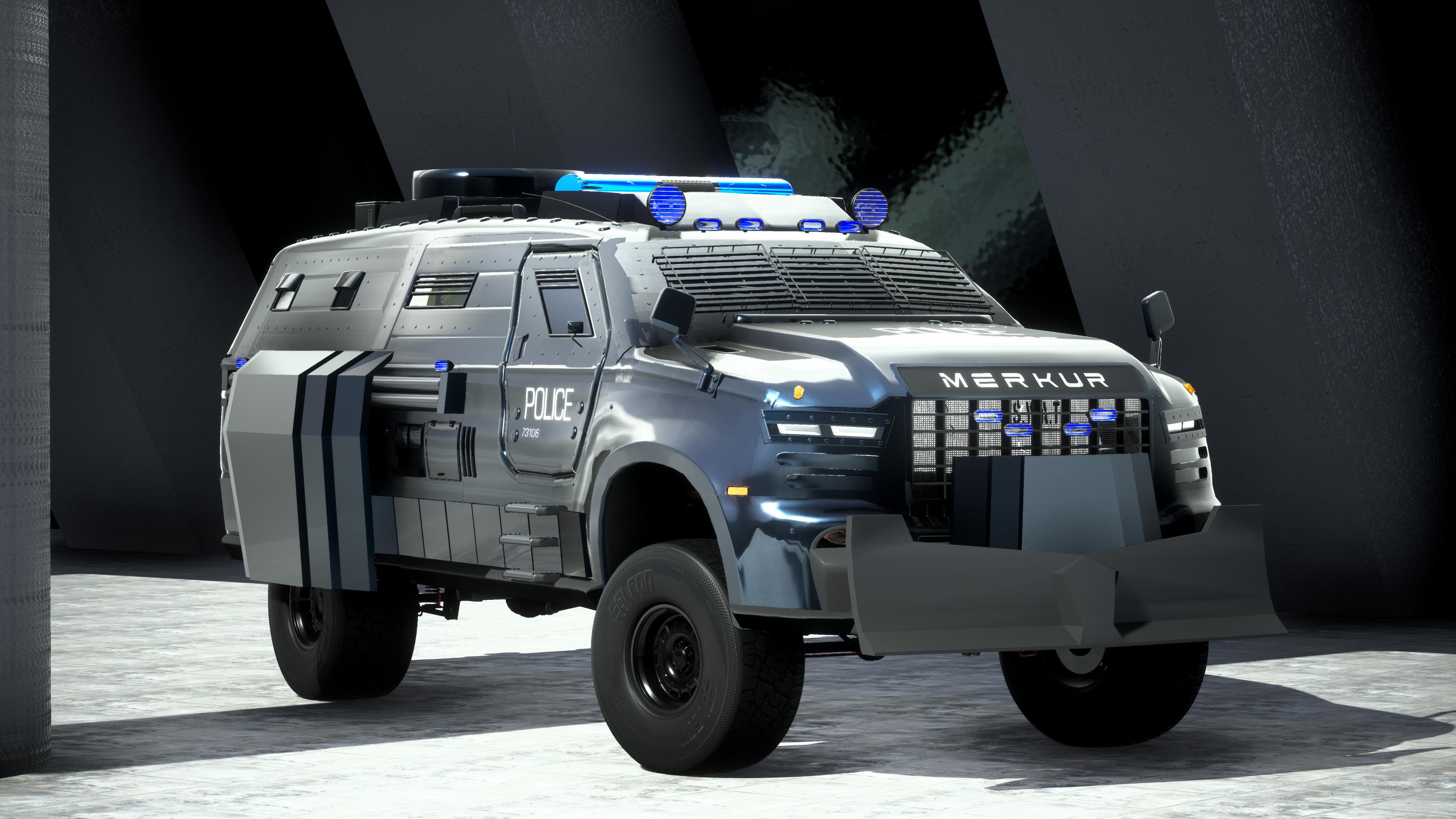 With additional armor plating, powered by a diesel turbo-charged 10 liter V-10 Fast-Operation-Reliable-Combat-Engine, the MU-910 is the fastest and hardest hitting member of the Merkur MRAP range. With high personal protection, extreme pulling power, and great performance, the MU-910 is a favourite for special units in both police as well as armed forces. (WATCH HERE) 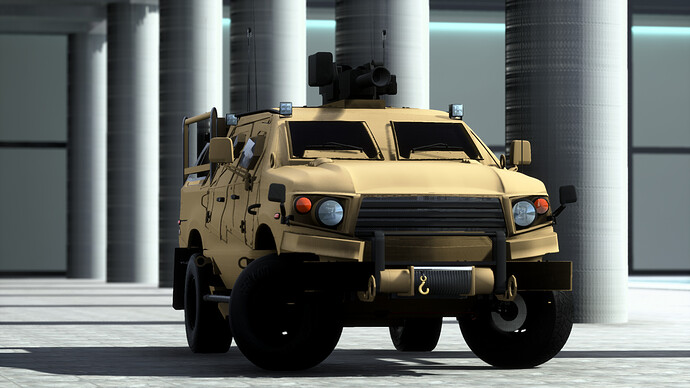 Armament Research Group’s All-Terrain Light Reconnaissance is the latest Mine Resistant Ambush Protected vehicle to be developed by the company. The ATLR platform is the perfect replacement for light scout cars and smaller troop carriers. Combining the light and nimble agility of a truck with the all-round protection of an APC, the ATLR can fulfill multiple roles. The roof mount can fit a wide variety of turrets, from an unmanned 50.cal to a 40mm automatic grenade launcher to a TOW mount. 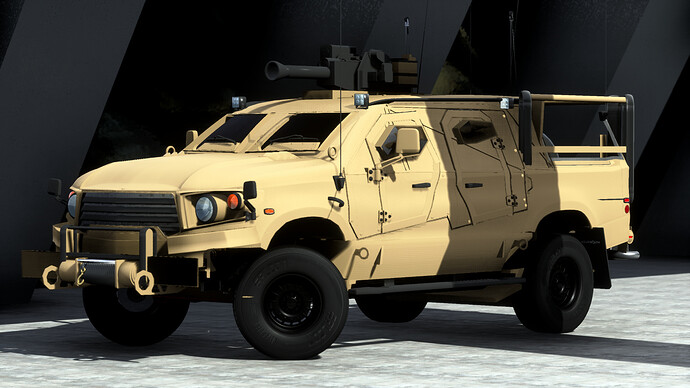 As for protection, all windows are made from bulletproof glass and are rated to withstand multiple 50.cal rounds. The ATLR is armoured in face-hardened steel with some composite plating and also features a V-shaped hull for added mine protection. The doors can also be swapped out for thicker, more heavily armoured variants. Additional mounts for ERA plates and cage armour can also be fitted all round. 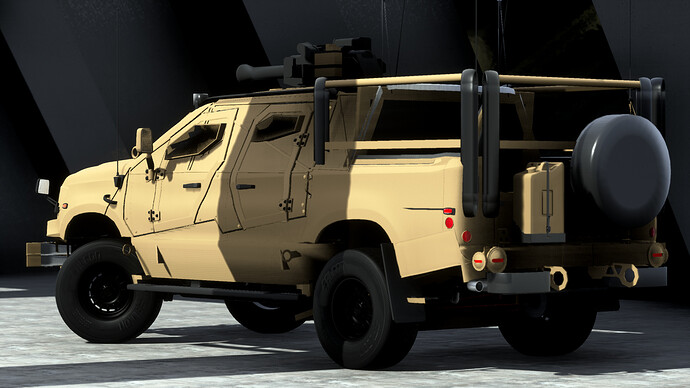 Under the hood sits a Nohda Heavy Industries MFTS 4.6L inline 5. A reliable engine, the NHI MFTS is capable of taking fire from a 7.62mm NATO to the fuel/oil/coolant system and will continue to run for at least a kilometer. The MFTS can also be converted to work as a multifuel system. Connected to it, is a 6-speed automatic gearbox, making driving the ATLR a more simple affair. Paired with manual locking 4WD, the ATLR can also traverse any terrain.

if you’re thinking of entering and haven’t, I’d get started now