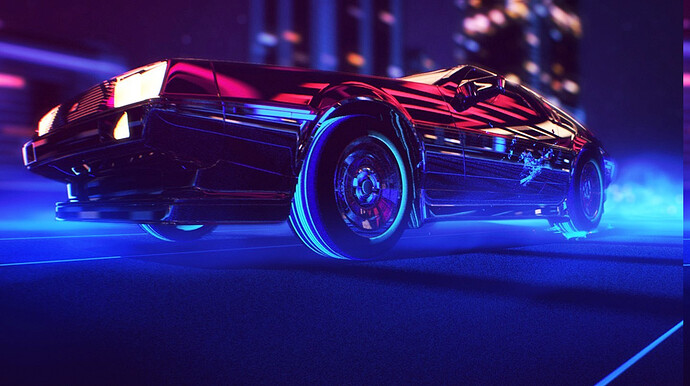 The Idea
Each round the round leader will choose a year for which an autoshow would take place. From here contestants will create a concept car that would be shown at the event. They must present an advert of somekind explaining the features of the car and its innovations and prototype technologies (Try to keep this brief).

From here their car will be judged on 4 category’s by the round leader; Creativity, Advertisement, Innovations and Reality. Each category will be judged out of 10 and the car with the most points will win the round. The winner then will proceed to host the next round.

More On The Category’s

Creativity
This is the judges opinion on how much they like the styling of the car in terms of how futuristic they think it looks and how stylish they think it is. If they think it is ugly they may give it a lower score meaning that this part of the judging is highly subjective.

Advertisement
This is how good the advert is, more effort may or may not mean more points, the category is just judged on how much forum users like the advert, this will be judged by using a poll.

Sellability
This is how sell-able the judge thinks the car is based off of personal opinion and the cars stats, this may mean that in a certain era such as the 1980’s a self driving vehicle will score lower than the 2010’s due to the public often having mixed opinions on machines ‘thinking’ for themselves

Reality
This is how realistic the car is for the era and will be judged on the overall car stats, and how possible the car would be to produce in the given era.

More Rules May Be Added In The Future

this isn’t a bad idea at all.
but i would stipulate about technical aspects to, because it’s no use to have a hypercar going up against a supermini.

Who will be round leader for the first round? (assuming it will be you).

Is it still in discussion phase because for Advertisement, I might suggest maybe having a poll for a duration of maybe 2 days to let the other participants vote fairly the best advertisement.

It will probably be more hassle, but it is really up to you.

By the way, are there LITERALLY no rules/regulations/limits to comply with? Because I really want to enter this event.

I may do a poll system for the advert, that would be a little more fair, and I will be leading the first round. As for technical aspects, I think a theme for each round would be nice as it may be unfair ‘to have a hypercar going up against a supermini’
As I said though, rules aren’t final and I would like help to make this round as fun as possible. Also as for limits, these are concept cars so be as wild as you like and finally it is up to the round leader for any other rules I haven’t yet stipulated

@JohnWaldock @yurimacs I have edited the rules with consideration to your ideas.

Before you read through to round 1, I would like to state that cars will be judged out of 10 for each category. The adverts will be judged by poll and the way that will effect scores is as follows:
1st: 20% Score Bonus
2nd: 10% Score Bonus
3rd: 5% Score Bonus
This has been added to the original challenge post for new contestants to read. 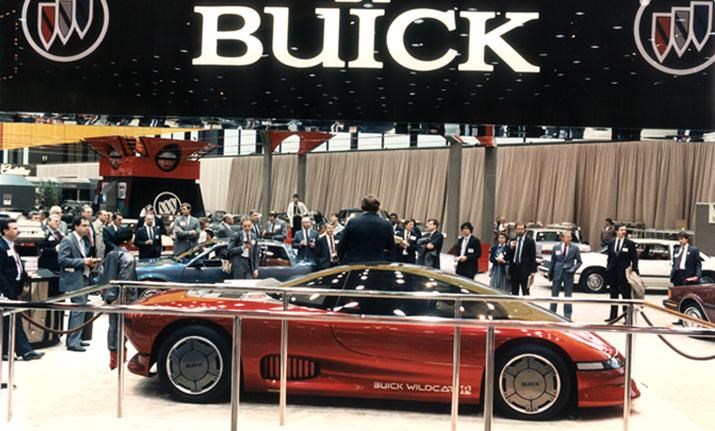 The year is 1986, thousands of people stumble into the building to be amazed by auto manufacturers and their new crazy creations. Some are next years greatest models, some showing what they think we’ll drive in the ‘future’. An auto-journalist Jean Henderson strolls down the main hall in search of creations for his sports car article coming the following month.

Your goal as a manufacturer is to create something special for the event. It needs to be something sporty that’ll catch Mr Henderson’s eye, whether this be futuristic design or a some sort of automobilia propaganda. He will be judging the cars on a few category’s; Creativity - How creative the manufacturer has been with the design, Innovativity - How futuristic the cars features are and Sellability - How well the Judge thinks your car would sell. Finally he will be taking the public’s opinion on the adverts submitted by the manufacturers.

Try to make your car innovative, this can be through in-game features or wording of your advert. Try to make your advert eye-catching, if you’re not good at photoshop then don’t worry, you may be able to gain points in the other judging category’s. Try to be creative with your design, making it sell-able for the era, but also think of the feature people though cars would have in the future during the 80’s.

Entries Must Be Have Advert Posted And Car PMed To Me Before The Deadline Or You’ll Face Disqualification.

By sports car, do you mean that the submitted trim must have precisely two seats? Otherwise four-seaters will be accepted.

Must Be A Sports Car

I mean that is needs to be aimed at a sporty market, whether it be a little roadster a little like an mx-5 or be a larger JDM style sports car like a Silvia or Supra, just make it sporty.

lol how do you score creativity on a number scale

What counts as creativity? If I only put 3 fixtures on my car and you judge it as uncreative, surely I can just turn around and say “no, it is creative because I think it’s creative”, and visa versa?

This is how innovative for the era the car’s features are, this could be a built in computer for the 1980’s or a proposed turbine for the 1950’s, try to be as innovative as possible.

This is how realistic the car is for the era and will be judged on the overall car stats, and how possible the car would be to produce in the given era.

Ok, I think I need to rethink the judging a little (maybe a lot). I could do with some suggestions here though as I would like to make the judging as fair as possible, I do think that in terms of creativity I mean, how much the judge likes the car and how futuristic they think it looks making it highly subjective to the judge. As for the part about judging how it pushes the boundaries of the era I, that’s where I could do with help from anyone that may have an idea.

EDIT: I have had a breif idea where I have changed ‘Reality’ for Sellability, this may also be subjective, but is based on opinion and the cars in-game stats. 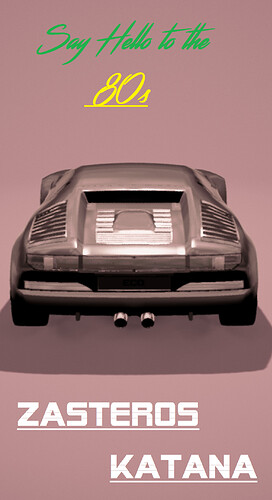 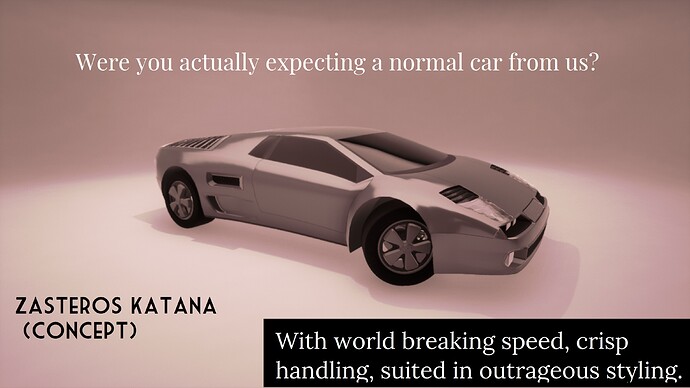