Since I changed to the open beta, I’ve been getting a warning saying: “Corrupt data found, please verify your installation”. The game will close, I’ll re-open it once or twice, the game will finally launch, and I’ll be on my way. It has finally bothered me enough to mention it, and conveniently enough, when I tried to open it today it took 10 tries and hasn’t opened yet, so I really have something to complain about now :b 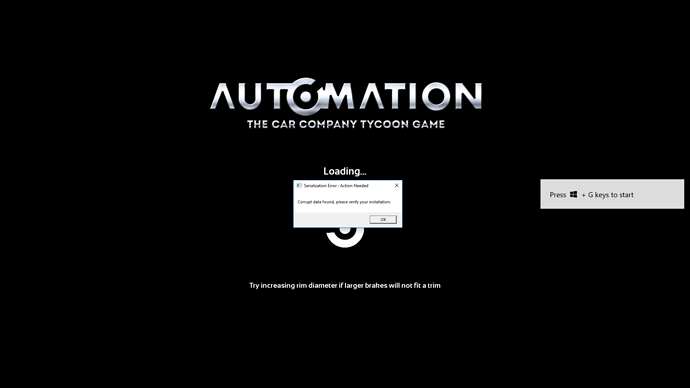 EDIT: After disabling about half of my mods (after already deleting some which were supposedly incompatible) it’s up and running again, thanks @Killrob!

Have you gone through the process of figuring out which of the mods it is that is causing the issue? They redownload themselves I would assume, then the launcher comes and nukes them, whoever goes first wins

not consistent. So have a look at which of the mods causes the issue.

I deleted them but still get the issue
I’ll be sure to try your method though (partially because Automation hasn’t been able to launch in 3 hours :b)

Having the same issues now, I cant disable Mods because I cant actually get to the Launcher. Ive been in open Beta since the beginning and this is my first time having this issue. Ive tried the default branch as well and uninstalling the game. Steam says its running but I dont have any indication of the game actually opening.

I had this same problem — here’s the fix!

First off, disable ALL mods. Then, go to:

and delete everything in there.

Next, go back into Steam and right-click Automation, go to properties and verify the integrity of the game cache. Once it finds that you’re missing files it will download them. When it finishes, restart your computer. It should then work and it should display the launcher as normal

If I’m wrong then someone correct me, I’m going off of memory because these are the steps that I took and I’m pretty sure it’ll work for you too.

That certainly would work. No need to delete the Runtime and Editor folder in there though, which means you don’t even need a verify. Nonetheless the way you describe it sure doesn’t hurt and is cleaner as it potentially addresses other issues too.