For descriptions/images check the Steam link

A new grille based on the Corvette C7, it doesn’t have any variants apart from the one shown in the picture but I plan to make more later. If anyone else wants to make and upload variants of it they are welcome to.

Seems quite nice. I’ll check it later when I get home. If you need help with the morphing, and have questions that haven’t been answered by Andy’s vid, me, Pyrlix and Kubboz are regularly on the game’s IRC.

It has some pretty interesting morphs, and while sometimes you can make some pretty messy stuff, I’d rather have too much morphing and just have to tweak it around a bit to get the body lines straight than not having enough options to morph.

My only complaint is the lack of downward morphing of the front end. It would be nice to be able to point the nose down a bit more for that pointy aggressive look.

Decided to look at it a bit more in detail and I have to say that it is quite nice, but there are still a few small things that can be made better.

The mesh itself is very good, and you don’t really need to change it. The thing I will mention is that most 3d artists make their windows slightly recessed into the body to give slightly more depth.

Works fairly well for the most part, which is very good considering this part can be hard to get right, especially in the beginning.

On the front part though, stamping anywhere further back on that zone results in very bad jaggies. I would reccomend trying to redo the UVW Mapping to try to fix that problem. What I usually do is drag a vent around to see if everything works well.

The seams on the front part do not stamp. This is probably caused by incorrect material assignation in the .lua file.

You also have some stamping problems on the upper back corners of the car, where it makes the hole larger than it should.

I would recommend making the morph that slopes the hood a bit longer. Right now it just slopes the very tip of it.
Also, 3DS Max, being the #$@!$ program that it is, will modify your old weights when assigning new ones on certain vertices, creating things like what happens with your current “front lengthening” morph.

I am personally not a big fan of the technique used as it tends to be a PITA to make properly.

Yours works well, although the top morph tend to create a lot of weird creases in the side windows.

I understand what you were trying to do, but IMHO the results are not really visually appealing. I would suggest maybe making one bone that moves what the current two move, and one bone that would extend the door in a more smoother fashion like this.

The morphs work quite well for the most part, but there are a few things I would recommend that you try to rework a little.

The upper one creates a few bumps on the back pillar when morphing up.

The lower one creates two weird spikes that show up when morphing back and up.

I would also recommend that you make the lower back morph affect a little bit more of the trunk, so it has less of a tendency to create creases.

Hoping you will continue making more awesome models like this one because you show a lot of potential.

Thanks for the feedback, I’ll look into the issued trackpaduser mentioned and see what I can do to improve it. I’ve also been working on a sedan version and have tidied up the mesh a bit, that will probably make the morphing go much smoother and I’ll probably redo the coupe when I’ve gotten some more practice.

My 60s coupe has been updated, check OP for pics and download.

60sSedan/Coupe had been updated again, link and pictures in OP.

I know you updated the complete pack on steam, so I found it very weird when I saw that.

I know you updated the complete pack on steam, so I found it very weird when I saw that.[/quote]

Thank you for telling me, it’s not an account of mine and I’ve asked them to remove it.

New coupe body that can be morphed between a Camaro or a Mustang. 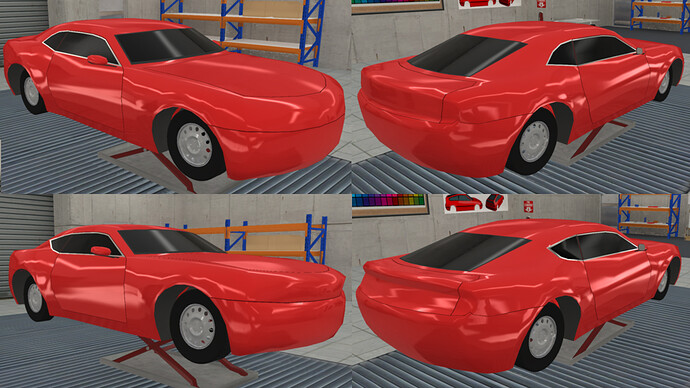 I have to say that it looks quite good for the most part, although the sides of the car have somewhat of a weird look to them.

Could you post pictures of your mesh, especially the sides?

I would also suggest to add a few polygons on the length of the car, mainly to smoothen the seams of the hood a little bit as they look very angular right now. It will add polygons but it should not cause any problems since your model doesn’t really seem to be polygon heavy.

Appart from this you did a very nice job, stamping seems to work well, and the morphs are also very nice.

Working on a Shooting Brake (wagon-like coupe) version of my 00Coupe, anyone know what’s causing this? I tested it in-game before making the rear seams and it was fine. After making them this happened.

Have you tried deleting the skin and adding a new one with only the root and one other bone? don’t spend any time with morphs, just see if that cures the mess

Have you tried deleting the skin and adding a new one with only the root and one other bone? don’t spend any time with morphs, just see if that cures the mess

Nope, I already tried reloading a backup of before I cut the seams and starting over. Same result. It’s like it was caused when I made the seams and assigned the material IDs, but I’ve triple-checked both them and the smoothing groups and nothing is wrong.

Yeah, this is caused by isolated vertices.

To fix this issue, use the following button. 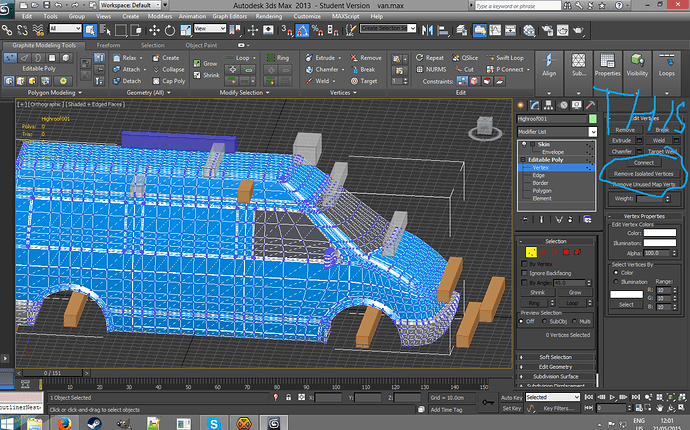