In 1965, the FIA announced that the displacement of Formula One engines to 3.0L. Two years later, the Cosworth DFV participated in its first race. This engine had an illustrious career in the premier motorsport that lasted until 1985. It also saw use in other motorsports, though with limited success. 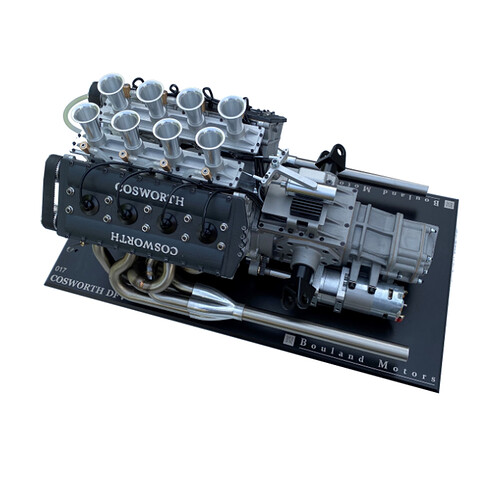 I am once again inviting you wonderful engineers to rewrite the history books in your favor. Your task? Create an engine that can rival and (hopefully) outperform the Cosworth DFV. Simple enough. Of course, there are some rules, guidelines, etc.

If you do this using low quality fuel, I will be amazed.

Extra (Optional) Challenge
Assuming that you chose leaded fuel, you need to change to keep up with the times. Fruinia, where most Grand Prix racing will be done, bans leaded fuel in 1978. You must make a trim that will save your engine from retirement.

First, an ET of 72 is unreasonable. To put it in campaign terms, a racing team would have zero automation (it’s mostly hand-built), optimization, and little reliability engineering sliders, plus a lot of funding. So, an ET of 72 months isn’t really meaning anything close to 72 months in terms of the way a race team produces engines.

Second, that ET of 72 months means you can just about afford a carbureted DAOHC I6 with a couple quality points. Needless to say that won’t compete with the (fuel injected?) dual-cam V8 in the picture.

Third, even with a proper V8 and about 200 months ET, I’m not sure you can get that power out of a 1965 3L engine in Automation. I have to wonder if there’s some gross horsepower/net horsepower confusion here. Otherwise, Automation just outright isn’t suited to this sort of racing engine. I can just crack 370 horsepower pulling out the stops with about +5 quality all around and 260ET. I managed to get 415HP with true meme quality spam of +15 everywhere, basically cheating on everything but displacement.

One of the Cosworth’s most attractive features was its price, and, while a team may be willing to pay more for a vastly superior engine, they will just as likely be, if not more, willing to pay less for a slightly better engine.

Aaand we have no idea what that price would be in the game, so?

After some testing even getting close to this set of parameters seems straight up impossible. I guess the idea wasn’t tested at all and the ET limit is pretty much random. Mmm, yes, a DFV competitor (in the ET limit): 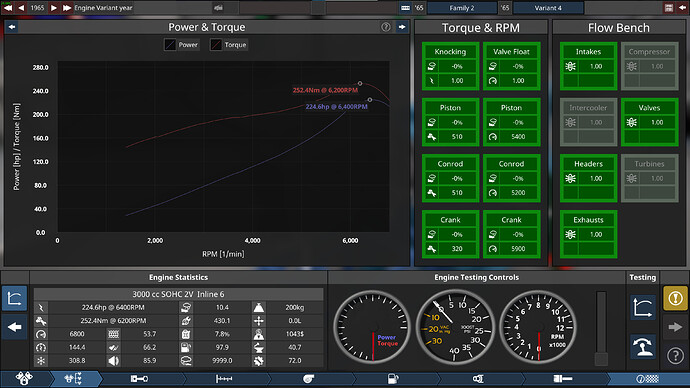 Only negative quality in the bottom end, because there it doesn’t affect the power. Note the RPM limits of the internals. And that’s with forged parts.

Sooo, to sum up, as much as I love the idea of a race engine challenge, the rules here are currently very poorly formulated.

Considering that forged internals are capable of withstanding higher revs and torque loads than cast equivalents, it would be foolish to reject them when building an F1 engine from any era, especially the ones in which this challenge is set.

Ok, forge works are fine. Based on what I can find, it cost about 7500 pounds back in 1967 for reference. Just don’t make it exceedingly pricey.

The idea of 72 is less random than it may appear. Cosworths were starting really dominate around this time, and I have seen good engines, granted under different circumstances, made in this time

Remember this is the pinnacle of motorsport. These engines are basically space age for the era in terms oh hp/L. Also they are hand built, expensive and high quality, bc they are worked very hard. The rules need quite a big overhaul, regardless i love the idea.

You can see what is possible within that limit on my screenshot above. And believe me, I know something about making engines in this game (after like a 1000h of doing just that), even if the 60s and strict ET limits aren’t my forte.

Ok, forge works are fine. Based on what I can find, it cost about 7500 pounds back in 1967 for reference. Just don’t make it exceedingly pricey.

The idea of 72 is less random than it may appear. Cosworths were starting really dominate around this time, and I have seen good engines, granted under different circumstances, made in this time

Automation isn’t really designed to compare the prices or (reliability) of racing engines like this. They’re going to all be expensive and unreliable with very small differences.

Regarding ET, really keep in mind that these are NOT mass-produced engines. The idea of using cast internals for example, is unthinkable- do you think Cosworth sold thousands, or even hundreds of these engines per month? These are few and hand-made.

Using the campaign engineering sliders at the extremes to represent this, I’d get a 75% reduction in engineering time- in other words, 1/4 of the actual time. If these engines are intended to start engineering in 1965 and finish engineering 72 months later in 1968, then an ET of 288 months (give or take) is likely. Surely the fact that it is literally impossible to make the engine in the picture with 72 ET is an issue?

Lastly once again you still can’t make 400 horsepower out of a 1965 3L engine in Automation even with 300ET. I’d be amazed if even one person can do it. (Edit: Well okay you can JUST get there

@SenseiB12 has his numbers pretty much right.
Can do just over 400 for 300ET, but not enough different ways to make it interesting.
The idea is good, but rules need work.

Well I’m open to ways to fix this mess. Clearly the main concept doesn’t work, but I still think that we can salvage a decent competition out of it. Extending engineering time is a virtual guarentee. The 3.0L is staying, but if we move the date to, say, sometime in the 70s, I suspect that it still wouldn’t be enough.

A start in the 80s could be an attempted cosworth revival effort, if that sounds somewhat interesting. By that time, these engines will be fading out in F1, but could find a second life in other motorsports, possibly.