Could use help tuning my 280ZX

So I am a huge Datsun 280ZX enthusiast in real life (I own a 1981 2-seater hardtop) and I have been working (off and on) for a couple years on a replica of the car in-game. I’m pretty happy with the looks and the engine, but I could really use some help with tuning the car itself for driving in BeamNG.

The following are screenshots of the car setup as of this morning. 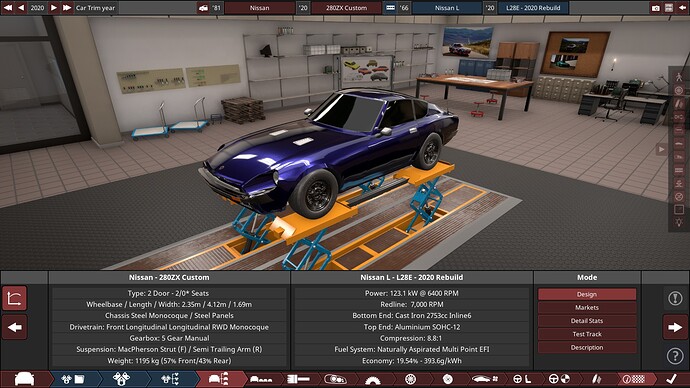 Transmission Setup - these cars were more of GT (grand touring) cars in real life, more for cruising than turning corners, but that’s not to say they are bad in the turns. 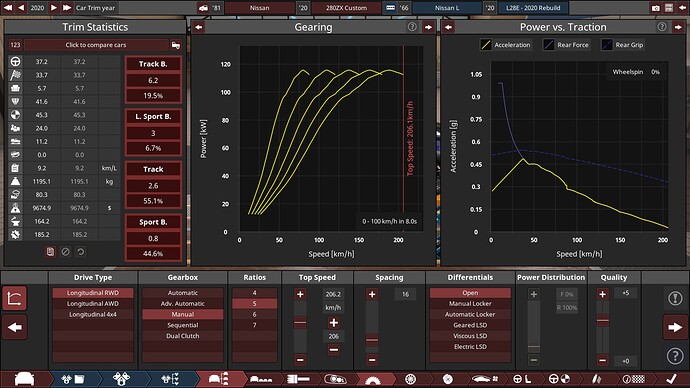 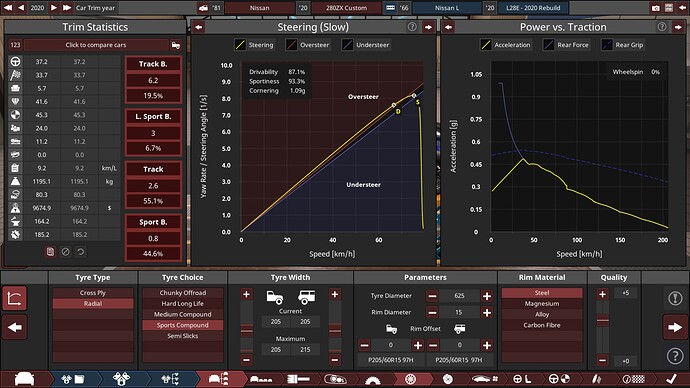 Brakes - What you see here for brake calipers and rotor diameters is actually correct for the real car. From the factory they come equipped with disc brakes in all 4 corners with the fronts being ~250mm rotors and 1 piston calipers and the rears being ~270mm calipers and 1 piston calipers. The game definitely does not like this setup and I know that newer cars (basically almost anything built after my car) has the larger diameter rotor up front, but this is how the 280ZX was built and sold. I have done a lot of playing with pad type and brake bias but the car still wants to spin the back end around under heavy braking. 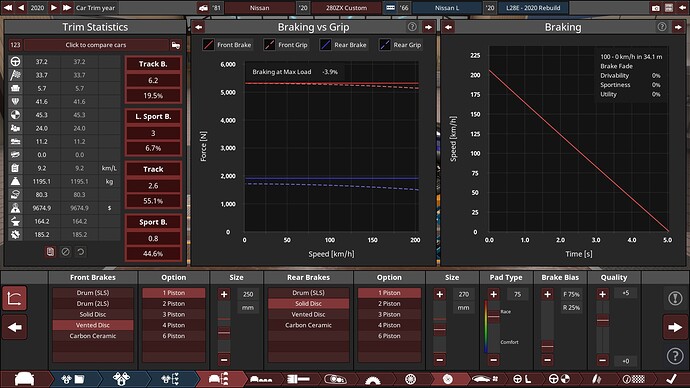 Traction Aids - It’s 1981, there are no driving aids here! The car does have hydraulic rack and pinion power steering though. 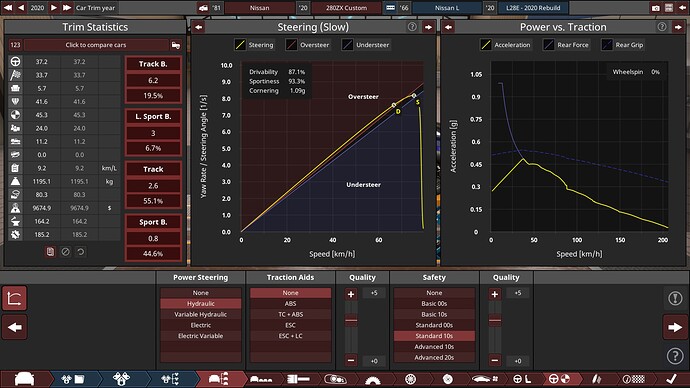 Suspension - The real cars are a McPherson strut front suspension with trailing arm independent rear suspension. Passive (solid bar) sway bars, standard springs and gas mono-tube dampers. One thing I have done to my real car is upgrade all of the suspension bushings to polyurethane from the factory rubber style, so the suspension is a bit stiffer. 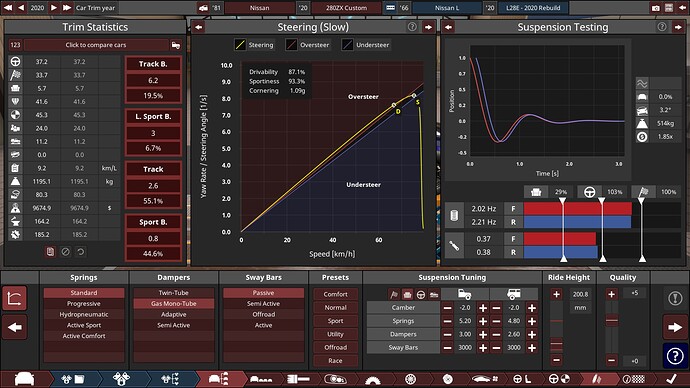 As you can probably tell from most of the setup graphs, the car is still tending towards oversteer, which I do not like when exporting the car to BeamNG. The car in it’s current form isn’t bad per-say but I really don’t like how it handles.

The first thing I would do is reduce the size of your rear swaybar. Production cars almost always use a much softer rear swaybar versus front, especially on rear wheel drive cars. If that still doesn’t balance the car to your liking, try reducing front camber. Production cars usually have more rear camber than front for the same reason, to induce understeer. The opposite is usually true on competition vehicles.

On a side note, I’ve noticed semi-trailing arms handle kinda funky in Beam, regardless of tuning. I’ve found solid axles to handle far more predictably for whatever reason. Also, if you’re trying to simulate the stock suspension in your car, your springs and dampers are much too hard. If I had to spitball, I’d say 1.3. to 1.4 hertz in front and 1.5 to 1.6 in the rear would be fairly close to reality, with the damping ratios no higher than 0.30.

it looks really good. but if I’m you, I’ll have more spacing to have faster acceleration. quality in safety also add some weight too, so if you want it to be a bit lighter, you could set it back to normal.

Not sure about specs, but I could tweak the visuals a little if you provide the car file and some pics of the real one.

Thank you for your tuning suggestions, I implemented them as best I could and the car does handle a little better.

I am still having issues with the backend wanting to swing around when braking hard and there is a bit more body roll than I would think there should be.

It also handles oddly in corners, which may be down to me using the trailing arm rear suspension setup so I may need to change that to something else (like the leaf spring setup you suggested).

Here is a fresh picture of the suspension tuning:
*I’m omitting tires, brakes, gearbox and safety panels as I did not change anything on those at this time 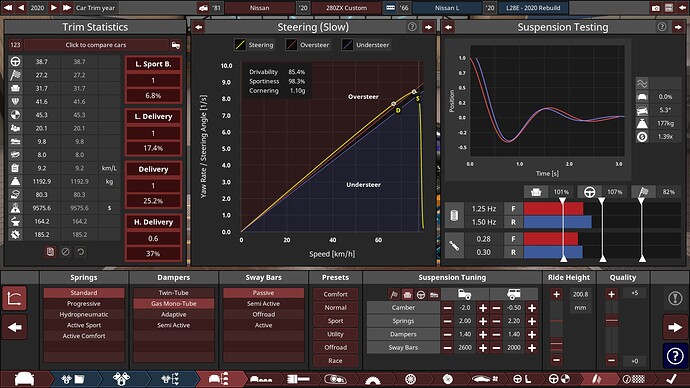 Here are some pictures of real 280ZX cars for reference.
*Note - I have my car modeled with dual round tail lights as that is a modification I am in the process of doing to my car and I think it looks better so don’t feel the need to replicate the factory tail lights.
*The 1979-1981 have tasteful chrome on the B-pillar as shown in these pictures, later models (82 and 83) have blacked out trim. I prefer the early model style with the chrome trim. 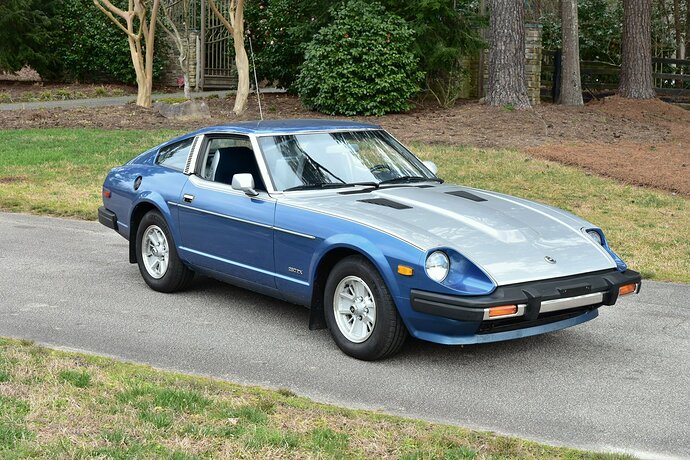 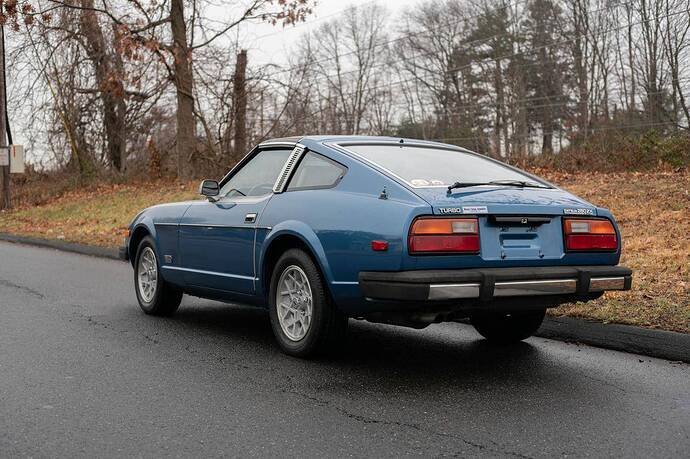 I’ll play around with the car file a bit myself. Of note, it looks like you reduced the rear camber instead of the front, which will shift the handling back towards oversteer.

Ahh, I will reverse the changes I made there. For some reason the camber setting is one of those that confuses me.

See if this works better for you. I tried to match the factory specs as close as possible, including gearing. I had to spam the chassis and safety quality to get the weight correct, but everything else is pretty reasonable. It still shows some weird trailing arm behavior when you load up the suspension, particularly under trail braking, but I think it’s much more drivable and faster overall. Let me know what you think. 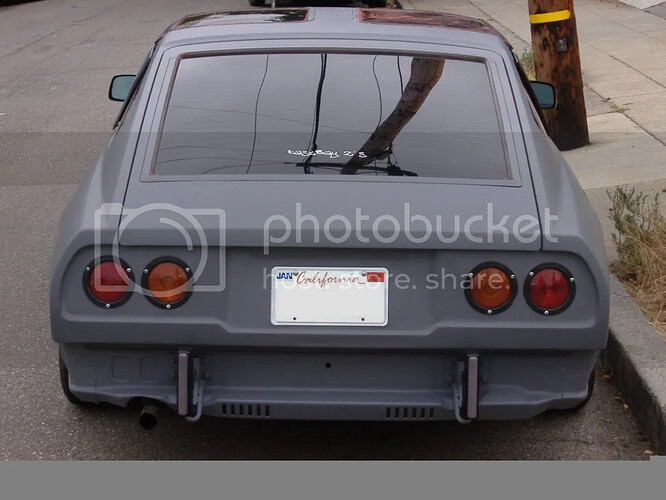 I’m working on it, theres a good bunch of stuff to be improved. Will work some more tomorrow. Looking around it, I believe you’re not playing with mods yet, so I’m trying to make all with vanilla stuff, witch leads to a bunch more challenges to make something good.

Also I’m working over @oppositelock’s version as that way you’ll not have to copy their specs to your build.

Also I’d like to use the topic to ask everyone about a pic I saw a lot of years ago and wasn’t able to re-locate it. It was a 280zx in blue and silver just like the one posted by @MadMechanic, but with a 70s skyline rear panel, with its dual round tail lights, and s13 silvia headlights with a chevy badge up front. The owner fooled non car people and cops into thinking it was a corvette. It was on one of those japan lifestyle wordpress blogs I believe. Has anyone ever seen that too?

Thank you very much for taking the time to tune the handling, I just spent about 15 minutes blasting around in BeamNG and the car is WAY more predictable than I have ever been able to set it up for.

You are right though, there seems to be some weirdness in the backend under certain conditions, likely caused by BeamNG and the trailing arm suspension but overall the car is much more fun to drive and I’m not just constantly spinning out.

Yeah, very much like that. The lights I’m using on my car are actually these from Amazon: 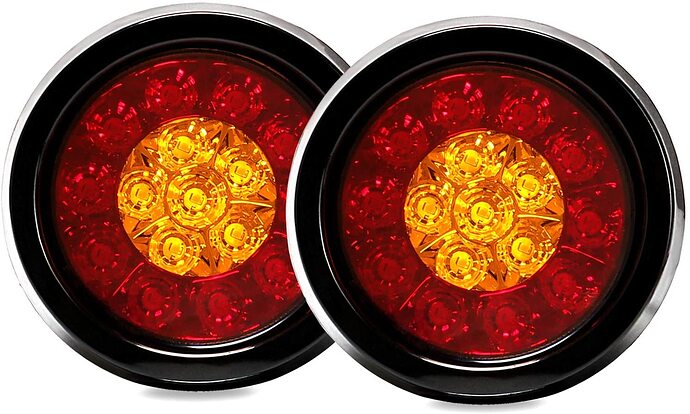 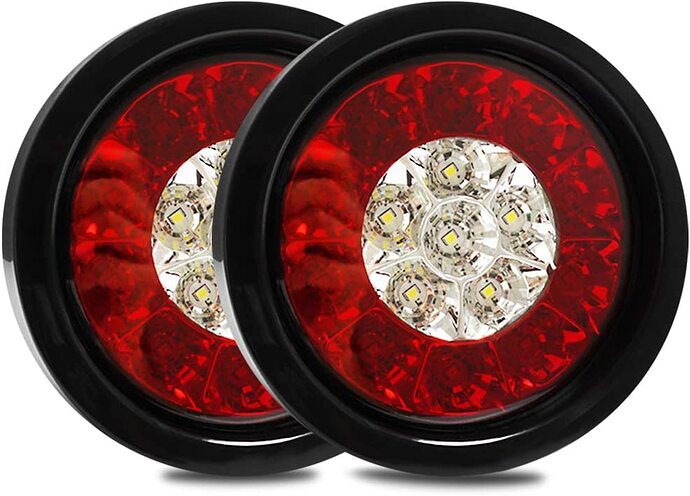 So the stock tail lights I’m using from vanilla game are really close to spot on.

You are correct, I am not currently using mods. A while back I was using some mods for things like rims, but I found that often after game updates the mods were flagged as incompatible and would no longer work so I gave up on using mods for the time being.

That being said, if trying to use vanilla game fixtures/constraints is going to be a problem, send me a list of the mods I would need to install and I will get them installed.

I am incredibly impressed by the response of the community here and your willingness to help me not only tune my car but also enhance it visually. Thank you all!

Oh, and regarding the picture you are hoping to find. I will try looking for that. I’ve never seen it but I’m interested to see it for myself.

grafting on '70s skyline taillights onto 280ZXs has certainly been done, I’ve seen pictures and it can look really good. However, putting S13 silvia (180SX/240SX) headlights onto a 280ZX would take A LOT of fabrication work as the two cars use completely different headlight systems. Still, if they managed to do it, that would be an interesting car to see. The Chapman strut is a design of independent rear suspension used for light cars, particularly sports and racing cars. It takes its name from, and is best known for its use by, Colin Chapman of Lotus. The characteristic feature of the Chapman strut is a long upright strut combining a coil spring and shock absorber, with a universal-jointed drive shaft itself forming the lower link of the suspension. The design's origin lies with William Stout's 1932 Stout Scarab. This rear-engined car used s...

Much appreciated. I think I’ll be able to do a lot without mods. About them becoming incompatible, welcome to automation I guess. If we think like that, all we do now is useless, as the next big update will make all the cars incompatible, on my side I’ll be losing the replica of my IRL car that took forever and a half to build. 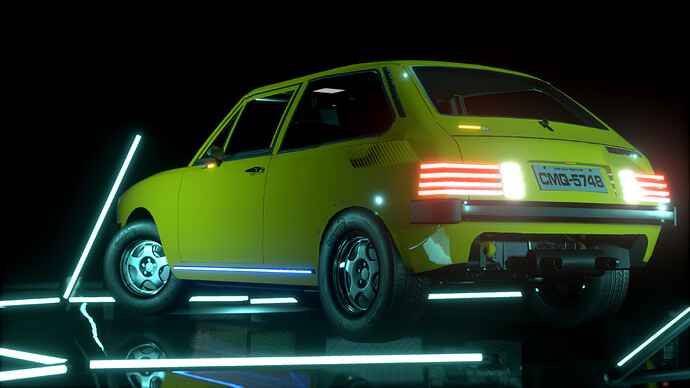 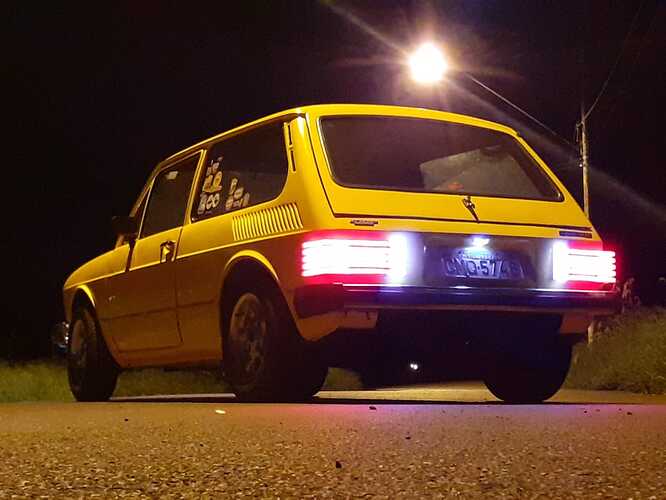 Also, it’s not my first (or second, or third) rodeo making the zeto. 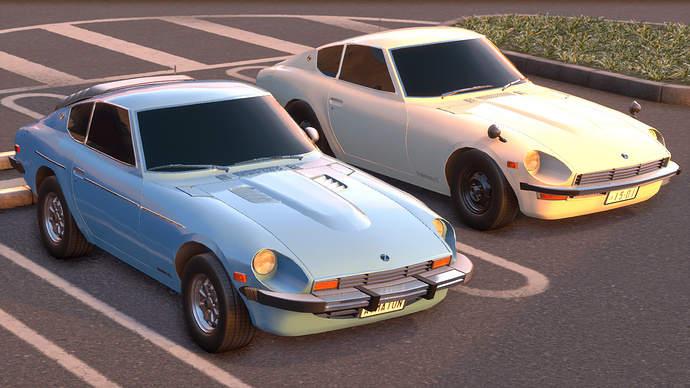 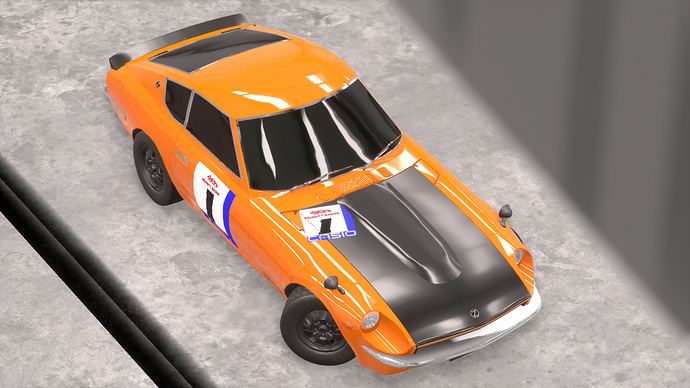 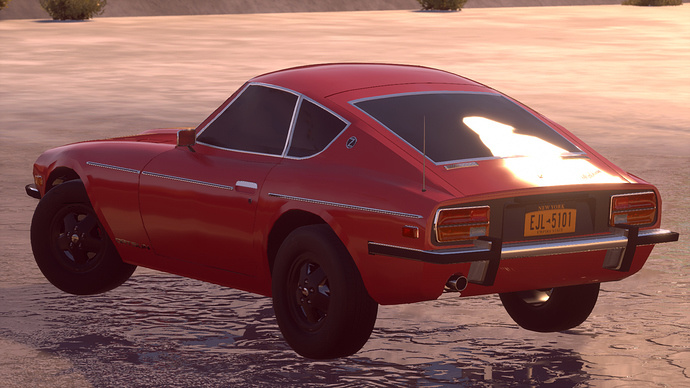 Those were made before the 3D update, so they could be better.

Yes, the 240/260/260Z cars (1970-1978) used a chapman strut design rear suspension, which is what gave the early z-cars such a great reputation as sports (handling) cars. Unfortunately when Datsun (Nissan) decided to design the 280ZX (1979-1983) they decided to change the rear suspension to trailing arm as the car was being ‘evolved’ from a sports car into a grand touring car.

Did some improvements with the limited time I have, the rest will be up to you. Pulled an old NFSU trick on the interior too, just delete it when you decide to add the full interior. I think it turned out pretty nice! 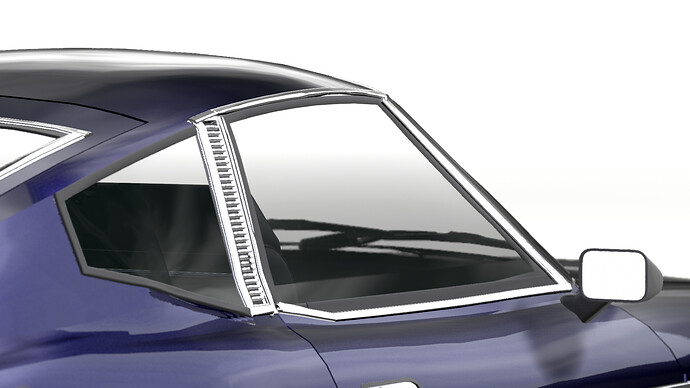 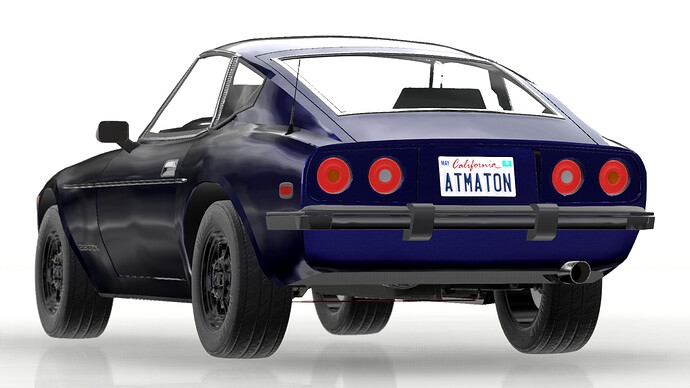 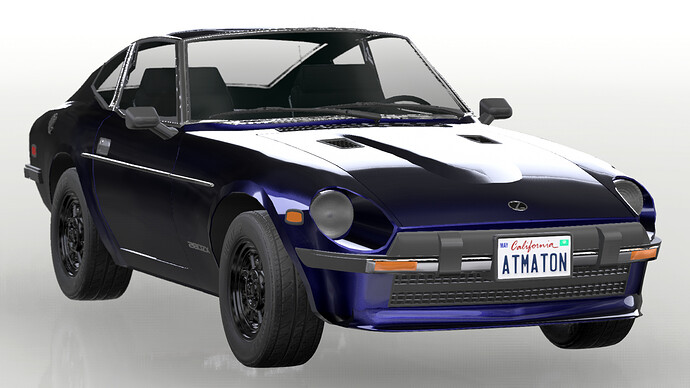 Reverse engeneer the heck out of it and learn as much as you can, that’s what I do when I receive a car .

That is a huge improvement over any of the styling I have managed so far! Looks great!

I will definitely be dissecting and reverse engineering your work to see how you did all that.

I had no idea you could make the windows clear so the interior was visible!

I’m trying to import your car file into my game and it looks like it needs some mod fixtures, can you tell me what mods I need to install for this car file?

I don’t remember using mods. Import it without mods and pm me some screenshots so I can see what’s missing.