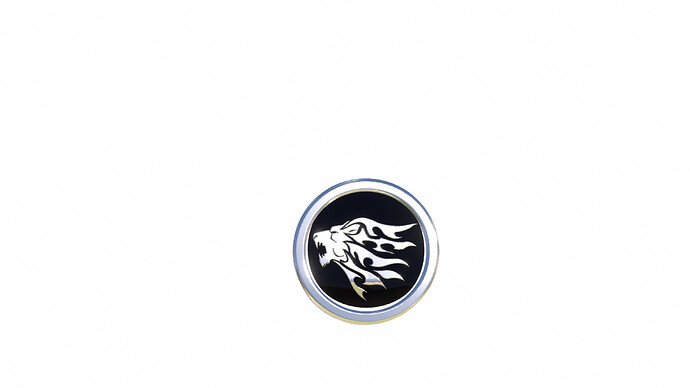 Courageux motors was founded in 1948 by Francois La Clayette in Lyon France.
After the local economy and industry was afffected by the German occupation of the area Francois wanted to mobilise the people of France with sturdy vehicles that also had flair and set the standard for European handling

The taillights on each model are quite small for the car’s body. Other than that, this is a great design.

I think you can’t make them larger without causing weird morphing. 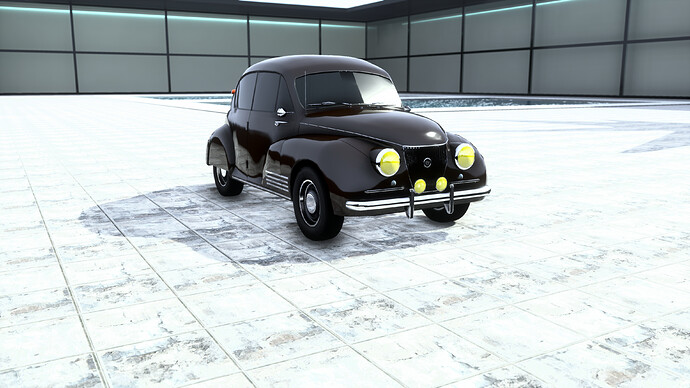 This was built using a modern monocoque construction. The suspension is a tried and tested combination of front wishbones and a leaf sprung live axle at the back. 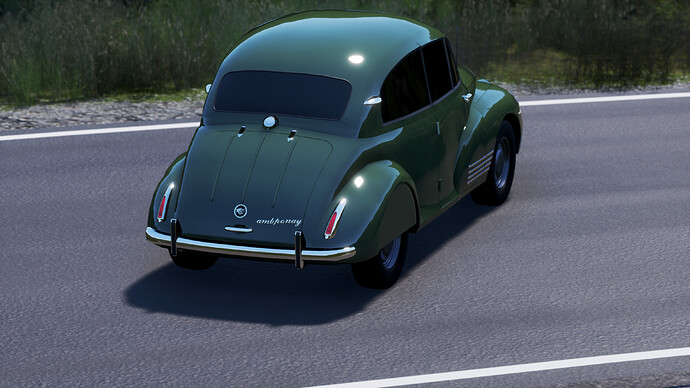 Courageux had to design and build their own engine from scratch, due to a general shortage and also the cost of raw materials a small iron cast 3 cylinder engine was built. This had a maxium size of 1203cc There were 3 models of Ambronay available, the basic "mobilisation" model, with a standard 4 seat interior, steel wheels and some chrome trim. An am radio was an option. The 998c engine was the powerplant in this model 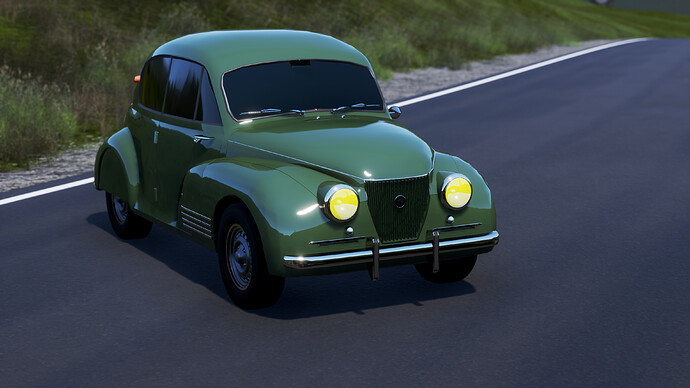 HiResPhoto3473840×2160 1.3 MB
the upmarket "luxe" model that added a nicer interior, a standard am radio, chrome hubcaps and front grille, with some chrome stripping on the sides and also twin front driving lamps. The luxe was powered by the 1203cc variant of the engine 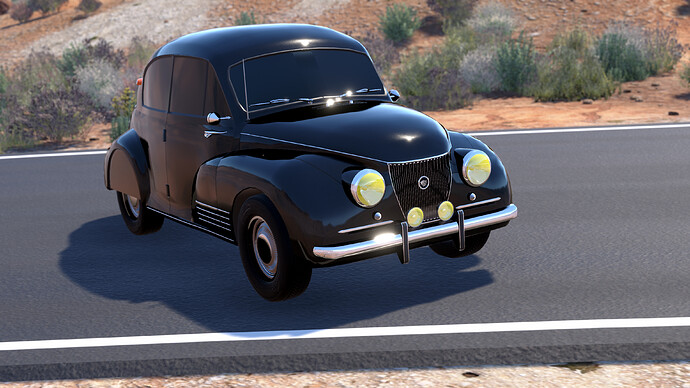 The Decapotable model had the specifications of the “mobilisation” with the 1203cc engine from the “luxe” model making it the more sporty of the range. A luxe model could be special ordered if required. 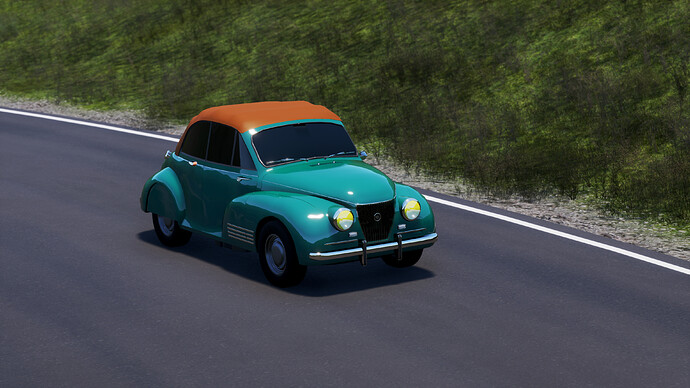 The Ambronay was a reasonably good selling car in it’s first year of production however the obvious limitations of it’s size couldn’t be hidden. With only a 2 door sedan or 2 door cabriolet available sales were needed in larger family, premium and utility segments. Work on a larger and more capable model to sell alongside the Ambronay was started just before the Ambronay was launched.

The designers main 3 objectives in the design brief were

A body on frame construction was considered for ease of re-bodying different models however the factory had invested a lot into monocoque techniques so this was kept on for the new larger car. Double wishbone front suspension and a live axle rear was also used as the car kept some of the same suspension and engine mountings from the Ambronay.

The engine was the new inline 6, this was created by using a lot of components from the “trois moteurs” engine and kept the same cylinder dimensions and basic construction. 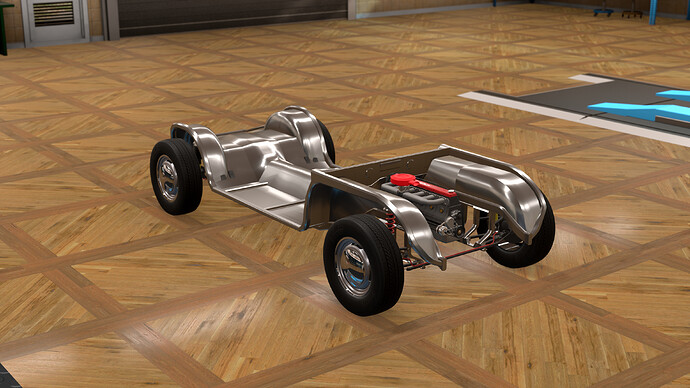 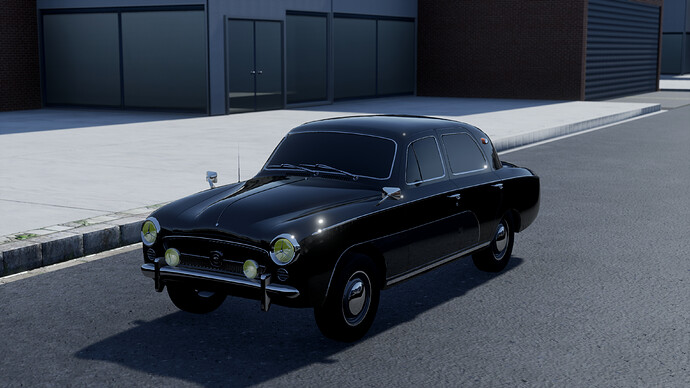 The standard model of the car was the Croisière berline populaire 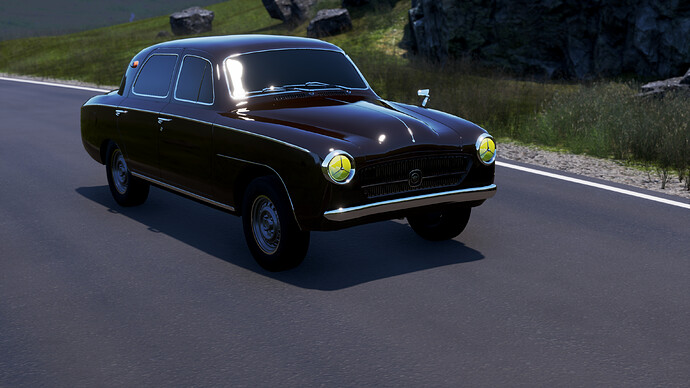 HiResPhoto4053840×2160 1.69 MB
This was powered by a 2.0 inline 6 with a 4 speed gearbox. Equipment level was a standard 5 seat interior, steel wheels with chrome trims. Front and rear lap belts and safety glass is standard across all models.

The upper trim level was the berline luxe 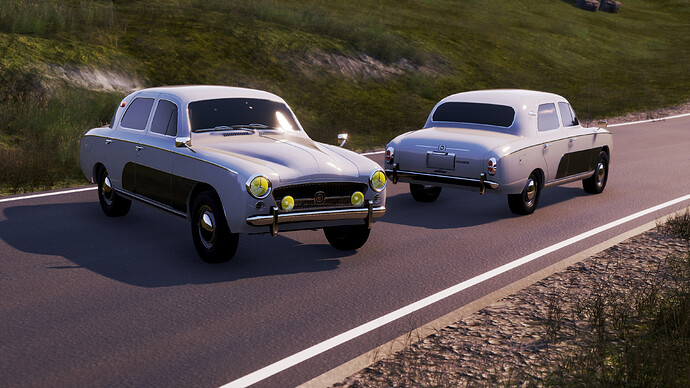 HiResPhoto4043840×2160 2.52 MB
This has a more premium 5 seat interior with leather seat facings and wood dashboard trim. A high quality AM radio is also included on this trim level. The exterior has both driver and passenger wing mirrors, a two tone paint finish with chrome edging. The bumpers have over riders fitted and the fuel door is fitted with a lock. Wider wheels are standard on the luxe with chrome hub covers

Both models were also avalable as a Voyageur estate variant.

shown below is the Croisière Voyageur Luxe 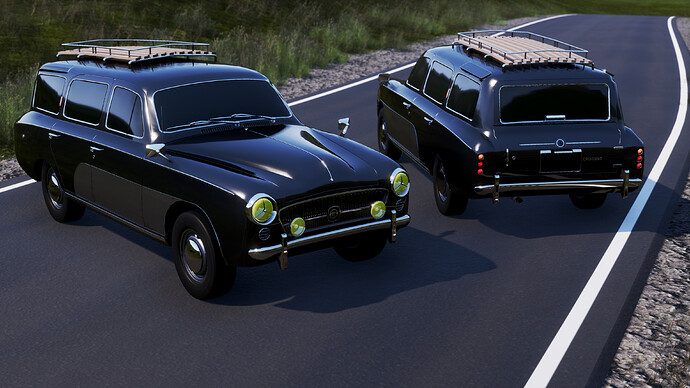 The voyageur models included fold out rear seats in the boot area, extra windows in the roof for extra visibilty and a roof rack as an extra. The tailgate was an interesting design whereby the top section folded up and the lower section opened like a door

A pickup variant was added to the range in 1955. 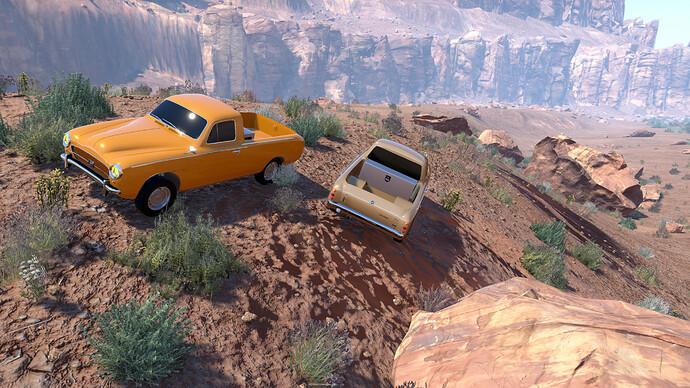 This was not the full utility vehicle some had been hoping for as it was based on the Voyageur floorpan, it did however give the ability to carry large sized loads such as hay bales. A rail was fitted along the side of the bed to tie down loads or a canvas cover. The engine was the 2.0 inline 6 but tuned differently for torque at lower levels and increased fuel economy, a variant able to run on lower quality 85 RON fuel was also available in certain markets.

1955 also brought in a few small changes to the range, the trafficators were replaced by front indicators below the headlights. The Luxe model also gained a heated rear screen and more comfortable springs 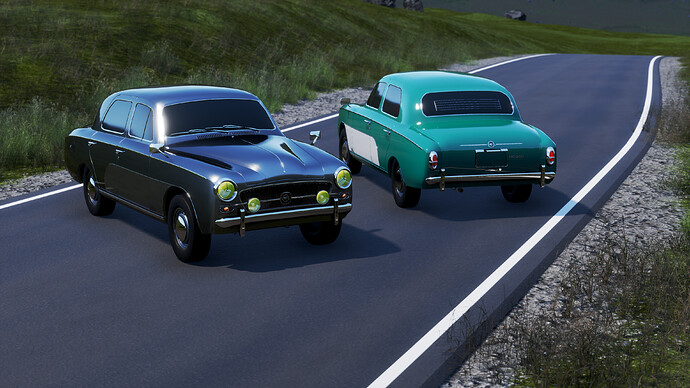 The largest change was the introduction of a 2 speed automatic gearbox on the luxe automatique, this model can be identified by the small vents behind the front indicators and the badging to the rear

The 1960 facelift of the car was a simplified design overall with the grille replaced with a simpler 3 bar design, the front indicators replaced with rectangle units containing parking lights. The rear lights were also replaced with simpler glass rectangle pieces. The mirrors were placed in the doors instead of the wings and all models got twin mirrors. Two tone paints were gone from the range, with a chrome stripe replacing the previous design. 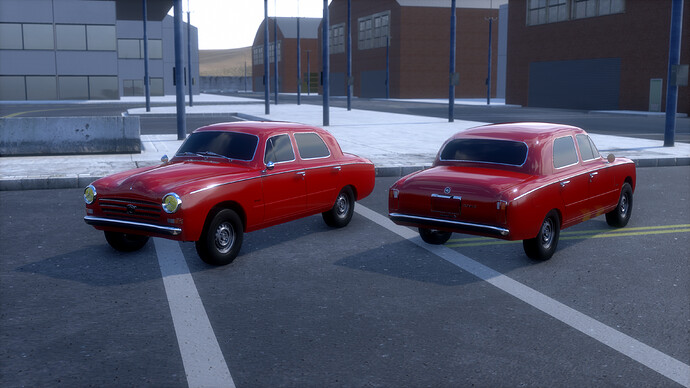 The shown car was a new model to replace the “populaire”, called the “berline de base” this was not available as a voyageur. The 2.0 engine was replaced with a new 1.5 4 cylinder with improved fuel economy.

placeholder for Courageux Ambronay B

To better compete in the valuable american market, and also in the large premium sector in Europe a full size car was developed using the Croisiere as a base. Using much of the same running gear the “l’americain” was developed and launched in 1957.

The standard variant was the 2000 berline, with a 2.0 inline 6 engine.
Even for the base variant the car is well equipped with leather seats, wood grain dash and door tops and a single speaker am radio.
The exterior was modelled after 50’s american cars with a liberal amount of chrome on most exterior trim.
A 4 speed manual gearbox was standard equipment, along with drums brakes all round, power steering and comfort springs. 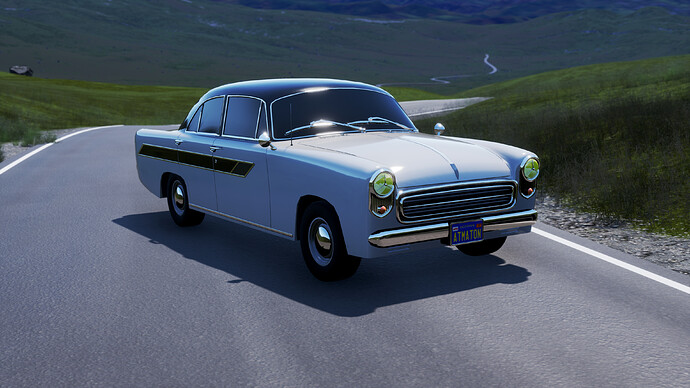 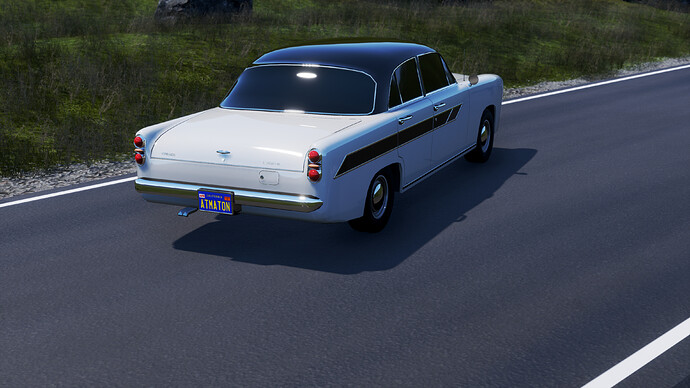 The berline 2400 was the upmarket sedan model. Powered by a 2.4 inline 6 engine. A 2 speed automatic was optional at this level
The interior had more luxurious seats with higher quality leather. A wooden steering wheel and gear change was included. A better two speaker am radio was also standard equipment.
The exterior added white wall tyres, bumper over riders and driving lamps set into the grille. The grille design was also a slightly more chrome design. 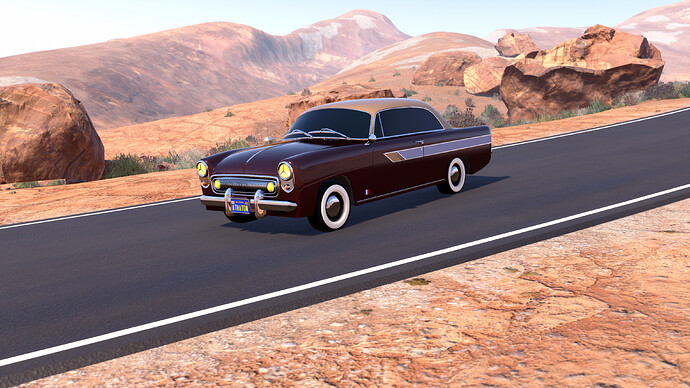 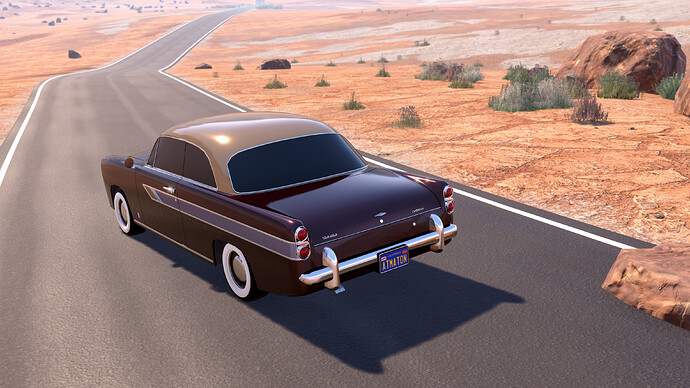 An estate model was also available along with the berline and coupe models. Mechanically these were the same as the sedan models except they have a leaf sprung rear suspension for better load carrying. They also have a fold out 3rd row with 2 seats. The only engine available was the 2.4 inline 6. 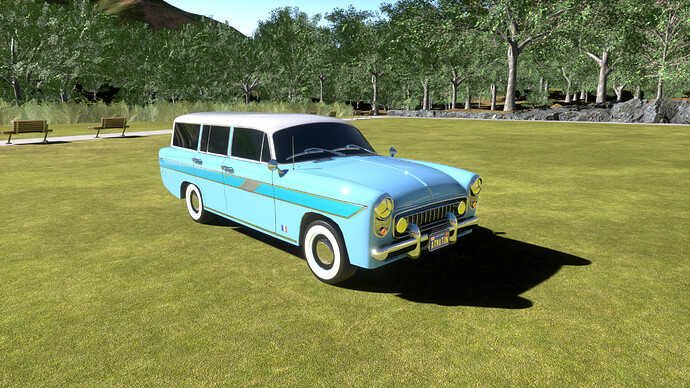 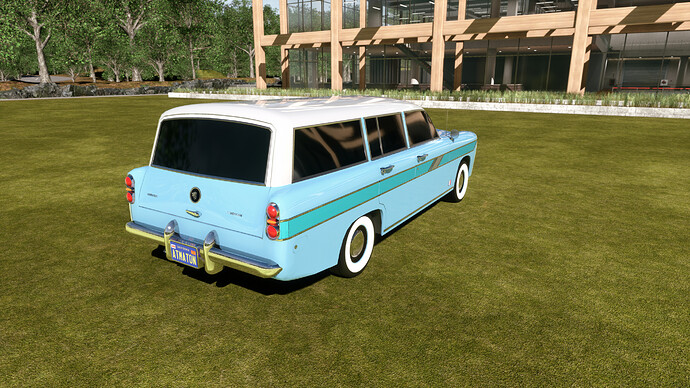 The range was facelifted lightly in 1959. The front grille was changed to a wider design with the driving lamps integrated into the sides. The indicators were moved to the top of the wheel arches. Mirrors were now on the front doors. Th bumper over riders now had a more contemporary round design. At the rear a continental spare tyre was an option built into the body.
A 3 speed auto was now an option instead of the previous 2 speed. 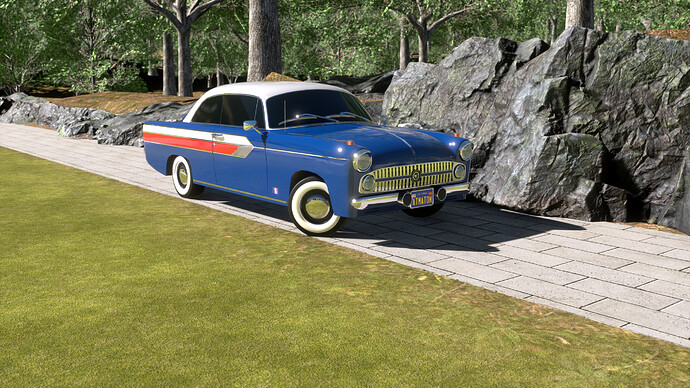 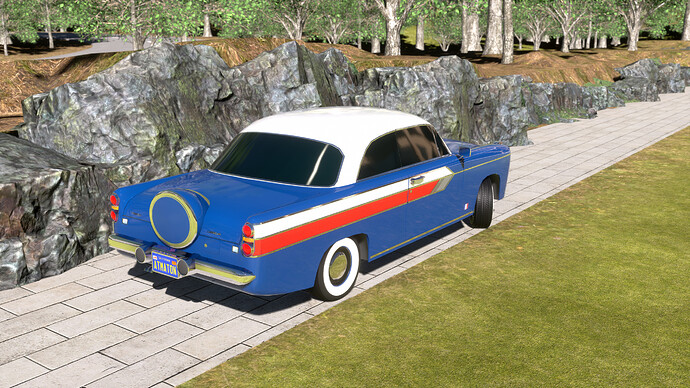 HiResPhoto4262715×1527 2.15 MB
A sports pack was an option that added twin carbs and a tubular sports exhaust to the car. along with power front disc brakes.

The Voyaguer estate models were facelifted the same as the sedans. The roof was offered in two tone paint with a roof rack in the secondary paint area. 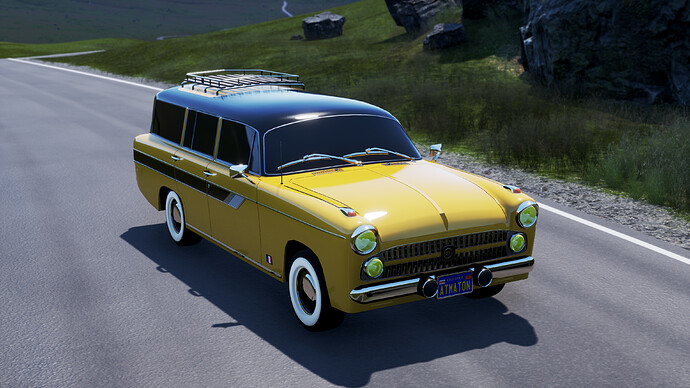 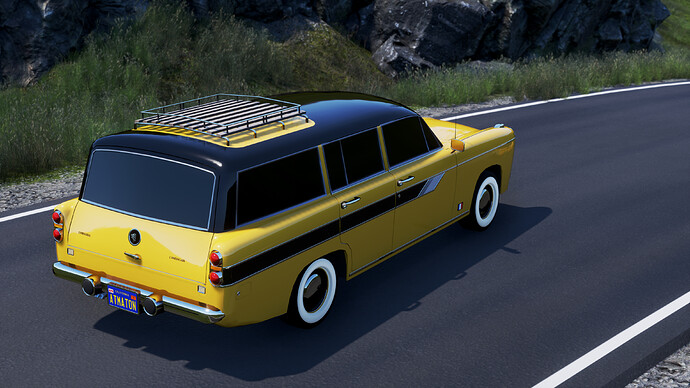