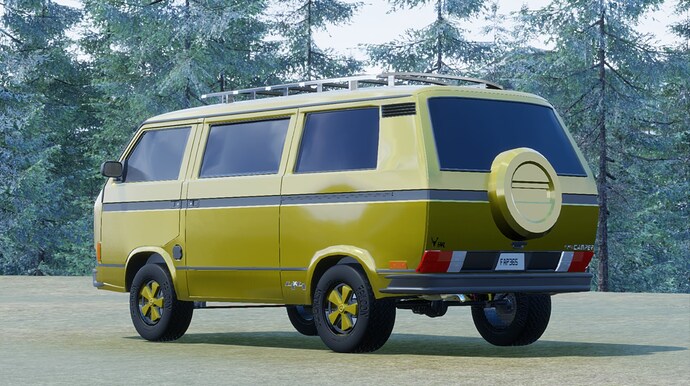 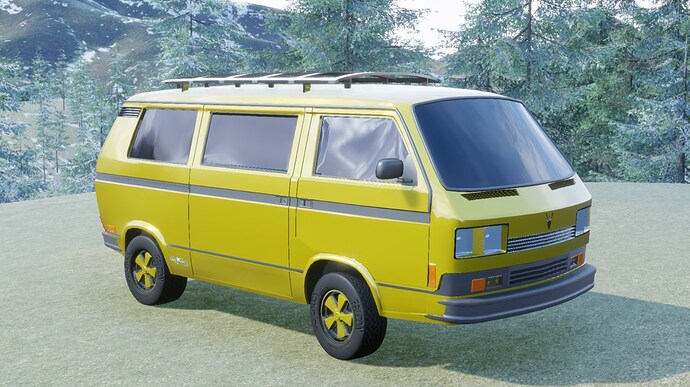 The FAAL Ochlosia and Ochlosia Camper have both been on sale for ten years now. At the time, the top of the line engine was a 2.2L carburated 236S engine making 101hp. Over the years, the versatile van thingy went through a facelit and several engine changes, notably gaining fuel injection in the process, and many new options, like:
-a 4x4 system, that had nothing to do with FAAL’s famous TETRA™ AWD system (spoiler alert) but rather, was manufactured by a third party
-an optional roof rack
-thicker bumpers on the Gasmean version to satisfy some weird pedestrian safety rule or something

In a decade, the van gained a reputation of being the best use of 4.71m ever manufactured. It being capable of both carrying AND towing more than its own dry weight using only a 1.8L engine in the base version was proof enough. Not to mention, SO MUCH ROOM.

This, however, is the civilian version. Just to drive the point of the FAAL Ochlosia being the most versatile vehicle out there, allow me to present you that project we presented to the French army a few years back… before they scrapped it because they wanted to keep using those ancient Peugeot badged Mercedes G wagens “for another century or two” (sic) 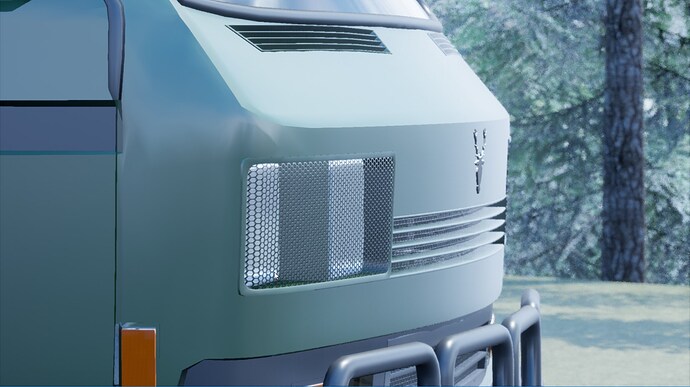 The FAAL C1900 is a toughened up version of the long lasting Gasmean spec Camper. All the important lights are protected, either by mesh like the headlights or small bullbars for the taillights or front blinkers/foglight combo 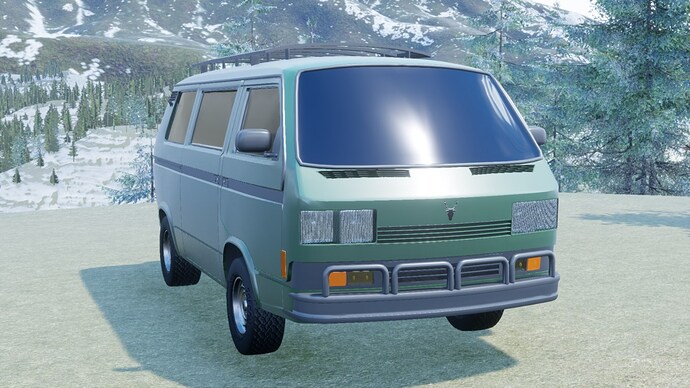 All the factory options for extra transportation capabilities are included, like the custom roof rack and the trunk mounted spare wheel. Not to mention, of course, the mechanically engageable 4WD system with lockable diffs all around 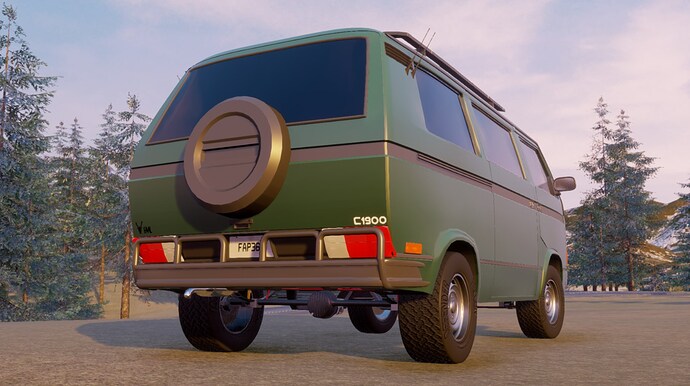 You will also notice fatter tires all around, especially on the rear where the width has been increased compared to the front tires, which allows the C1900 to carry, as the name suggests, a little less than 1900kg, while towing 1600kg. The van itself weighs about 1400kg, pretty light for a car that can haul that much. 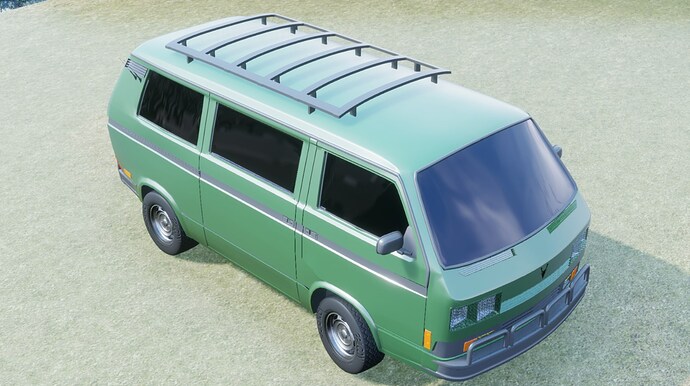 The front cabin comes with two seats, the engine being in the middle. The cargo area? 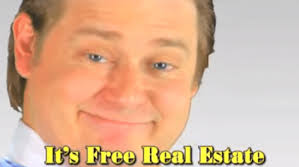 … I mean, technically, you could do whatever you want with it, bench seats, medical cabinet, kitchen, whatever, in a decade, you name it, it’s been done. But this demonstration version comes with a bench seat with space for three, the rest of the cargo area remaining open for equipment.

NOW, the main advantage of this vehicle is its engine. The even longer lasting 236S23. A 2.3L direct acting SOHC inline 6 that had been in production since 1965 and has seen numerous FAAL models, from cars to vans. It had even been turbocharged in two different versions and has seen everything from leaded fuel and carbuators to mechanical fuel injection to multipoint EFI. Not to mention, do you know what twenty one years of production does to reliability? That’s right fellas.

The variant in this particular model is naturally aspirated and produces 100hp which are delivered to the 4WD system with a 4 speed gearbox with a very short first gear that almost acts as a crawler… And it can run on virtually anything, including:

You get the point. Of course, that and the gearing makes it drink about as much fuel as the early carburated version despite the improvements in fuel feeding: 16.5l/100 (14.3 MPG US). Compromises, I guess.

As for the price? Anything is negociable from 10500$ w/o markups, and you get to free Dalluha with the best use of 4.71m ever manufactured, that still looks like the jovial multi-purpose vehicle that it is!

Damn those FAAL guys… We haven’t finished our design yet, but already they do much better than the SARA ever hoped to do…

The guys at the FAAL Plant all gasp in fear.

One of them even stops eating his Fleischnacka entirely.

You hear the sound of a pint shattering on the floor 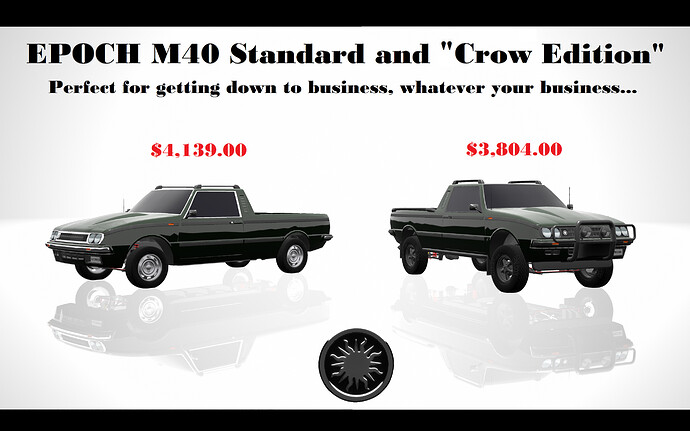 We can neither confirm nor deny compatibility with MIL-STD-1394. 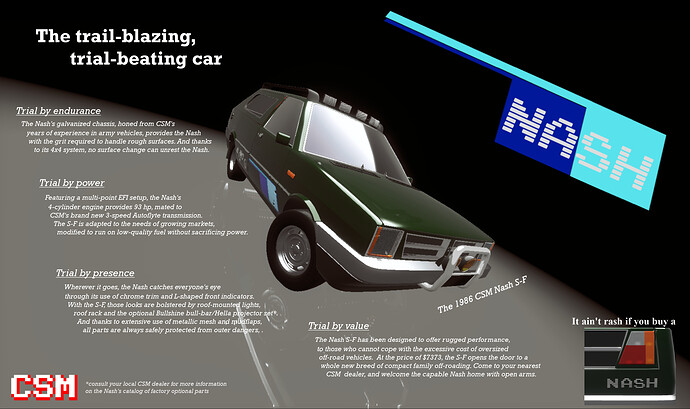 Price shown in Automation dollars, consult your local dictatorsh… er, I mean fair government for more details in other currencies.

It’s been a while, yes. But between personal projects and the Griffonne debacle, I felt my head wasn’t in place to enjoy Automation. Let’s see if this once I can get more than a laugh over the name and immediate binning afterwards… 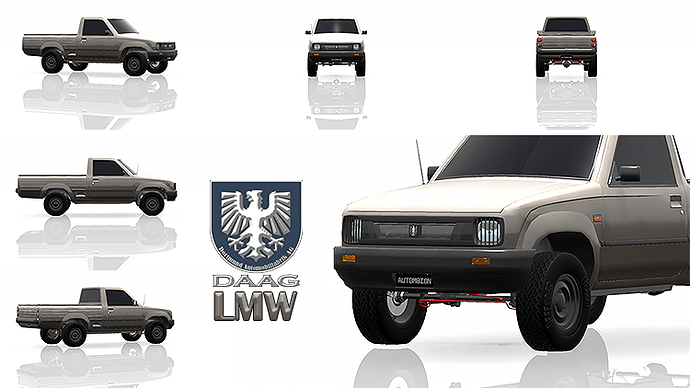 Jim Franks came into the office early, energised on the success of the previous day. To his suprise, Domingo was already there. “Morning, boss!” Domingo exclaimed. “We just got the offical word down from HQ, our operation has been codenamed PUBCRAWL, and is now on a need-to-know basis only.”

“How need to know are we talking?” Jim asked.

“I could tell you, but then I’d have to kill you…” Domingo said wryly.

“Yeah boss. I just finished the dispatch too…”

“Good call with the low-level cipher, Dom - makes it look less important to anyone who’s listening.” Jim said. “What are we getting for responses from our partners?”

“We got a few so far, the proposals are on your desk for you to review.” Dom said, taking a sip of coffee.

“Alright, I’ll be in the office if you need me.” With that, Jim closed the door to his office and took his jacket off. No sooner than he sat down than his phone rang.

“Franks…” Jim said as he answered the phone.

“James Franks…” the voice began, “my name is Colonel Olaf South, and I have a proposition for you, with regard to PUBCRAWL…”

Well, good that I know at least some decoding practices. Always used to like puzzles.

I don’t think I’ll compete because of lack of time, but here’s some hints from an export control lawyer (albeit in dual use items / EAR):

While the US ITAR is more strict on what a military vehicle is, any export or import control based on the common EU Military List, will control a broad spectrum of items:

The most useful control notes for this challenge might be the following (from EU ML.6.):

Note 2: Modification of a ground vehicle for military use specified by ML6.a. entails a structural, electrical or mechanical change involving one or more components that are specially designed for military use. Such components include:

Note 3: ML6 does not apply to civil vehicles designed or modified for transporting money or valuables.

We’ve heard from SDECE backchannels that Gasmea is plotting a coup against Archana.
The President is quite unhappy with Hussai’s ungratefulness towards France, we cannot let Gasmea get a foothold in our own backyard.
Nor can we let the Gasmean know we’re working on sabotaging their coup.

They plan to use offroad LUV that they would then give to the DLF, a group of right-wing agitators they already heavily support.

We can expose Gasmea and their main asset there, Gajos, but we need an entry point four our SDECE support forces.

For that, we need you to make a strong offer to the tender the GCID will issue.

Our analysts tell us the focus should be on reliability, fuel economy, and offroading, so the Varappe in Coloniale Emergence trim might be a good basis.

Be careful - the FAAL is rumored to have a strong contender for this tender, and you know as well as I do that ever since they lost the bid for the Army LUV they aren’t much willing to collaborate with government. I will do my best to undermine their proposal, but you have to present something strong so that I don’t look like an idiot.

PS : my wife asks when you can join us for dinner at home ?

We heard about that tender and had already started working on it - as you know, Archana is SARA backyard too, and we couldn’t let those alsacians win there.
We’ll amp up the studies, but know we have already an extremely capable version of the Varappe ready for preliminary tests. We’re looking on improving reliability around the board, but we’re very confident with economy on low quality fuel, and offroading capacities well in the 70s

As for your PS, we just got a vintage Corton Charlemagne, would you care tasting it with us friday in eight ? I’m sure it would be a great fit for your Suzanne’s Bourguignon 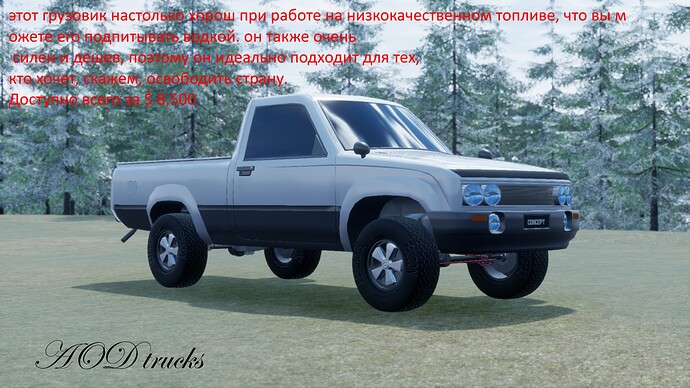 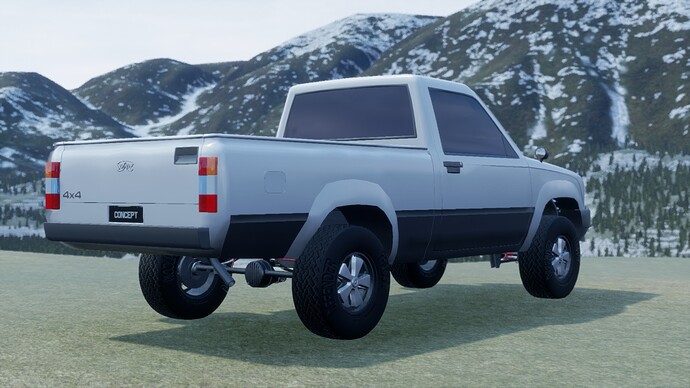 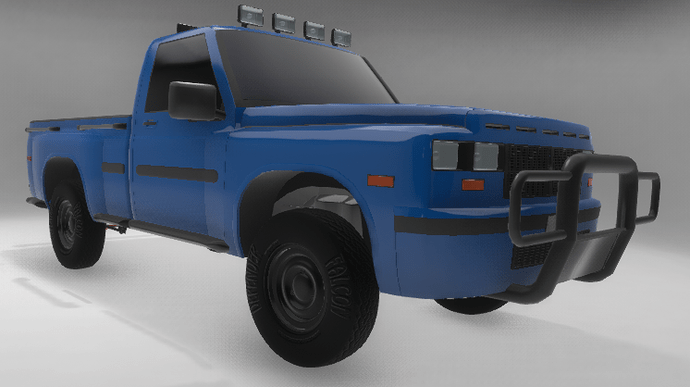 Developed from the Bogliq USA Fruinia to Dalluha racing program, the Cargostar Nomad is a tough, no compromise, work truck that isn’t afraid of hard work or rough terrain.

Need to carry a lot of heavy stuff? The Nomad can carry a full two tonnes of whatever you have to haul.

Need to tow a heavy load? The Nomad can tow a two tonne payload without breaking a sweat.

Need to drive over plants and birds and rocks and things? The Nomad is a heavy-duty 4x4 that can go anywhere, anytime.

Don’t have access to quality refined fuel? The Nomad runs on any flammable liquid rated at 80RON equivalent.

And the price? Shipped, landed and ready to deliver anywhere in Archana, a Nomad will cost you only $4,785 (1986 US Dollars) Driveaway and servicing won’t hurt your pocket either, costing $229 (1986 US Dollars) for a full year of operation!

Visit your local Archanan Bogliq dealer today, or, if you need more than one Nomad, contact our Archana Wholesale Depot directly to arrange shipment wherever in Archana you need them. 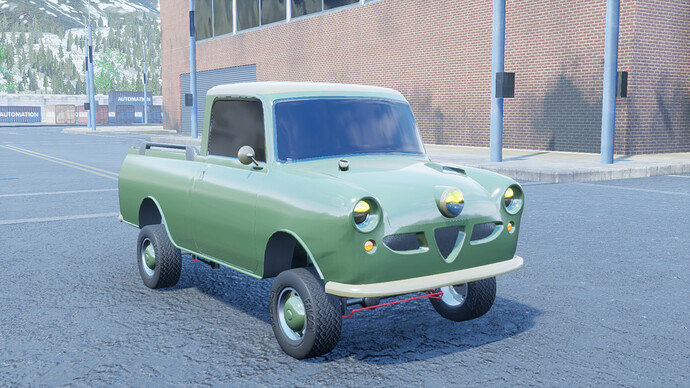 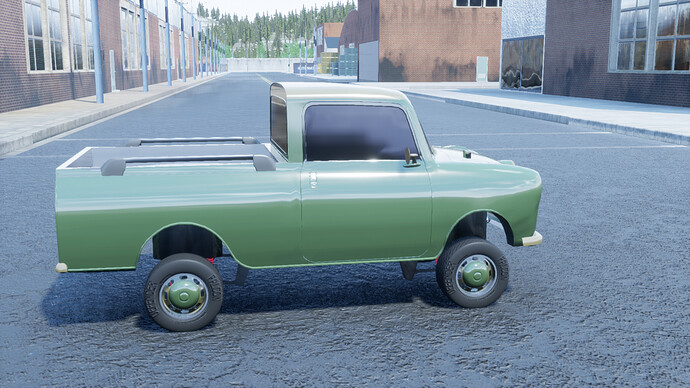 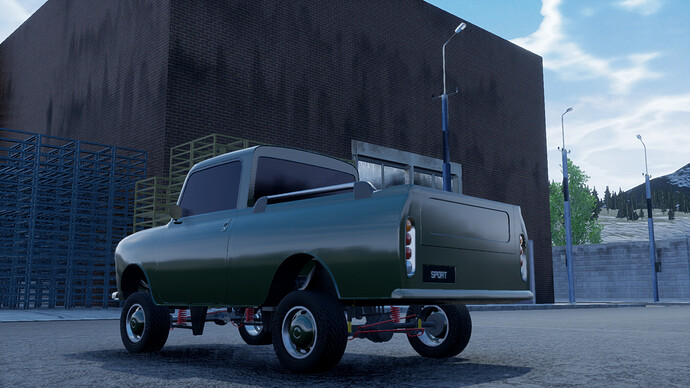 Is it a race truck, or a revolution?

Lagerfelter Performance Engineering presents the Issigonis. Originally developed as a spec class in conjunction with SCORE and a certain off-road console racing game, the series featured 12 qualifying stadium races and culminated in a 100 mile section of the Baja desert race. The initial entrants all qualified via an online console championship, many had never driven a real race car. 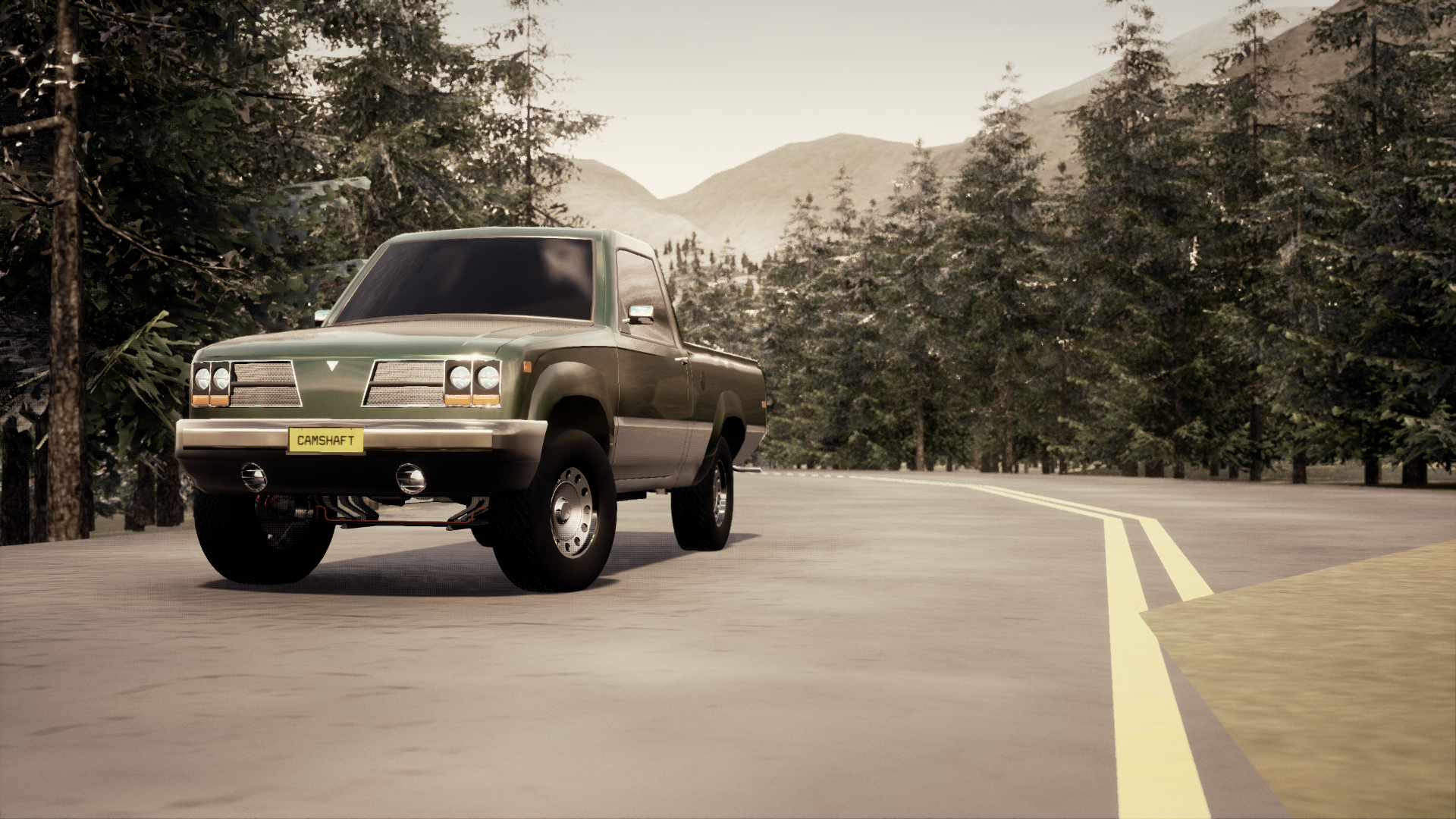 Great for roads overrun with grass! 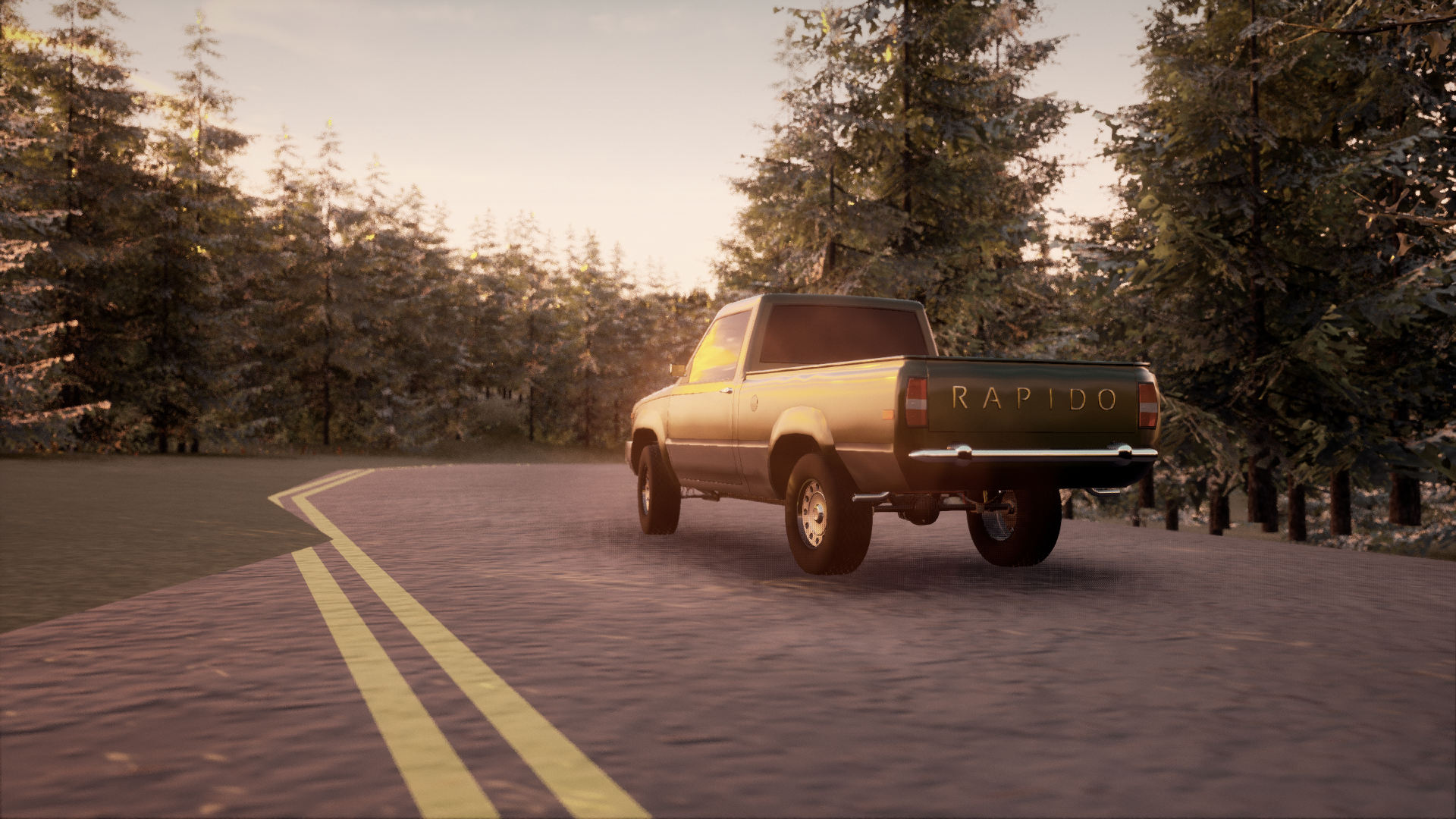 Rapido Motors, rapidly getting you from point A to point B.

plants and birds and rocks and things

Was I supposed to sing that bit? 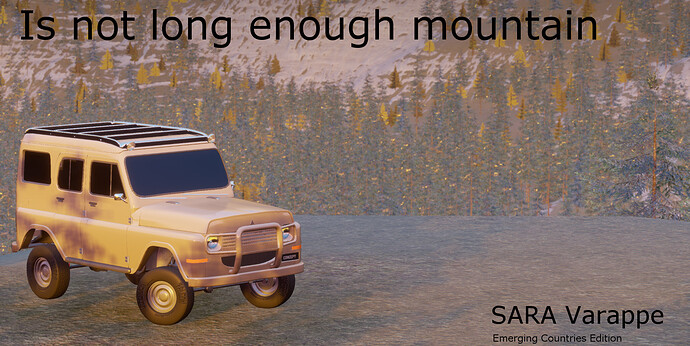 SARA%20Varappe1728×867 927 KB
Thanks to @BoostandEthanol pre-empting my tagline, I had to mash it a bit to avoid plagiary charges - and no one ever said frenchmen were able to speak english correctly, anyway !

SARA Varappe - the world is your crustacean

Since 1960, the SARA Varappe turns these impediments into mere anecdotes in your trips.
Wherever a Land Raver stops, the journey starts, with a smile, for the Varappe.

You’ve seen its iconic fascia all over the globe, on every surface the good mother Earth offers.

The (somewhat) new, '86 “Emerging Countries” edition is the offroader that offers the most, for the lesser check.

(*) I had to refrain from the booze jokes, @Knightophonix was the first on these…

Crusader is the little brother of the luxury pickup Vulcan.
Unlike the luxor, Crusader is a budget pickup and the LQF model comes with slots in the doors for armor panels, engine that can use low quality fuel and a sunroof, that can be used in many ways like watching the sky or mounting a LMG to it.

The Revero DLF: For your utility and offroad needs 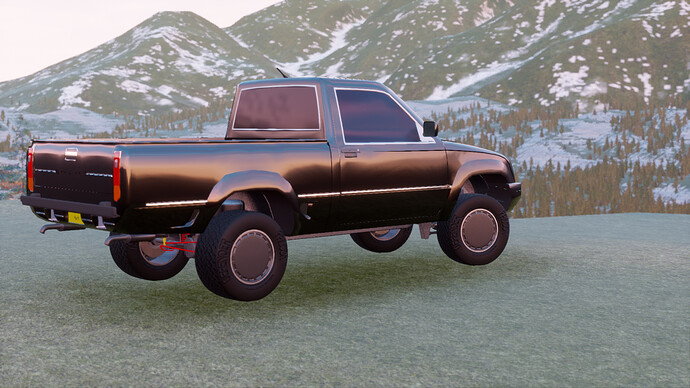 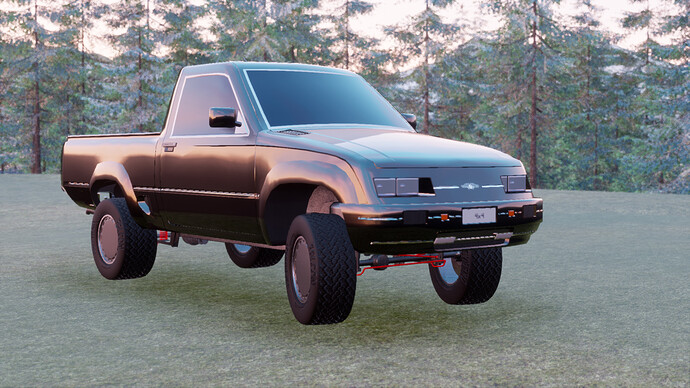 HighresScreenshot000821920×1080 1.06 MB
This Revero DLF is a car that was made with the army and the people in mind, and at only 11000$ (0% markup) it makes sense as a sensible choice. With an 80RON, relatively fuel sipping I4, it is good for long runs where you need to run on one tank, and when you only have access to the mildly spiced water that’s called fuel in some regions. And with 60+ as the offroad score it won’t get bogged down either. It is also reliable enough to spend a lot of time on the field without major issues and looks sturdy enough to be a military vehicle but generic enough so that the average Joe would have no clue what it really is.
7 Likes
← previous page next page →