“Thank you all for attending this special intelligence briefing, ladies and gentlemen, but we have a developing situation in Archana where we might be able to further our interests,” Kelly Aguilar, the deputy director of the GCID stated. “For those of you who don’t know, this is James Franks, our senior analyst at the Archana desk. Jim, the floor is yours.”

Jim shuffled his papers and made his way to the dias at the front of the auditorium. This was Jim’s first senior intelligence briefing, and he was feeling the heat, even in the cool air of the room. “Thank you, deputy director Aguilar. I will to keep this as brief as possible for you all. Lights please!” The lights dimmed in the auditorium and the slide projector flickered to life. “Ladies and gentlemen, the following briefing is classified as SCI/TS; anyone without adequate clearance, please leave the room and remove your personal belongings.” A few people stood up and filed out of the auditorium quietly, and after a moment, a green light illuminated on the back wall, indicating it was safe to continue.

“As you all know, the death of Premier Elpidio Hussai - the leader of the Progress Party of Archana, and the only head of government the country has had since its unification in 1946 - died suddenly three months ago, without a plan of succession in place. This has left an enormous power vacuum in his absence, and a number of factions have emerged within the Progress Party, each of them vying for control of the Archanan government and its various ministries. Next slide please.”

“Adding to the already unstable situation, the prefect of the Dalluha region, on the northeast coast of Archana, appears to be making a move to unilaterally declare the region’s independence from Archana. For those of you who don’t know, Dalluha is culturally and linguistically distinct from Archana, and has chafed under the brutal and autocratic rule of the Hussai government for years, existing in a state of nearly perpetual civil unrest. Next slide please.”

Jim continued his briefing; “Last month, our asset in Dalluha, Major General Sayyar Gajos, the head of the Dalluha Military District and a native Dalluhan himself, was forced out of his position by the Progress Party two months ago in an apparent purge perceived threats to the Party. He has since re-emerged on our radar, having made contact with us last week in a remote area of the country, where he is working with a number of his loyal officers to establish a paramilitary force to force the Archanan government out from the region. While he cannot overtly support this so-called Dalluhan Liberation Front, the local prefect has indicated he would not stand in the way of such a group. It is our estimation that with a level of clandestine logistical and material support for the DLF, they would stand a very good chance of success against the Archanan People’s Army.”

“James, this is Director Knight; a question, if I may? What kind of material support are we talking about here?” Director Sandra Knight, the head of the GCID asked, sitting in the front row.

“Ma’am, it is our estimation that the largest need for the DLF is mobility; they need a large number of light, commercially-available motor vehicles, such as pickup trucks and utility vehicles, to be able to succeed in their endeavour.” Jim stated. “They are cheap, readily available, they can be converted to technicals if needed, and they would not arouse the suspicion of Archanan customs officials if inspected at a port of entry.”

“Technicals?” a voice in the back asks.

“Technicals - basically, a light motor vehicle outfitted with modern light weapons such as anti-tank missiles, rocket launchers or recoiless rifles, that can transport a squad of soldiers into and out of action quickly, and can engage in hit-and-run attacks on larger targets if need be.” Jim replied, starting to find his feet a little bit.

“Forgive me for asking, Jim,” Director Knight asked, “but how would a gaggle of rebels in pickup trucks with machine guns strapped to the back be able to compete with the largest army in the world?”

“Good question,” Jim answered, “While the Archanan People’s Army is the largest in the world, it is generally very poorly equipped and trained, outside of the elite units in the capital region. Additionally, most of their units are more under the control of the Party’s political officers rather than the military commanders, so morale and initiative are very low on a whole. WIth a few losses, it’s very likely that large numbers of army units will desert or even switch sides in a potential conflict.”

“Has Gajos indicated how many vehicles he needs?” Deputy Director Aguilar asks, puffing on a cigarette, its ember glowing bright in the darkened room.

“As many as we can afford him; thousands, or tens of thousands possibly.” Jim replied, wincing a little bit.

“How on earth are we going to get that many vehicles into the country?” Director Knight asked, a little incredulously.

“We’ve given that some thought, ma’am,” Jim replied, a faint smile washing across his face, “In spite of their issues, Archana has been undergoing a strong economic boom lately, and a number of motor vehicle manufacturers have set up distribution networks in the country. We think they would be willing to help us to import these vehicles into the country, which the DLF will purchase through a series of fences, funded by us.”

Director Knight sat back in her chair, her eyes narrowing as she thought about the proposal. “Very well; I will authorise the maximum amount of money our of our discretionary fund for this; understand that even one dollar more than the $50 million I can authorise will necessitate a public hearing in front of the Parliamentary Intelligence Committee.”

“Yes ma’am, I understand, and thank you!” Jim replied, feeling a wave of relief wash over him. “If there are no further questions, that concludes my briefing.” Jim gathered his papers and went to re-take his seat.

“Jim?” Director Knight called out, as he was halfway between sitting and standing.

“Of course, ma’am!” Jim stood back up and shuffled out of the meeting, heading back to his office.

“mornin’, J!” Domingo Suarez, Jim’s best junior analyst, was sitting on the corner of his desk, sleeves rolled up, reading a file. “How’d the briefing go?”

“We got authorised for fifty mil,” Jim replied as he sat down behind his desk, fishing for a pack of cigarettes in a drawer. “Anything from Gajos’ drop yesterday?”

“Yeah, man, some bad news; the Archanan government completely cut off supplies of diesel fuel the day before yesterday, and has begun severely rationing gasoline in the whole damned region!” Suarez replied.

Jim sighed; “So…no fuel then. So much for this plan to mobilise the DLF.”

“Maybe not, boss…” Suarez continued, “they’re still allowing cooking fuel into the region. I was talking to someone down in Tech, and they said that if it’s mixed 50:50 with the existing gasoline they sell there, it’s not far off the regular we sell here. And if it’s run straight, well, it can work in a pinch, but it’s low-quality…real shit fuel.”

Jim took a pensive drag on his cigarette. “Alright, let’s put some feelers out to the companies that work in Archana, draw up a spec and see what they can come up with…”

Vehicles for CSR 73 will be judged by the following criteria:

Click here if you are unsure how much time remains until the deadline!

Hmm… Cheap military agricultural trucks able to run on poor quality fuels… I may have a few ideas in mind for this.

Finally, a challenge where the SARA “quasi diesel” and low octane engines can shine !

Gonna be a challenge for me, since I basically specialise in light sports cars. The PU/ET limits are pretty challenging, so should be pretty fun to try and work with them! 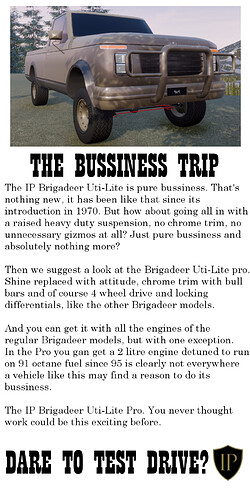 1986 IP Brigadeer Uti-Lite Pro. It was good enough to be the official team truck of our anti-hero Mats Hansen and his family in the 24h clunker run, let’s see if it might be good enough for this task then, too?

Oh great, more trucks… But this time it’s in a newer era, and at least you’ve given us some backstory on how Dalluha gained independence from Archana! Anyway, I guess I’ll need to think long and hard about my entry before sending it.

Edit: Seems like this round’s not limited to trucks after all, but I feel like submitting one anyway…

You was inspired by name of my pick-ups?

No, I had the vehicle in my lore before I know about the Ferrains at all.

Ah ok.
My brand is real but it only sells vehicles in robocraft but it started so.
I must wait for other competitions when year is minimum 1998 because i can’t broke chronology of brand. 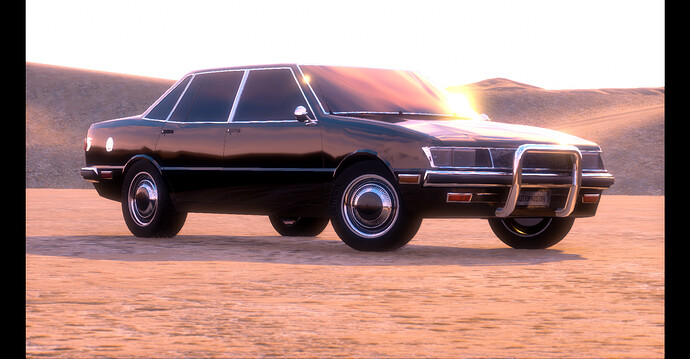 Package A:
Package A is the cheapest and most basic form of the Fallwing presidential line. It is equipped with off-road radials, basic interior, locking rear differential, a 3-speed manual transmission and a detuned version of the legendary LE6 6-cylinder engine dating back from 1960 with the legendary 2nd generation TSR Kansai making 140HP. Bash bars,a basic radio and ABS are optional. Only available upon special order.

I need it because of the PU/ET limits. I’m limited in options…

I hadn’t considered a non-truck option… Might have to see what happens if I strip down the as-yet-unnamed Sinistra compact. 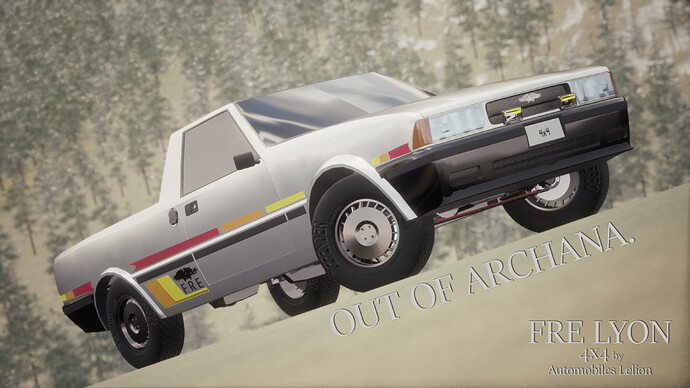 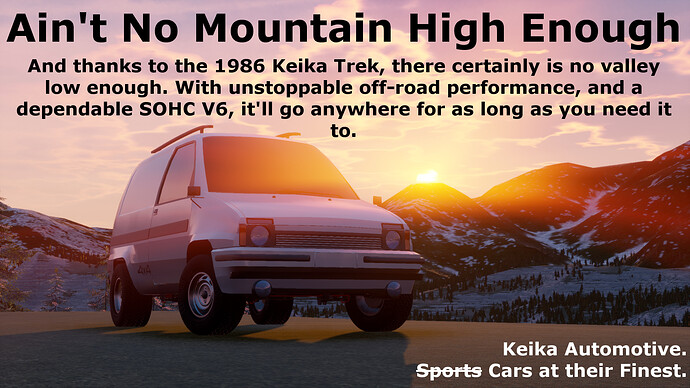 I’m going to try a CRX on stilts with bull bars, and damn the impracticality! 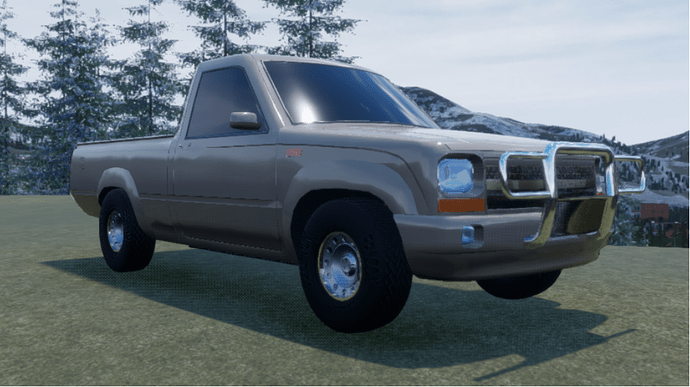 This bare-bones version of our light truck, the Ouray, is powered by a frugal fuel-injected 2.5 inline-four (which runs on 80 RON!) but still has enough power, reliability, cargo space and off-road capability to meet the needs of the DLF, for just under $8700 per vehicle. 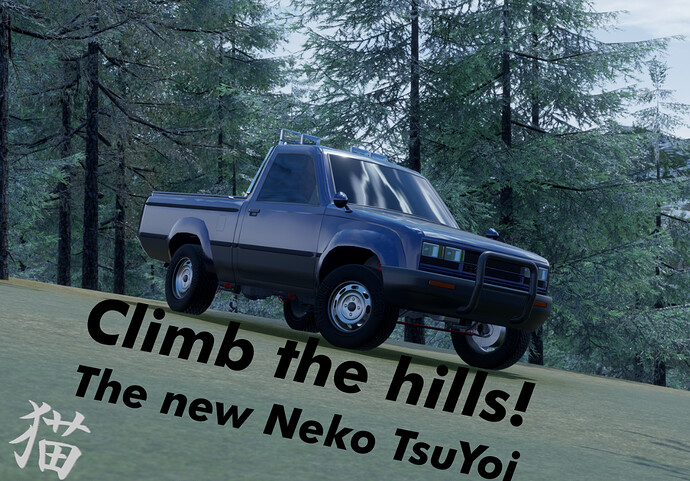 Are those brush guards, mods? I try to make an approximation of one, and it looks nothing like that.