Ahh right, because I’m Europe smaller turbocharged cars are more common so 89 AKI is what they use. Makes sense now!

@LordLetto
Thanks for pointing that out.
SUV bodies are seperate and allowed as well.
OP will be updated accordingly.
Attaching a trailer can be done by coupling the trailer node to a node on the towing bodyshell.

@Watermelon3878
This is 2017, not the 70s…
a vehicle should be capable of that by now.
Also, i am using the Automation-given value.

@HighOctaneLove
Yes. This is a european round.
95 RON is the normal fuel in germany, with 98 available at almost every fuel pump/ gas station for around 10 cents extra per litre (0.1 € extra).
Cars tuned for 91 RON will still be fueled with 95 since 91 is not available.

@Leedar
If your car has a catalytic converter and a muffler, you are good.

Apparently there is an issue where turbos are making less power in BeamNG form compared to their original Automation selves. This may have to be taken into consideration for the towing tests…

Erm…
the first idea i have is that i check the entry for the power generated and ask then if any alteration are wished to be done, leading to a resubmit of the car with a different setup…

Caught at a testing range is an LLA SUV of sorts. An image is shown below 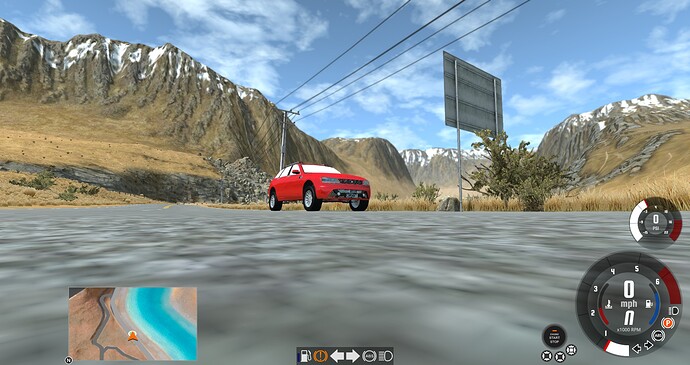 Unrelated, but related note: I have found no way to add a tow bar to the cars in BeamNG, you may have to do a utility test instead

didn’t realise that worked, gonna have to make a note of not to use my fake tow-bar, it breaks off as it is made from a mirror lol

it looks weird, but makes sure that nothing breaks off when towing…

If anyone has an idea on how to handle the BeamNG turbo issue, please tell me.

I’m trying to work the issue out as we speak, having no luck tho

It doesn’t look like the issue has a quick solution, at least thus far it doesn’t. Presumably it’s a calculation issue in Beam’s engine, but not much more is known.

The best thing that can be done is take a few turbo cars, within the contest as they appear, to Beam and see if the power loss is shared across the range of cars. That way we might find the loss percentage…

sounds like a good idea.
Time to wait for the first entries then.

These wont come until after tomorrow evening (in 23 hours).
Then the ruleset will be fixed and entries can roll in.

So the trailer + car that is going to be towed weighs 4200 lbs. Does it matter if the game says the car can’t tow that much? Because it will in BeamNG, but the game says my vehicle only tows 2600 lbs.

The amount of towing stated by automation is greatly underestimated.
This overestimation is even worse at speed.
During the preliminaries, this value will be of minor consideration, if at all.

The amount of towing stated by automation is greatly underestimated.

This overestimation is even worse at speed.

During the preliminaries, this value will be of minor consideration, if at all.

So…is it high importance or not?

to make it clear (as clear as i can)
it is of high importance, but using a value known to be flawed does not make much sense to me.
by “little consideration” i initially meant the value of Towing capacity, NOT Utility.
But since Utility IS pretty much Towing, i have to correct myself and say that the Automation Towing capacity is of course of HIGH importance.

The value does not have to reach just as high as the 1900kg of the actual towed weight, according to the towing surplus you get when going into BeamNG

The value does not have to reach just as high as the 1900kg of the actual towed weight, according to the towing surplus you get when going into BeamNG

So you don’t want an Automation towing weight of 4200lbs? Why give us that figure as HIGH IMPORTANCE when you are talking about it being flawed???

You want me to get a vehicle that has a towing value from a game that I do not own?

Surely the name of this round should be CSR77 - Ready, Set, GO (buy another game to be able to join in).

Looks like I can’t compete so I’ll await CSR78.

we might be talking past each other at this point
a higher towing value in automation is obviously better, but it does not have to be at least 4200lb since that would require a stupidly heavy vehicle.

in BeamNG, you can tow quite a bit more than Automation says you can.
that is what i meant by “towing surplus”.

In short:
HIGHER towing is better, but
it DOES NOT need to tow 4200lb according to automation
it WILL be tested with 4200lb in BeamNG if the car makes it into the finals.

it DOES NOT need to tow 4200lb according to automation

You QUOTED the weight of car and trailer…and gave a value of 4189lbs. Therefore a vehicle, in AUTOMATION, needs to have a towing capacity of THAT figure to be competitive.

in my opinion, you’ve given a bollocks set of rules for a challenge that is going to take place in a game I don’t own, has its’ own set of rules and has nothing to do with Automation!

@strop - As god of all things CSR…can you give us your view please?

Well…
at this point, i am running out of arguments and am ready to abort this CSR if @strop says so.
I tried to make a challenge with BeamNG since i was the first to have the opportunity…
Also, with little to no experience, i am realizing that hosting CSR is much more difficult than anticipated…

i am gonna leave the choice to Strop though

sorry if that CSR round does fail…

the alternative would be:

I think everything is fine. Let me sum it up for those who don’t understand.

The towing IS VERY IMPORTANT! However, IGNORE THE TOW CAPACITY THAT AUTOMATION GIVES YOU entierly. That won’t be considered at all in the final judging.