I’ve now settled (more or less) into my new schedule, and have a bit of time on my hands to run a little something here. I’ve got an idea for an ongoing, light-hearted competition here. Tell me what you think, and I might just put it into motion soon.

It’s undeniable that people of all stripes and backgrounds have a connection with cars, be it the backyard shadetree mechanic, the teenager browsing the internet (or magazines, back in the day) for photos of their favorite cool ride, or even that dude who is going through a mid-life crisis who wants a little nostalgia.

We also all know that one size most definitely does not fit all. While a '69 Camaro Z28 may be one person’s idea of heaven, another may not be impressed, instead preferring the simplicity and longevity of an old Ford truck, or even the quirkiness of a KP62 Starlet.

There is room under the sun for everyone. So here’s what I’d like to do:

People can submit cars to me, as well as posting an ad (period correct is preferable), and possibly a blurb about the car’s design and history. I will then take the cars, look at them, and write a short car-culture review. Your entry will then be assigned to a car culture group by me, and then ranked within that group. I will make a wide variety available, including both “mainstream” and “counter-culture” groups. Where you land may or may not be where you intended them to go. But that’s also the beauty and the nature of car culture. You don’t know where the next true classic comes from, nor when your car will gain a cult following.

This competition is for Automation Lore vehicles. They can be existing lore that you submit and pitch, or they can be new lore, for fleshing out companies and lines that don’t have as much depth yet as their owners would like.

Once submitted, your vehicle(s) will be analyzed and placed into one or more of the following categories, then ranked among the active models in that category:

This analysis will be done through the lens of classic car cultures as seen in the late 2010’s, 30 or more years after the vehicles’ original design. You may be surprised by where they land. Bear in mind that’s actually normal; a car’s use 30 years after its design may be very different than the manufacturer’s original intent at initial design.

Model and trim year: No earlier than 1956, no later than 1989 (they don’t have to match)
Engine family and variant year: No later than 1989, and no newer than the model trim year (again, no need to match)
Banned materials/selections: Full aluminum bodies, fiberglass bodies, space frame chassis, carbon fiber ANYTHING, V16’s, Ultimate Unleaded fuel
Other restrictions: Vehicles with a trim year of 1974 or later must also have an engine with a variant year of 1974 or later. All 1974 or later vehicles must use an unleaded fuel. EXCEPTION: If you designate your vehicle as never having been sold in North America, you may continue to use leaded from 1974 until your country’s conversion year. However, you MUST specify this in your submission, and you will ONLY be eligible for the import/export category.

We’re not building exotics here (hence the body/chassis restrictions), I also don’t have the ability to take V16’s. And the engine restrictions are there because I want to see the engine that originally came in the car. While swaps are common, particularly for the MoSport types, that’s more of flavor text and lore than the actual car file. (If you think a swap might be common, let me know what model(s) of engine can fit in the bay from your lineup in your PM) Also, if you have to play with technicalities and loopholes to submit your car, your car probably violates the spirit of this competition, and you should think about submitting something else.

I will be doing analyses and writeups on a weekly basis. Each user may submit one vehicle per week. There are no weekly themes, all processing will be added to and modify existing rankings. You don’t all need to suddenly submit on a Wednesday night; take your time, think, submit what you feel like having reviewed rather than what you think I want to review.

Please post an ad and/or picture, and maybe a little blurb about the production or development history of the model.

At this time, there is no overall deadline or competition end date. I will process entries every Thursday around 11pm UTC (3pm Pacific time)

Looks interesting to me

When dealing with an umbrella of topics so close to people’s hearts, and with everybody having a different idea about what their culture means to them, this will likely become very controversial very quickly. How confident are you that you’ll be able to discern the automotive intentions of every user that submits and how do you plan to manage objections and rebuttals?

As far as intentions, to me it’s pretty simple: While often manufacturers hit their intended goal/market, sometimes they fail, or are surprised by another market. It’s just something that happens. Also, this is a retrospective, set in modern times, looking back on cars 20, 30, or even more years in the past. The original intent more than likely has run its original intended course, and the used cars have found a new calling. Take for example the AE86. It was an economy car back in the day, with some trims having a sporty bent. Now it’s a golden child of the drift scene which, I’m fairly certain, Toyota did not purposefully design it to be back in the day.

As for objections or rebuttals, I’ll have to think about that for a bit. Maybe if I teamed with one or two other users who have been around a long time and would be amenable to acting as a check/arbiter in those cases?

I’d almost be tempted to open the floor to other veterans here at this juncture to see what they might recommend. There are pros and cons to having a panel approach. Everyone has their own expertise and personality but depending on how many people or who you use that may involve expanding the logistics and also the risk of turning the whole thing into an even bigger dumpster fire.

Or, if you think glass half-full, pure

Sounds good! In this case it’d be a more subjective approach so I guess seeing what our cars could be considered after years or decades could be an interesting read

I know I only speak for myself, but I love the idea and would actually be keen to see what others think of some of my cars, and what they imagine up - warts and all!

Automation made cars or real ones? Or both, to show similarity?

You’ve always had what I’ve viewed as a level headed approach to reviews in the past, and you’ve had interesting ideas on looking forward to what the future entails. I feel it would be more than appropriate for you to take a crack at gauging a vehicle submission on its merits, and attempt to forge a history for the vehicle going forward on big, or little a splash it leaves on its target demograph, and others. I do not envy the amount of work you may be signing yourself up for, but I find the whole prospect promising.

Perhaps start off the project with a loose theme, and work on expanding from that idea?

You have my attention.

I do like the idea of this, I’ll let it start up and stirr for a little while to see what happens before putting in some if my cars though.

Automation made cars or real ones? Or both, to show similarity?

Knew I was forgetting something. This is for Automation Lore cars. Like Generations, I’d like this to be an exercise in either pitching existing lore, or building new company lore for people whose lore is a bit sparse.

I would like to take part, mainly because I have three car companies but have not posted any lore at all …and to see how others categorize what I make beyond the way automation does.

I’d be interested too, be it as a reviewer or just as someone who posts their cars here. I have recently revived my design thread after not being active on the new forums at all, but I’ve been playing the whole time. Would love to see how other people think of my newer creations

ye know what, I’ve changed my mind, i’m in. mainly because I wanna see if some of my crazy designs can cut it against actually serious cars.

I’m in, especially because I missed out on Generations. But yes, this sounds good!

Hokey dokey, I’ve updated the OP with guidelines and examples. Let the floodgates open! Or something. 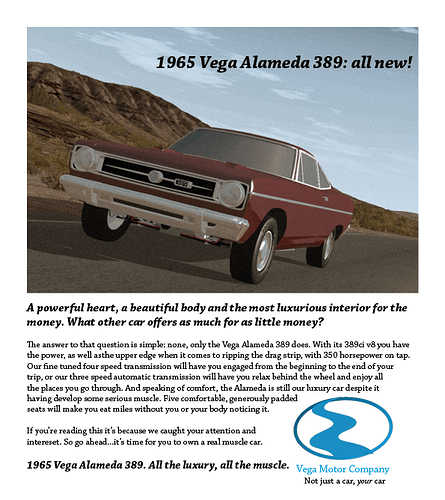 This is the original ad for the 1965 Vega Alameda, with the 389ci engine option (6.3L). While it was advertised as a 350hp engine, the real horsepower rating is roughly 300hp net, which still made it quite fast back in the day. The Vega Alameda was Vega’s early foray in the muscle car market. While they would soon also have the smaller Saetta to cover the pure performance segment of the muscle car market, the Alameda tried to combine the best elements from luxury coupés and muscle cars, creating a luxury muscle car, complete with wide bias-ply tyres.

The Vega Alameda also had some representation in motorsports, most importantly in ASCAR in 1966 and 1967, driven by a driver nicknamed ‘Coyote Jim’.

(OOC: I think this is gonna end up in the muscle category, but let’s see how it does!)

So, do I understand this right, the vehicle has to be introduced before 1956? Translated to real life it would mean that you could not enter a 1968 VW Beetle since the model itself is older than 1956? Just asking to be sure, not to complain in any way…