Founded in 1947 by Brian Curver, the first model produced was the Delray, an affordable sedan with a reliable, torquey 3.5L L6. The car had a lot of success due to it’s low price, decent performance, and great habitability. In 1952, A coupe was made on the base of the Delray: the Brutus, a sports-oriented coupe using the base L6 and some V8s down the line. the brand expanded, producing multiple models for different sectors -including pickup trucks, vans, and sporty coupes. Curver shocked the crowd in 1962, when showing off the Nantes, a powerful, modern, sleek GT car with a 7L V12 producing a lot of horsepower.
The brand became known for producing reliable and affordable cars with decent performance, and it became their credo. Now, the venerable L6 the brand started with is still in service, in a number of declinations, but still strong as ever.
Curver also worked with Leonite since 1966 and Tsoshibaru since 1971, helping both of those brands expand and giving them a distributor in Asia and Europe. 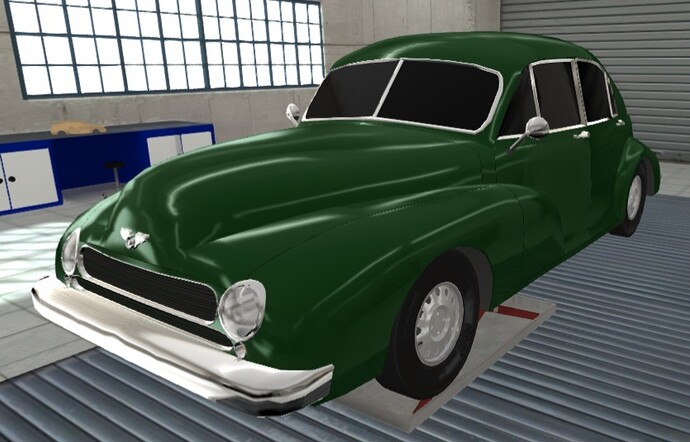 aa7c653540.jpg835×536 112 KB
The Delray also has a better trim, the Luxury, with a better interior and general finish, including a luxury AM radio and reworked suspension. This model comes for 13000$.
1951 Model changes:
The Delray is still the only model in production, but the L6 was upgraded, recieving a two-barrel carburator, and a better exhaust header. The engine now produces 140 hp and 281 nm of torque, which renders the car much more agreeable to use. It also boosts it’s performance a bit, allowing it to reach 161 km/h! The price tag changed accordingly, going to 10800$.
The engine is also made available for the Luxury trim and changes the price, again, putting it at 13200$.
1953 Model changes:
Curver’s first V8 is finally here! The 5.2 liter pushrod block is more compact than the L6 while being just as reliable an replaces it in the Luxury trim of the Delray. The price climbs, again, to 13700$ this time. The base sedan now also has a Sport package, which includes reworked suspension, better brakes, a 4-speed gearbox, the 5.2 liter V8 in a sportier configuration (220 hp, 470 nm) and a Luxruy-trim interior. It is the first Curver car to reach 200 km/h! However, while the performances are quite hefty, the price tag is as well: the car costs 15700$.
A 4.1L V8 also appears in the base sedan, making it 11700$.
1952 Model Lineup:
Curver Brutus
A sports-oriented coupe, the Brutus has the more powerful version of the 3.5L engine, and it’s standard trim is worthy of the Delray’s Luxury trim.

1956 Model lineup:
Curver Portside
The replacement for the Delray, the Portside is better made, has a modern design, modern options, and modern standing, while loosing none of the reliability.

The standard trim did not change, still having the L6 and the least options you could have. This new model was sold at 11900$ in 1956.
A new trim made it’s apparition: the Deluxe. It had the EA52-41P V8, standard radio, standard 4 speed gearbox, and came at 12400$.
A Deluxe version with the 4.7L V8 was available at 12600$.
The luxury trim was here too, now named Prenium, with it’s 5.2L V8, power steering, luxury interior, reworked suspension, for 13800$.
A convertible replaced the sport model, using the revamped sporty 5.2L V8, now making 238 hp and 450 nm of torque. The price tag hung up there at 16300$, however.
Curver Panama
The Curver Panama is Curver’s first pickup truck model. It perfectly reflected the brand’s type of vehicles: simple, rugged, dependable, and affordable.

The base model with short bed and the 3.5L L6 coupled to a short 4 speed gearbox was available for 10200$. The long bed version ran for 10400$.
A V8 version with power steering and better tuned suspension was running for 10900$. The long bed model was up for 11100$.
Two special versions were made: The Omen, a “luxury truck” with well finished interior, sport V8, radio and power steering was made for two years and was for sale at 13000$, and an offroad model was made using the normal 5.2L V8, 4WD, and offroad tuned suspension was for grabs at 11200$. However, it was only available in short bed configuration.
Curver Poca
The Poca is Curver’s try at doing an SUV on the base of the Panama. 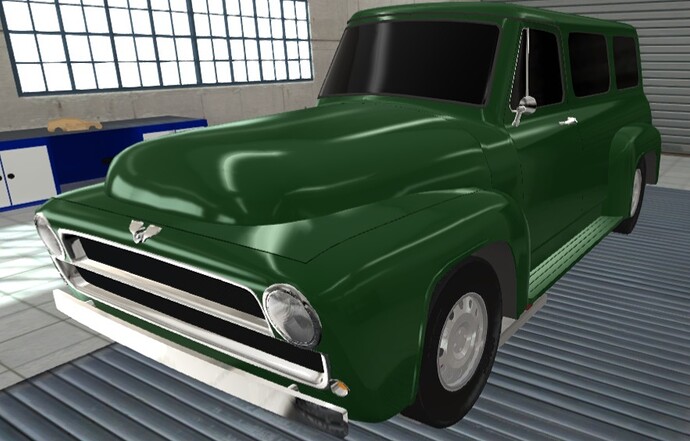 1958 Lineup changes
Curver Brutus
The Brutus got an upgrade, now based on the same chassis as the Portside. The more modern body hosts new engines, most notably the EA66-63PS, coupled to the same 4 speed manual gearbox as most of the other engines. The hree trim levels say the same, changes being more on the engine available than on the trim themselves.
The Base model still has the EA35P with the basic Brutus package, available at 11300$.
The Luxury trim is found at 12500$, with, again, the same prenium interior, standard radio and power steering.
The Sport model sheds some weight and trades it’s fake leather and plump seats for something more slim. The suspension is tuned and special sport tires are mounted from the factory. This trim is available at 16200$. 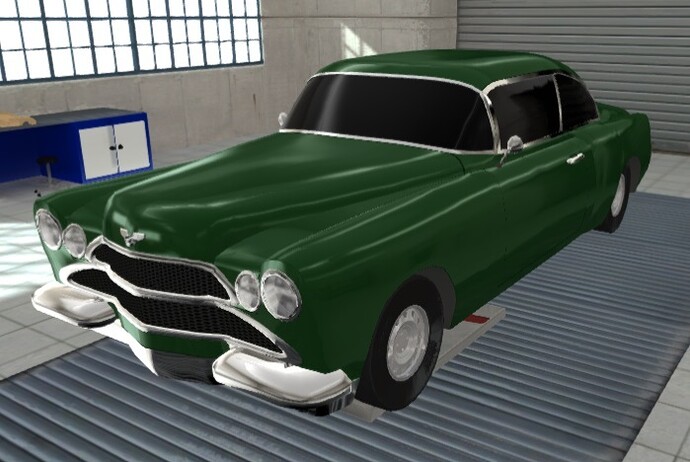 1960 Lineup changes
Brutus
Another generation of Brutus, this time coming back as a more Euro-looking GT coupe. Still, however, a brutal American sports coupe under the hood.

It comes back again, the base trim staying, essentially, the same. Starts at 11100$.
The Luxury trim trades it’s EA52P for a EA66-58P V8, with more torque and horsepower, for better cruising, at 14200$.
Finally, the sports trim comes in, with it’s 6.3L V8, reworked suspension, and sport interior, at 15400$.
1962 Lineup changes
Nantes
The Nantes was Curver’s first try to make a real GT sports car. By mending two EA35P engines together, the EA70P V12 emerged, a very powerful and torqueful engine. 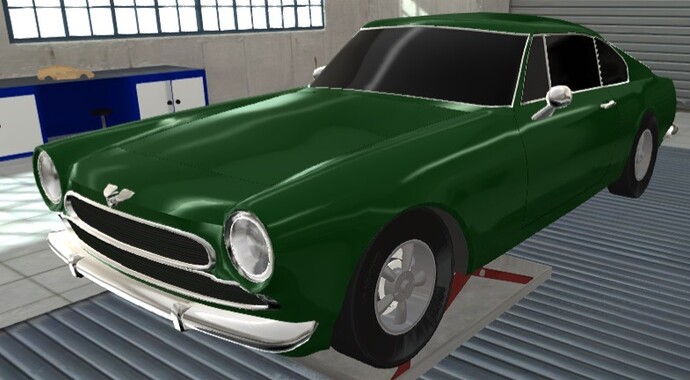 3536e31186.jpg785×433 85.9 KB
It uses the same body basis as the Brutus, but uses new technology frame-wise and suspension wise: unibody frame, progressive suspension, double wishbones on the front and semi trailing arm in the rear ensure great grip, while the new disc brakes on four wheels and sports grade tires make sure the car doesnt slip when turning or braking.
It showed a hell of a price tag, at 53900$, but was still a success.
Portside
A new generation of Portside was made for the 1962 model year. The design was critiscized as bland and boring,but the car was still well sold because of it’s qualities. 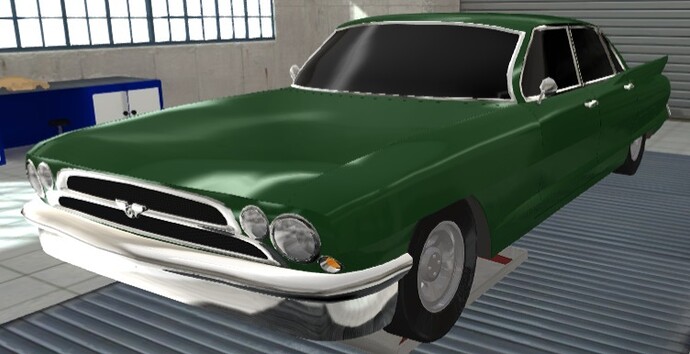 They all look exactly the same. And I like it.

They all look exactly the same. And I like it.