Delta Motor Company produced its first vehicle in 1948, the Dyna Vector. The Vector was designed with affordability, reliability, and performance in mind. A complete vehicle sold for only $965 in 1948, with the four cylinder 1.3 L Dynano engine available as a $142.50 crate motor. 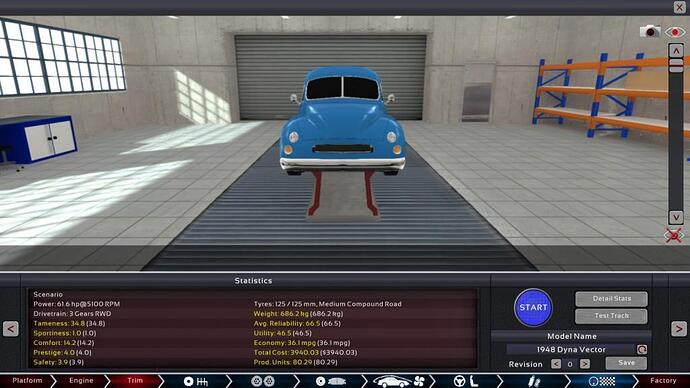 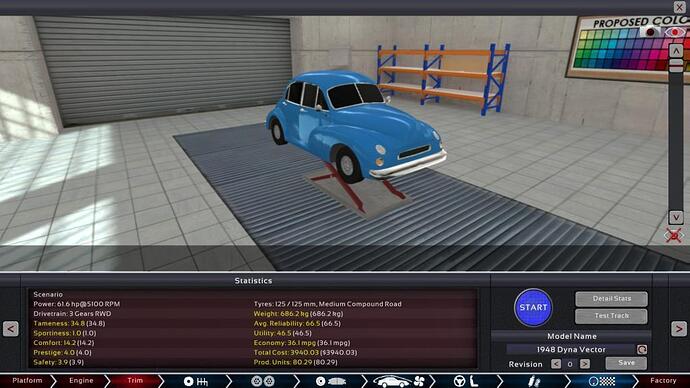 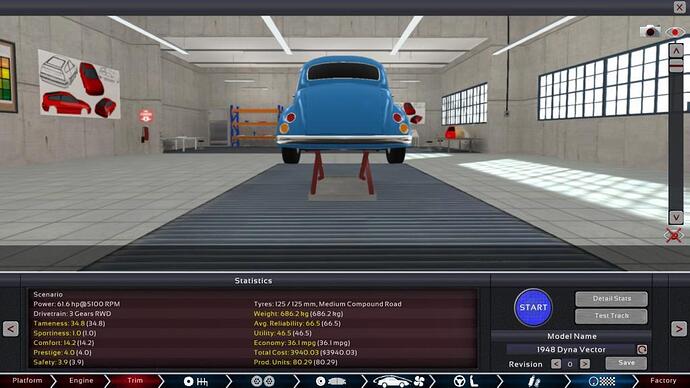 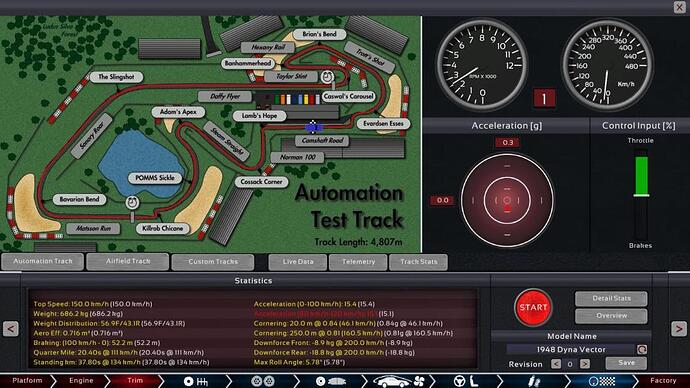 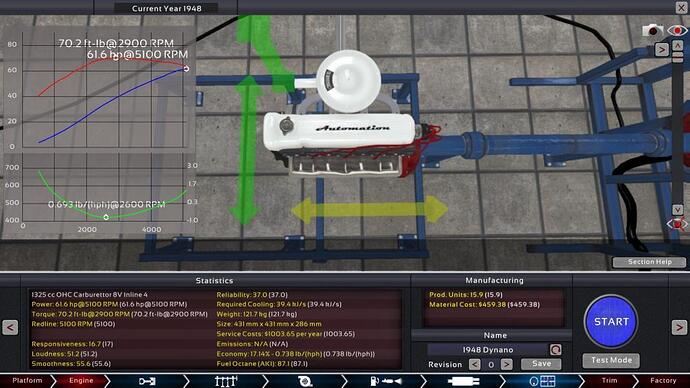 1955 saw the introduction of two new vehicles and engines by Delta Motor Company. The first was the Delta Rocket, a larger and higher performing step up from the more basic Vector. Being a larger vehicle, the Rocket required a larger engine, a role which was filled by the 2.0 L Starstreak straight-six. The Rocket sold for $1,615 in 1955, while the Starstreak was available as a $320 crate motor. 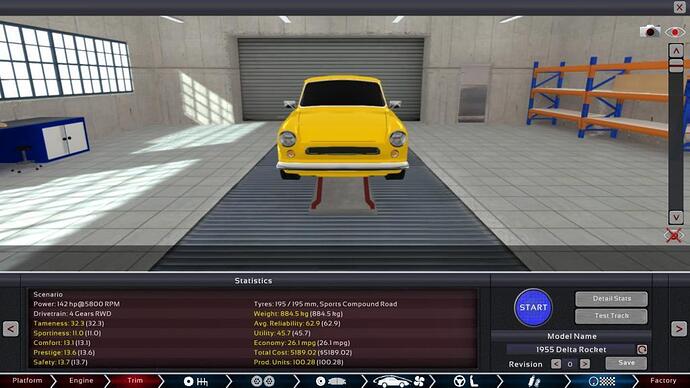 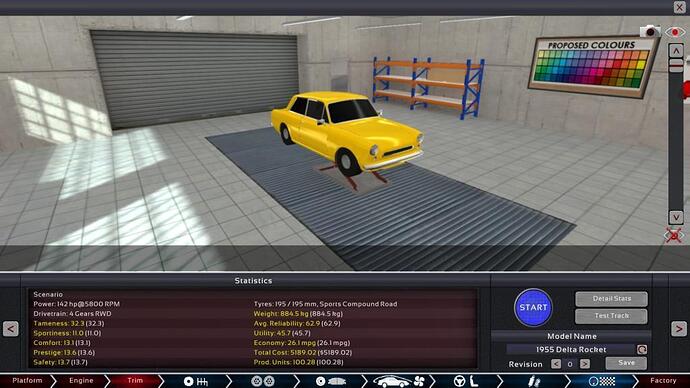 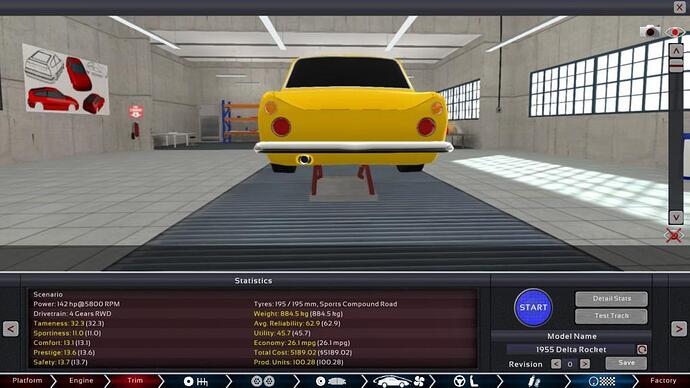 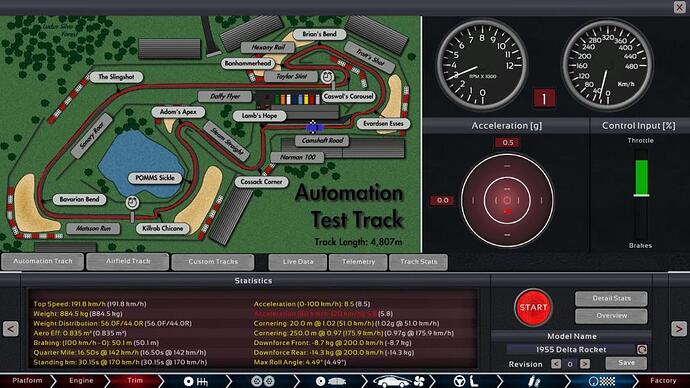 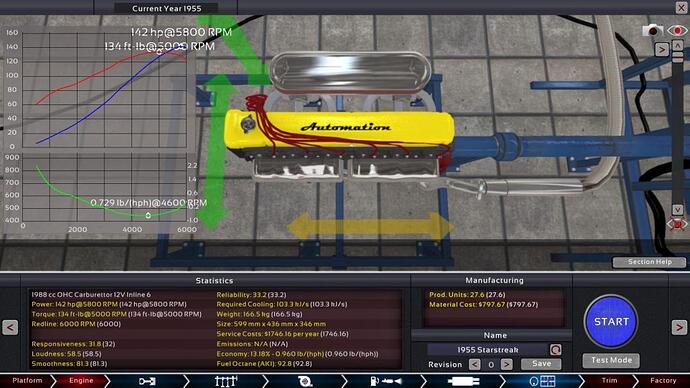 The second vehicle introduced in 1955 was the Delta Starfighter, a sports car in the tradition of European grand touring vehicles. Powered by the high-torque 2.7 L Starburst small-block V-8, the Starfighter was able to accelerate from 0-60 miles per hour in 7.7 seconds and achieve a top speed of 135 miles per hour. The Starfighter sold for $2,990 in 1955, while a Starburst crate motor cost $660. 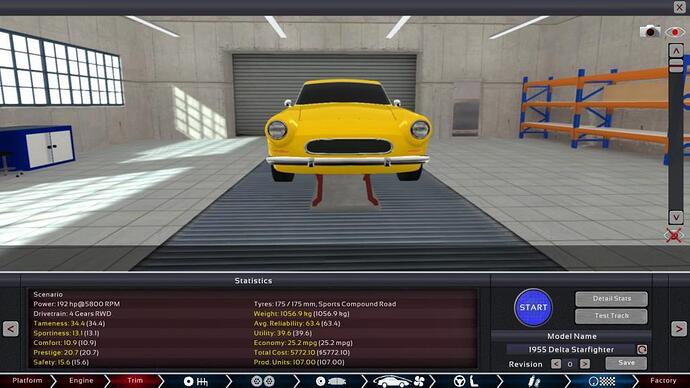 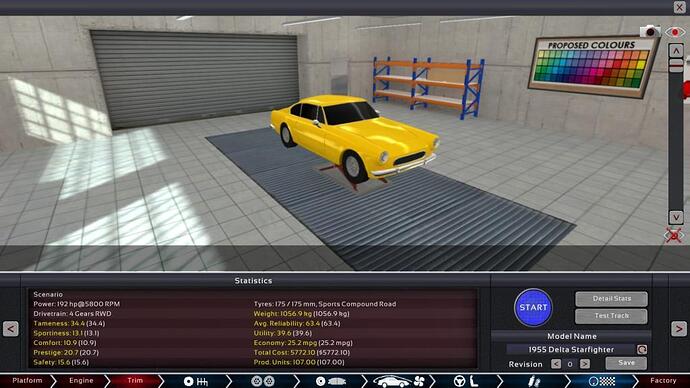 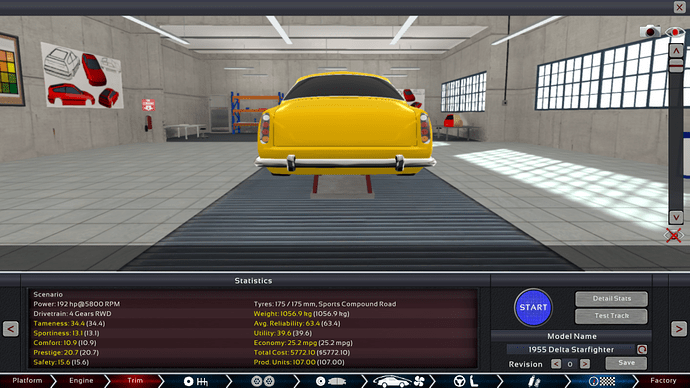 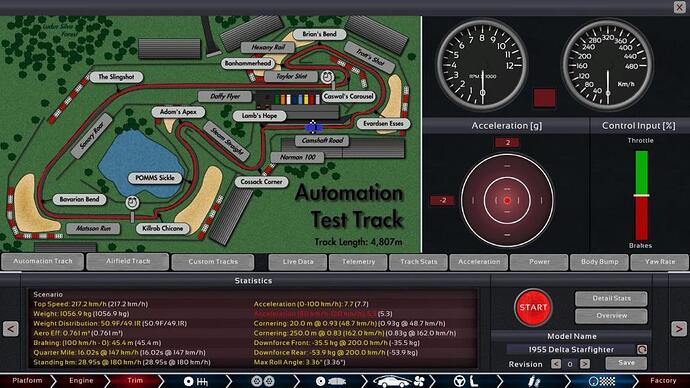 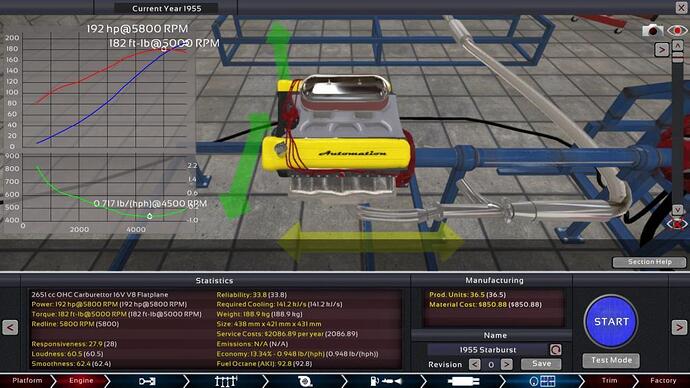 Looking at historical vehicles and engines and some of those here, it seems mine are quite high performance. It’s odd because I don’t have the engine tuning set too high on my mass production vehicles. The cam setting is 65 and engine timing is set to 63 or 64. The quality settings aren’t increased either. However, all my engines are rev limited to maximum horsepower output and use all engines except the Dynano (my economy engine) use the richest fuel mixture the engine can handle.

I’ll see if I can post my limited edition Starlite Starfighter here. It has an aluminum body and other modifications to reduce weight, such as the deletion of the rear bench seats and radio. It also has a Starburst SL engine with DOHC cylinder heads, a long tube exhaust, and other improvements to really increase horsepower.

1955 also saw the launch of the Starlite marque. Using technology originally developed for racing applications, the Starlite Starfighter was developed with an aluminum body, along with other enhancements. The Starburst engine also received lightweight headers and a new dual overhead camshaft cylinder block, increasing the output of the highly tuned engine to 259 horsepower and 204 feet of torque. Despite having performance to rival that of the luxury marques of Europe and holding the world speed record for a production vehicle for three years, the Starlite Starfighter sold for only $5,195. However, it was unable to compete in passenger capacity and luxury, seating only two and lacking a radio in order to lower weight and reduce distractions. The Starburst SL engine that powered it proved to be a popular crate motor for racers, selling for $1,150. 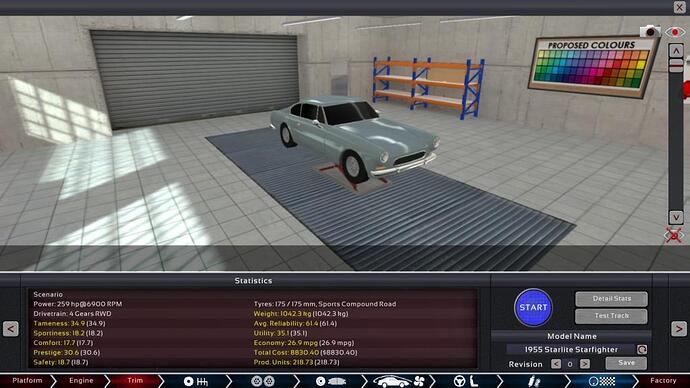 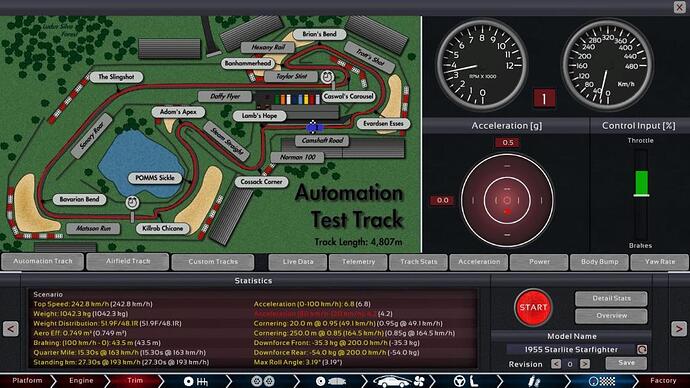 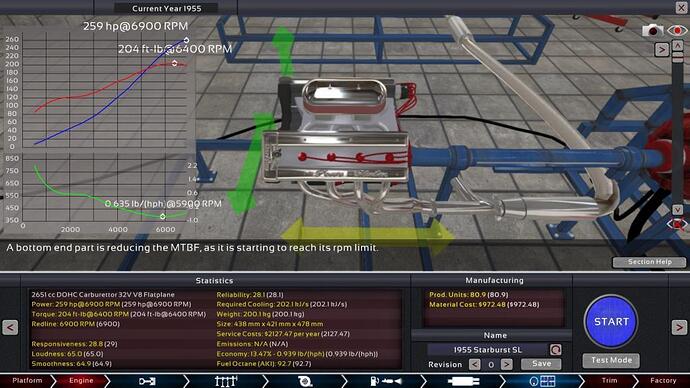 I’m not sure myself. I was only able to put them on the Starlite Starfighter, the Delta Starfighter can’t equip them. Perhaps it has something to do with the aluminum body?

Well, for starters, we do not know what size his rims are.
Besides, tire quality can change the minimum side profile.

It’s quality sliders. I’m going to add the 175 mm tires to the standard model for commonality and because it’s inexpensive for the improvement it provides.

The SL-80 was the first vehicle sold solely under the Starlite marque, as opposed to being a performance variant of an existing Delta design. From the mid-engined body and frame to the 4.0 L aluminum DOHC engine, all the performance related components were sourced entirely in house. While advanced materials and technologies were used throughout, Starlite was tasked with making the vehicle as reliable and simple to produce as possible. Speed and performance levels close to those of European supercars was achieved, but at only a fraction of the cost. The SL-80 sold for $26,200 in 1982, with the SL-80 Jet engine accounting for nearly a third of the total vehicle cost. 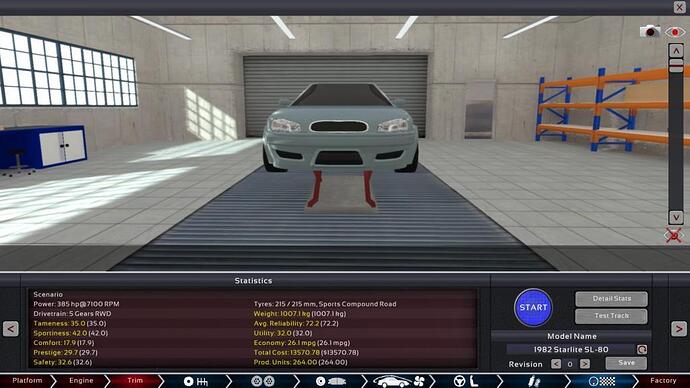 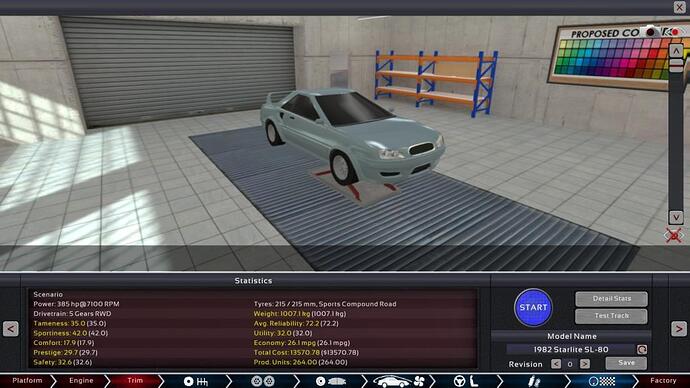 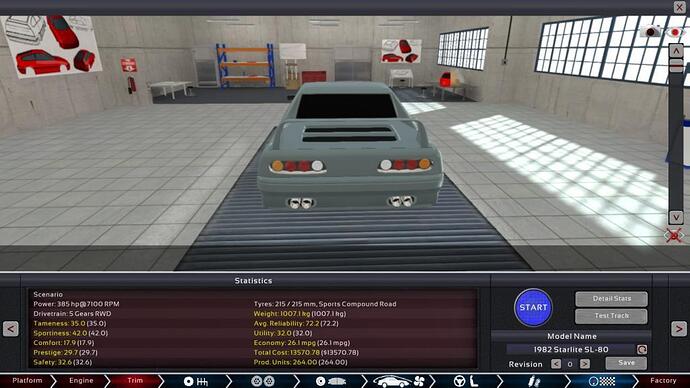 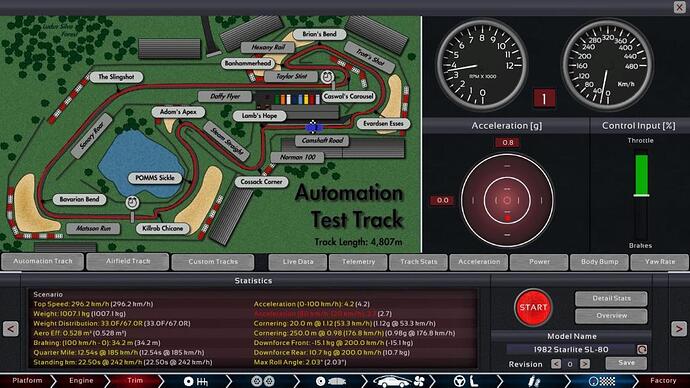 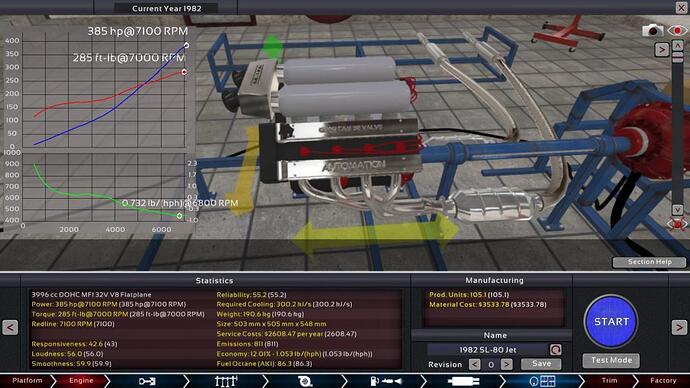 Automobile technology significantly improved throughout the late 1980s and early 1990s, and Starlite embarked on a program to improve the SL-80. The resulting SL-90 was a massive improvement. The chassis was of a new design, featuring polymer panels over an aluminum frame. The engine was improved too, being constructed of a new aluminum alloy enabling sleeveless construction, and featuring variable valve timing, variable valve lift, and digital fuel injection. Other electronic systems were featured as well, including ABS and traction control. An aerospace style fault detection and performance tracking system was also featured, allowing drivers to better keep track of vehicle maintenance needs and wear. Due to improvements in technology, the new digital SL-90 cost only slightly more than the analog era SL-80, selling for $43,300 when new in 1995. 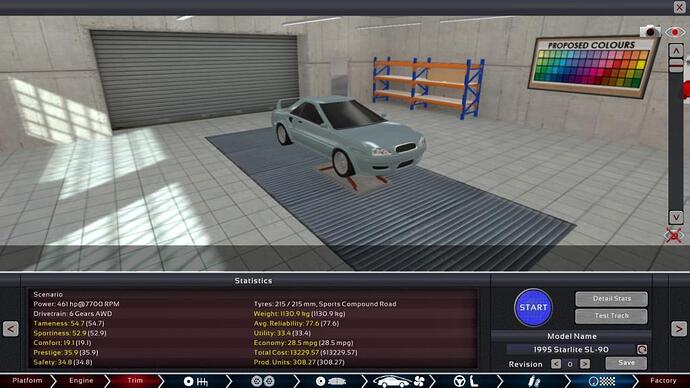 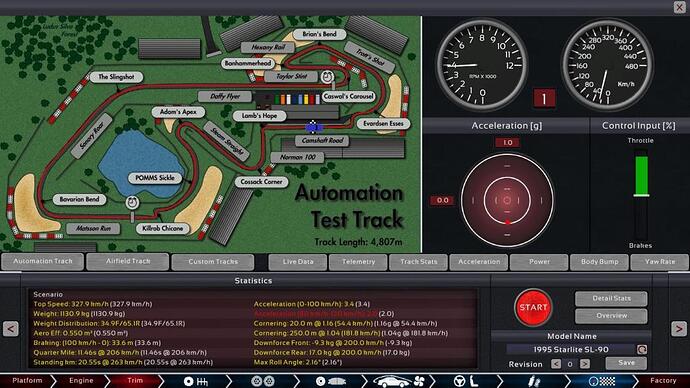 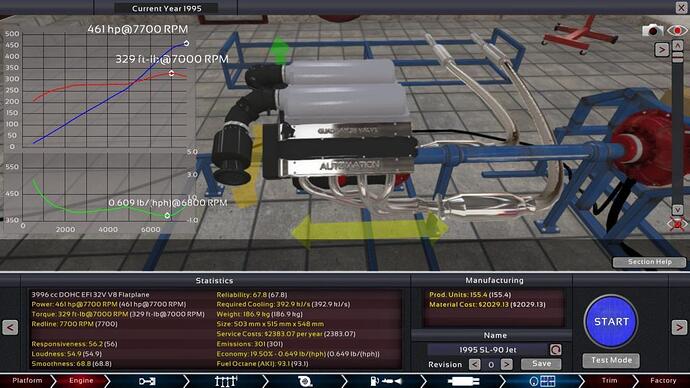 nice, what are the track times?