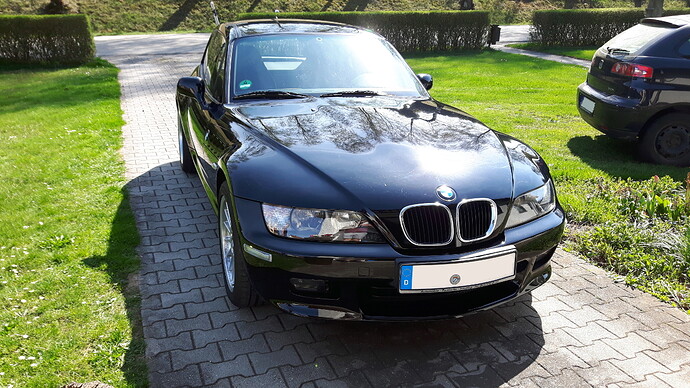 I was looking for a BMW Z3 Coupe in good and original condition for almost 3 years now. I never searched very actively and I always was not sure if this car was a reasonable choice and/or out of my reach. But when I found this one, I went for it. If I didn’t do it now, I would probably never have bought this car.

Although many people think this is an ugly car, I always loved it from the very first time I saw it in a magazine, when I was at the age of 10.

Currently the car is at my parents’ home waiting for inspection before I take it on the 350 km journey to my place. More pics and info coming then! 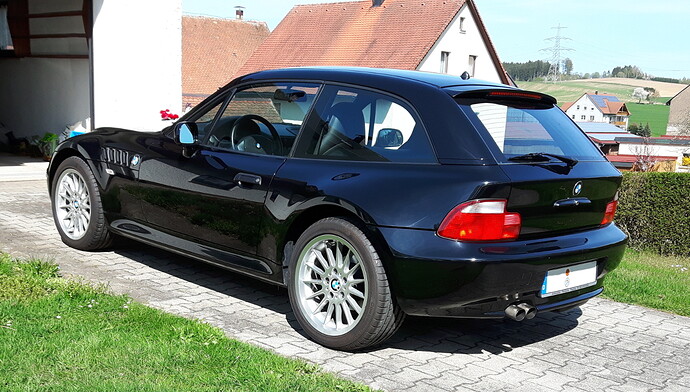 congrats on the buy, don’t listen to the haters, the Z3 is a beaut!

I actually like the original Z3 coupe very much indeed. OK, so it’s not an M Coupe, but it’s the next best thing, and with a normally aspirated straight-six under its bonnet, it’s not exactly slow anyway.

Great, Finally you have it

Waiting has paid off finally

A quick update: The Coupé got the promised inspection:

After that, I took it to my home (350 km highway drive), but I left the highway after 200 km and took side roads instead. What a blast, especially the engine! Smooth, not too loud, plenty of power. Although I drove quite relaxed, it already made me hungry for more. After the ride I got a nice surprise at the gas station: it averaged at 8.5 l/100 km.

So when driven a bit more sporty, below 10 liters is definitely no problem.

During the weekend I drove it through the vineyards in Palatinate together with a colleague in his Z4 3.0 convertible. Very nice roads, nice weather, lots of fun. And I already noticed another advantage of the Coupé: My colleague has a severe sunburn after 4 hours of driving, but I am completely fine

Next plans: wash the car (currently lots of pollen and dead insects) and give the leather seats and dashboard some love. Hopefully soon I’ll tour the northern Black Forest. More pictures to come!

Safe to say it has a little more power now too?

Hm, no, it’s not something I could really feel. Mostly because I didn’t drive it pedal to the metal before and after the change 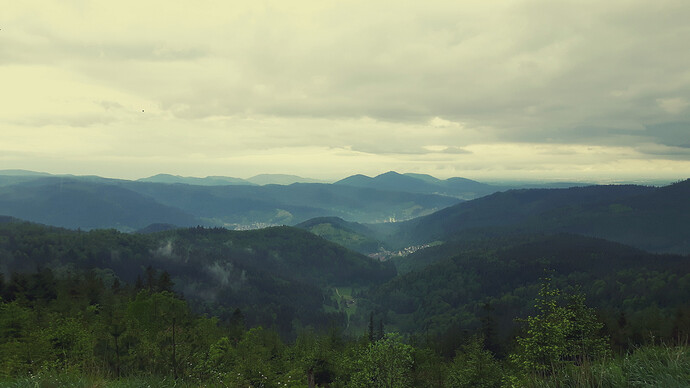 Today I drove to the northern Black Forest including a tour of the Schwarzwaldhochstraße. At the beginning, it was a bit rainy, but in the end weather was terrible with lots of rain and visibility < 50 meters because of fog. Nevertheless I found one nice photo spot at the beginning at about 900 m above sea level and a view to the south. Although the Schwarzwaldhochstraße is mostly limited to 70 kph, I will definitely come back for some more great views. 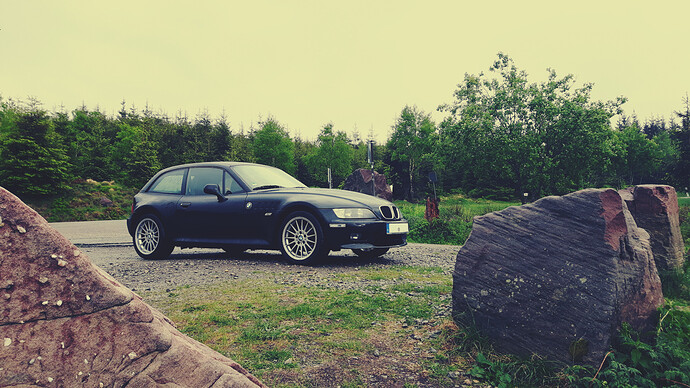 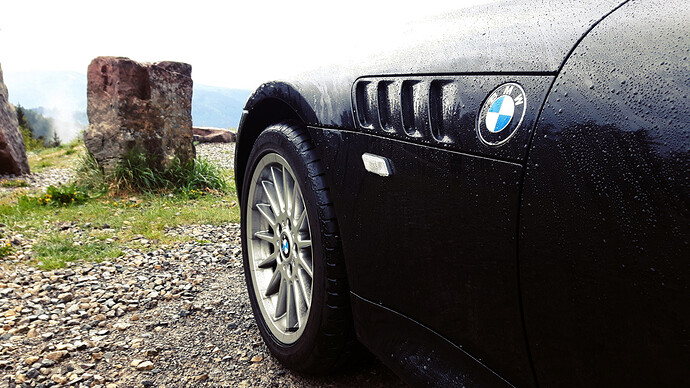 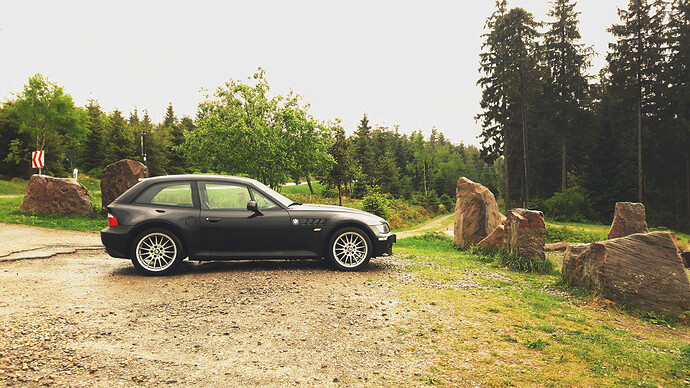 Thank you for all the positive feedback! More than a month has passed now and I made use of the time for a few more tours and activities. The Coupé is running like a charm and as I am getting used to it I drive it a little bit more sporty from time to time.

I definitely want to do an ADAC driving safety training soon, as my last one has been done about 5 years ago with my FWD Seat Ibiza and the Z3 has surprised me with quite some snappy oversteer. When I was turning left from a red light in the wet and used a little too much gas as I released the clutch when changing from 1st to 2nd a bit too fast… Seems like the simple throttle-based traction control is not reacting fast enough in those cases… Saved it like a boss though 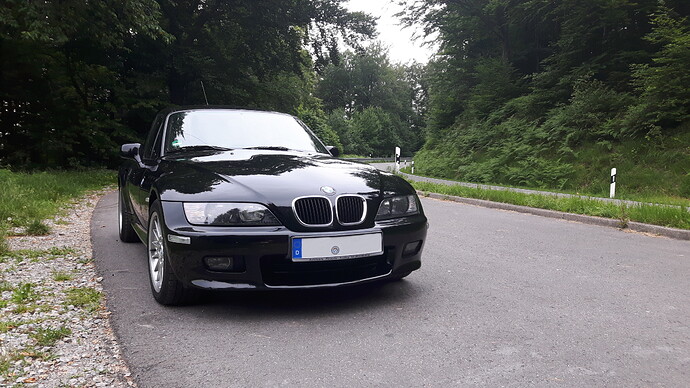 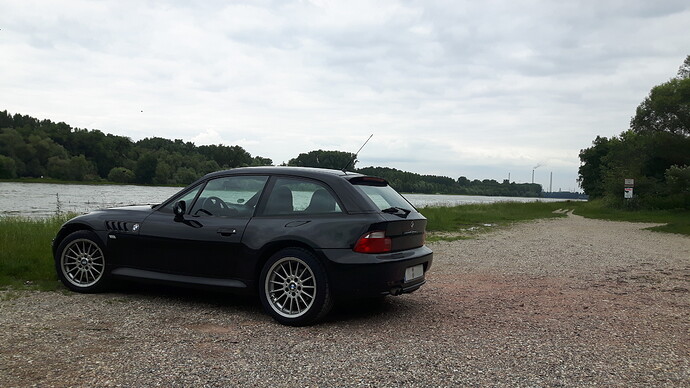 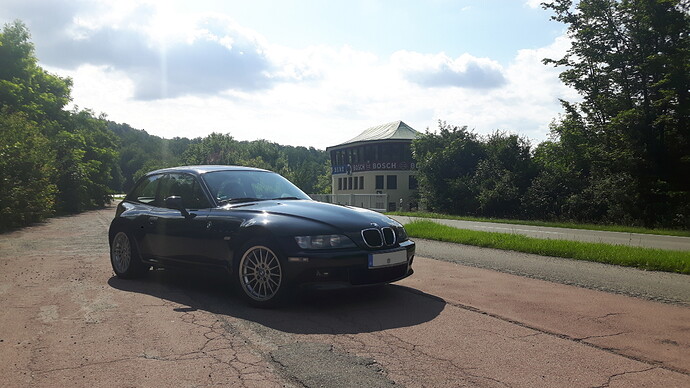 20180617_0948072304×1296 2.35 MB
A shot from the pit area of the old Solitude raceway near Stuttgart. I went around the 11.4 km long final layout of the track which still is a public road today. It’s limited to 70 kph or lower though, so no real fun to be had except of thinking about what racing must have been like around the 1930s (motorcycles only) and 1960s (Formula 1 & 2). Definitely a very interesting and dangerous layout back in the days with crazy elevation changes, tight corners, fast-flowing corners and high speed straights. 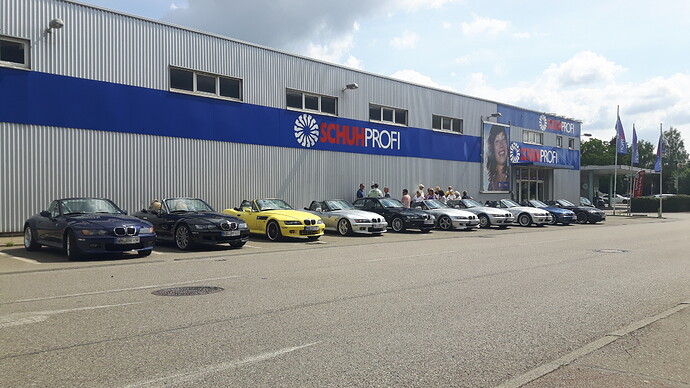 I’ll become a member of the club soon and hope to get some good contacts and advice on fixing small issues with the car. I already got a nice contact to somebody with good technical knowledge owning a quite similar Z3 Coupé living 25 km away.

That’s it for now! In the next updated I’ll be covering the interior of the car and probably all the mostly minor issues I want to sort out one after the other.

Oooof you got the coupe, now that’s for the real connoisseurs (and damn hard to find in Oz). I actually like the look of the Z3 myself, what stopped me from ever considering it was what I keep hearing is a mediocre chassis, but maybe that’s just restricted to the more common open top.

But yeah, good going on finding a coupe, looks really good, and it’s a rare sight.

Yes, the chassis stiffness of the Z3 convertible was a letdown for the sporty drivers. The coupé has the same reinforcements as the convertible and a fixed roof on top of that. That fixes the issue in my opinion, the car does not feel wobbly at all (except for the shaky driver’s seat in my car which needs to be fixed at some point).

In case you talk about the suspension layout: Of course the general layout with MacPhersons in the front and semi trailing arms in the rear is not the most sophisticated for a sports car - but the way I drive it doesn’t make it obvious. I don’t have real-life track experience and have not driven any really sporty car in my life. In my opinion the car feels very neutral and allows for quite high cornering speeds.

The engineer’s perspective: It probably was necessary to have a non-optimal rear suspension layout to make up for the general front-heaviness caused by the quite large engine. Another countermeasure is that the rear track width is considerably wider than the front - this is pretty unusual for non-supercars. All just theory, dunno if it makes sense

It’s a car built out of leftovers, compact rear subframe, e36 front, sexy body, and a…dated array of engines for the time. In any case it makes for some…less expensive parts, and for very lively passive rear steering on the limit or on uneven roads. Rear camber and toe change drastically depending on how compressed the rear springs are. Stiff coilovers and fat antiroll bars make it more manageablе, as well as not too wide tires.
In any case, every truly good BMW came with semitrailing arms Imo.

I guess it is time for an update here

The Coupé is still running like a charm, it has done the MOT without any issues late last year and I still enjoy it every time I drive/see/wash it. Two days ago I also took it to the Ring for my first ever Nordschleife lap in the driver’s seat. I obviously didn’t push too hard (gotta have some respect for the track), so the scariest part definitely was to make room for the crazy fast guys in their Porsches. In addition to that, the barriers seem to have moved a lot closer to the track when you are driving your own and real car there - so next time, I’ll rent a car.

Anyway, here are some low-res pics with the links to mid-res photos with watermarks on the shop page in the pic number (haven’t yet decided which ones to buy):