Yep. A bicycle. May not be the most exciting thing here, but a bit of context.

First off, i do not have a driver´s licence and thus cannot tinker with cars, especially not in the middle of a major german town.
Second, i needed a bike for university anyway and thus bought one used.
Third, i figured tinkering with bikes is earsier (and safer) for a noob in… well… tinkering like myself.

DISCLAIMER
Numbers: Metric [ Imperial ] → Number [ Number ]
Currently, all pictures are Placeholders; soon to be replaced with actual and/or better pictures.
I DO have moderator clearance to post this. 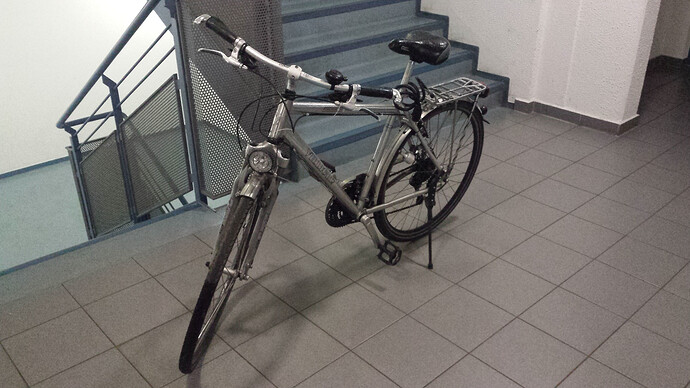 Villiger Vancouver RC
presumably from the early 2000s, considering the company went Bankrupt in 2005.
According to my research, they were good, but too expensive for what they were when new…

Short story: from a friends`s parent

Long story: When enrolling to university, i moved house and had no bike to commute across the city. I did have full access to all of saxony´s public transportation including SZ-Bike, a bikesharing service.

The bikes were good enough, but having to find one and park it where allowed soon became tedious and i began searching for a bike of my own.
Not too long after, i found it. A friend told me that his father had it sitting in the basement and didn´t need it.

I went there, had a look and discovered a few issues…

The seller did offer good service though, pumping ip those old, high-quality rubbers and fixing the brakes.
The rear gearbox was left as is, and the light wasn´t fixed due to lack of daylight…

But in the end, it did work, it drove and was good enough for what i needed…

And here it is.

It came into the seller´s hands by being found on the side of the road, without a saddle.
He hande it in into the lost property office and it was out of his mind for half a year. He went back, asking if the Villiger is still there. Lo and behold, it was. And so he took it. (if a lost object is not claimed by it´s actual owner within six months, it automatically changes ownership to whoever found it)

Rebuilding ensued, with a (then new) saddle and some other parts to get it working again and he rode it for about 1 1/2 years.
Then the Villiger got replaced by a pair of new bikes (one of which was for my friend who´s idea this all was), sending it into the basement, where it sat for another 2 1/2-ish years. Until i bought it.

What i initially wanted to do with it

Nothing much…
ride it for two months, get a new bike and toss the Villiger into scrap metal…

What i am actually going to do

Yep. Fully remake that thing and save it from the scrapyard (it`s frame, at least)^.

Hope it sparked at least some interest, despite being a bicycle…

DISCLAIMER:
No pictures this time, as this part is being written retroactively

So…
A week in the rear carrier started rattling about a bit. 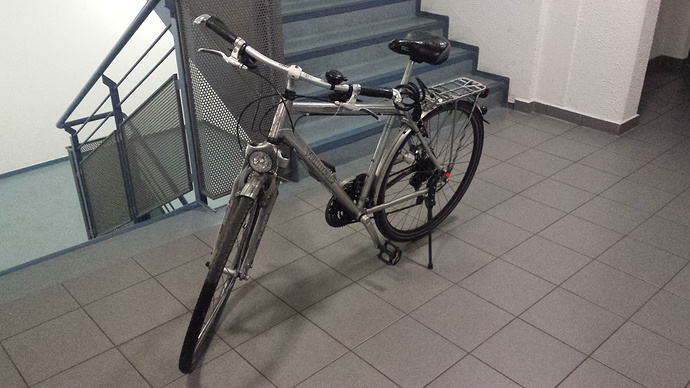 The one marked in red and the same one on the other side.

Replacement bolts weren´t expensive at all, at only 1EUR
[ 1.11USD ], but after installing them, another issue arose.

The nut which holds the bolt in place blocks off the 8th (smallest) rear sprocket, preventing any power transmission.
Easy fix. I thought…

“Let`s just screw it in the other way around and it´ll clear the sprocket.”

Did as told… aaaand… it worked!

guess my 8-speed tranny now is a 7 speed…

buying A LOT of parts

The fun stuff begins.
I bought quite a few parts for the project.
Below is a pic of them including a list of parts accompanied by their price, type of part and reason of purchase. 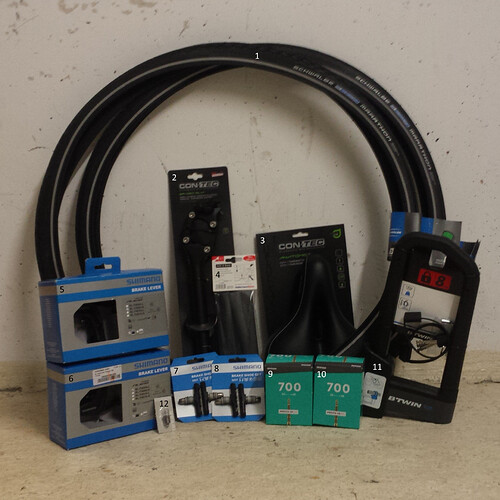 Inastalling is due for this saturday (in two days). could not be more hyped after spending 200+EUR [ 221+USD ] on fawnceh new parts.

A few pro tips from a fellow cyclist:

As for cold brake levers, personally I just wear gloves all the time, especially when it’s cold. My hands tend to freeze from the wind, not the brake levers.

Apart from that say goodbye to all money you have. Soon you’ll have 4 bikes at home and shopping for a 5th one

If your lever goes to the bars,…

Tried that. TWICE. with little success. also the pads are fairly well worn…

As for cold brake levers, …

Same here, but: Gloves + some rain + below 0°C temperatures = them potentially freezing to the levers

Still.
THANKS A LOT for the input!

Yeah, when the puncture protection rubber shows, that’s kinda due for a replacement

11:00am
Friend arrives at my house. He also has some stuff to do on his bike (changing tyres). We head off to a parts store and get two sets.

01:30pm
Arrival at the “workshop”, which is just my friends basement… Work is started changing tyres.

03:00pm
Change of tyres done on both bikes. We head off for a local gas station to fill them up with some air.
POOF
Rear tyre of friend´s bike bursts due to it not being fitted properly.
Tyre is redone and refilled (this time properly). Brake pads are replaced on the Villiger in the meantime.

about 07:00pm
Assembly of all replacement parts completed. Brake cable fucks itself when getting the bike out the basement for a test drive. Group (me and two friends working on their respective bikes) is forced to head to cheapo parts store (only one open on a saturday evening) to get a whole new set of brake cables and linings ( 10EUR [ 11USD ] )

just before 08:00pm
Arrival at the basement where we worked the whole day through.
Work is started replacing anything regarding brake cables.

09:13pm
FUCKING FINALLY DONE WORKING
Three bikes head out for a test drive (more info on how it drives tomorrow).

But i finally managed to get it working.

Since i can´t be arsed to type a whole novel now, the actual driving experience has to wait until tomorrow…

It has been about ten weeks since i instalkled that big pile of parts onto the bike. Now that i have ridden it for god-knows-how-many miles, i thought i´d share my experience with the new parts as well as some stuff regarding the old stuff still on there.

First off:
Bike-Modding is AWESOME

For anyone too broke/ young for a driver´s licence, i wholeheartedly recommend getting a cheap bike in decent condition and do whatever the hell you want to do with it! That thing may have cost me 300 Euros [ 335USD ] already (not accounting for replacement parts of the second and planned third batch). But it has served me well enough to warrant the spending. At least the new stuff did

The good bits of the past ten weeks

The parts i´ve bought have been working flawlessly since installing them!
Short rundown:

Schwalbe Marathons are great! No flats (yet), great rolling resistance, and more than enough grip for me as a rider.
Same goes for the inner tubes. Perfectly sealed and reliable.

Saddle and seat post have been the best investments EVER! TrackpadUser said something about harsh tyres… My ass doesn´t feel a thing about the supposed harshness with these beauties. Fine impurities being covered by the saddle gel stuff while actual bumps get soaked up by the softest possible setting on the seat post. Just. Pure. Comfort.

Brake levers/ wiring/ pads… well… they do the job. Particularly happy about the levers, since they aren´t gross to touch anymore. So… yay?

The bike lock also is a case of “good enough for my needs”. Only real issue is it being kinda clunky to use because of it being a U-Lock. At least it´s safe.

That lightbulb i bought has proven itself…
…UTTERLY USELESS!!! Brightness has improved ever so slightly, still not breaching legal requirements of 10 LUX for bicycle headlights in germany. May also have been due te crappy generator i had at that point…

To the bad bits of those ten weeks

The electrical system (i.e: anything lighting related) has been the most unreliable piece of shit i´ve ever encountered.
The generator had issues applying enough pressure to the tyre, leading to it sliding across the sidewall (Is it called sidewall as well on bikes?), making a HORRENDOUS squealing noise and not generating anything. And once it did grip, power generation was miniscule…
This coupled with what possibly was the least efficient headlamp design (halogens… duh…) led to some more spending and upgrading.

Thus the purchase of a new LED headlight and generator followed just after the start of 2020.
Got those two bad boys installed less than a day later and it was a difference like day and night! (pun intended)
The generator ( 8EUR [ 9USD ] ) actually does stuff now, but quite a bit louder (the older one was near-silent, but useless), and a 70LUX Fisher headlamp (28EUR [ 31USD ] ) sourced from the local equivalent of home depot (BAUHAUS, for anyone interested) actually renders my bike legal as per german law. Plus i finally can SEE stuff when it´s on while not chewing through my tyres with the now plastic roller.

I am planning on converting to a wheel hub generator far down the road, but there is a second unrelated issue…

The entire drivetrain.
About a mopnth after installing all dem parts, a potentialy EXPENSIVE issue arose…
The chain is slipping somewhere, limiting me to about 40-ish% “throttle”, in every gear unless i am riding the biggest front sprocket. Then everything works perfectly fine…

Thus i´d assume the front gear set is mostly fucked. Taking the chain and subsequently the rear sprockets with it.

Current Verdict: Replacement of the entire fucking transmission system (front and rear gear sets; chain; rear derailer). At least according to the three bike shops i asked about this…

It currently is in the state of “liveable”, since the largest front gear is working fine, but the gear ratio in the lowest reasonable gear is too long for me to comfortably get rolling in…
Also i need mone to do the job, sooo… it has to work for the time being…

Anyways, hope you had at least some fun/ interest in reading this wall of text.