EEE - Evangel's (Not So) Extreme Engines

(Also, Alfa Romeo, you should totally hit me up some time.) 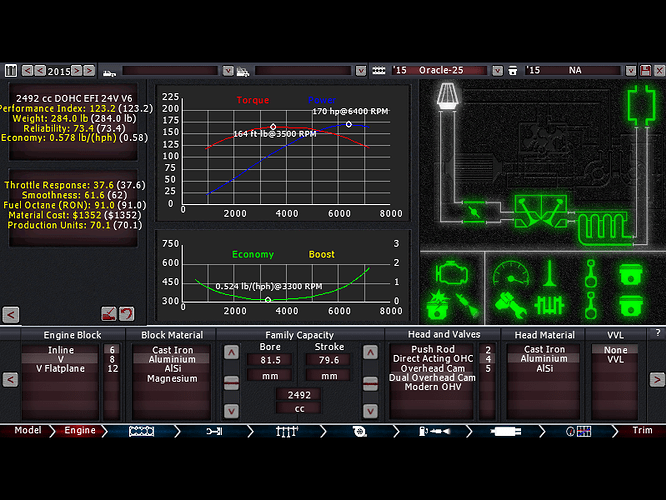 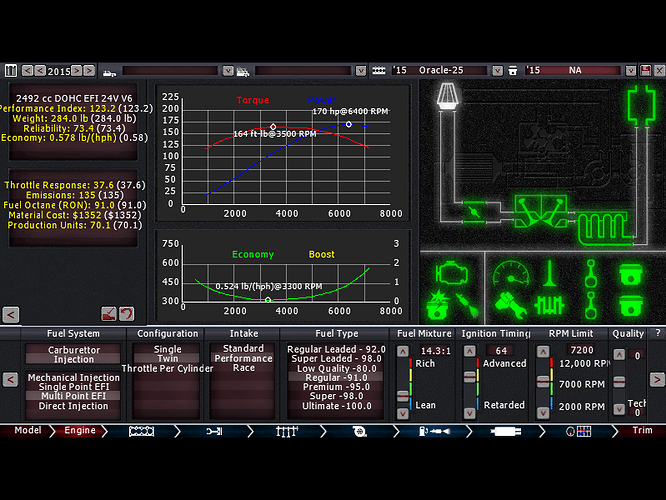 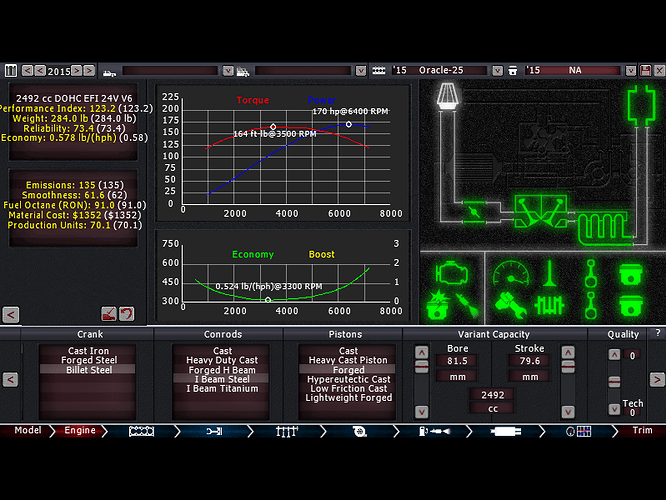 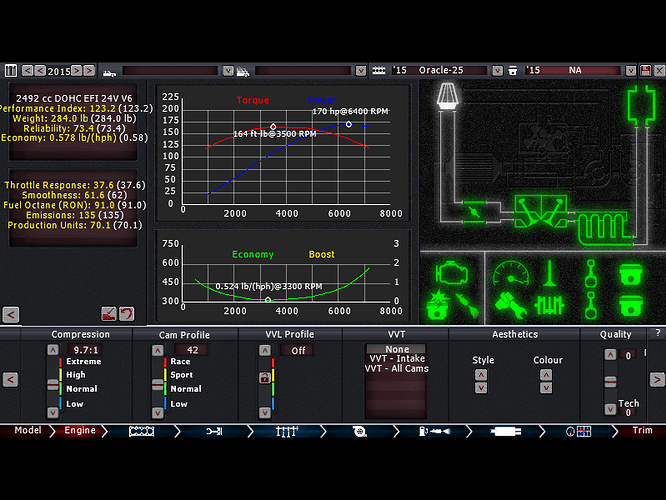 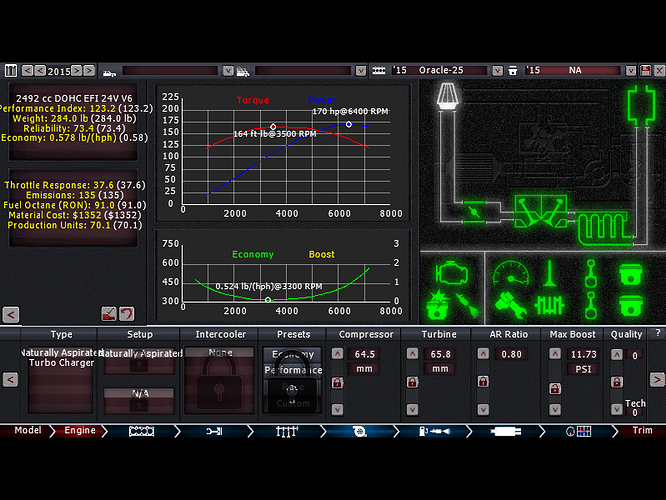 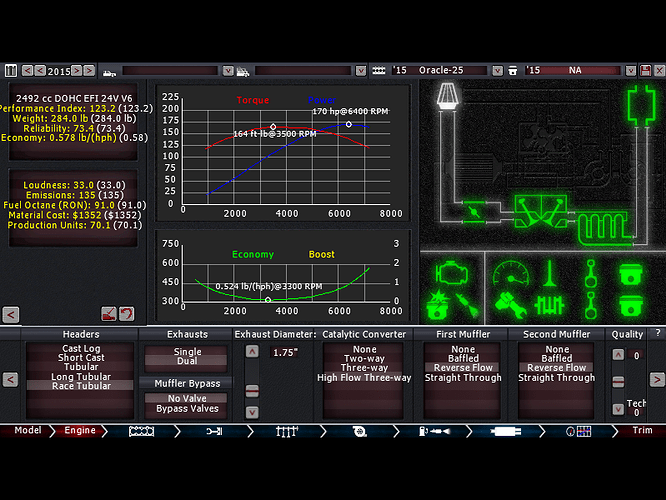 Sorry for two posts in such a short time, but here’s the Oracle Street-To-Track Performance 2.0L DOHC EFI 16V I4

I completely rebuilt the Vortex2000, and in my opinion, built a much better engine this time around. There’s a lot of slider abuse here, yes, but I only did so in areas that oddly DECREASED the price while improving performance. All that slider abuse and still more power for less money than the previous Vortex2000. It does have some reliability issues, mainly at the top if it’s 9500RPM range, but at 77.7, it’s still even more reliable than the Vortex2000, so I’m happy with how this one turned out. Go 100% Cam Profile? Lol. 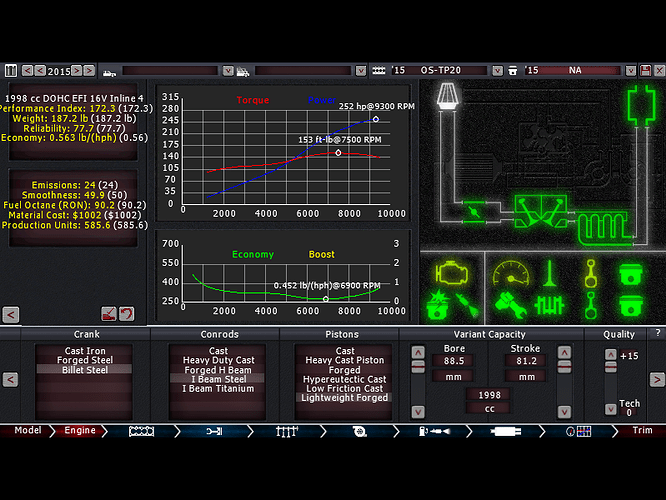 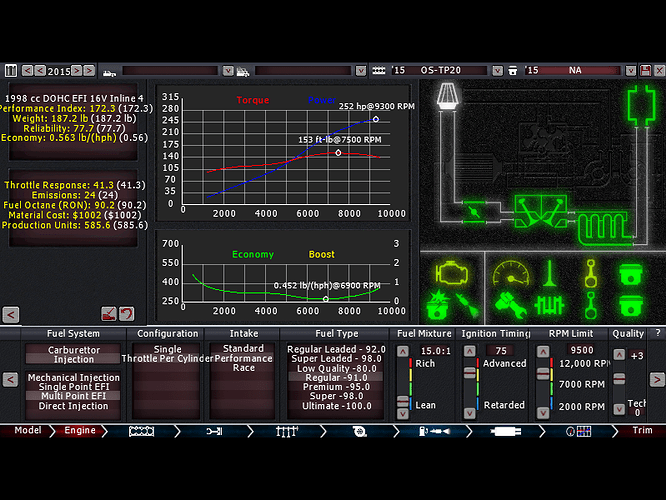 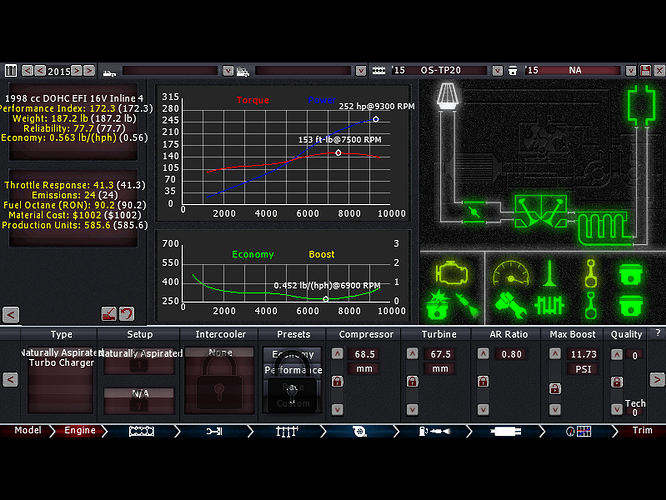 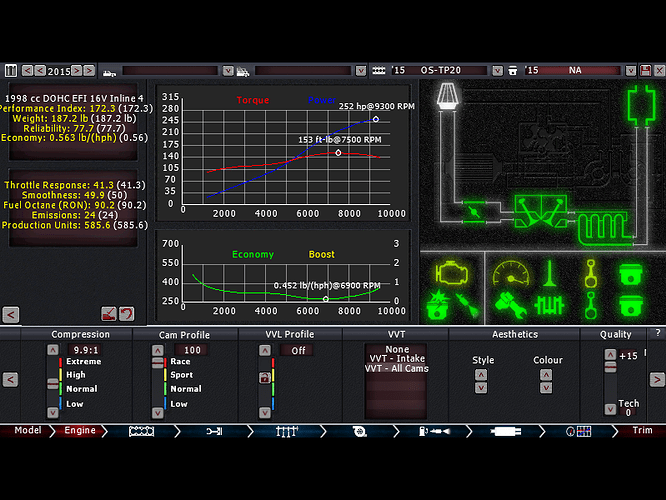 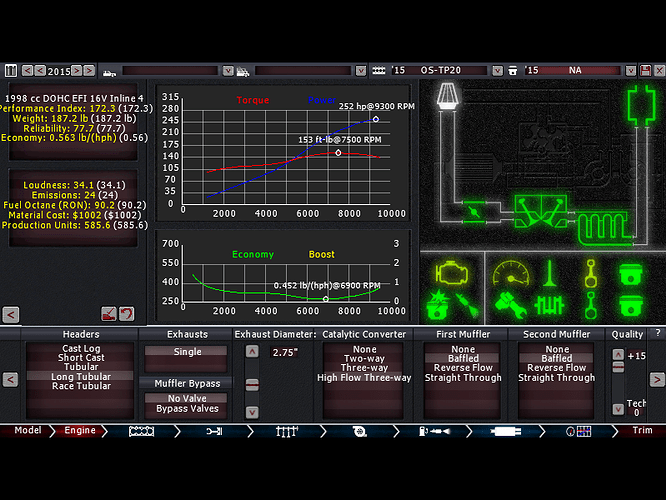 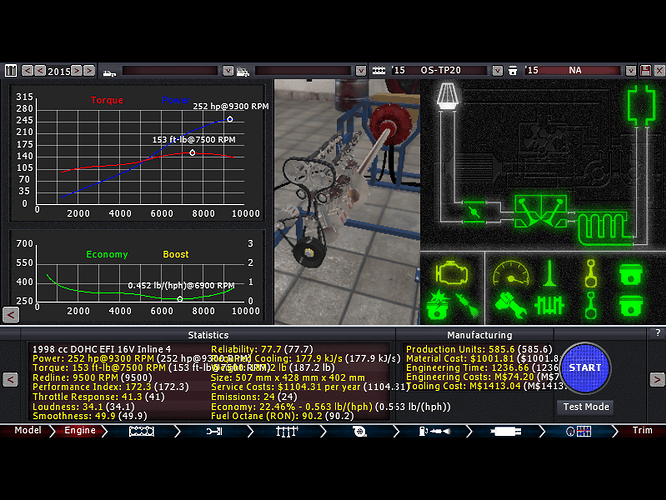 Slider abuse can reduce material costs, but it increases production units, which are arguably more important.

I don’t know what the production units do. XD

I’ll keep that in mind for future builds. I’m currently doing the 24 Hour Endurance V8 Scenario, and the only three things I haven’t met yet are the Power Range, Performance Index, and Responsiveness. Mainly because I was working on getting the economy down, now that I understand the game a LOT better than I did this time last week.

The Morikawa K-Street, named after designer Kenji Morikawa. Fairly cheap kei car engine design, and I didn’t mess with the sliders but very little, if at all on this engine. 62.8HP with a high rev limit (9500RPM), set as high as possible to maximize performance, yet minimize reliability issues. Morikawa is rumored to be starting up a small Kei Car racing series of sorts so smaller car companies will have a way to get into the world of racing and make a name for themselves while racing some of the bigger manufacturers without absolutely breaking the bank. 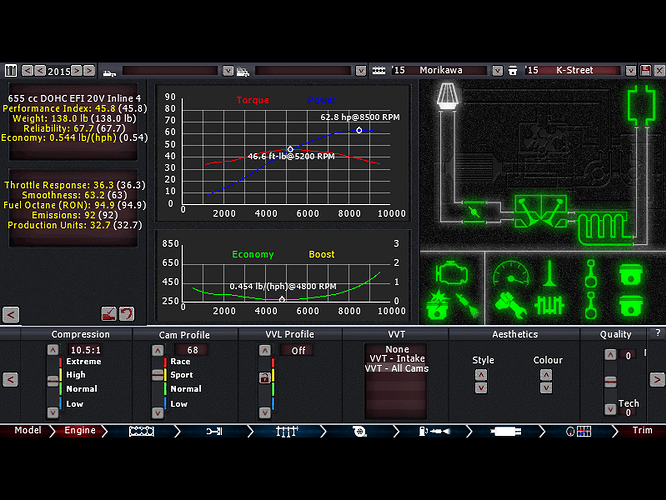 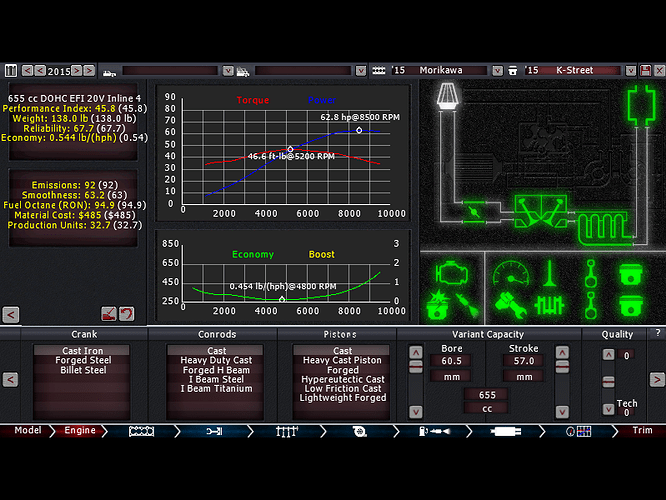 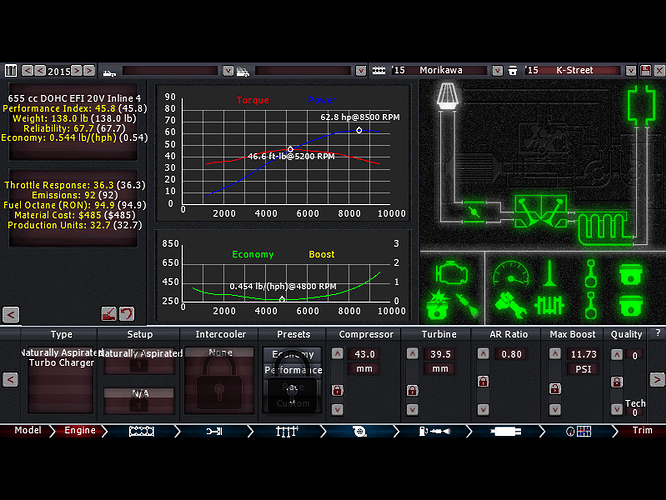 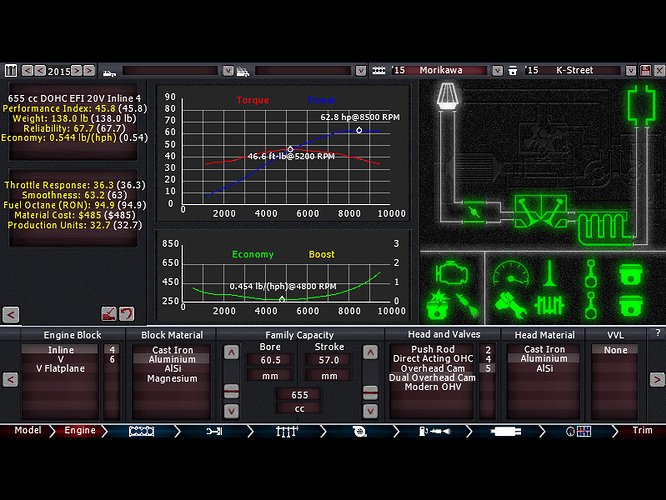 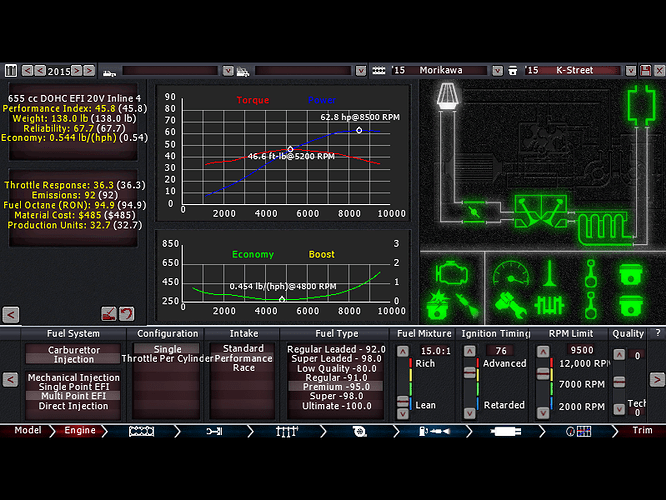 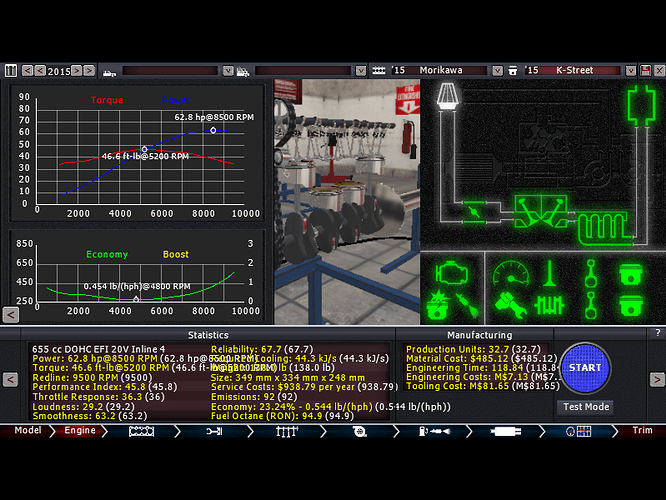 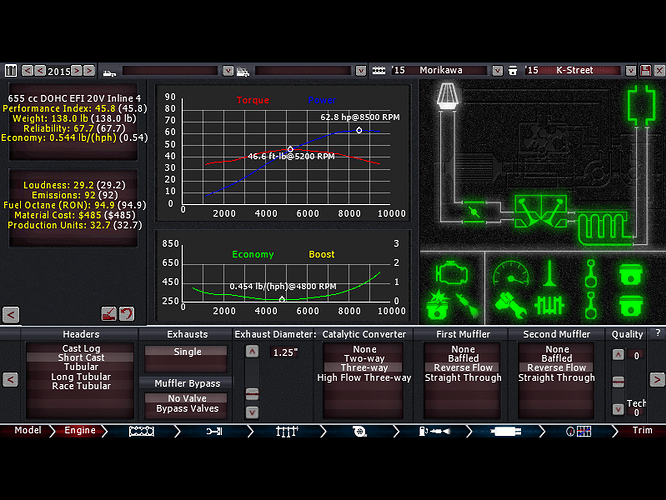 I play on a small resolution. My current monitor doesn’t go any higher than 1024x768 because it’s an old Dinosaur Dell monitor.