Hi all - are they going to be tweaking engine size limits? I’m a bit upset as I am trying to remake my favorite car (the FIAT 126p) in Automation.

I am making it with an inline 3-cyl of 652cc, similar to the actual car (I can’t do an inline 2 like the real car as those aren’t in Automation)…the engine used to fit fine in the older version of the game, but now it doesn’t fit the car body anymore despite being the same capacity as the one in the real-life car…it’s not exactly a huge engine…and I’ve tried to shorten it with a tubular exhaust and it still says it’s too long? Almost 200% too long??? That doesn’t sound right for this car…? 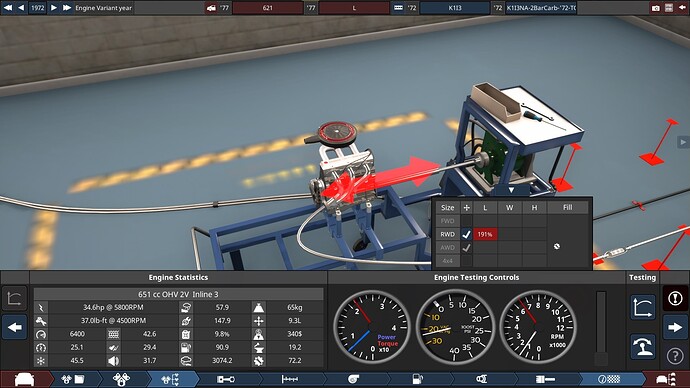 I tried shrinking it to only 400cc and it says it STILL doesn’t fit? What gives?

@Killrob I mean…I’ve remade this engine in the same engine location (rear-engined), engine size (652cc), and engine type (longitudinal) the real-life car that body style in the game is based on…so shouldn’t an engine modeled on the car in real life at least fit that car’s body style in the game?

UPDATE - There are NO rear-engine configurations that fit in this body type…Boxer is the closest and with it at the smallest displacement I can set the engine to, and with the body stretched as long as I can make it at the rear, a Boxer is STILL ‘143%’ too large…? Why does this body have a ‘rear longitudinal’ option if literally no engine in the game can fit in that space? I’m assuming this has to be a bug, right…? That’s completely unlike the real-life car that the body type is based on.

As there are well over 1000 car bodies in the game, we do not hand curate / check if the engine bays allow for all the correct sizes. It indeed does sound like this body is supposed to have a viable rear option but doesn’t. I’ll forward that problem to the car makers to see if there’s an easy fix.

And no, a 652cc I2 is significantly shorter than an I3 of the same capacity, but not THAT much shorter haha.

Thanks for the kindly reply @Killrob ! Yup, I know an I3 would be a little longer, but like you said, not THAT much longer…something’s not quite right though as SOME engine should fit, haha! Looking forward to an update that fixes it as I am weird and do love me some small Euro and JDM cars!

Sorry if I came off as grumpy in my post…I’m really not, just was having a bad morning! Cheers for all the hard work and efforts you devs do…still one of my favorite games after all this time, especially in conjunction with your tie-in to BeamNG! Happy New Year to all of you!

Someone else found it for me (hopefully), BodyEditor_70sMiniCar_Preview

I added 12.5cm to the rear length, which was as much as I could add without having a grill poke through the back. I can now place a 953cc i3 longitudinally in the rear, as well as a 2.1L Boxer, so lemme know if I got the right car here? I’m gonna submit the fix either way, but let me know that I got the right car.

Pretty sure that is the name of the car body file yes, though I am not home to check in the game in the moment for sure. If you look up the car on Google and compare it to the file in game, it should be pretty obvious!

Just checked today - yes, that is definitely the right car file! Thanks for submitting the fix and looking into it for me!