Event Horizon started life in the early 1960s as Norfolk Engineering Ltd., a small 6-man operation dedicated to motorsport engineering. For the first 2 years the tiny company operated out of a small barn in Stalham, north of Norwich in Norfolk, UK. They worked on advanced new fuel systems, suspension layouts and rigid chassis designs but found more failure than success as their manufacturing capacity simply wasn’t up to the task of providing components to most modern motorsport teams in F1 and F2.

1966, however, brought a major shift in Formula 1 regulation and a focus on driver safety forced a number of constructors to seek effective ways to marry a strong rigid chassis with a new style of immobile aerodynamics. Event Horizon had several unique chassis design technologies at the ready and supplied 4 of the top 5 constructors including Brabham-Repco, BRM, Lotus and Cooper-Maserati with components crucial to their success. A company was born.

In 1970, Norfolk Engineering re-branded itself “Event Horizon” and would take its expertise in motorsport (plus some seed capital) and attempt to take on the consumer automotive industry. While the first few models were met with critical acclaim, they failed to truly capture the hearts and minds of anyone but the true automotive enthusiast and sales were modest at best. The fuel crisis in 1973 failed to sink the niche automaker but also failed to provide a boost in sales, despite the introduction of a high mileage model which was introduced in 1974.

1979 brought about the first truly successful Event Horizon model and strong sales extended beyond the UK, Europe and Austrailia to the US, where the sophistication of European coachwork over brute force muscle cars was beginning to take hold for a growing segment of buyers.

Since its inception, Event Horizon has been a mark that provides a premium and decidedly British perspective on the consumer automobile - sometimes to a fault, as some journalists might quip. While the mark isn’t an ultra-exclusive brand like Bently, Ferrari or McLaren, most models do carry a price tag that is more dear than a typical budget saloon - though low cost models have been test-marketed and even sold with some measure of success in certain markets.

In 2009, Event Horizon purchased a controlling stake in a small Italian exotic car manufacturer - Vento Automobili - and has promised to continue to produce both world-class exotics and more approachable purpose-built sports cars under the mark.

Event Horizon has maintained it’s racing heritage and is still active in motorsport. It supplies power plants, chassis, braking and suspension components to dozens of motorsport teams in disciplines ranging from Touring Car championships to Formula 1.

Below will be a few misc. pieces of Event Horizon history. 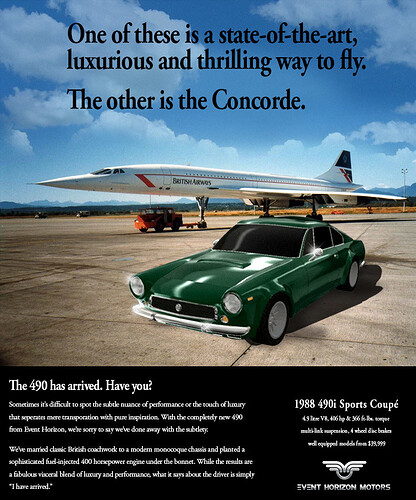 A promotional poster for the new 2014 Vento Automobili Breve, alongside the Cenno (introduced in 2012). Vento is a subsidiary of Event Horizon 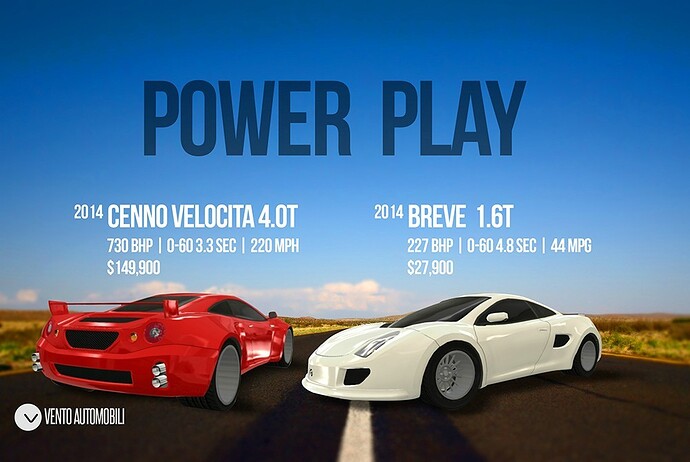 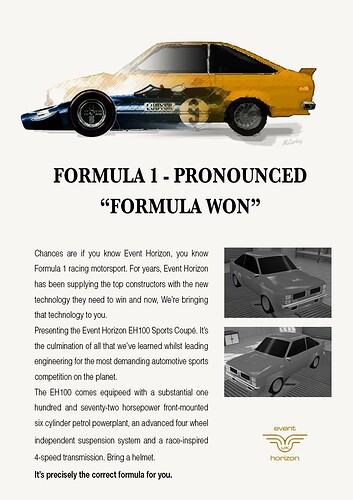 Event Horizon’s production car debut played heavily off of the company’s roots in Formula 1 racing. While the car was well received by automotive critics and enthusiasts at the time, high maintenance costs and a premium price tag of nearly £3,200 ($9,500 USD) kept the EH100 out of the hands of the broader buying public.

The car was equipped with a 2.6 litre dual carburetor 172 HP inline 6, independent suspension and sports tyres and would rush to 62 MPH in a blistering 7.1 seconds to an eventual top speed of 138 MPH. Now revered as a classic British answer to American brute force muscle cars, few examples of the EH100 exist.

Very creative format! I really like reading your posts! Also, I quite like the design of your first car, the 490. It’s very clean

Just chiming in to say: this is awesome!

Great ads! The font choice and ad layout is spot on for the time period

These are fantastic! Did you come up with the Concorde bit yourself?

I’ll have a few more coming soon… the game is just so great that even at this stage it’s a bit inspiring on its own.

I’ll admit to a bit of an advantage in the graphics areas; I’m in the business and i’ve got access to quite a bit of software and fonts… Clearly though I’m not the best car company CEO as my 490i design actually lost money in the last forum challenge.

lovely game though… and a great community as well! 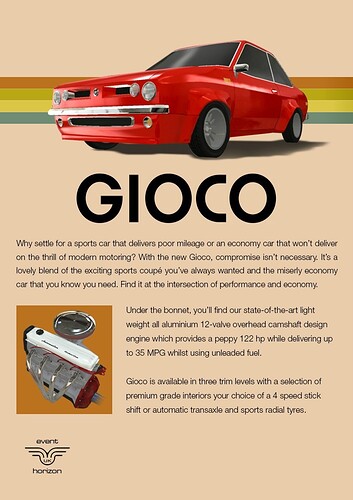 The Gioco was initially conceived as a lower cost follow-up to the EH-100. It would have featured the same, powerful 6-cylinder powerplant but with reduced specifications in interior, braking, tyre and suspension. 1973, however, brought a massive global fuel crisis and automobile manufacturers scrambled to meet new customer fuel economy needs.

Event Horizon was already working on a new 3 valve all-aluminum 4-cylinder efficiency-tuned engine design and it was determined that the Gioco would adopt this powerplant and be positioned as a fuel-efficient sports coupé.

In 1974 the Gioco was launched and met with mixed reviews.

While the enthusiast community liked the 2.4 litre 4 cylinder engine for it’s respectible supply of torque (135 ft-lbs), the fuel saving tuning left it lacking in horsepower (122 bhp) as compared to its similarly priced competition, who at this point were sporting 6 and 8 cylinder power plants capable of nearly 200 bhp.

While it certainly outperformed the emerging econo-boxes, the Gioco was priced higher and, unfortunately, failed to capture the hearts and minds of the enthusiast buyer en-masse. Despite the shortcomings, the car actually turned a modest profit for Event Horizon and helped to fund the development of its more successful future models.

These are awesome. I’ve reposted them everywhere, keep making them and I’ll keep reposting them.

love the game and looking forward to getting into it even more… more to come.

love the game and looking forward to getting into it even more… more to come.

Excellent, I’ve been showing them to game developer friends as and example of how our community does the coolest stuff

In the late 1970s an entirely new monocoque 4-door platform dubbed the Rapide AR was designed along with a pair of advanced new engines; a 2.9l SOHC 18V I-6 and a 3.3l DOHC 32V V-8.
Both engines featured all aluminum multi-valve overhead camshaft designs (which at the time was an advancement in itself) but they also included a mechanical fuel injection system and a turbocharger which allowed them to achieve impressive stats on paper as well as own the title of most advanced new vehicle one could buy. 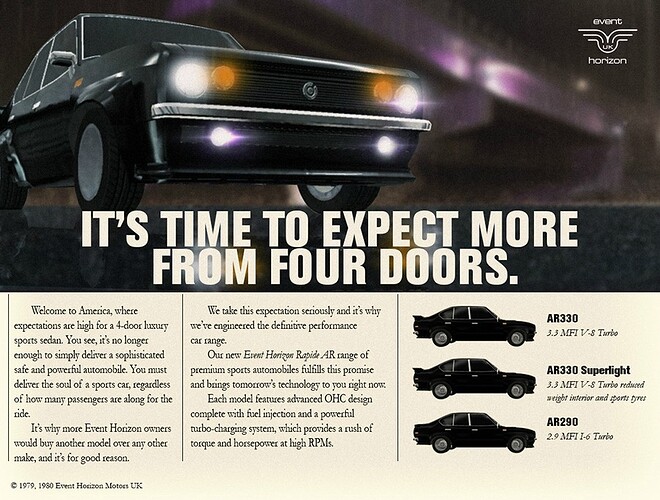 The new range consisting of three vehicles; 290, 330 and 330 Superlight, arrived in 1979 and were met with a warm reception, especially in the North American markets, though the term “turbo lag” certainly made the rounds in most automotive journals.

A limited edition variant of the 330, the 330 Superlight, was the darling of the automotive press and possibly the catalyst for the success Event Horizon saw with the range. 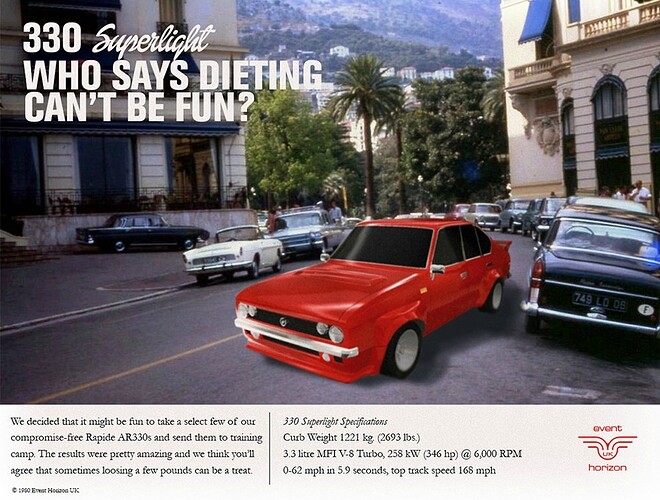 An ad for the 330 Superlight

Limited to just 1,000 cars globally per year, the 330 Superlight featured a reduced weight interior, stiffer suspension setup, semi-slick tyres and a modified close-ratio 5-speed transmission which rocketed the car from 0-60 faster than a Ferrari 308 GTS. While the rough ride and minimal interior didn’t make it an ideal daily driver, the enthusiast community lined up to own one.

The standard 330 model definitely benefitted from the attention the Superlight received as it looked nearly identical and was powered by the same engine. Of course, more than a few 330 owners attempted to retrofit their vehicles to mimic the Superlight.

You, Sir, have set new standards for advertising models in Automation. I am stunned.

I’ve finally chanced upon this thread (lured here by the Test Drive: The Duel profile picture haha), and I must agree these adverts are fantastic! I tip my hat to you good sir!

Those Ads are simply amazing! I really liked them!

One question i have : Some people are talking about a way to remove the background in-game on those pictures. How can i do it?

[quote=“LoucurasdoPortal”]Those Ads are simply amazing! I really liked them!

One question i have : Some people are talking about a way to remove the background in-game on those pictures. How can i do it?[/quote]
viewtopic.php?p=47003#p47003
It’s ~ button to open console though.

[quote=“Janekk”][quote=“LoucurasdoPortal”]Those Ads are simply amazing! I really liked them!

One question i have : Some people are talking about a way to remove the background in-game on those pictures. How can i do it?[/quote]
viewtopic.php?p=47003#p47003
It’s ~ button to open console though.[/quote]

EDIT: I’ve just tried to do it, but absolutely nothing happened. The same problem as the guy in this other topic. Oh geez…