F1 engines, because why not?

Sharing engines doesn’t seem to be very popular lately and I always feel like I’m the only one who likes making racing cars, so obviously I decided to combine these two things and am now sharing a racing engine I made. 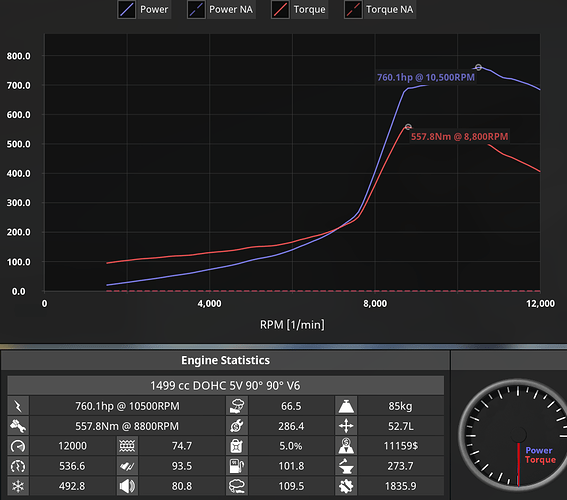 All the necessary info is in the pic, any details about how I made this I will keep to myself because I feel somewhat proud about my creation so I don’t want everyone copying it.

It seems to me that your motor is influenced by SURGE STRESS, also, I could not identify your motor as an F1 motor. Especially since according to the latest FIA regulations, brands already have engine development under 950hp and revs up to 15000 and there’s nothing scary with that. Besides, the times when everybody was bragging about their engines are over.

I could not identify your motor as an F1 motor. Especially since according to the latest FIA regulations

You clearly haven’t read even half of the post.

brands already have engine development under 950hp and revs up to 15000 and there’s nothing scary with that.

Besides, the times when everybody was bragging about their engines are over.

Don’t disgrace yourself in your dilentantism.

I wonder where you got your conclusions from? Have you finally learned to write after all these years? Also, peak performance in real engines usually never occurs at the end of revs. Looking forward to seeing your engine in the studio!
Just because you know how to swear, it doesn’t add to you authority!

It may seem annoying, but it’s easier to track IMO that way:

I wonder where you got your conclusions from?

You mean, that you haven’t read the OP? Well, it clearly states it’s NOT a modern F1 engine, and yet you compare it to the modern regulations. No point in that if you’ve noticed that info.

I have no idea what you reference here, the engine in the OP does not have peak power at the redline, I haven’t mentioned such engine, in fact I don’t see such mentioned anywhere (no, my antique F1 doesn’t have that).

All the rest - just because you pack your posts with fancy words doesn’t mean you can judge everything and everyone all around and act as some kind of an Automation oracle of design and engineering (especially the latter, seeing reviews of your cars). And if you haven’t noticed - the swear wasn’t directed at you, it was my expression of utter confusion.

OK, even though you don’t write much, you are good at noticing important numbers. Let’s put that down to my inattention. But I still don’t agree that engine performance should look like that. I will try to build a motor with 12 thousand rpm and 950 hp and if I succeed, I will post it here. However, I can’t promise success - this task is already a challenge in itself.

It has 0,5 % surge stress, no mechanical stress, no RPM or torque stress either.

Especially since according to the latest FIA regulations

I said it is made to 1988 rules. I don’t have a rulebook so the best I can do is Wikipedia and whatever rules I find online. According to Wikipedia the most powerful at the time was the Honda at 685 hp, so I’m way above that, be it realistic or not. I have another version with 766 hp so an extra 6, but that weighs 20 kg more and has almost 30 Nm less so I consider this version to be better

Besides, the times when everybody was bragging about their engines are over. 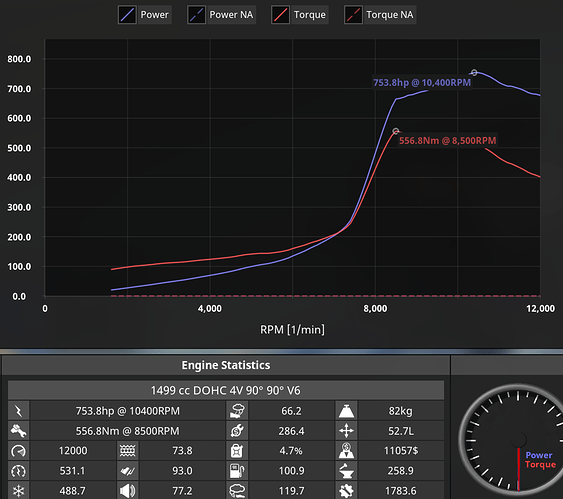 It definitely is, and the power/torque curves are generally steadier than before.

My smartphone cropped the picture to 10,500 rpm, so I decided that the graph ended at 11,000, which meant the motor was more limited in performance and proper assembly.
Your motor is absolutely fine, I’m currently studying the 2022 FIA regulations to build my F1 too.
And that engineering is really quite challenging, and I congratulate you on the fact that you managed to squeeze 760 hp out of a 1500cc!

I take back my words!

I got the 4 valve to 760 too. Turns out with less valves the turbo doesn’t explode as easily so I was able to have more compression/timing

Yeah, no worries. I wouldn’t build an engine with the peak power at redline, I hate it when all the YouTubers do that 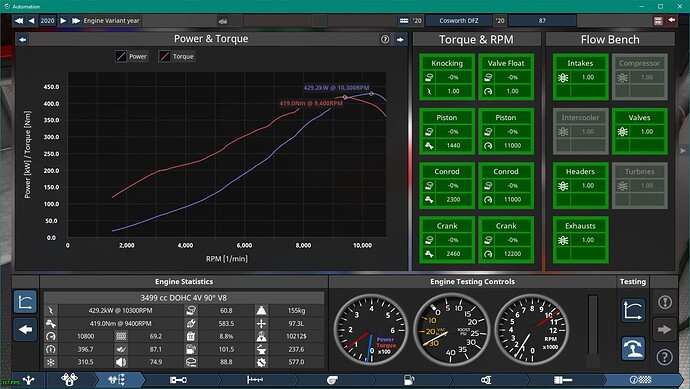 How about a Cosworth, as used by 8 of the bottom 11 teams in 88? This is the 87 spec, but bumping family quality can get the requisite numbers there

I was looking through the wikipedia page for the DFV and in the section for DFR it says it used direct injection. I had no idea that was already used in 1988/1989 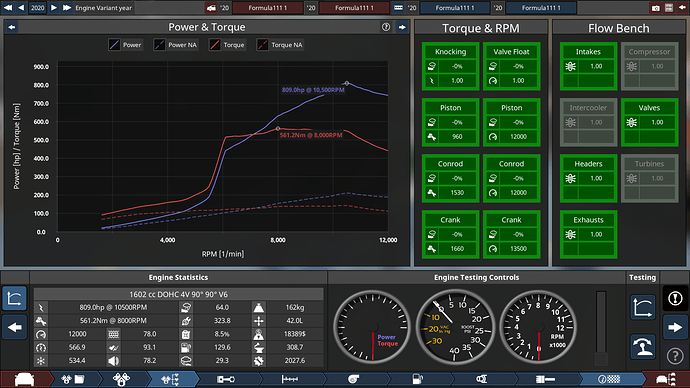 I started to develop an F1 car for racing, and later you’ll be able to evaluate it.
The motor failed to reach 1000 hp, although according to some reports it is known that very many racecars have reached this mark in 2021 year. Perhaps it’s the limitation of Automation that’s affecting it.
I make it as strictly as possible according to the 2022 FIA regulation, with some interpretations and adaptations, and in the future I will deal with aerodynamics and appearance.