Here is the home of the Singapore Grand Prix, the Marina Bay Street Circuit measuring 5.065km (3.147 miles). I’m only about 95% certain about the map route and elevations for this track are nonexistent due to so much ground clutter associated with street circuits in Google Earth. I tried watching videos, but it didn’t work out so well, so for now it is completely flat. Other than that, this is a pretty OK track. 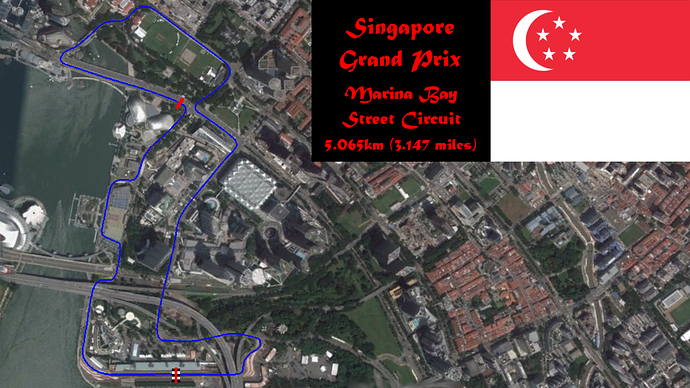 According to the F1 games and from what I remember, this track is flat, with insignificant or non-existent elevations.
By the way, you said you couldn’t find reliable data for Monaco. What sort of issues do you have, is it elevation or the actual design of the track?

Both, actually. It is the only (current) F1 track left to be done. I tried making a track image, but couldn’t figure out where the line goes through the city. I will probably just use the wikipedia overlay image over a picture of the area, I guess. But elevation data (I know there are changes on Monaco) is non-existent.

About the track elevations, I asked strop for the page he used for his Pikes Peak track and it is this altitude.nu/

Edit: I managed to make this on google maps: goo.gl/maps/2hlf0
It isn’t quite accurate, because monaco is a maze rather than a city.
Only problems are around the Place du Casino, where the cars go around the otherside and the Piscine/Rascasse section at the end, but that one is easier to figure out.

I always forget about that site for elevations. Strop told me about it a while back, but after I reformatted my laptop, I lost the bookmark and just forgot about it. That’s pretty much what I have on my map, and those two sections you mentioned are the ones I was really having difficulty with.