I was just wondering if there are more people running into this problem with the opt in beta of the lite campaign V3.

So basically what happens is that none of the models that I make a facelift of will continue to sell after re-engineering and re-tooling the factories. The facelifted cars are being produced, stock does build up, but their desirability rating will not show a number anymore. Just a blank green color. When checking the desirability overview none of the numbers show up, only empty colored boxes.
When hovering over these boxes the desirabilty rating and demographic does show up.

After re-opening the save game all of the build up stock from the facelifts is gone and also all of the desirability is gone. Also the cars do not seem to be produced anymore at this point. Although it does indicates to be using factory shifts which sometimes change. The sport variant does continue to sell normally but this is the only car that wasn’t an active part in the facelift (alos see screenshot below)

I have watched the tutorial and I have been watching Killrobs letsplay, but haven’t seen this happening to any of the facelifts in them.

So, am I doing something wrong when face-lifting my cars or is this a (hopefully) know bug? 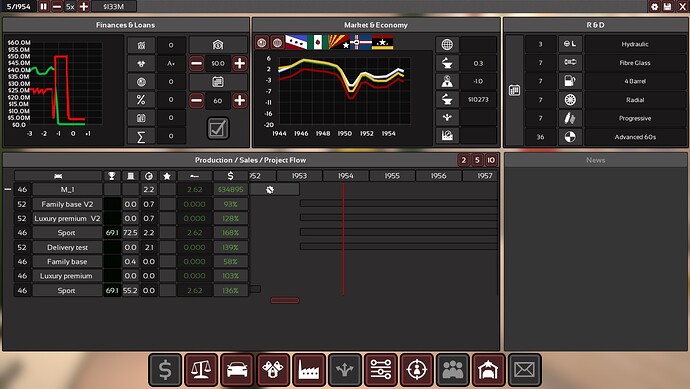 Do you facelifted the engines too?

I have had the problem when i facelift the car and the engine at the same time, the engines don´t sign off and they don´t work.

The problem seems to occur with all kinds of facelifts.

In all of these cases every variant which was involved with the facelift will not sell annymore afterwards.

Could reinstalling the game and deleting all save game files help?
Im running the game on 64-bit Windows 7 by the way.

I kind of fixed it for myself, although i still can’t facelift my engines. Only the cars work 9 out of 10 times but for now at least its workable. I would still like to know if anyone else has issues with facelifted cars which are not willing to sell.

if anyone else runs into similar issues, this is what i did.

Go to this folder C:\Users\AppData\Local\AutomationGame
and simply delete the whole folder with all of its contents.
Also go to my documents and delete everything related to automation. I had one automation game folder and one automation folder within the my games folder.
After that, uninstall and reinstall the game using steam and check the file integrity afterwards.

I would not recommend the fix you are proposing there, as it has nothing to do with the install of the game but a specific series of actions taken by the player. It is a bug indeed and the next big one we need to figure out once we’re back in office on Monday.
It has happened to quite a few people and I’m one of them in the Let’s Play. It seems to have to do with engine facelifts not actually signing off their factories, so that they are in limbo after engineering and cannto start to supply the cars trying to be produced. We’ll have to see what the cause of that is. Certainly nothing you are doing wrong, just something we haven’t taught the game to cope with yet!

If you have a savegame for us to take a look at where you either are in that state or can point to a simple series of steps on how to get into the broken state that would be very useful. You can zip up the savegame and send it to support@camshaftsoftware.com with a brief mention of what is going on (link to this thread) and if applicable a series of steps how to reproduce the issue.

I have prepared a bunch of save games where production doesn’t continue after facelifting an engine.
There is a Wetransfer heading your way, hopefully they help identifying the bug.

It appears that indeed the game doesn’t recognize engine facelifts to be singed off when facelifting them.
Tried signing of the engine factory and project multiple times but still got this error message which didn’t prevent me from continuing with the project though.

The only way to avoid this from happening is to not facelift the engine when facelifitng a car. I’ve tried everything but couldn’t get rid of the sing off warning. Even when not changing any sliders in the engine designer, enginering or factory settings it still said it wasn’t ready to sing off. 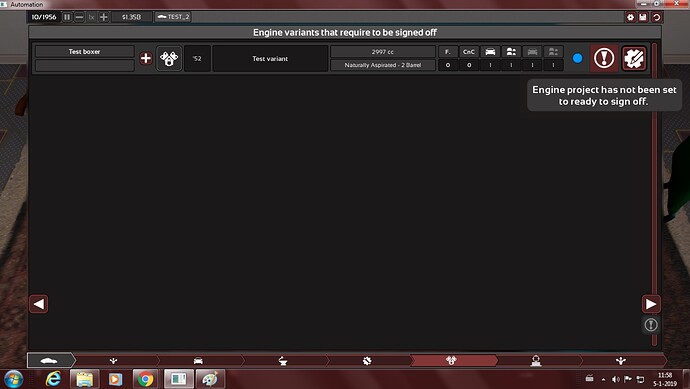 it’s a high priority bug for us to solve.
Cheers!

There seem to be quite the combination of issues here, I hope we caught them all.
We’re working on a new test version right now and I’ll see if it is fixed after that. We might need more feedback from you guys after the next patch though

The biggest problem for me is, the engines randomly don´t sign off after a facelift. They had a red sign engineproject manager, but there´s nothing i can do to sign it off. So the engine don´t come out and nobody needs a car without an engine