“Give in to temptation.”


Farox Motor Company was founded in Grand Rapids, Michigan, in 1965 as an American premium vehicle manufacturer. Marketed among the top luxury brands in the United States, Farox has competed closely against Silver-York and Taluvec for nearly its entire existence.

The current product range of Farox consists of traditional American sedans, crossovers, and SUVs. Outside of retail markets, Farox has produced vehicles for limousine and livery use throughout its entire existence, with several examples used as official state limousines for Presidents of the United States. Since the 2000s, Farox has increased sales outside its largest market, the United States. The division inaugurated dealerships in the Japanese domestic market in 2005, and shortly thereafter came Southeast Asia and Latin America Europe.

Since its inception, Farox has built its reputation around the making of high(ish) quality, luxury vehicles that are a pleasure to drive and give off an aura of professionalism and elegance. Additionally, Farox has focused on “traditional” American luxury, with RWD-based vehicles and an emphasis leaning more towards the comfortable side. The late 1970s brought the rise of the personal luxury coupe, and Farox did keep up with trends on making sportier, Euro-style vehicles, but the idea remains the same.

The rear end has echoes of the new NSX, and the lighting fixtures there follow a similar pattern to the front. All in all, a highly attractive proposition indeed.

Thank you! I used lot of the new mods from @l5o2k1s, to HUGE thanks to him! I saw them in the steam workshop and thought to myself that it looks like I had designed them, especially the grille. They were the exact thing I had in mind for Farox! 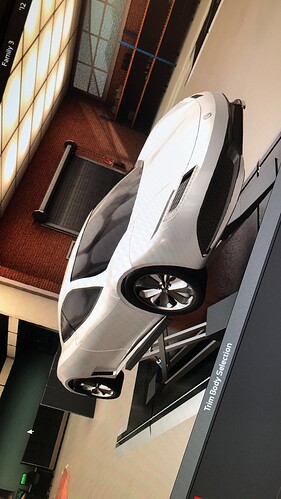 Just when you thought it didn’t get any better. 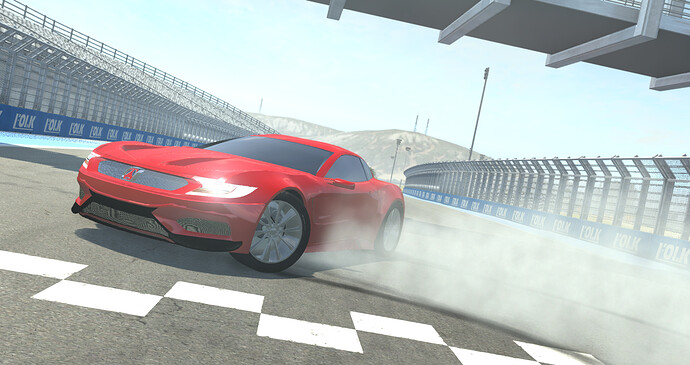 With an astounding 650 hp and 650 lb-ft from a twin turbo version of the standard 5.8L V10 paired to a shorter ratio 7-speed manual and AWD, the Omega can do 0-60 in 2.7 seconds and fly around the Belasco Raceway 4 seconds quicker. Test drive, anyone?

I would love to test drive the omega!

So I tried my hand into the pickup market and I think I nailed it. This is the Farox Arctica, which we’ve been making since 2002 starting in the 2003 model year. Sales have been strong, averaging about 560,000 units per year. 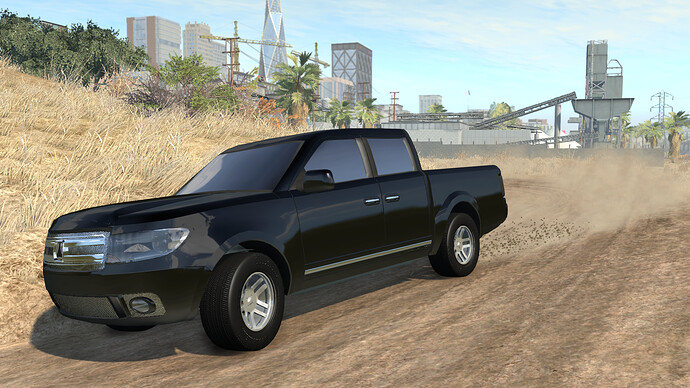 The first generation Arctica came out for the 2003 model year as a body-on-frame pickup. It featured an advanced suspension setup with independant front suspension and coil spring rear, making it one of the best riding pickups on the market.

Pair the advanced high strength chassis to a legendary, Toyota-level reliable Farox F9 series engines and a 5-speed automatic with 4WD, locking diffs and a low-range, you have the recipe for an amazing all around truck. 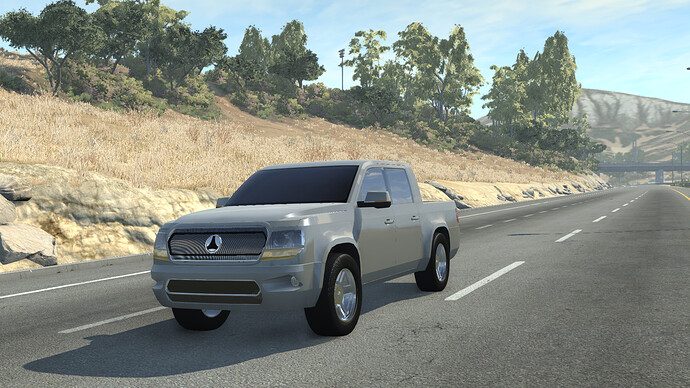 2009 marked the second generation for the Arctica. It retained the advanced chassis setup with some minor changes to make it stiffer and more driveable, and it recieved updated versions of the same line of engines. I’ll just leave it at that, and let you guys admire it

There are models available to test drive from our heritage collection if anyone is really interested. 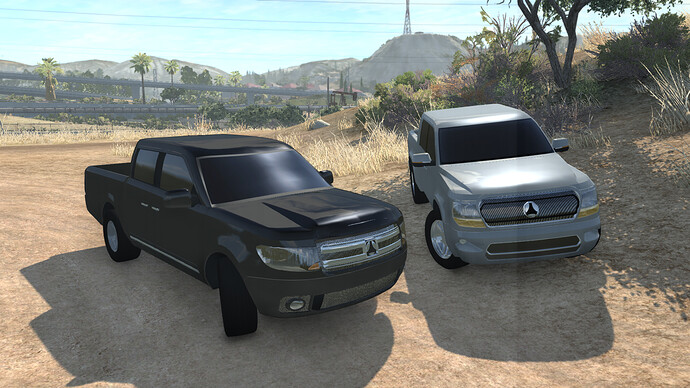 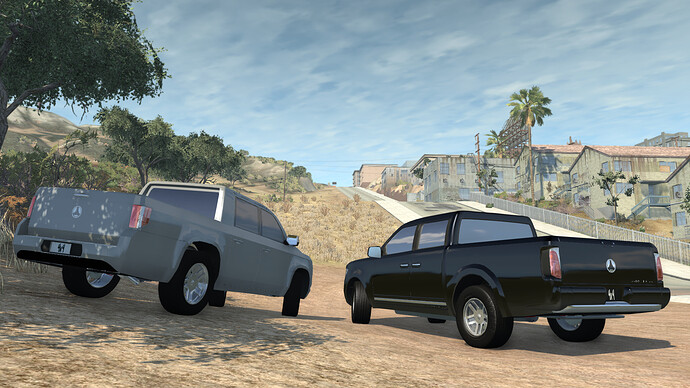 I really want to make some more lore, though simple it can still be done. But I also would like to make some modern designs to give a feel for what Farox is and to show off what we are. So I’m going to do this poll, let me know what you guys want! 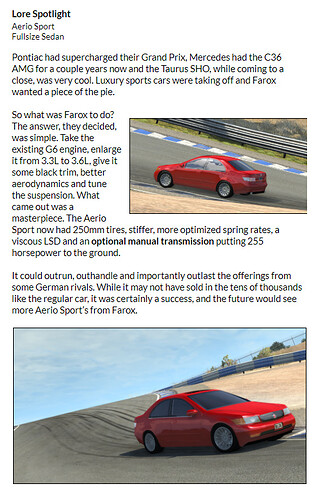 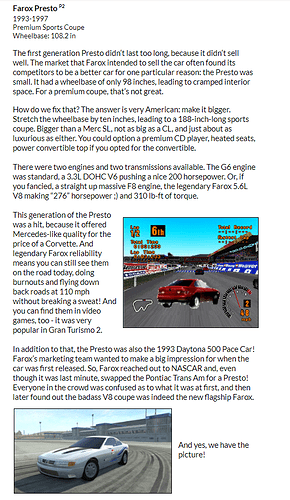 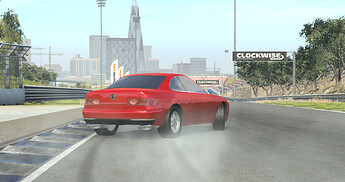 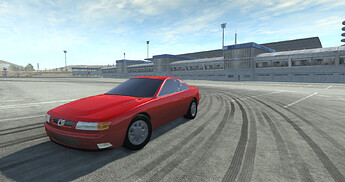 And if you’d like a closeup of the photos, here they are 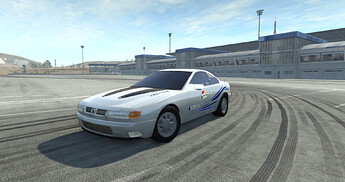 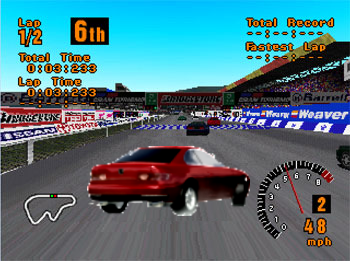 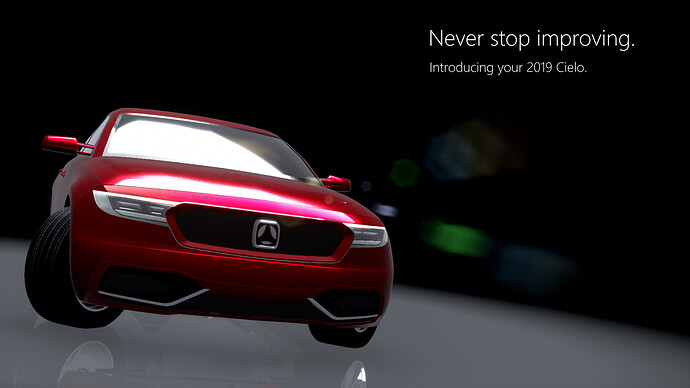 Is the cielo midsize or compact or full-size?

Midsize premium sedan! Equipped with a 2.0L Turbo returning 33MPG combined, while getting it to 60 in a respectable 7.5 seconds.

I see …“Phaeton” or “Phaeto” in your future …of course, I am not wearing my glasses but I am making a suggestion =) 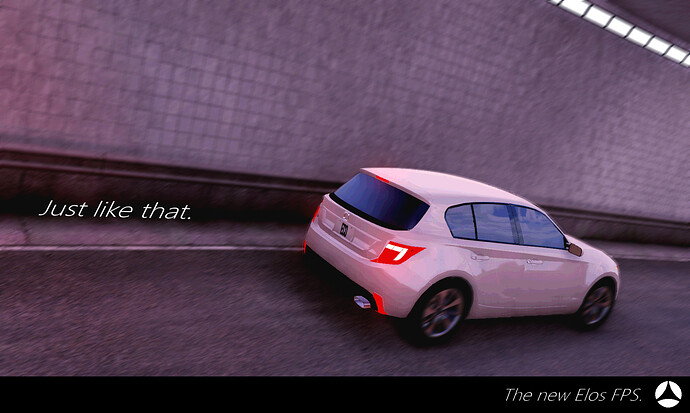 Nice car there! Maybe It can go head to head against the alaris

The Alaris is C-Segment?