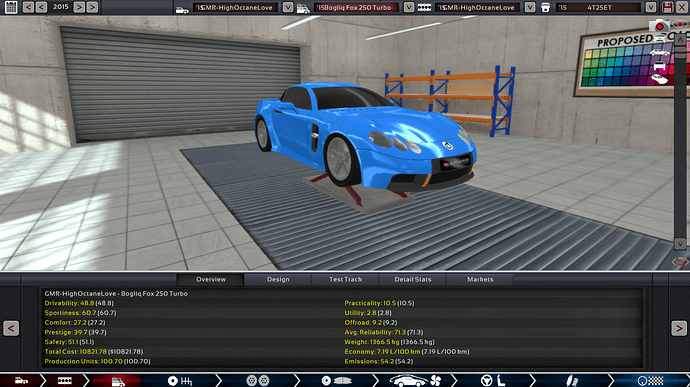 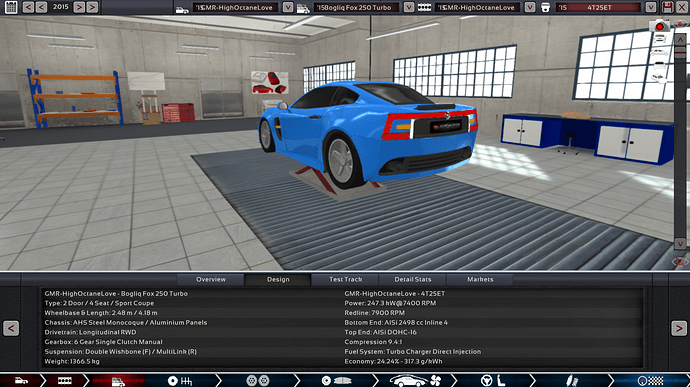 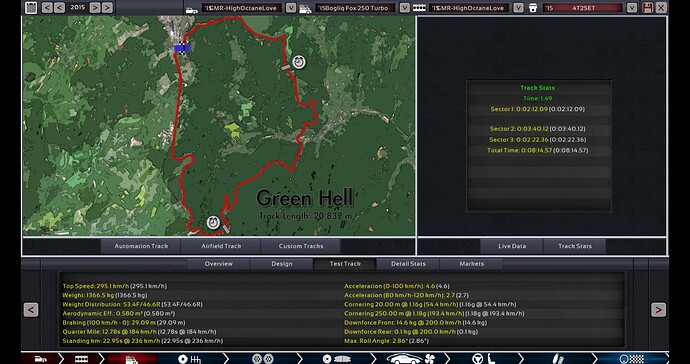 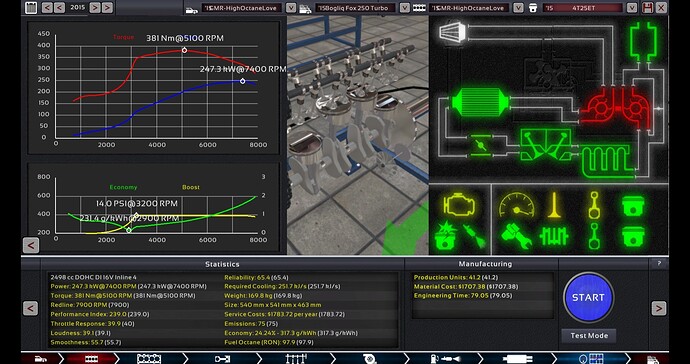 Developed to combat the Toyota 86, the Fox 250 also was produced in a turbo version so that the haters would cease to hate!

The non-turbo is, in my opinion the better car but it was too slow for the competition so the turbo car will be my entry for comparison purposes…

I’m off the grid for next 14days buuut am very intersted in exploring the possibilities. No lore but somehow known brand. So is there any negotatin space for deadline?

Yeah probably, knowing me I’ll be running late and haven’t finished writing the tracks by then so that’ll be fine lol

Albury CMS-20T: Return of an Icon

When the CMS-16 - the first mid-engined car produced by Albury Motors - ceased production at the end of 2012, it left a void that initially could not be filled. However, by 2015, it was becoming apparent that to some engineers employed at Albury Motor Racing (which was responsible for the brand’s high-performance models, including the Crusader), such a situation was untenable, and they set about developing a replacement. The resulting car, the CMS-20T, had a lot to live up to, especially since cost, emissions and economy constraints forced the use of a larger turbocharged engine. 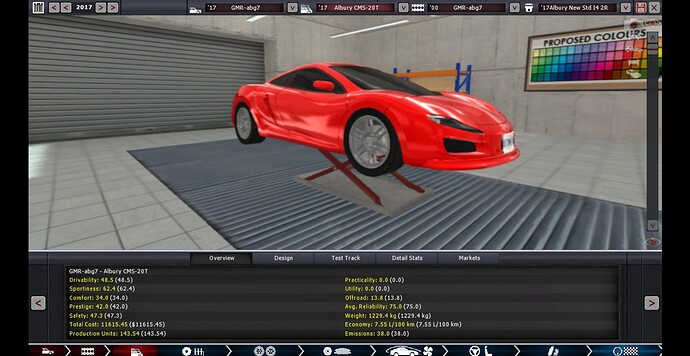 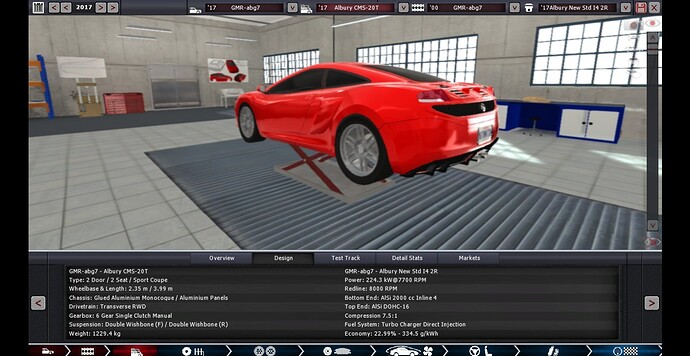 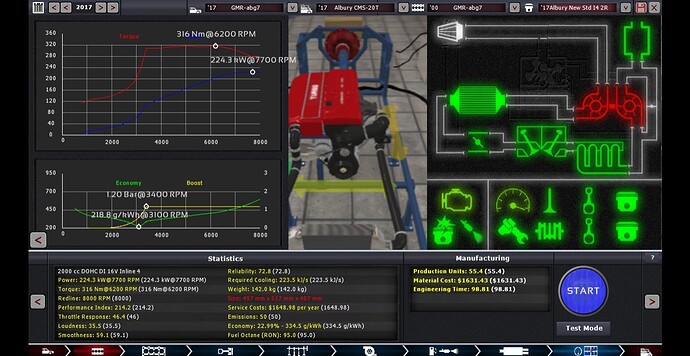 Powered by a tweaked version of the Albury New Standard I4, which now developed 300 horsepower due to revised turbo hardware, the CMS-20T recorded standing-start lap times of 1:20.52 around the Airfield Track and 8:15.88 at the Green Hell. At $19500 without markups (or $24375 with a 25% markup in place) it is shaping up to be one of the new performance car bargains of the era. The car is already on sale as of now, so what are you waiting for? Up to 4,000 examples will be built annually, so get your order in now!

We made the Pulga, a cute, tiny FF car. And we wondered something: could we make it fast?

We did so, moving the engine to the rear, to make it power the rear wheels (RR layout); reworked the suspension; swapped the engine for a beefier 170hp, 1.1L, turbocharged high revving beast. We also remade the body in carbon fiber and improved the aerodynamics. That’s right. Complying with the 45 security regulation, we made the car weigh 825kg. 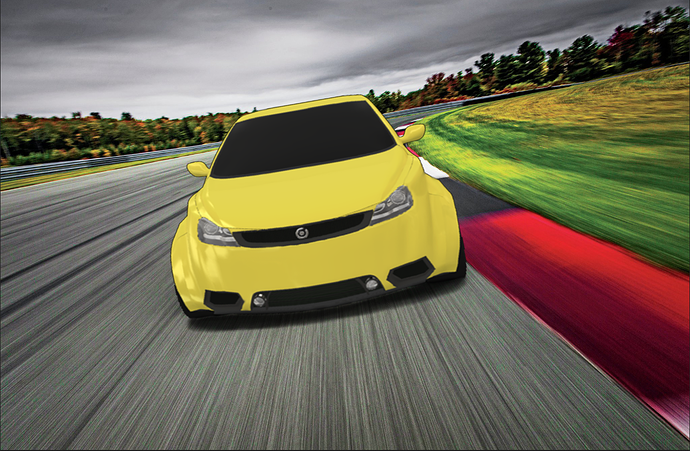 one will be given to Griphon Gear

How about a slice from the British sports car pie? 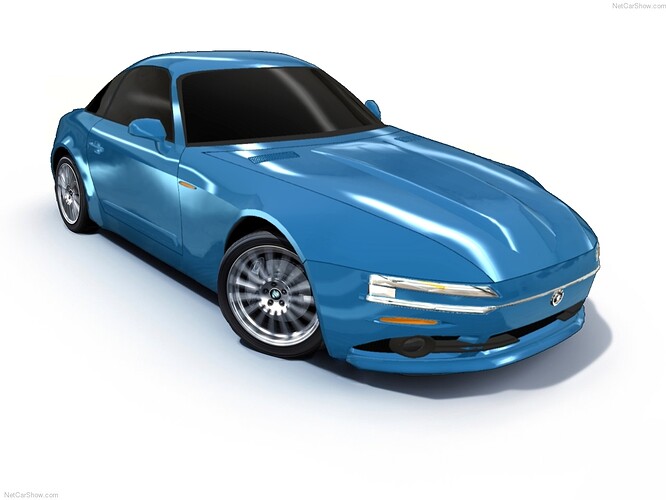 While one of the two tuned versions of the Merna might be more appropriate for an everyday car, the Nardella is the cheapest out-and-out sportscar Erin makes. All-aluminium construction, like its big brother the Scarlet, and powered by a N/A 2.0l i4 on this 200X trim, a style of engine that has a long history in our company of powering entry-level performance vehicles.

Per year, we expect total of production of around 6,000 to 7,000 Nardellas, with around 3,500 being X-Tune variants like this one. It’s built at our specialist low-volume production centre at the Erin World Headquarters on Brian Clough Way, Nottingham, UK.

So many entries already! Great!

I’m on a week of night shifts now (still sick

) so most likely I won’t get to scrutineering until after that. Just send them in whenever you’re ready!

The King of The Hillclimb Returns.

Not Delivery or primarily Utility or Cargo type vehicles

There goes the Bison and Boar

The Stryker Sinatra features a 6.2L V12, all wheel drive, an aluminium body, a premium interior and entertainment system, panoramic sunroof, and advanced safety. The Sinatra is not just a weekend toy but a car that excels in almost any scenario. The car is built for cruising across a continent carrying four adults and their luggage in comfort but is just as at home running laps at a track day or taking the kids camping for the weekend.

The Sinatra’s performance is staggering for any vehicle in this price range and yet even more impressive for a car weighing 4,100lbs. The wagon has set lap times of 1:18.8 around the airfield and 8:07 around the Green Hell. Despite its high performance the Sinatra remains eminently controllable in all weather and road conditions thanks to traction control, stability control, and of course all wheel drive. 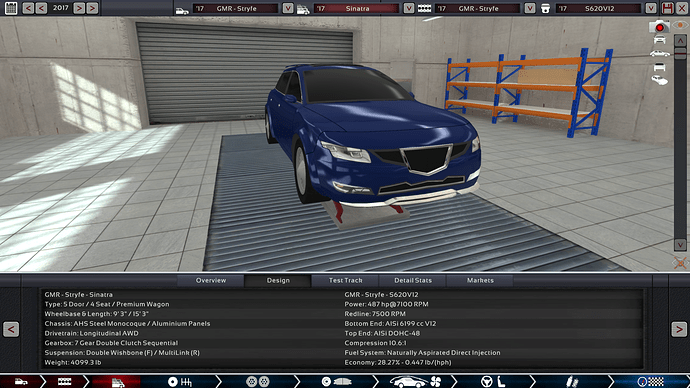 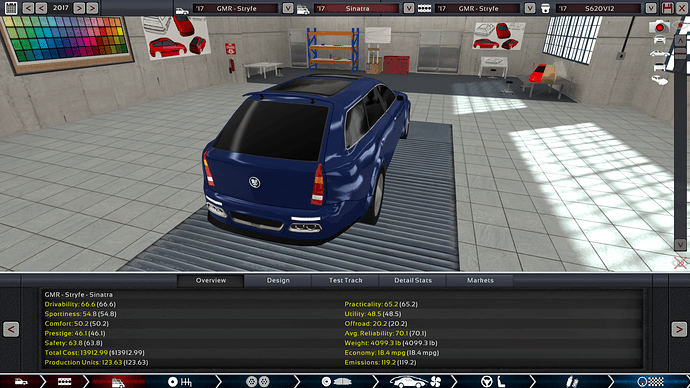 it’s safer, but has ended up weighing more. About 130kg more. Same as the concept otherwise.

Welcome to the club. We’re in the same boat again, it seems. (We should stop meeting like this)

You don’t think King of Drift tracks exist 1 hour before I start judging that track, do you?

It’s the same every time

##In any case.
Continuing partnership with Gryphon Gear on the experience exchange program, Kraft Haus Technik has sent 2 KHT Augustas to participate in the market research. The regular version and the Fruinia export street legal version, made to comply with the strict Fruinian law. The car is 100+ kg heavier than the original, but can be used legaly on the streets, unlike the original. The SL version is not available outside Fruinia. The original is available in Fruinia, but is only legal as a track only car. The latest Znopresk Reparto Performance output. (probably someone in the Iurlaro Skunkwork give some suggestion for the engine tune; no 200hp/l was done before this one.). 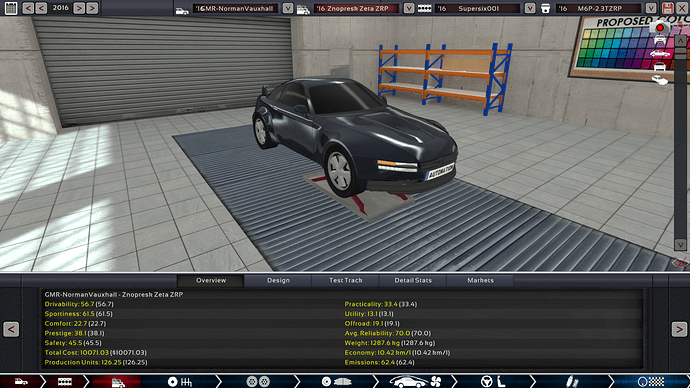 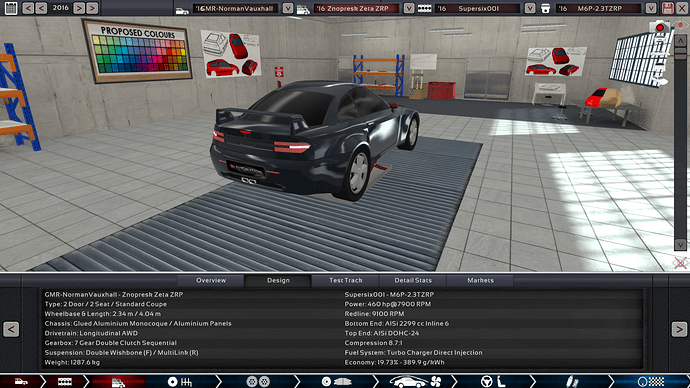 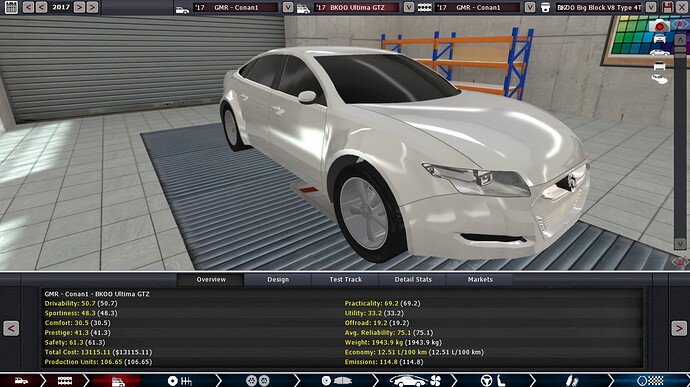 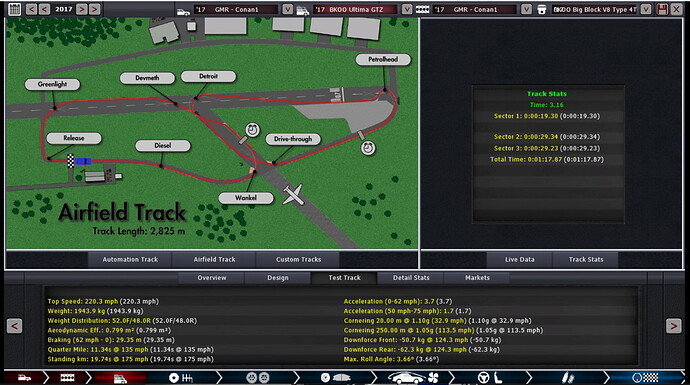 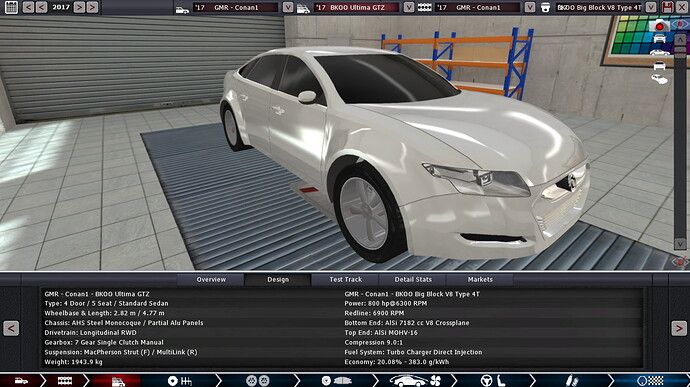 It’s basically a tuned up family sedan. Made using the body of a committee-designed BKOO Ultima. But fitted with V8 modor coupled with a couple of Turbochargers drivin the rear wheels. You can probably still burn the tires in third. The car was literally slapped together by the engineers who didn’t expect it to reach production thus low engineering time.

Challenge is 3 days old and I have 13 entries pending scrutiny, woah. I’m going to have trouble keeping up lol.

I started working on one, that would be DMA lore worthy.

Not my fault you described a car I already built

Everything else is in spec already even the fuel mileage, and I have gotten it up to just past 70 off road (better than most stock Jeeps) 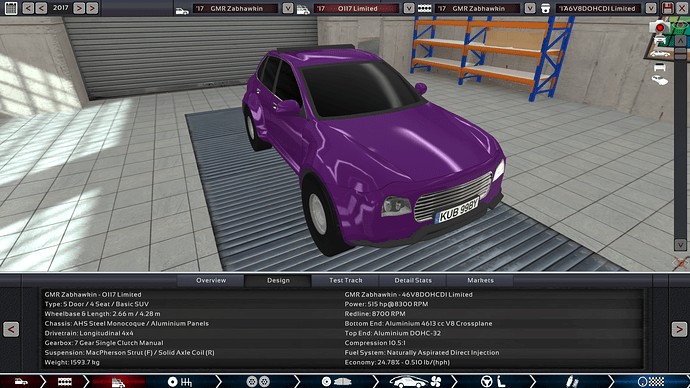 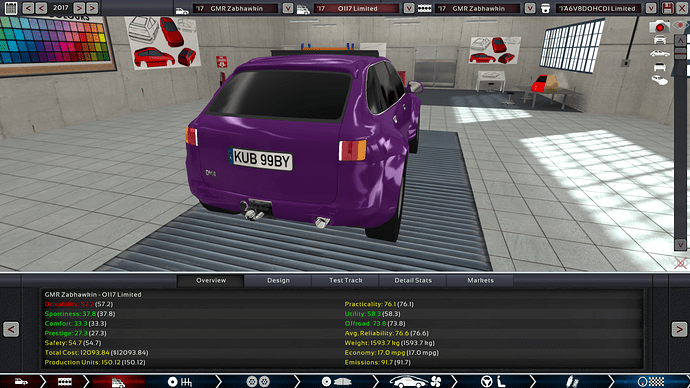 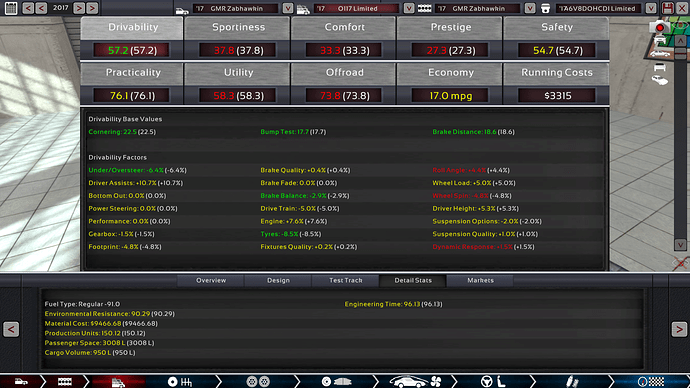 So what you get and many of these specs are not what you would normally expect in something meant to go fast.
31" mud terrain tires
Selectable locking differentials
Solid rear axle
3.2:1 low range
5000lb tow rating with the standard receiver hitch built into the frame
An interior that can be washed out with a hose (all electronics are sealed from moisture and dirt)
Quick release doors (no power windows or locks)
4.6 liter naturally asperated V8 with 515 peak horsepower
227 ftlbs of torque avalable at just 500rpm
Easy to replace aluminum body panels over AHS steel monocoque frame.

LOL it’s basically an extreme budget version of this: