As some of you know, GG recently teamed up with little-known Italian sportscar manufacturer GBF to see what they could do on a budget sports platform. It’s a very far cry from the ultra sharp, honed weapons of mass destruction speed and performance that we’re used to seeing from GG. But as I already mentioned, the whole idea of this project was to see what kind of stupid speed one could wring out of ‘normal-ish car’ production parameters.

To refresh your memory, this is what they came up with:

Some of you may also know that Motoring Man, Gavin Anderson reviewed the car and was somewhat baffled at the concept and execution. It would probably have helped to frame it as a kit car that emulates supercar performance for a very reasonable price. The main difference between this and kit cars is that it comes with a full-sized supercar styled body with air-conditioned interior, and uses an obnoxiously large engine, so it weighs nearly three times as much as both an Atom Ariel and Caterham Super 7. So what is it really? A pony car with a turbo stuffed into a supercar body?

Strop was baffled at Gavin’s bafflement. Despite knowing the joy of ‘slow-fast’ (thanks, Regular Guy), GG insists only on making fast fast, so offered fast-fast for the kind of price you might expect slow-fast, or comfy, or any number of other things. And that’s the thing. Now he’s worried. He’s worried that even though they’re only doing this as an experiment and that they’re selling it in low volumes, that it’s not going to be the gateway to their master plan of making all things fast at all budgets like the company envisaged.

So now it’s time to do some market research, i.e. the kind of thing you’d think a normal company would think of doing before they made a car and released it to the public. To be fair, GG never had to think about this stuff since they were always in the business of creating space in a market so rarefied it might as well have been a vacuum. But now they’re trying to sell a car that many people can actually consider buying, they had better start. After all, there’s quite a few good sporting cars from around this price. Erin, Rennen, Baltazar, Maesima, Revera, Armada, Matteo Miglia, Dragotec, Cavallera all should produce them, and that’s just to name a few.

GG has sent out an open invite to all known car manufacturers, requesting samples of passenger vehicles that can be sold for a certain price. The focus is on 2-5 seaters, and has a preference for the sporty, though that doesn’t have to be the car’s primary feature. If there’s any other company that makes supercar performance available at this price point, they also really want to know, as if the market can be hyped up through some competition, that would likely prove beneficial.

To this end, please submit a car that is:

Aside from that everything else is open.

##And What Is GG Planning To Do With These Cars?

Simple. Drive them, figure out what it’s like to live with them, what they’d be used for. How much and what are you getting out of your money, all for the purposes of defining how much living with 710bhp in a 2 seater is really worth (and whether it only belongs in supercars). Most likely we will be testing them out on our own proving grounds (which I haven’t even designed yet, uhhhhhh), but then taking them out for some real world testing. By way of illustration… 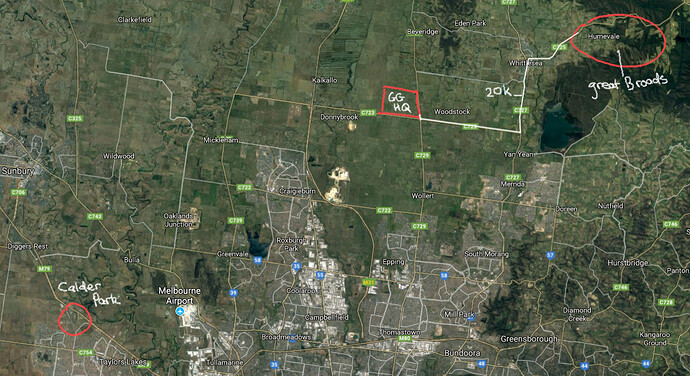 This is a map of the northern portion of Melbourne. Like most Australian cities, Melbourne’s pretty sprawley. The GG HQ site has been marked out. So too has a place called Calder Park, some 40 minutes away, as well as a quiet rural locale named Humevale, see the annotation “great B roads”. What’s so special about this place? It has a single lane road which serves as a really tight and twisty touge. The road where Strop first chased Kai while driving GG’s first prototype, Nightfury, but this is a side note. It makes for some real white-knuckle riding and it looks mostly like this: 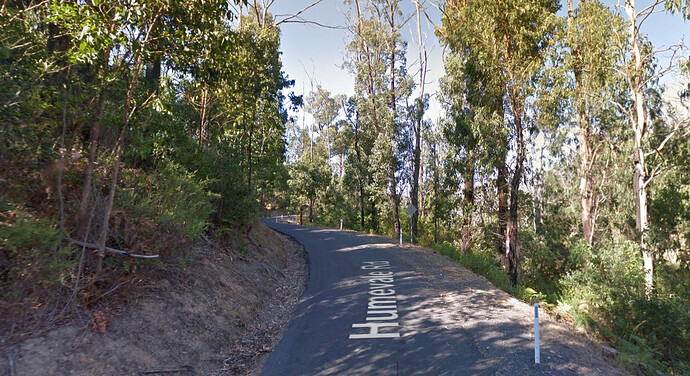 The full course would be 7.3km of hillclimb, and looks like this: 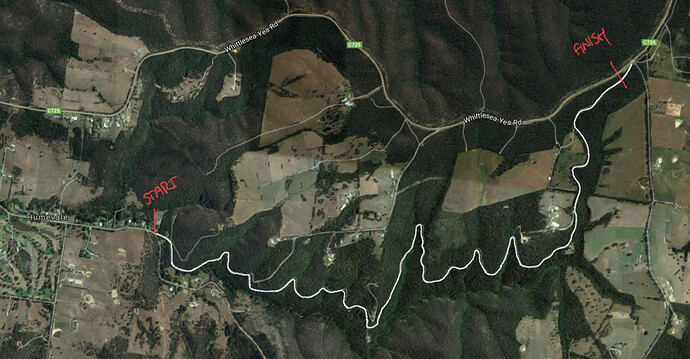 There are many roads like this in Australia and other countries besides, and any driver knows that they’re the ones with the thrills, so we’ll be thrashing all the cars through this. The time will be one thing, but seeing just how much of the car’s potential can be brought out on this challenging road will be another.

Now, as for the Calder Park Raceway: 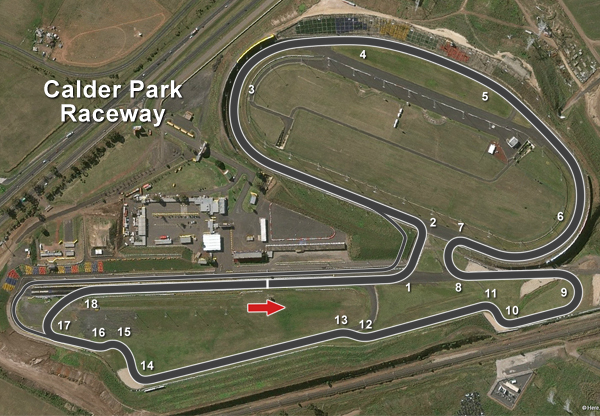 It’s gone through some legal challenges and funding issues recently, but remains available for events. A closed testing event like this one is not difficult to book, so making a track day of it would be the natural solution given that for many enthusiasts, that’s where they really want to take the car.

Therefore, for each and every car the–

##How is this judged?

First things first, there’s no winner. Your car will get a brief comment on each part of the itinerary, and one of my special pointy graph things with attributes that I haven’t yet decided. Then there’ll be an overall statement from Strop and team about what they think the car stands for and why it’s worth or not worth what it costs. There’ll be pretty coloured tables and stuff, you know what you usually get when you enter my things.

Also the cars will be compared against my own benchmarks: a GG original (Lilith, which is over twice the price so isn’t a benchmark), the Bellua, one from Armada (the Fore Gen V

If your entry falls foul of any of the rules above I reserve the right to turn it away or advise you on how to revise it, of course.

p.s. if you’re concerned you can’t enter because your car may be too cheap, just ask!

Note also that I haven’t even started looking at making those tracks, and won’t be done with them for at least a fortnight if not 4 weeks, so this will be a long time coming. If UE4 somehow replaces Kee engine build publicly before then, well, I’ll do my best to have all the data ready before that happens!

fuck me John, first responder and that’s what you open with

i’m giving him an opportunity on a silver plate to prove himself. i’m being as open and as kind as my shrivled, misanthropic heart can be.

Hm. Harris Motor Company doesn’t have much experience with this segment, as native Texas isn’t so inclined to mountainous terrain. Nonetheless, we commit to adapting and shall have a competitive vehicle ready.

Now, to build some lore…

Stryker, previously only known for it’s contribution to the World Rally Team during the BRC of 2014, is starting to put it’s technical know how towards new endeavors. While currently developing a car to compete in the Automation Compact Car Challenge the company may begin work on a new vehicle of an as yet undisclosed type. With almost all of the company’s experience being in motorsport where it excels at wringing every ounce of performance out of a car it will be an interesting challenge to build a more rounded, everyday type of vehicle.

Am I doing this lore thing right guys???

holy crap, you’re back! I haven’t seen you since we teamed up for WRT

I saw it was you who posted this so that’s a lot of why I thought I’d contribute. It looks like you’ve been having fun setting up challenges since then

Holy shit, it’s a you. I swear, I thought that something bad had happened to you.
Welcome back.

As for what Baltazar Automóveis will send in, it’s obvious. The Quasar RS325. 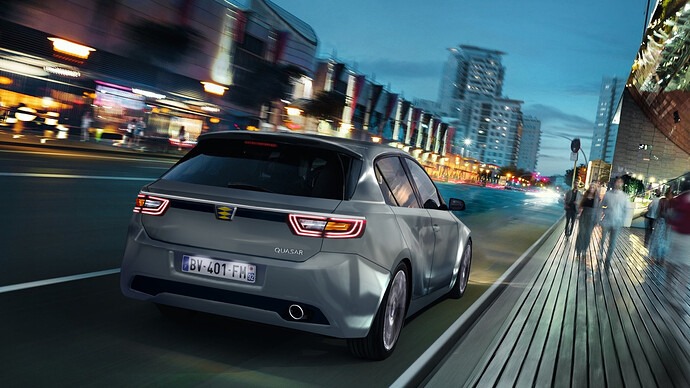 For the full stats and details on the Quasar, check the Baltazar thread.

#2018 Baltazar Quasar Hatchback [image] #####Credits to @titleguy1 for the photoshop After the very successful launch of the Quasar sedan in the North and South American markets, winning several accolades and prizes, it is time for the hatchback model to be launched. This model is aimed squarely at the European market, the main buyers of this kind of bodystyle. The car will also be sold around the globe, including North and South America, Oceania and East Asia. [image] Quasar 1.6T Lithium …

Hey Leonardo! Did you go by a different name then? I don’t seem to recall your username

Nah, I did take part on the brc, but on the whole I was just a lurker

no seriously I’ve been still going nuts on this forum for the last three years. You on the other hand seemed to have vanished, what happened???

This seems intresting… but which car to choose? RS specced Flare, Nova or Eruption? Cirrus? Ceres? Nebula even

2, 4 or 5 seats rules out the Nebula tho… Even if an RS specced Nebula would probably get down to 8:30 round the Green Hell

Can also be 3 seats, if you have that!

Life got a little hectic around then. My grandpa ended up in the hospital for several weeks and then passed away. He was 86 so he had a good run. It took up a lot of my time for a bit. After that I probably just started spending time on some other game. I’ve played this off and on since then but hadn’t made my way back to the forum until now. Lately I was remembering how much I enjoyed building a car for the BRC with you guys and thought I’d see if there were any new competitions.

Leonardo, you have a good memory to remember me three years later! I was pretty active in the private messages for a bit but I didn’t have many posts in the forum, then or now

I may have a 2017 refresh of a 2013 convertible I could bring out for the party… It’s a little bigger than the old car, but we will see if the mighty AluStar 8 can hold up against engines with likely far more cylinders.

The Rizun PPP is different from the Original Concept, as now there are mufflers, it’s safer, but has ended up weighing more. About 130kg more. Same as the concept otherwise. 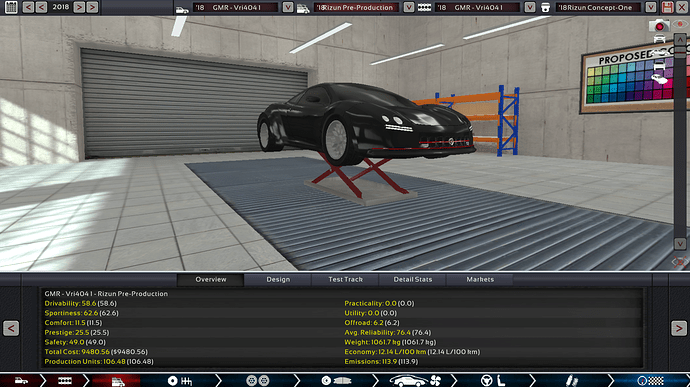 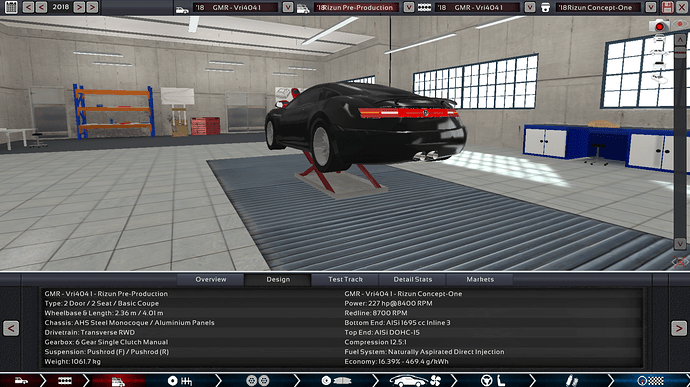 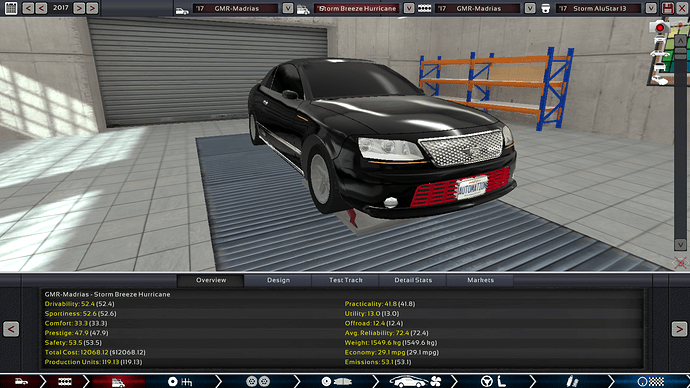 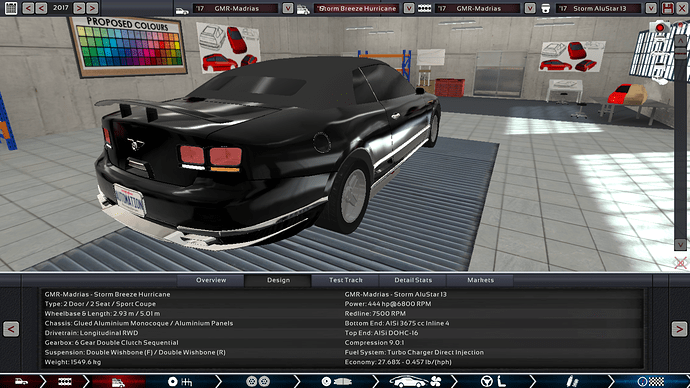 A rear-wheel drive sports convertible from Storm Automotive, based off of the 2013 Storm Breeze. The AluStar 8 was bored out and rebranded as the AluStar 13, increasing displacement to an effective 3.7L. The Hurricane trades rear seats in favor of two sports buckets and a turbo kit, with a 6 speed ShiftTronic II dual-clutch sequential transmission.